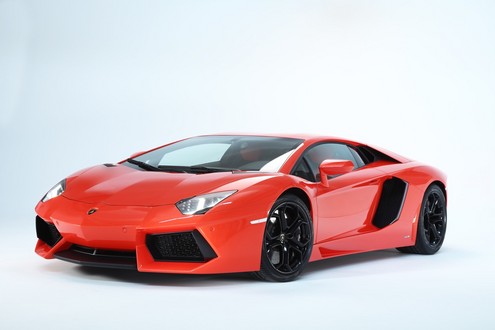 It’s not very often Lamborghini hits the reset button on its flagship V12 supercar. The Countach soldiered on for about a decade-and-a-half, while the Diablo and Murcielago that followed were produced for 11 and nine years, respectively. (Lamborghini’s original mid-engine missile, the Miura, was a comparative flash-in-the-pan with its six year lifespan.) Now the newest member of the family – the Aventador LP700-4 – is ready to take its place as the Italian nameplate’s flagship-of-record.

However, it’s one thing to read a car’s stat sheet (in the case of the Aventador, 691hp from the company’s first clean-sheet design road car V12, carbon fiber intensive construction and pushrod suspension at all four corners), but it’s another thing to see it in action. Kinda like the centerfolds in girlie magazines; sure they look hot, but they might have voices that sound like fingernails on a chalkboard made out of live cats, and might be absolutely convinced that everyone should attend a hairdressing college. So does the new Lamborghini Aventador measure up to all the adolescent (physically and/or mentally) males’ expectations based on the stage-lit and Photoshopped idealizations? Make the jump and judge for yourselves.

If you ask us, Italy’s board of tourism should work a lot closer with the country’s auto industry, based on watching these first two videos. Yeah, two Aventadors bombing down a two-lane rural road isn’t going to convey much info about history, culture or famous destinations, but have those same two Lambos roam the streets of Rome? Now you’ve got a video with something for everyone; women will be enticed by the Eternal City’s architectural beauty and romance, while their boyfriends and husbands will be smitten with those 6.5L V12s performing deep-breathing exercises and those funky Y-shaped LED headlight and taillight patterns. Get Ferrari, Maserati and Pagani in on the action and the airports will be swamped with stranieri eager to stimulate the economy. Everybody wins!

Of course, no one will win when the world ends…unless you happen to be driving an Aventador when it happens? Yeah, we aren’t completely clear on what this third video is trying to say, either. (Satan uses square nails? The smoke monster from Lost is afraid of orange?) We are sure, however, that the Aventador looks damn agile for a 3,400 lb. road ripper (and every inch a Lamborghini), and that VFX artists are to the early 21st century what Vaudeville magicians were to the early 20th century; that is to say, people who manage to help us escape our boring everyday existences by sending our eyes pictures that our rational brains deem impossible.

Of course, flooring the go pedal on a Lamborghini Aventador will probably have a similar discombobulating effect. It should go without saying we’ll happily volunteer to test that theory if Lambo volunteers a test car…