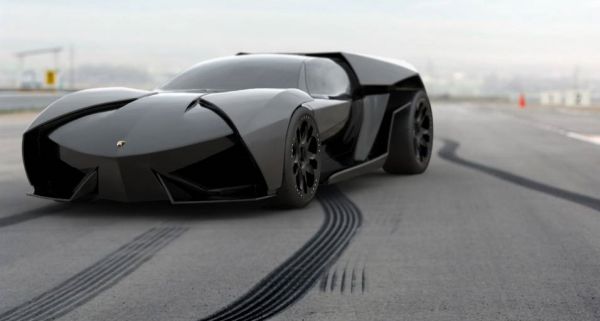 Last week, pictures emerged of the new Lamborghini Madura concept, a proposal for the upcoming hybrid model the company plans to release in 2016. Slavche Tanevsky, the creator of this concept, worked closely with designers at Lamborghini and Audi on this endevour. Now, he is introducing an even more aggressive concept that looks to elevate the current Reventon’s design to the next level. Known as the Lamborghini Ankonian concept, this mid-engine supercar has a far out look that would make the Batmobile jealous.

The Lamborghini Ankonian design study consists of a slimmer body style with a mid-engine mount and sharp angles. Special OLEDs are embedded between surfaces to serve as headlights. The name for the Ankonian comes from a bull famous for its black hair. Even though Slavche Tanevsky is an independent designer, this is no simple pipe dream.  As with the Madura concept, he received factory support from the pros over at Lamborghini and Audi who added their finesse on the project to create a finished design that is both polished and stunning.