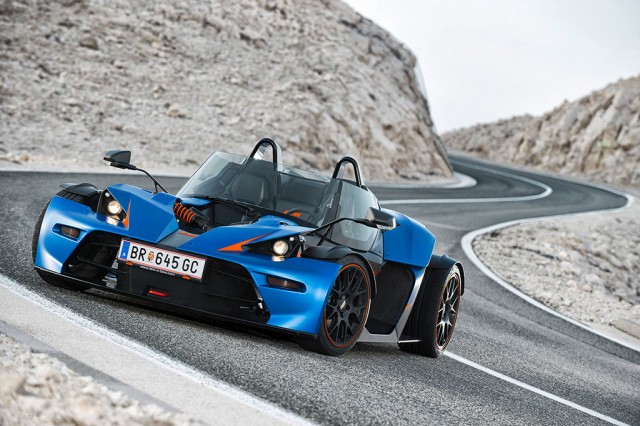 If the average performance car is like a chainsaw, the KTM X-Bow is like a pocketknife. It doesn’t have a tire-evaporating hellion of an engine, but it also doesn’t have such extravagances as full fenders, air conditioning, or a roof. It’s not quite as elemental as an Ariel Atom, but you certainly wouldn’t describe it as civilized.

However, KTM seems to be ready to give its slim-and-trim track toy some better table manners for those who want them. They plan to do this by way of the X-Bow GT, which is set to premiere at next week’s Geneva Motor Show. And even though a couple of the figurative edges have been softened, overall, it sounds like it’s still the same mid-engine wild child. 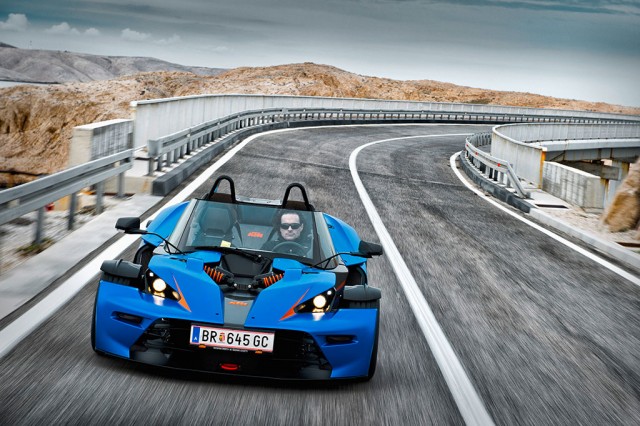 The bodywork (such as it is) is basically unchanged from that of the standard X-Bow. The angular front bumper, cycle fenders, twin roll hoops and full-width undertray are all carried over from the original. However, the coloring is different, predominantly blue with blue and orange markings on the sides of the passenger “tub.”

But that’s not the biggest deviation from the original recipe; that title goes to the tall windshield and side windows. The side windows swing open to serve as “doors” (though you still have to climb over the sides of the tub to get in), and the windshield is easily tall enough to keep wind, bugs and other airborne road hazards out of the face of both driver and passenger. However, there’s still no roof, so dress appropriately. 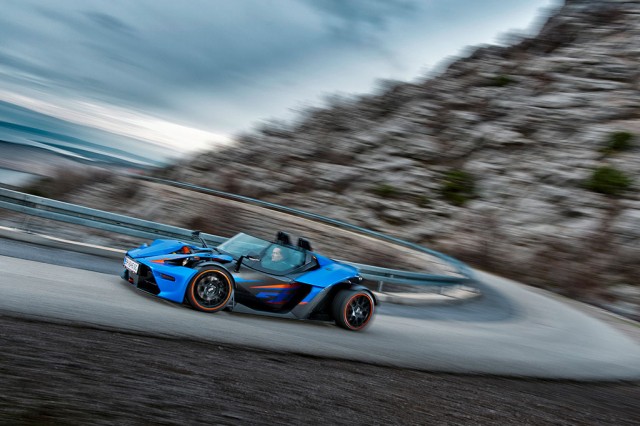 As for what’s powering this new variant of the X-Bow, KTM isn’t saying just yet. Presumably, it’s the current car’s Audi/VW supplied turbocharged 2.0L inline-four producing about 240hp. However, there is a rumor that the X-Bow GT could house the turbocharged 2.5L inline-five found in the Audi TT RS and RS3. Considering that engine makes 360hp in the U.S. spec TT RS, we’re hoping there’s more than a little truth to this rumor. Hopefully we’ll have more to report on the X-Bow GT – and all the other stars of the Geneva Show – next week.