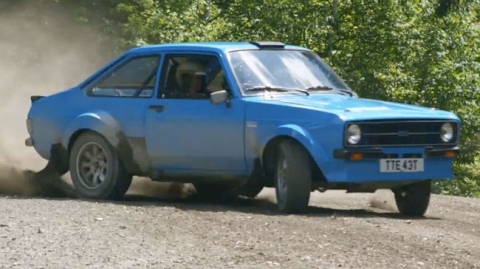 Ken Block is a man who likes to go fast, go sideways and have fun… Lately his escapades have escalated with the release of Gymkhana 2.1 with Rob Dyrdek and his recent antics at the launch of DiRT2. Now, we have some footage of Ken and WRC pro Chris Atkinson at Team O’Neal’s Rally School in New Hampshire having a blast ripping up roads in an old school Euro-only-spec 1978 Ford Escort MK2.

No surprise here, but Block actually owns this ride, which he uses for practice and will be showcasing at various events such as Rally Defi. This vintage Ford features a 4 pot Millington engine putting out 280 BHP mated with a sequential gearbox operated by paddle shifters. The Escort was converted over from right-hand drive to left.

Both Ken Block and Chris Atkinson are used to driving Subaru Imprezas (which supply power to all four wheels) and don’t have tons of driving time pushing around RWD cars, so it’s a awesome to see them tearing it up in the Escort.

All of the crazy joy rides aside, Block will soon have to get serious when he returns to the Rally America National Championship Competition in just a few days. The first event is Rally Colorado starting Sept. 19th. For now, check out this pretty cool video…