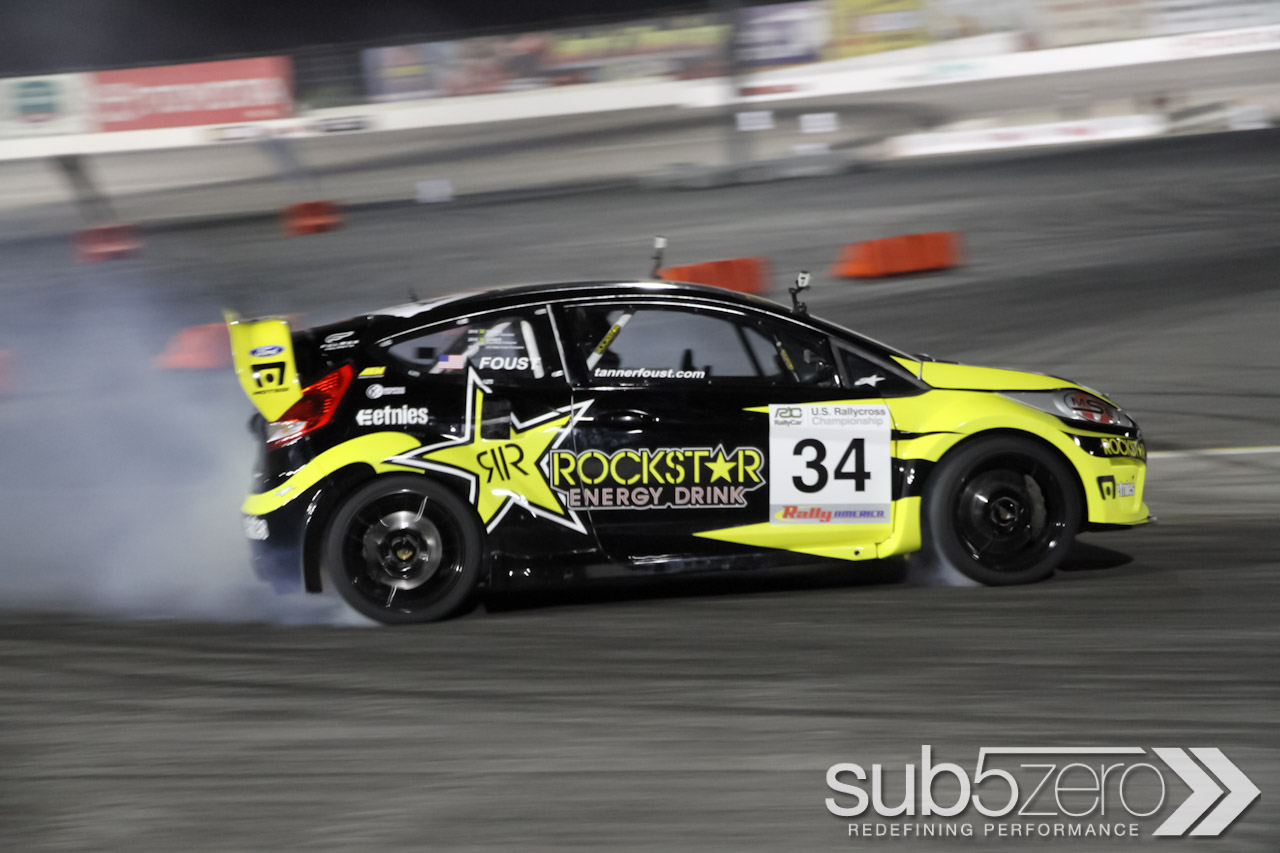 When the nameKen Block is mentioned, the word awesome comes to mind. So when he sets up his own driving event, you know it’s going to be good. On Saturday December 4, 2010, the Gymkhana Grid series made its first appearance at Toyota Speedway in Irwindale, CA.

First let’s get a bit of background on Ken Block and Gymkhana. Ken Block is a decorated rally car racer, and co-founder of DC Shoes. Participating in various extreme sports over the years, Block truly found his niche in rally racing. So what is Gymkhana anyway? 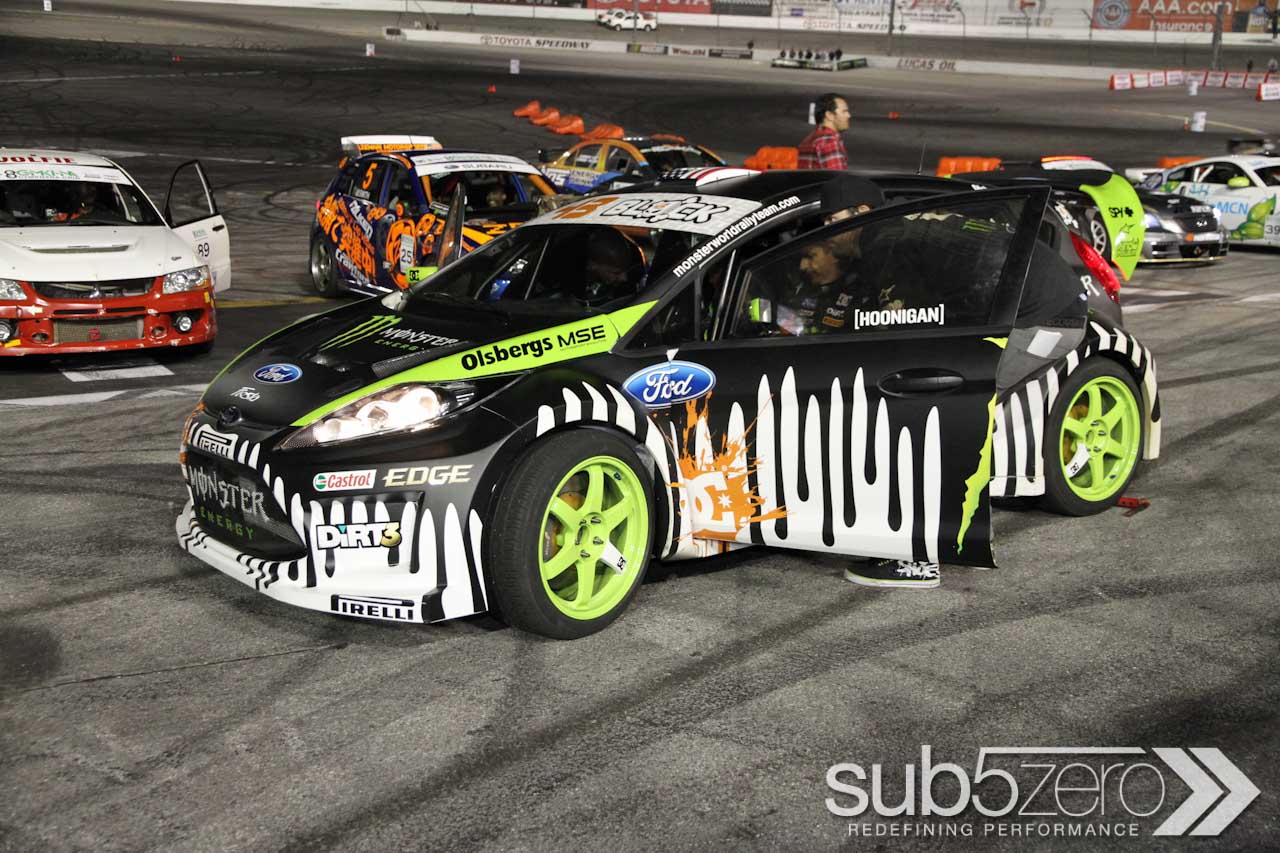 Gymkhana is a Hindu based word, meaning a place or gymnasium where skilled competitions are held. Since the meaning of a word is always open to interpretation, Ken Block, DC Shoe Company, Monster Energy and various other sponsors decided to apply it to racing. When Ken Block’s first Gymkhana driving video hit the web, it took YouTube by storm. The rally racing mastermind turned an abandoned airport into a gigantic obstacle course of tire spinning mayhem! The first time I saw the video, I replayed it at least 5 times! I’d never seen anyone handle a car the way that Block did in that video. Well, after the first video did so well, Ken worked with his sponsors to create 2 more equally successful videos (Gymkhana 2 & Gymkhana 3).

As a result of his video success, as well as his popularity in the racing world, Ken Block created his own racing series know as the Gymkhana Grid. In this competition, drivers go against each other in mirrored courses which are a mix between drag racing, slalom and drifting. Each course is very complex and is only meant for the best of the best. The first event occurred this past summer at Hollywood Park in Inglewood, CA. The event was open to the public, which allowed just about anyone and any car to take a spin through the nail biting course. 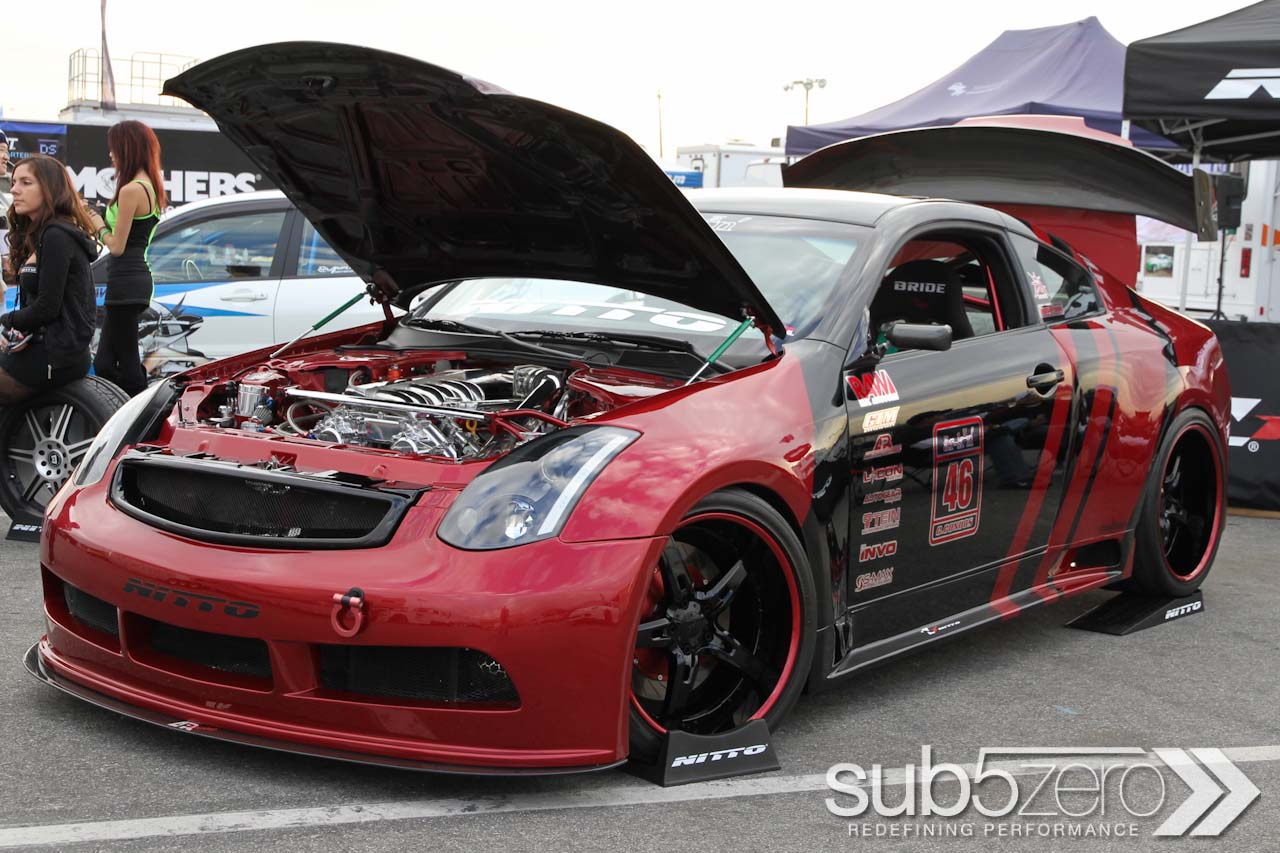 So now let’s jump ahead to last Saturday’s main event at Irwindale. As we arrived at Toyota Speedway, you could hear the competitors making music with their cars as they tapped their rev-limiters, practicing on the track. The smell of burnt, high octane fuel was in the air, and the parking lot was full of cars owned by real enthusiasts. Making our way through the entrance, we made our first stop at the car show, Mass Appeal, behind the track. 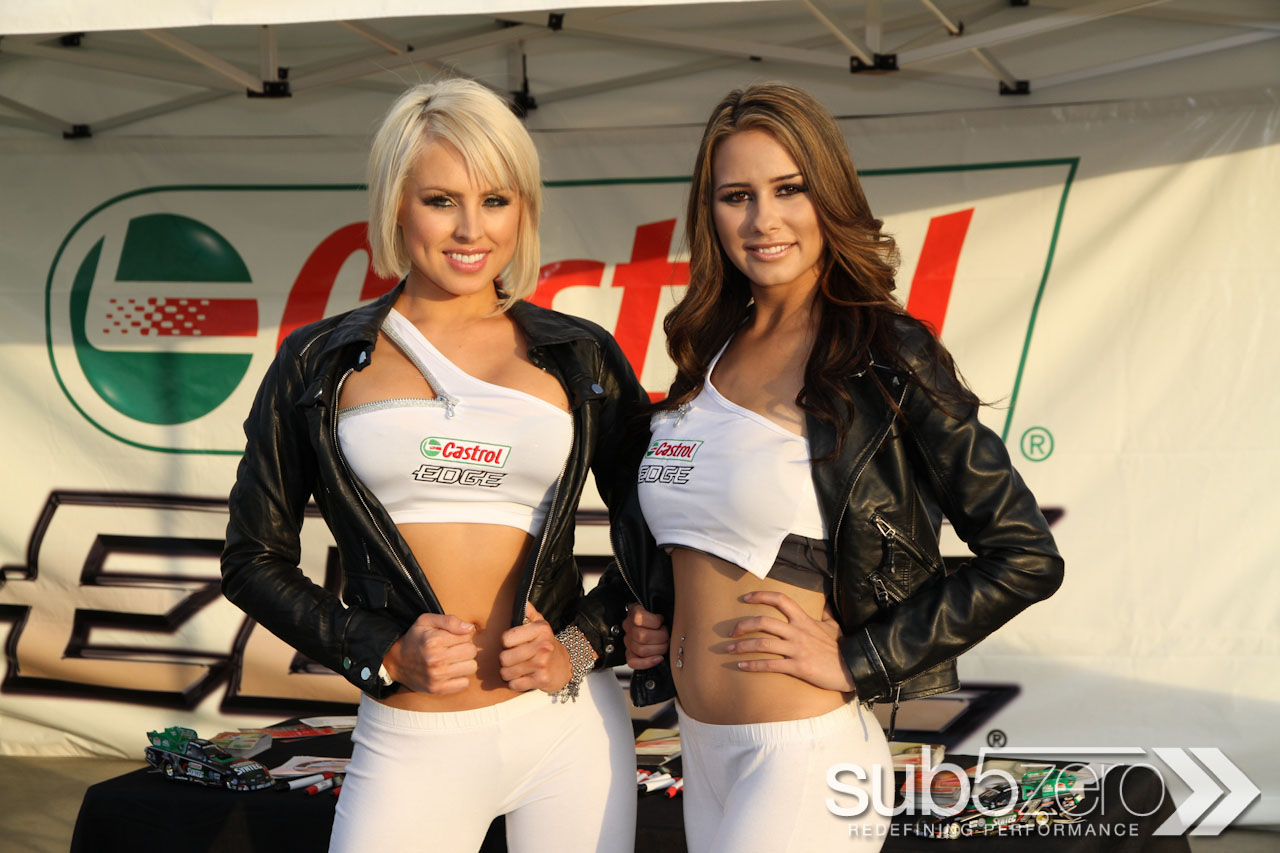 However, this was a bit different then all the other car shows I’d been to this year. A significant number of the cars displayed were competing in the day’s events! While I enjoy looking at beautiful paint jobs, crazy sound systems and really expensive wheels, I’d much rather admire cars that were built to race! The event was primarily taken over by JDM cars, with a few European beauties and their American counterparts. In the mixture of all the awesome rides, there was a nice variety of beautiful modelsthat kept me smiling all day. 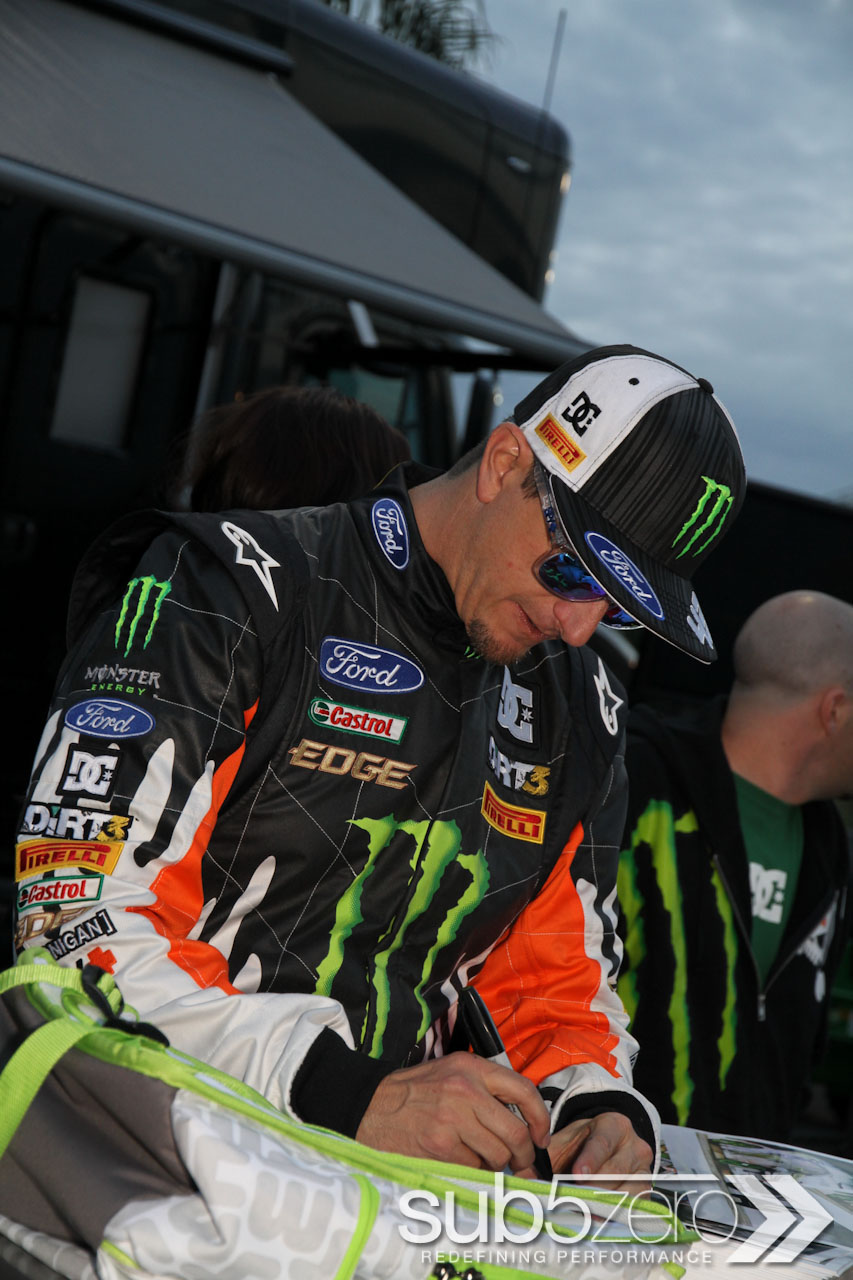 Because this was a smaller event, it was more personal. Ken block could be seen running around the event, signing autographs, and taking pictures. As the preliminary runs began, I made my way to the track to see how the cars and their drivers were handling the course. A few drivers had some trouble with the course, but the majority of them were getting better at each and every run.

When Ken Block made his first run, I was utterly amazed to see how fast that monstrous Ford Fiesta was in person. I was also speechless as I saw Block master the course from such close proximity. I figured no one could beat Block at his own event. Just then I saw Tanner Foust show up in his own Rockstar and Etnies sponsored crazy AWD Fiesta. This made things a bit more interesting, and left a bit of doubt in my mind about Block’s guaranteed victory. 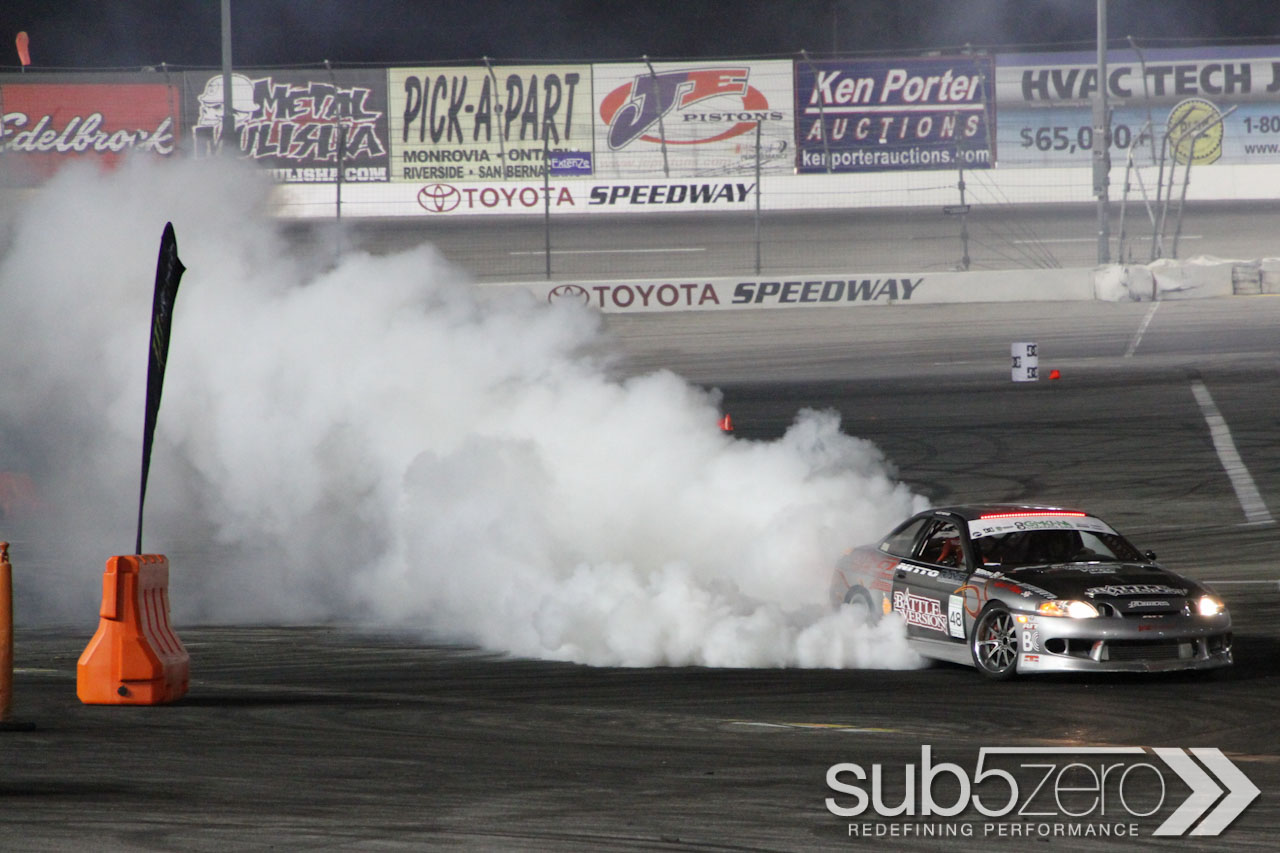 Throughout the day, the RWD (rear wheel drive) and AWD (all wheel drive) drivers eliminated each other round by round, in the best 2 out of 3 competition. There was even a free-style burnout competition which a blast to watch! Michael Essa won that event, in his M5 V10 powered e92 3 series coupe. Unlike some of the fancy sliding that some of the other drivers performed, Essa just held the wheel at wide open throttle, shooting fireballs from his exhaust and made massive clouds of smoke by tearing up a new set of Nitto tires. 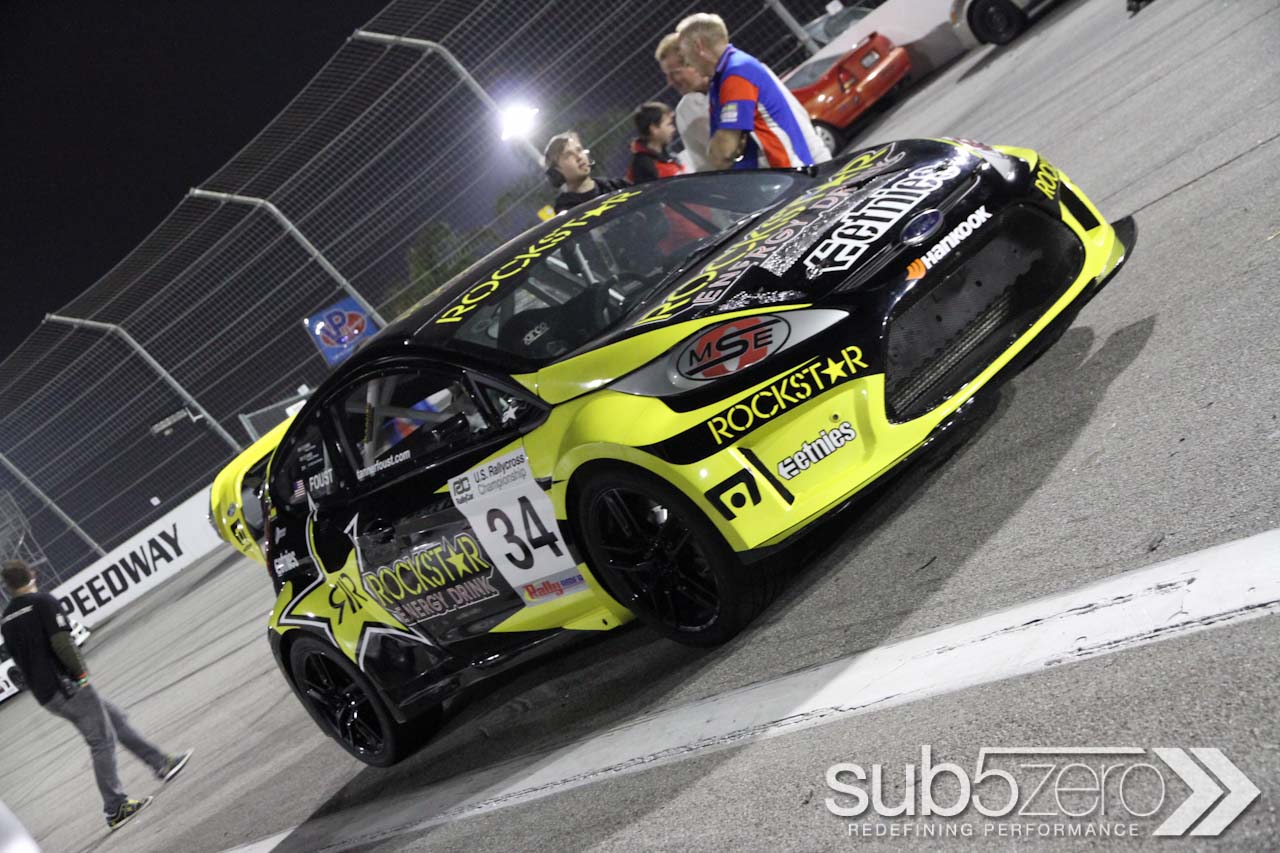 The two finalists of the night were none other than Ken Block himself, and the masterful Tanner Foust. Tanner Foust took a close win in round 1, despite a penalty for hitting a cone in the slalom area. Block had to win round 2 in order to qualify for a tie breaker round, but he failed when he hit one of the barrels on his second run. It was pretty ironic to see Block get beat at his own event, but Foust was indeed the best driver of the night.

I had a great time at the event, and I hope it will gain popularity for the next competition. This series has a lot of potential and is more fun to me then simple auto-X or even drifting. I love the mixture of the course; there’s just enough of each element to keep everyone happy. The crowd turnout wasn’t that great and the event could have been organized a bit better. Hopefully Ken Block and his team took some notes, and will use them to make their next event that much better!