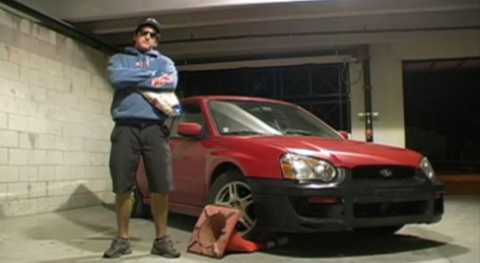 We all know how awesome the Gymkhana Practice Video and Gymkhana Two Informercial are from Ken Block. And it was only a matter of time before a spoof video was released, but oh man, what a job the folks at IMV Films have done! This thing is part jackass, part wanton-abondonment for-public-safety and pure fun from start to finish. These guys have it all — paintball shooting, fireworks dodging, train track jumping, loads of moving violations, baby smashing and trailer destroying — with lots of “dynamic” driving thrown in the loop.

IMV Films prove that you don’t need a Crawford Performance 530 whp car, a high-end production crew and an entire airfield to make a hype video. Just a beat up WRX Impreza, a couple of sets of tires and a creative imagination is all that’s required. If you like this kinda stuff also peep Vehicular Lunatics or Team Tork and the Scumballers from the same production shop. Anyhow, check out the Gymkhana Spoof video after the jump: