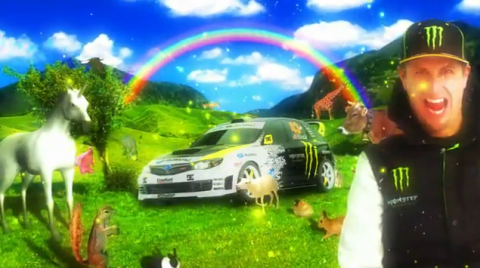 You knew Ken Block was going to close out 2009 with something special, and something special has cometh. The DC Shoes marketing squad has unleashed four new videos to dazzle, delight and disrupt your brain cycles. Both the Gymkhana 2 Director’s Cut and Block vs Pastrana: Game of Suck Highlights are entertaining rehashes of content we’ve seen before, but they are just as exciting as the first go-round. While the 2008 Season Highlights video is pretty captivating, we would have liked to have seen some more recent footage, except Ken Block didn’t compete too much in 2009.

But the real coup d’état here is the psychedelic, tripped out ride he takes us on in the Artist Remix of Gymkhana Two. No spoilers here, but if you want to throw on the Grateful Dead and pop a tab before you hit play you won’t be disappointed. There are quite a few product placements intimately woven into the 6:40 clip, along with some second rate movie special effects and enough randomness to have you scratching your head a few times, but somehow it just works. Check out all four videos out after the jump: