Kazunori Yamauchi Emerges from His Bunker, (Kinda) Breaks His Silence on Gran Turismo 5 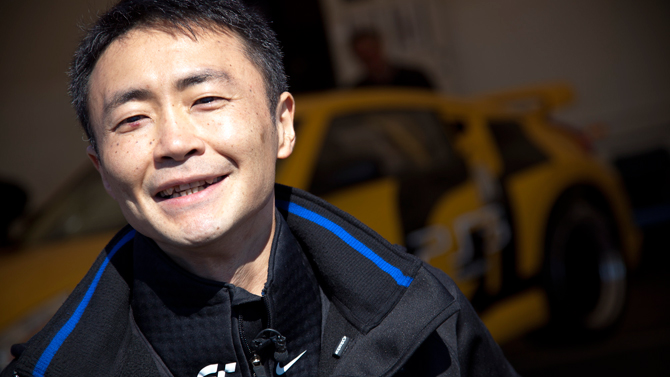 Fans of the Gran Turismo franchise are a bit like people who piss-off their spouses: They encounter lots of silence, lots of withholding, and are driven to do a fair-bit of hand-wringing and soul searching. Of course, GT fans have never said something like, “I would totally ask your best friend out if you died. I mean, I would after I mourned you for a long time! Honey? Why are you walking away? You said you wanted an honest answer!” to their favorite racing game franchise (and if any have, we hope the nice men in white coats have put them up at their finest padded suites); they’ve just learned to expect rumored release dates to be exactly that and for features to be pulled at the eleventh hour of production (*cough*Online play in GT4*cough* Sorry, frog in our throat…). And they’ve definitely learned to expect cryptic, side-stepping answers from the series’ daddy, Kazunori Yamauchi.

Of course, when he does decide to speak about his baby, a whole mess of people from both the automotive and gaming worlds drop what they’re doing and take a listen. Such was the case at the Snetterton race circuit in England a couple weekends ago, when Yamauchi was attending the GT Academy finals that saw 21-year-old Frenchman Jordan Tresson beat out 26-year-old Italian Luca Lorenzini for a drive in a race-prepped Nissan 370Z in this year’s European GT Cup series.

Yamauchi talked with at least two media outlets while at Snetterton, Auto Express and Top Gear (the magazine, not the show). Yamauchi told Auto Express’ Dean Gibson that Gran Turismo 5’s release date is not what he “would be hoping for.” Does this mean the slip of the game’s March 2010 release in Japan is Sony’s doing? Kaz didn’t make it crystal clear, though he did admit that releasing it then would have meant some stuff would have had to be omitted. And he also seemed to reiterate that Porsche is once again a no-go for the GT series, though if previous installments are any indication, there will be plenty of Rufs to keep fans of trunk-mounted German pancake sixes amused.

As for his Top Gear interview, Kaz revealed he currently has a Ford GT, a Porsche 911 GT3, and a Nissan GT-R (among other rides) in his real-life garage at present. He also recalled how he and his team spent three or four days at Top Gear’s famous test track taking photos, measurements and other data. He even did a few laps with the Stig riding shotgun, though he admitted he wasn’t even close to matching the mysterious white suited being’s pace around the former airfield’s runways and taxiways.

Still want more new news? Well, that’s kinda it, though you can read more in the full articles here and here. Also, the big E3 gaming industry shindig in L.A. is about a month-and-a-half away, and if GT5 is indeed dropping this year, it will have a pretty significant presence at the show. Until then, try not to drive yourselves loco dissecting every syllable of every Yamauchi soundbite, mmkay?