JMS Audi A8 is Used and Improved

The second-generation Audi A8 (produced from model year 2003 to 2009) is a pleasingly-styled full-size luxury sedan that, thanks to the kind of apocalyptic depreciation that is part-and-parcel of late-model German luxury cars, is now actually quite cheap to buy and own…until some cocktail-weenie-sized underhood widget that costs $8,000 and is needed to put the transmission in gear craps the proverbial bed, anyway. But if you’re a glass-half-full kind of pre-owned Teutonic luxobarge buyer and would rather spend money on personalizing your big alloy Audi rather than saving up for the pretty-much-inevitable pricey component failure, a German company called JMS Fahrzeugteile (“JMS Vehicle Parts” in English) has a new bodykit for this not-new luxury sedan that may interest you.

The new front spoiler extension (which fits over the stock bumper), side skirts, rear bumper skirt and rear lip spoiler make the A8 look more muscular than even the contemporary S8 and, priced at about $1,450, the whole ensemble won’t break the bank. However, if you also want the 20” Oxigin wheels and KW DLC suspension kit seen here, be prepared to add roughly $3,100 and $1,500 to the tab, respectively. And if you still have some scratch leftover, JMS will sell you speed parts like a sports exhaust system, a remapped ECU, and something called a “speedpedal” that sharpens throttle response. 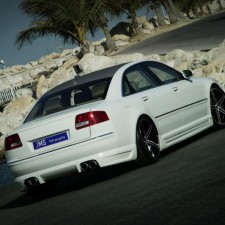 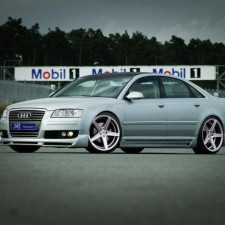 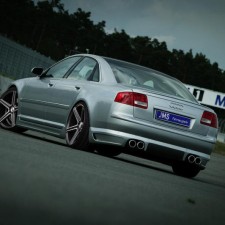