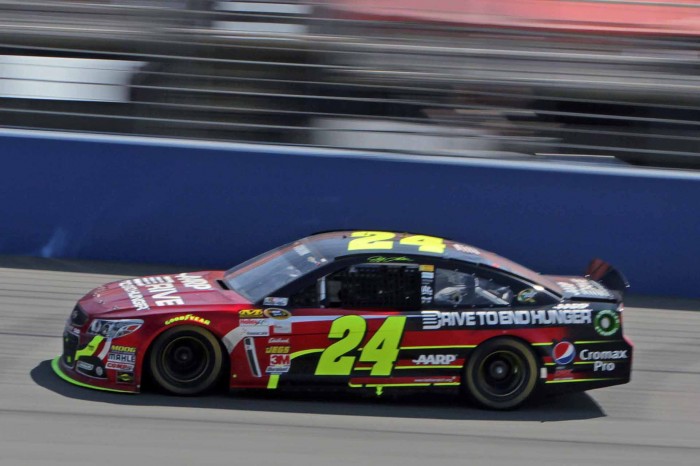 There’s always an air of disbelief that comes when someone who has been at the highest level of his or her profession announces that it’s time to ride off into the sunset. But it’s particularly surprising in the case of NASCAR star Jeff Gordon, who announced today that the upcoming 2015 Sprint Cup Series season will be his last as a full-time driver; we’re old enough to remember parking our posterior in front of the cathode ray tube to watch Thursday Night Thunderand Saturday Night Thunder on ESPN and see him tear it up on dirt and paved short tracks across America in the USAC National Midget Series in the late 1980s and early 1990s. This mullet-and-mustache-rocking teenager from the NorCal town of Vallejo would spank drivers well over twice his age on a weekly basis. So the fact that he’s calling it quits (though he’s refusing to use “the ‘r-word’” to describe what he’s doing) makes us feel just-this-side-of-ancient.

Now, we’re absolutely certain that some of you are saying, “Big-flippin’-deal, a guy that spent almost his whole career turning left is going bye-bye,” or something to that effect. Well, let’s take a look at Jeff Gordon’s NASCAR Sprint Cup stats: Four championships (1995, ’97, ’98 and ’01). Ninety-two race wins, which puts him third all-time behind only David Pearson (105) and Richard Petty (200). Seventy-seven pole positions, also third all-time. Three Daytona 500 wins. Five Brickyard 400 wins (including the very first one in 1994). Tied for the most wins in a single post-1971 season (13 in 1998). And he was named one of NASCAR’s 50 Greatest Drivers in 1998, just six years after he began his stint as a full-time Cup driver. “Yeah, but, but…ovals! Not real racetracks!” Okay, Mr. Snobbypants, how about this: There was period of a few years in which Gordon won seven consecutive races at the only two road courses NASCAR’s top division visits (Sonoma and Watkins Glen). He was also part of the team that finished third overall in the 2007 Rolex 24 at Daytona (his first and, so far, only appearance) and, as you’ll see below, he did just fine in Juan Pablo Montoya’s Williams-BMW FW24 Formula 1 car when the two swapped rides at Indianapolis in 2003.

Gordon and Rick Hendrick, his close friend, business partner and the only car owner Gordon has driven for in the Cup Series since his debut in the 1992 season-ender at Atlanta, aren’t saying what his specific plans are after this season, other than spending more time at home with his Belgian supermodel wife Ingrid and their two kids. Also unmentioned as yet is who will take Gordon’s place on Hendrick’s four-car Chevrolet team though, if it’s someone other than Hendrick Motorsports development driver and 2014 NASCAR Nationwide Series champion Chase Elliott, we’ll eat a Dixie cup. Whatever the future holds, we hope the 2015 season holds a fifth and last Sprint Cup Series championship for the 43-year-old Gordon. After all, he’s arguably been snookered out of enough championships since the “Chase” playoff format was introduced in 2004 (including last year) that his luck is probably due to turn around.