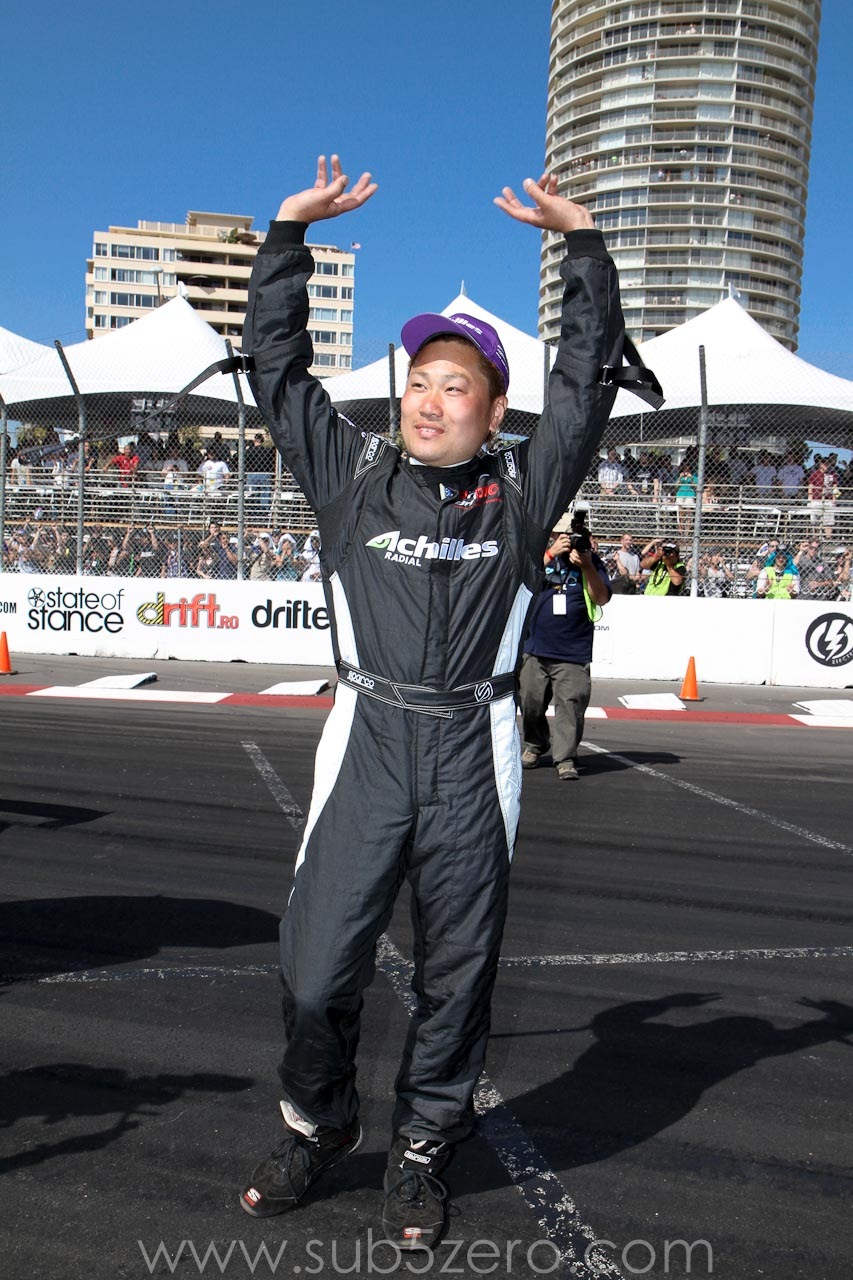 Many professional racing drivers and drifters, prior to hitting the bigtime, have had to hold down “normal” Monday through Friday jobs. Typically these 9-to-5 vocations are at least tangentially automotive-related (e.g. mechanic or taxi driver), but not always. Some work in food services, some work in retail, and still others work in education. NASCAR star Carl Edwards used to be a substitute teacher, 1983 Indianapolis 500 winner Tom Sneva is a former school principal, and pro drifter Daigo Saito has worked for a nursery school.

Never heard of Daigo Saito? Not too many Americans have, though it must be said even fewer had prior to this past weekend. You see, Saito – the 2008 D1 Grand Prix and 2011 Formula Drift Asia champion – didn’t just participate in his first American drifting competition in the Formula Drift season opener on the Streets of Long Beach; no, he finished on the podium, finishing ahead of many of the U.S. drift scene’s biggest names. Makes you want to know more about this guy, doesn’t it? Your wish is our command. 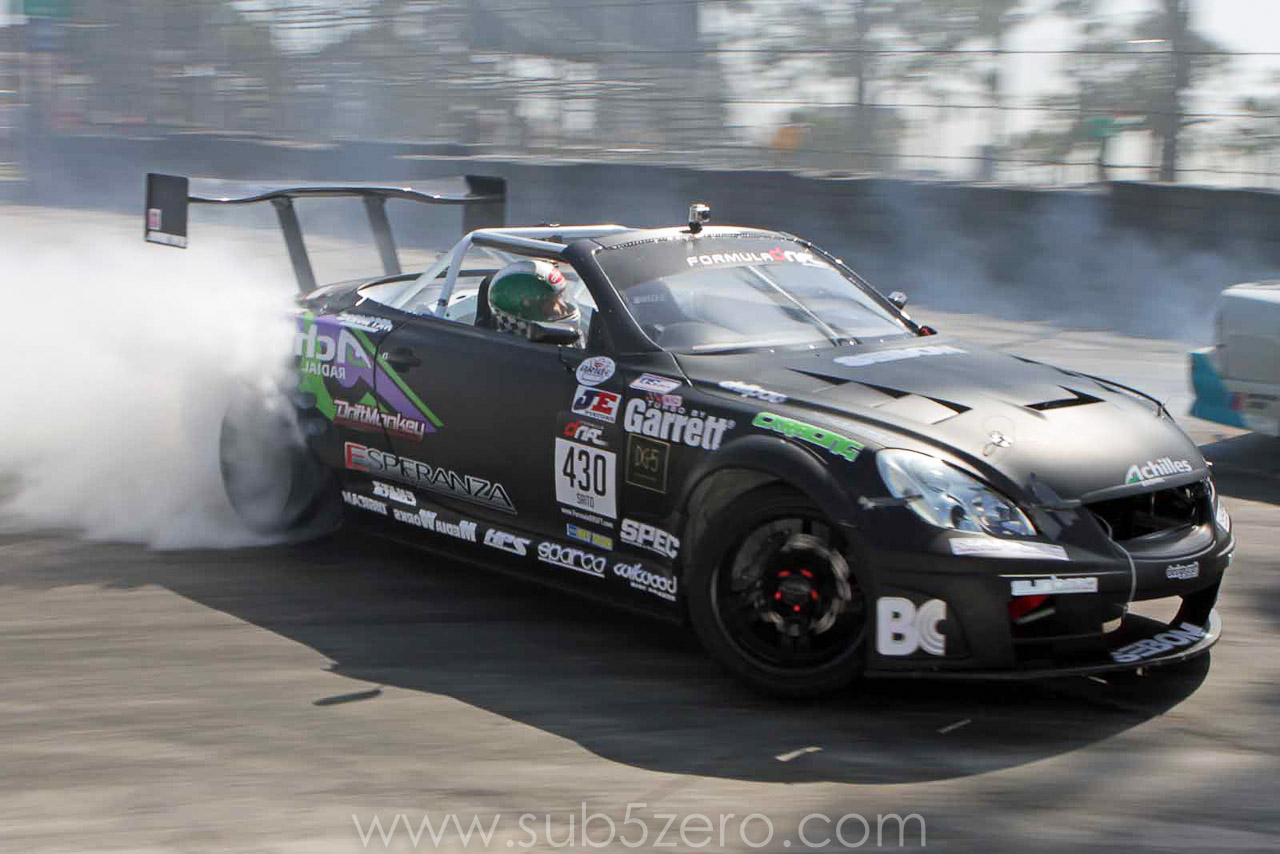 Born in Japan’s Saitama Prefecture (which encompasses the northern outskirts of Tokyo) on March 7, 1980, Saito quickly picked up his father’s love of motorcycles. When he reached the age of 16, Saito earned his motorcycle license and got a bike. One night, he and his friends rode up to the hills near Karuizawa; it was there that they stumbled across an underground drifting meet. Saito recalls there being the usual Nissan Skylines and Silvias and the like, but the car that he remembers the best, by far, was a white Mercedes-Benz sedan. The image of that big German import hanging the tail out with those smaller, more nimble domestic cars would have a direct effect on the types of vehicles Saito would later drive in competition.

However, Saito-san the Elder wouldn’t stand for his son taking up drifting (especially since he was the top badminton player at his high school at that time), so he bought him a Mini Cooper as his first car. Daigo didn’t know at the time that drifting a front-wheel-drive vehicle like a Mini is next-to-impossible, so when he tried to get it sideways, the result was, predictably, one wadded-up Mini. In need of a new ride, Saito went behind his parents’ backs and picked up a S13-series Nissan Silvia (exposed headlight JDM cousin to the first-gen 240SX that was offered here), one of the most popular starter cars for aspiring drifters. 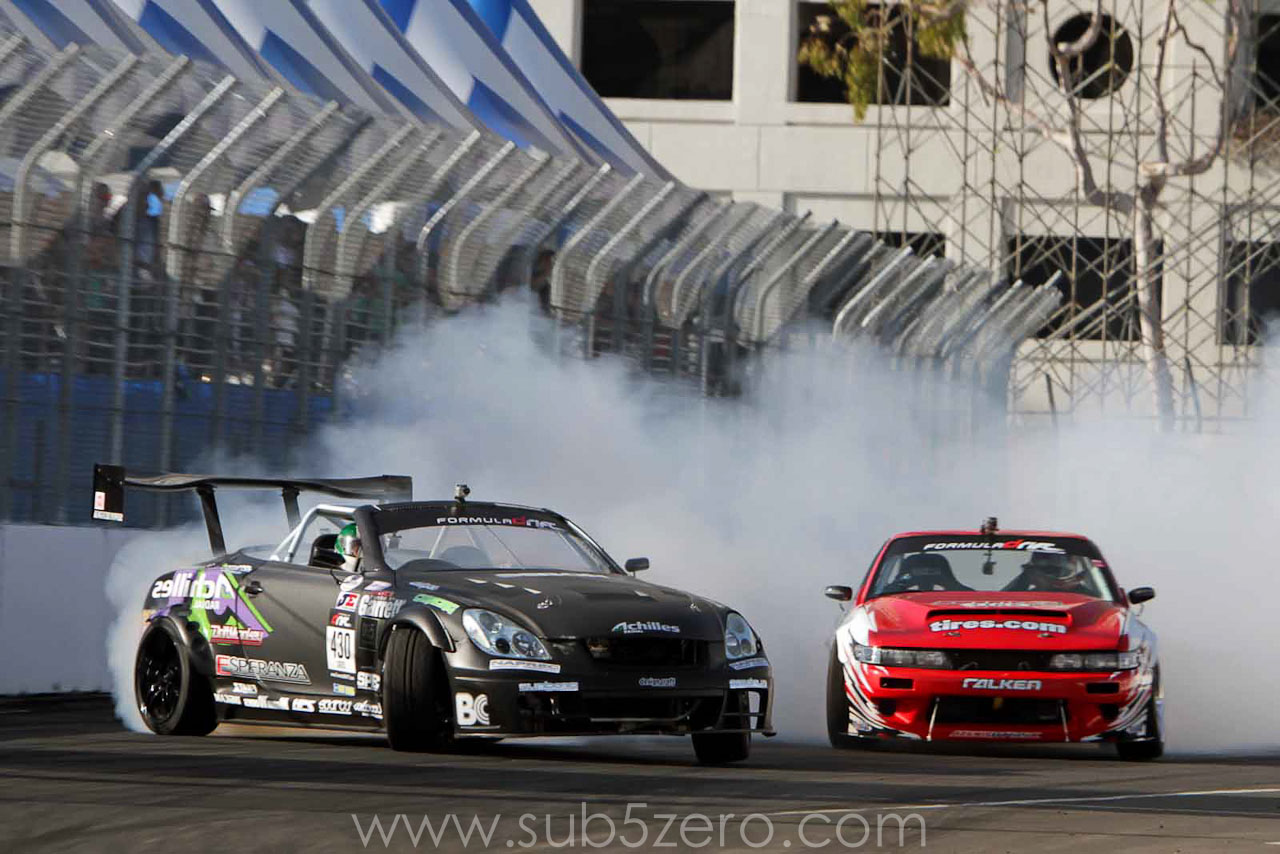 However, this new car provided another bump in the road for Saito: The S13 he purchased was a Silvia Q’s – the normally-aspirated version – rather than the turbocharged Silvia K’s. That meant less-power and, consequently, harder to get it (and keep it sideways). But Saito persevered, practicing his craft in one turn…for 36 hours. Granted, Saito took breaks to eat, and refuel his car, but other than that, it was a day-and-a-half of sliding through the same. Damn. Corner. But that marathon test session did make him a better drifter (though he later wrapped the Nissan around a tree).

But as good as he was, Saito didn’t really consider going pro…until a friend asked him why he didn’t. Saito decided to take the plunge and enter the third round of the 2004 D1 Grand Prix season. The nursery school animal wrangler (The school’s menagerie includes rabbits, guinea pigs, roosters and dogs.) and bus driver and his scarlet red Toyota Mark II (a rear-drive sport/luxury sedan that’s a couple inches smaller in each dimension than a current Camry) quickly became a force to be reckoned with on the D1GP circuit. He quickly earned a reputation for having a ballsy yet still fluid driving style, perhaps best typified by this jaw-dropping run in the wet at Ebisu in 2008, a run that earned him 99.9 out of a possible 100 points.

Three years later, Saito narrowly missed out on his second D1GP title, but he did take the title in the Formula Drift Asia series. And he won the championship in convincing fashion, winning all three rounds in the Achilles Tire-sponsored Toyota Altezza (a.k.a. first-gen Lexus IS). No sooner did Saito grab the Formula Drift Asia championship than rumors began to circulate that he would be making the trip across the Pacific and run the Formula Drift U.S. series in 2012. The rumors were confirmed as fact last December: Saito would be joining Bridges Racing Team with support from Achilles Tire…and Saito would be building a new car. (He’ll also run the full 2012 Formula D Asia series in a new Lexus IS hardtop convertible, and a partial D1GP season in his tried-and-true Mark II.)

As is befitting of a drifter that seems to have a luxury car addiction (one that Saito admits is rooted in seeing that white Mercedes in Karuizawa all those years ago), the new car is a Japan-market Lexus SC430. The car was actually flooded and banged up in last year’s tsunami, meaning Saito was able to buy it for about $3,000 U.S. Naturally, he removed much of the interior and other bits, and replaced the stock 4.3L V8 with a Toyota 2JZE turbocharged inline-six that’s been stroked from 3.0L to 3.4L and is putting down an estimated 1,200hp. (What’s the Japanese word for “Yowza?”) There are also huge fender flares front and rear, and a downright monolithic rear wing. 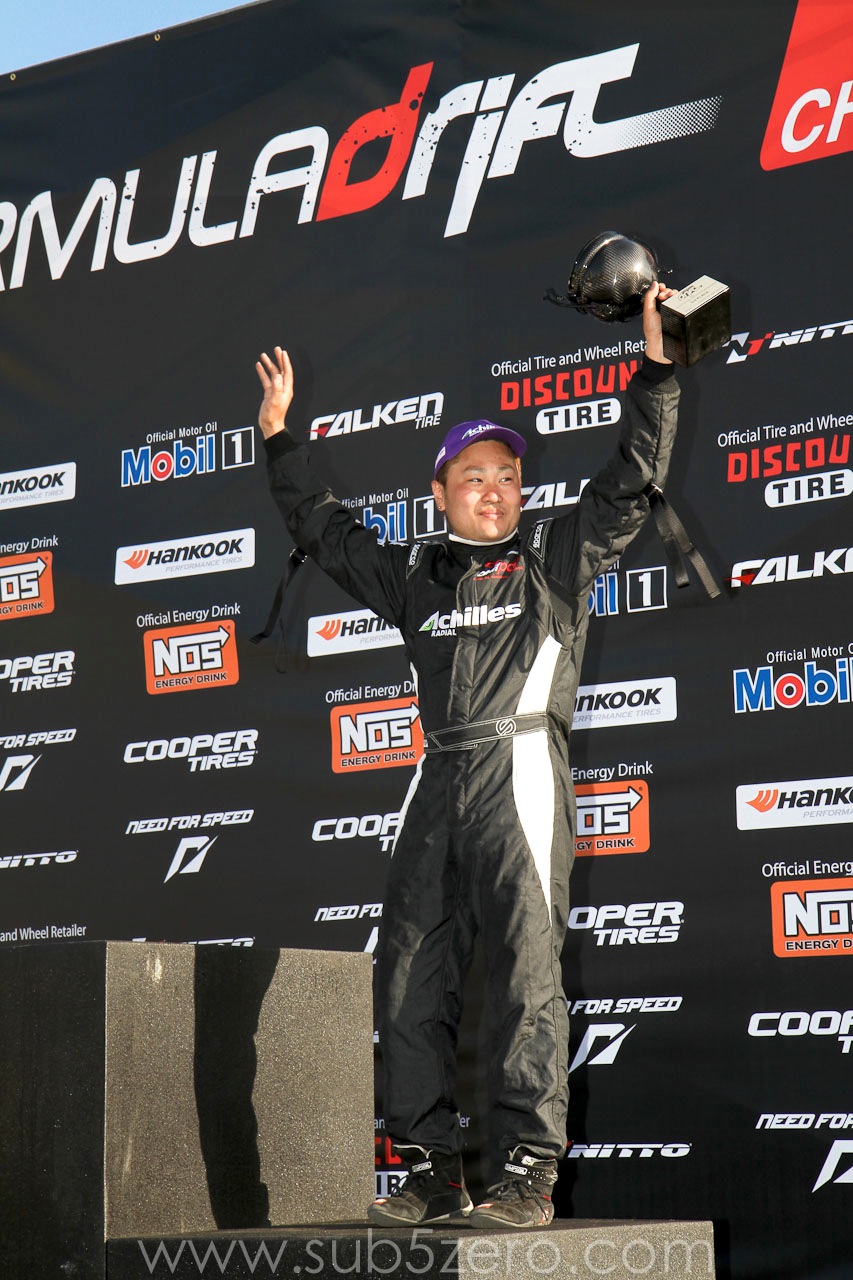 After shipping the car stateside, its first competitive outing was the Formula Drift opener on the sun-drenched Streets of Long Beach. But rather than falling victim to new car gremlins, the flood victim Lexus carried Saito to third place in the final results, ahead of established Formula D stars like Ken Gushi, Rhys Millen and Vaughn Gittin Jr. A major reason for Saito’s success was the massive quantities of smoke those roasting Achilles hides were making, something that Saito’s legions of Japanese fans are quite used to, as you can see below.

If he can keep up this form for the rest of the season, the 32-year-old with the mellow demeanor and big black convertible will be a serious threat for this year’s Formula Drift crown. But even if that doesn’t pan out, you can bet you’ll still be hearing Daigo Saito’s name a lot in the coming months.