Icon Motorsports Limiter Kawasaki ZX-14R is Long, Low and the Opposite of Slow

In the world of superbikes, you can’t get much more super than the Kawasaki Ninja ZX-14R. Its fire-breathing 1,441cc inline-four and wind-tunnel-honed bodywork allow it to reach its artificially-capped 186 mph top speed with absurd promptness and ease. And at a base MSRP of $14,999 new, it has an oh-sh*t-per-dollar ratio that is arguably unmatched by anything else on wheels.

Even so, the folks at Icon Motorsports (which is both a tuner and maker of riding gear) felt the ZX-14R wasn’t radical enough. Which probably explains why the company assembled the pavement-hugging hellion you see here: The Icon Limiter ZX-14R.

While the vivacious green, white and blue color scheme (reminiscent of the one Kawasaki applied to its high performance street bikes and racing bikes in the late ‘80s and early ‘90s) is probably the most obvious cosmetic modification, Icon Motorsports certainly didn’t stop with it. The stock windscreen has been replaced with a translucent green one from Hotbodies, the headlights have HID internals from PIAA, the controls are from PSR, and there’s an incredibly cushy looking new seat from Saddlemen. Additionally, the stock wheels are replaced with Performance Machine pieces finished in Kawasaki green to match the body and wrapped in Dunlop tires.

As for stopping power, both wheels are fitted with Galfer “petal” brake rotors. And you’re going to want to have plenty of stopping power on hand, for the K&N air filter and Leo Vince SBK exhaust system mean that fuel-injected four-banger is now making comfortably more than 200 horsepower. Meanwhile, Öhlins suspension at both ends and an extended rear swingarm from Roaring Toyz endow the bike with that killer long-and-low stance. 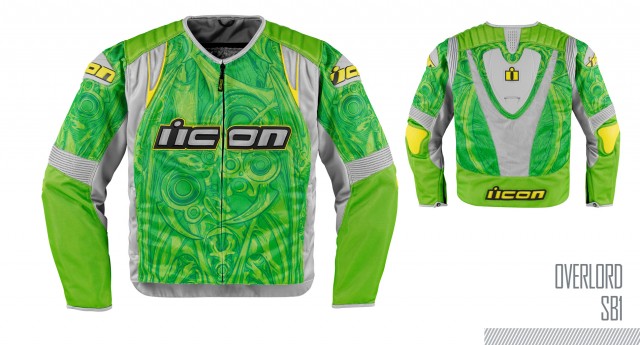 And in case the bike itself isn’t badass enough, Icon Motorsports also offers a matching jacket and helmet (named Overlord SB1 and Airmada SB1, respectively). Whether or not people will be able to see you long enough to notice that coordinating safety gear as you zoom by is, of course, up to you… 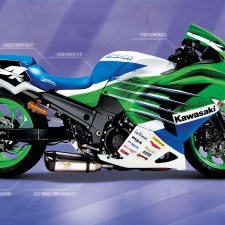 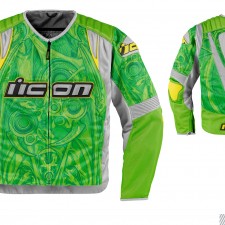 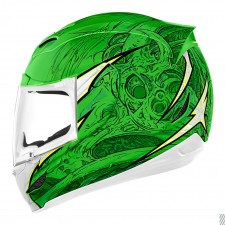