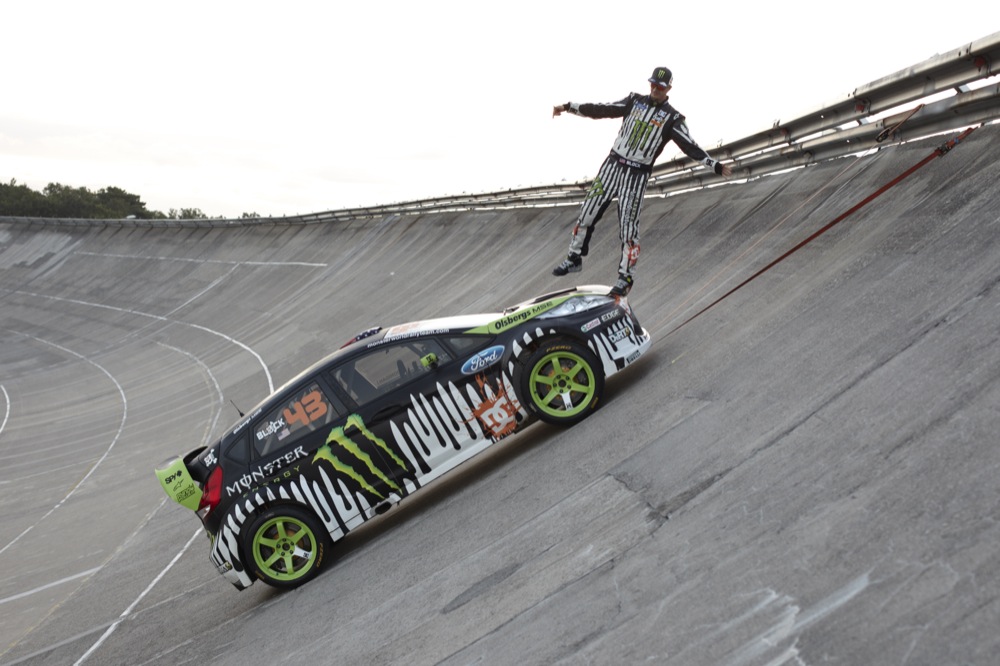 To say that DC Shoes cheiftan and rally driver Ken Block has become an Internet celebrity of late is like saying a female praying mantis has a penchant for ruining its mate’s day once they’re done getting it on; both are a bit of an understatement. With his first and second Gymkhana videos (as well as their related remixes and permutations, plus his appearance on Top Gear in which he chauffered a bemused James May around an airport), Block has brought high-concept hoonage into the (semi-)mainstream consciousness, inspiring at least one spoof and numerous video-game-based homages.

So what does he do to make sure the third film of the main canon tops the first two? Well, at first we were quite worried Kenny B had inhaled a little too much tire smoke, for “Gymkhana Three, Part 1” was, minus some vehicular hijinks, little more than a music video for The Cool Kids. But then we remembered a “Part 2” was likely on its way, and yesterday afternoon it finally hit the ‘Net. Was it worth the wait? Take a gander after the jump; we’re betting you’ll agree with us when we say, “Hell to the yes.”

Since Block is a Ford man now, the savage Subarus of the previous two vids have given way to a modified rallycross car based on Dearborn’s new-to-America Fiesta subcompact. Chief among the upgrades are all-wheel-drive and a turbocharged 2.0L engine laying down about 650hp. Needless to say, it’s scorching fast and features an angry soundtrack to match. The venue marks the first time the Gymkhana franchise has gone international; specifically, it’s L’Autodrome Linas-Montlhéry on the southern outskirts of Paris. Opened in 1924, this French circuit’s signature feature is the 1.58-mile oval with a ridonkulous 51-degrees of banking in the turns. (Don’t lie; you know you’d watch a NASCAR race on it.) In fact, it was seeing a picture of this mountainous banking online that inspired Block and his team to make it the location for “Gymkhana Three, Part 2.”

As you’d imagine, drifting and doing donuts on such a steep surface presents some unique challenges, but if the video is anything to go by, Ken had little trouble figuring it out. Of course, he also had some other obstacles, including old favorites like donuts in confined spaces and orbiting a Segway rider. We just hope no group combatting violence against tires (In this day and age, we would be shocked if one didn’t exist.) sees this.