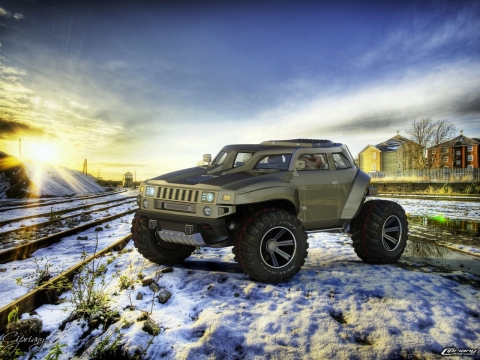 Like many brands currently in automotive limbo, the future of Hummer is unclear. China’s Sichuan Tengzhong Heavy Industrial Machinery Co. Ltd apparently has some big plans but nobody knows what those may be. Right now there is no pipeline and product development is non-existent.

What we do know is that Hummer’s new owner wants to focus on environmentally-friendly vehicles with a smaller footprint than today’s behemoths. As such, a Romanian designer named Andrus Ciprian has created some renderings of what a potential Tengzhong-produced SUV might look like. His Hummer HB Concept is a unique and engaging proposal for the future of the brand’s lineup.

Besides the progressive look and the fact that there are basically no overhangs in the front or back, the massive 4 x 4 tires immediately let you know that this thing means business. Interestingly enough, Ciprian forgoes a lighter uni-body construction in favor of a body-on-frame using a combination of aluminum and carbon fiber. The powertrain would be a bio-fuel capable V6 engine driving all four wheels with a six-speed slushbox.

Running beneath the HB Concept is armored paneling, not for roadside bombs but to protect the occupants and the driveshaft from rocks or other things that could pierce the underbody. It is also outfitted with a winch mounted inside the front bumper making it capable of extraction from tight spots or lending a helping tow.

Designer Ciprian envisions two different flavors of the Hummer HB. The first would have a small windshield divided into three separate panels with a cadre of cameras mounted outside the SUV to feed video to the driver. The second option would have a more typical single-frame windshield and some serious lighting apparatus mounted on the roof with the extreme off-roader in mind.