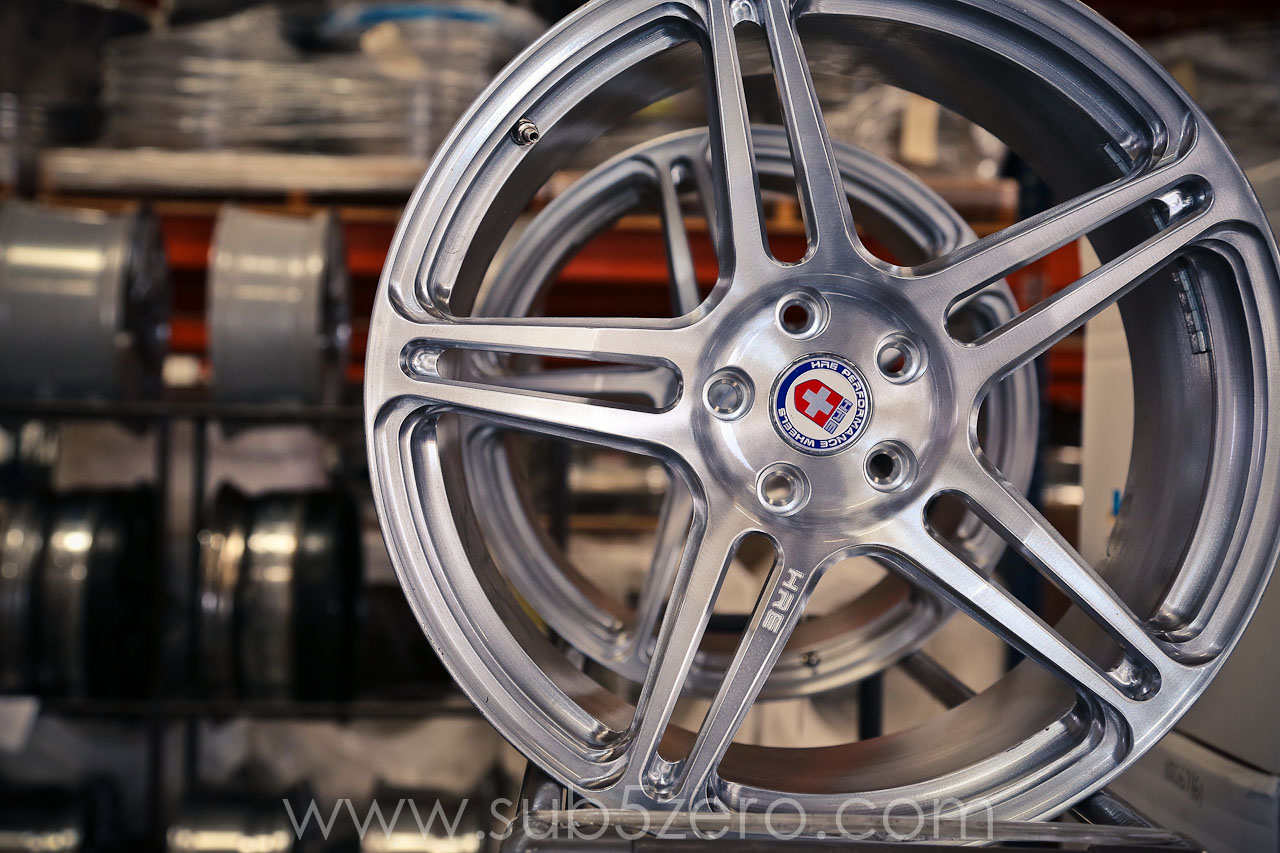 One of the easiest and most popular ways to transform the look of a vehicle is to fit it with a set of aftermarket wheels. However, with so many wheel manufacturers and models from which to choose these days, the process of selecting new rollers for your ride is anything but easy. You could probably spend a year deciding on what you want, only to have to start the process over again as new companies and styles arrive on the scene.

Then again, why not stick with a well-established and respected name in the wheel biz? Maybe one that’s been around since 1978, is based in the United States, and manufacturers all of its wheels in the United States? Not too many manufacturers fit that description, but we can think of at least one that does: HRE Performance Wheels, whom we happened to visit during its open house last weekend. 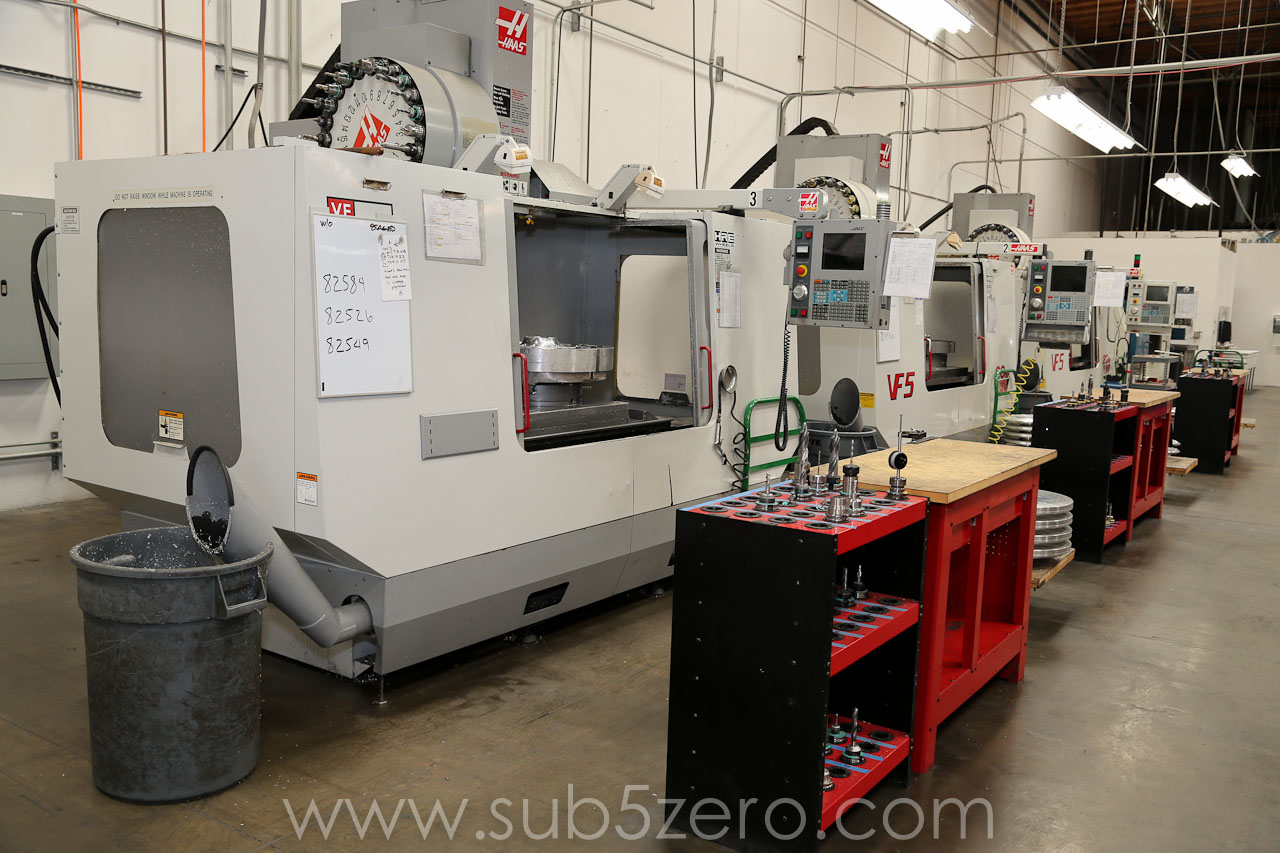 Occupying one massive 60,000 square foot unit of an even more massive industrial complex in Vista, California (roughly smack dab in between Carlsbad and Escondido), HRE’s facility is impressive just in terms of sheer scale. But the operation becomes even more impressive when you get a look at the wheel manufacturing process, which is exactly what we (and a gaggle of other open house attendees) received courtesy of company president Alan Peltier, whom you might recognize from the current Mothers polishes and waxes TV spot.

Our tour began with a look at how the one-piece wheels look in the various stages of the production process, from the raw cylinder of 6061 aluminum (which weighs over 100 lbs.) to the finished product. Peltier then explained how the billets are forged – that is, reshaped by being heated and struck with tremendous force by dies – by HRE’s supplier in Orange County into broad, flat wheel blanks, which are then shipped south to HRE. Incidentally, HRE’s supplier also provides forgings for the likes of Ferrari, Lamborghini, Pagani and even Boeing. 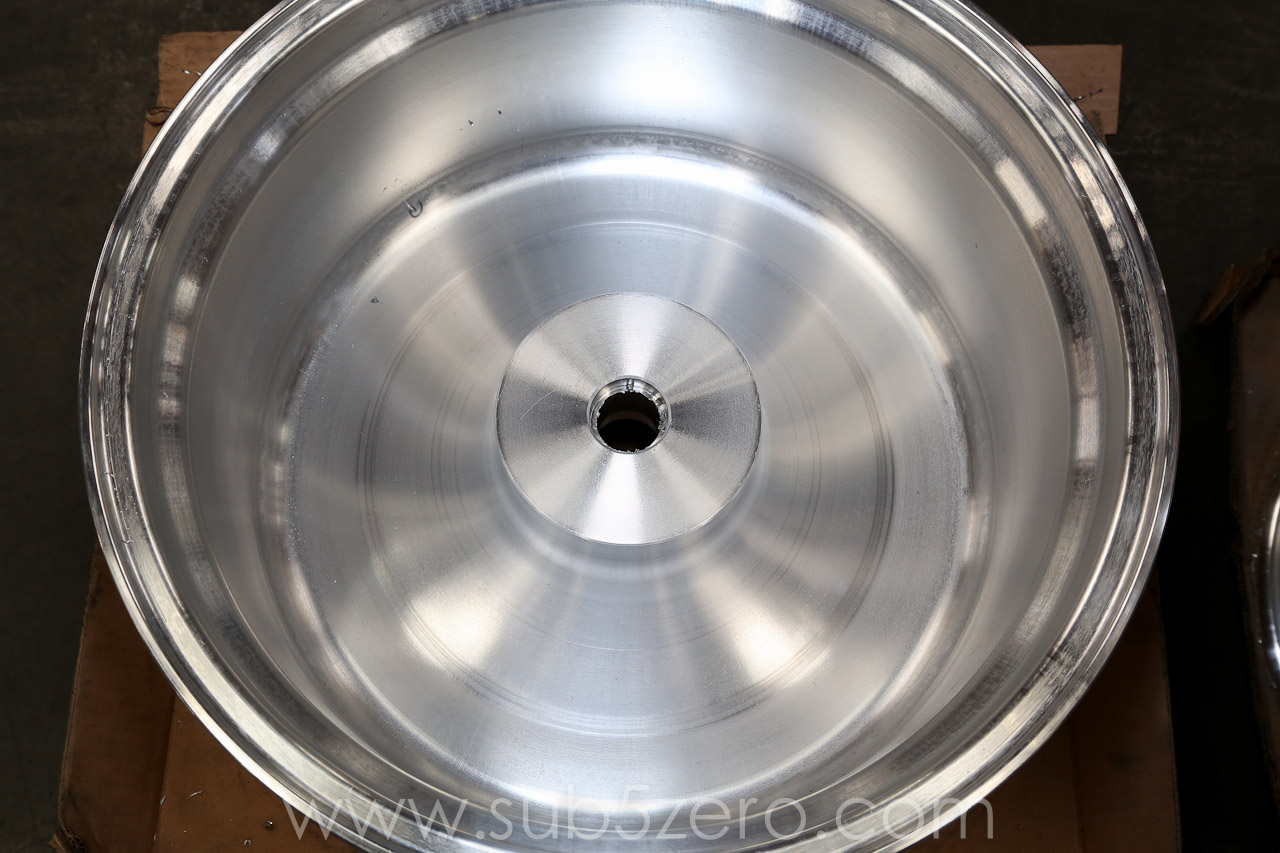 The first stop for the blanks at HRE is the flow forming (aka metal spinning or spin forming) machine. It grabs hold of the proto-wheel and begins spinning it. Shaped dies are then moved in to apply pressure to the wheel, and the dies are moved up and down and in and out to stretch the aluminum into the desired rim width and cross section. And because this is all being done by the wheel is spinning, it remains perfectly round.

Next, it’s into the lathe. The part is sent spinning once again as precision CNC (computer numerical control) guided tools carve away material until only as much aluminum as is needed to form the particular style, diameter and offset (not to mention provide maximum strength and durability) remains. 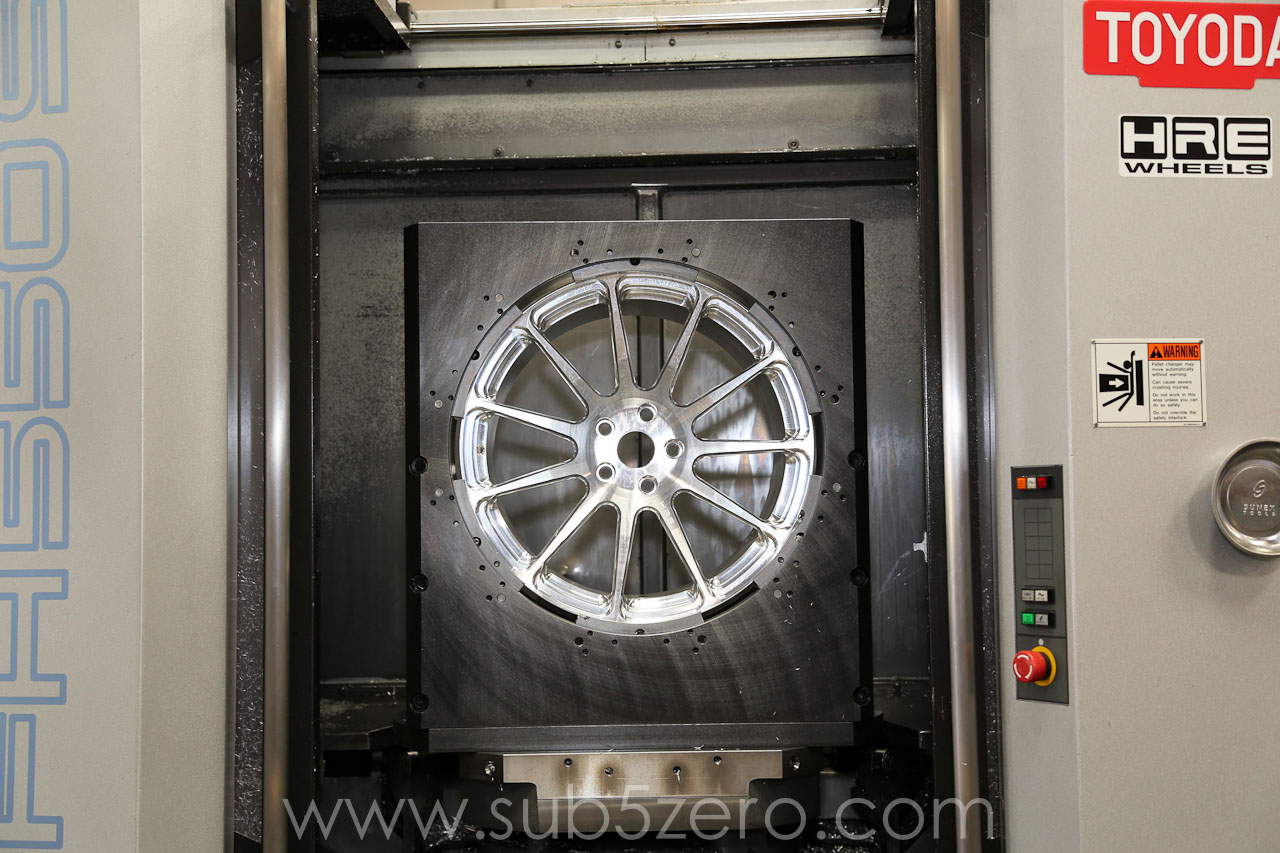 By this stage you can tell it’s an automotive wheel, but it lacks the openings that form the spoke design, lug holes, valve stem hole and, in the case of the new off-roading-focused bead-lock line designed in cooperation with Rhys Millen, the bead-lock ring fastener holes. Putting all those holes in the wheel’s face is the job of the five-axis milling machine. The wheel is clamped onto a moving platform as a tool (which also moves) cuts and drills the required openings specific to each wheel design and application.

So the first three in-house processes are performed by machines with sophisticated robot brains, but the rest of the processes will be performed by humans with squishy pink brains. First up is the polishing room, where between 8 and 10 hours (yes, hours) are devoted to ensuring each wheel is free of scratches, blemishes and other irregularities, and has a mirror-like shine. 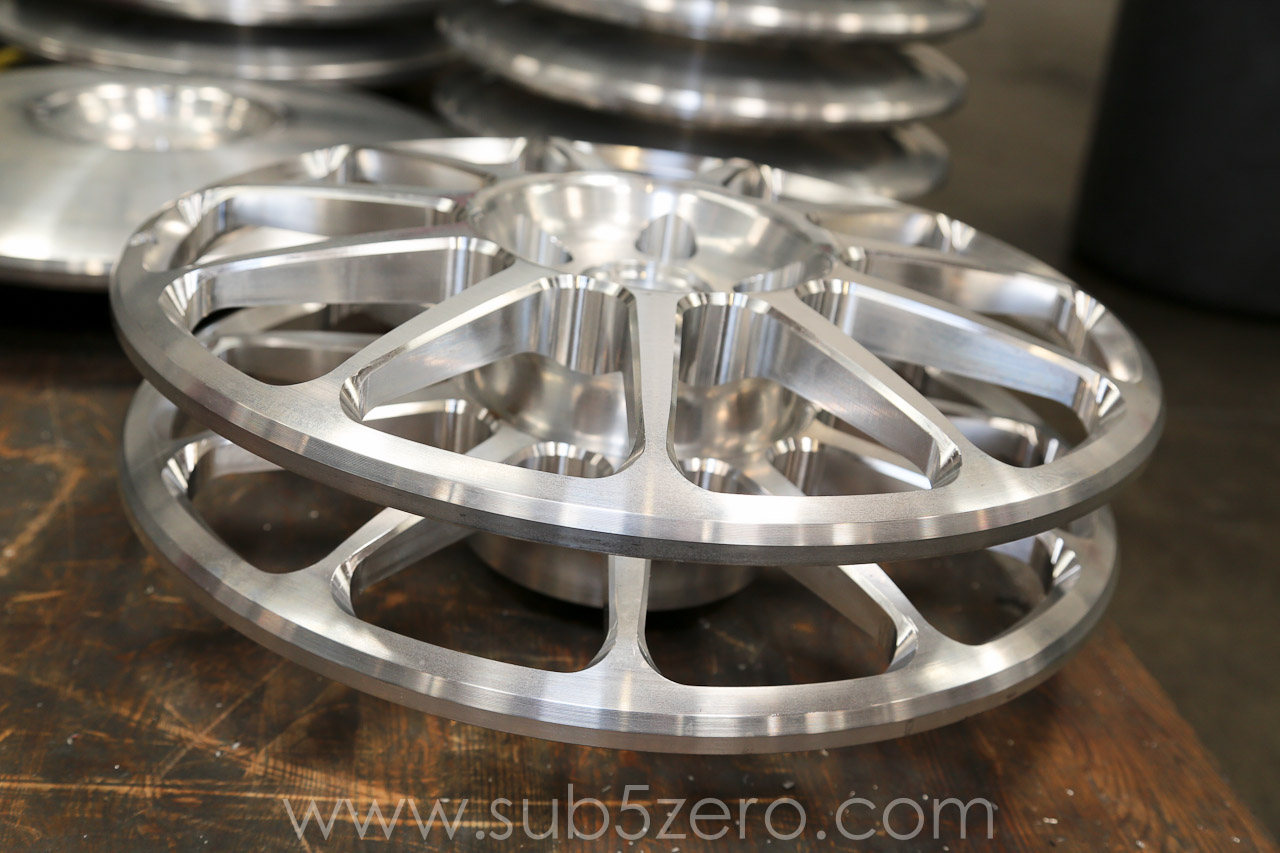 But because bare aluminum doesn’t stay pristine very long in the real world, HRE coats its wheels with a variety of finishes, ranging from a simple clear coat to a custom color the buyer might request. Once the powder coating is sprayed on, the wheel is baked at a temperature below about 350° F; anything higher can compromise the integrity of the metal, and HRE doesn’t trust outside shops or the do-it-yourselfer to adhere to this guideline on every single wheel.

Once out of the oven, the wheels are given a final inspection and boxed for shipping. Speaking of shipping, a whopping 40% of HRE’s wheels are sold to overseas customers. This isn’t really surprising, considering HRE’s factory meets the safety, quality and durability standards set forth by TÜV (basically the German-based global equivalent of Underwriters Laboratories), a certification that companies selling aftermarket wheels in Germany, Austria and other European countries are required to have. Peltier alleges many other wheel manufacturers claim to have TÜV certification, but if you ask to see their certification numbers, they’ll usually find ways to refrain from doing so, probably because they don’t actually have TÜV numbers. And those HRE Wheels sold domestically are tested to stringent US standards as well. 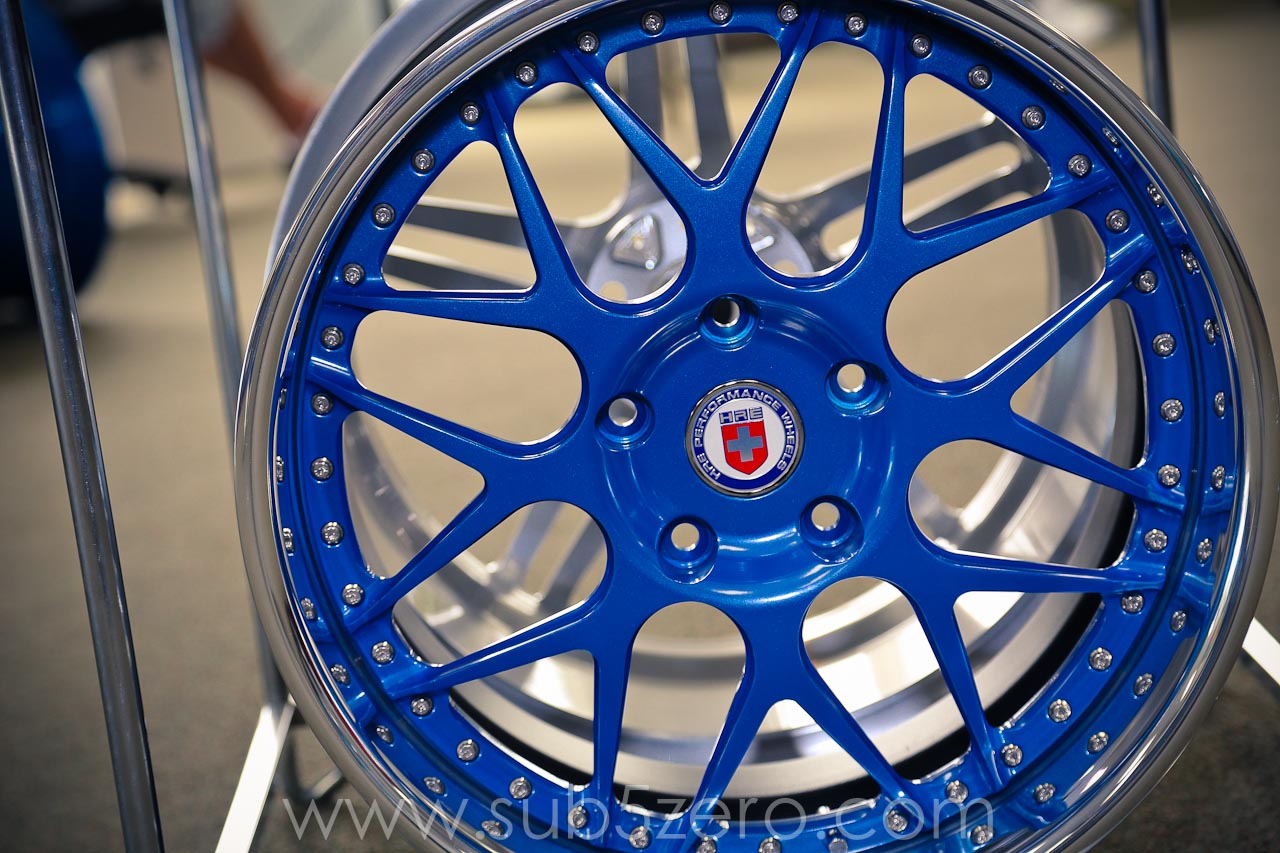 The company’s three-piece wheels take a few additional steps. The centers are forged, machined and milled much like the one-piece wheels, but the difference is the centers are then attached to the rim with metal fasteners, usually about 30. The standard fasteners are stainless steel, while lighter weight titanium fasteners (which are currently being imported from Germany and cost $4 a pop) are optional. The assembled wheels are then polished and powder coated in the same fashion as their one-piece siblings.

Regardless of the number of separate pieces that comprise each wheel, though, one key attribute remains the same: HRE won’t build a wheel until you order it. That means there aren’t stacks and stacks of wheels taking up space for months (or years) at a time, and that HRE can tailor each wheel to suit each customer’s particular vehicle and taste. Plus, if you have the financial wherewithal, HRE will even set you up with one of its designers to work with you to create a truly one-of-a-kind set of wheels for your ride. And HRE’s commitment doesn’t end when the ship your wheels to you; the company’s street wheels are covered by a two year warranty on the powder coating, and a lifetime structural warranty. We saw a few banged up HREs that were awaiting repair or replacement on the tour. 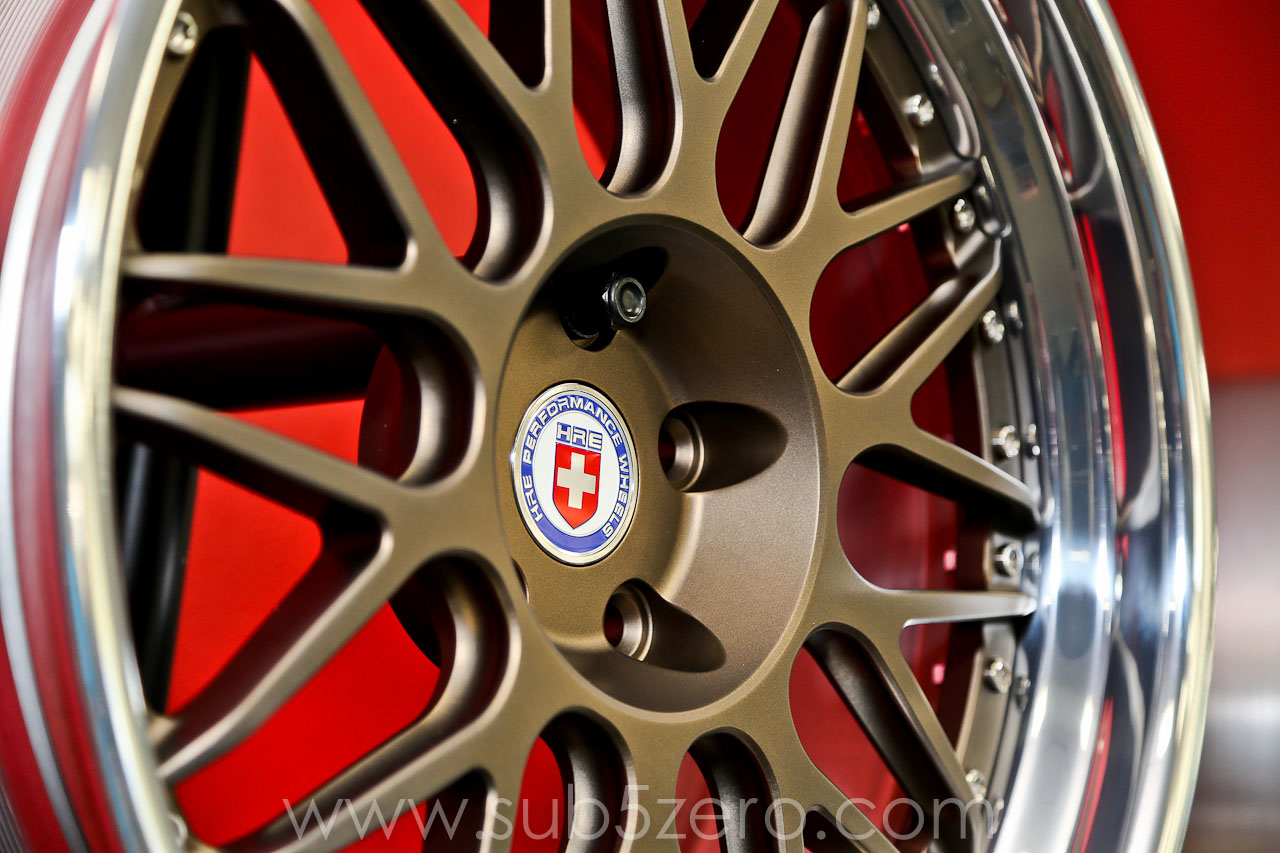 The bottom line, folks, is being able to see HRE Performance Wheels’ manufacturing facility and processes up close gave us an added appreciation for just how much effort and devotion goes into crafting every last one of its wheels. Yes, there are plenty of companies churning out cheaper, flashier wheels, but they tend to do so by the thousands, often at a factory on the other side of the world. And quality control for those wheels? Pfft, if it’s shiny and not-terribly-oblong, it passes. We can’t speak for you, but we’d prefer to pay more money for wheels that we know are obsessively designed, painstakingly sculpted from the finest materials, proven to be safe and long lasting by one of the most demanding third party auditors on the planet, unflinchingly supported by their manufacturer, not available in every speed shop from here to Timbuktu, look fantastic and, oh yeah, made in the United States of America. Does that make us crazy?