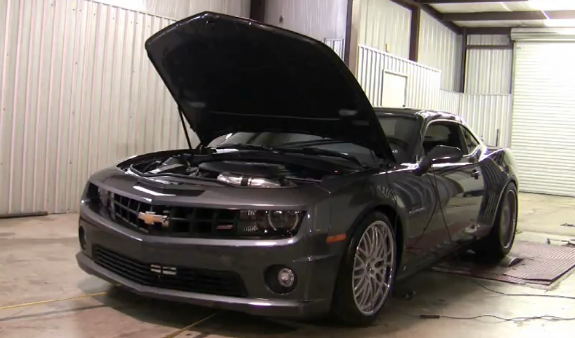 The 2010 Chevy Camaro is white-hot right now, handily outselling the Ford Mustang and becoming one of the most popular and competitive tuning platforms out there. I can only imagine what kind of amazing transformations will be showcased at the SEMA Show this year. But for now, there’s an arms race to equip Chevrolet’s reinvigorated pony car with the biggest and baddest engines and performance rigs possible.

Lingenfelter is offering five levels of power with outputs rated at 550,570,650,750 and 800 horsepower. Fesler-Moss is serving up three levels of performance using the following engines: LS3 (430 hp), LS7 (505 hp) and LS9 (620) hp). And Geiger Cars is producing a Camaro SS Compressor featuring a high performance supercharger kit that boosts engine output to 568 hp and 799 ft-lbs of torque. This is only scratching the surface…

Hennessey Performance Engineering is one of the favorites in the new horsepower wars. Their weapon of choice is the LS9 engine pulled straight from the Chevy Corvette ZR1. The company was nice enough to release this footage and the results of their maiden dyno run with the new HPE700. This 2010 Camaro SS is supercharged with 14.5 psi of boost to produce a whopping 645 rear-wheel horsepower with 653 lb-ft of torque. This feat is accomplished using 93 octane petrol. It now has the distinction of being the world’s most powerful Camaro SS. Time will tell how long that title holds. But in the meantime, check out this video of Hennessey’s monster roaring on the dyno!