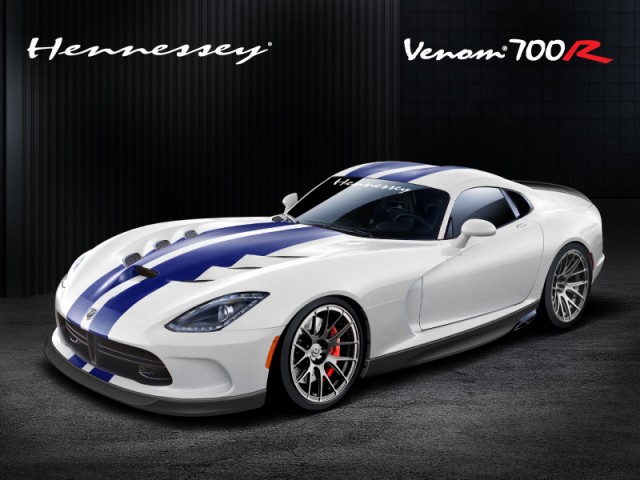 John Hennessey’s first automotive tuning project was his own 1991 Mitsubishi 3000GT VR4, but the Texas hot rodder made his name (and built his company into what it is today) on the backs of hopped up Dodge Vipers. From the first Venom 500 in 1993 to the 1,000hp-plus twin-turbo monsters of the last few years, Hennessey has made itself synonymous with the term “tuned Viper,” even as the company has introduced upgrade packages for numerous other vehicles, as well as its own supercar, the Venom GT.

So now that there’s a new Viper (sold under the SRT banner), it should be no surprise that HPE plans to make it even burlier as well. But rather than just offer one flavor of extra spice for the first SRT-badged vehicle, Hennessey is offering two. 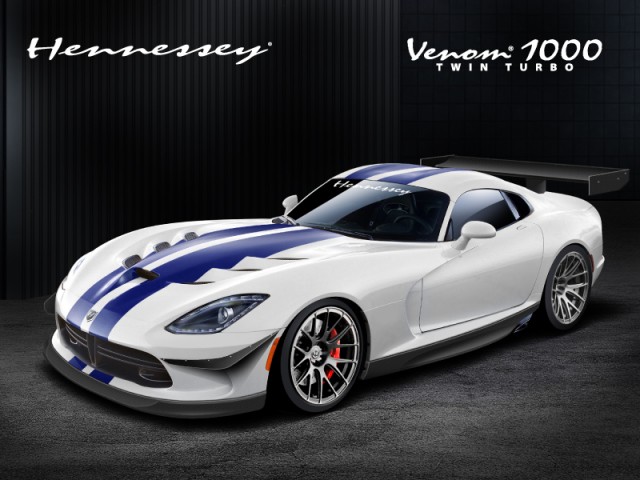 First up is the Venom 700R. Thanks to improved breathing via new air filters, cylinder heads, exhaust headers, high-flow catalytic converters, a stainless steel exhaust system, and a remapped ECU, the 8.4L V10’s power output climbs from 640hp to 725hp, while the torque figure rises from 600 lb.-ft to 695 lb.-ft. As a result of this added muscle, the claimed 0-60 mph time for the Venom 700R is 3.1 seconds, the quarter mile goes by in 10.7 seconds at 134 mph, and top speed checks in at 218 mph. Not too shabby, if you ask us.

Of course, there will always be some yahoos who think those figures are still shabby. For these hard-to-please wiseguys, HPE will also offer the Venom 1000 Twin Turbo package. With forged engine internals, two ball bearing turbochargers, a front-mounted air-to-air intercooler, all the necessary plumbing and fuel delivery system upgrades, and a remapped ECU, the Venom 1000 kicks out a projected 1,120hp and 1,092 lb.-ft which, for reference, is within spitting distance of the output of the Bugatti Veyron’s 8.0L quad-turbo W16. Yeah, that’s crazy.

And the Venom 1000’s performance figures have craziness to match that of the power output. Get the launch right (Hennessey recommends drag radials at minimum for the best takeoffs.) and nail every shift with the 6-speed manual transmission, and HPE says you’ll hit 60 mph in 2.7 seconds and cover the quarter mile in 9.7 seconds with a trap speed of 152 mph. In other words, you’ll probably have to put in some sort of roll bar if you don’t want to get banned from every sanctioned dragstrip you go to after one pass.

Other upgrades that come standard with both packages include Hennessey-branded premium floormats, exterior badges, numbered dashboard and engine plaques, up to 100 miles worth of dyno tuning and road testing to get the calibration just right, and a limited warranty (Three years or 36,000 miles for the Venom 700R and one year or 12,000 miles for the Venom 1000 Twin Turbo.). Options for both packages include a bevy of body accessories including a front splitter, front dive planes and a rear wing, lightweight monoblock wheels, a differential cooler, a roll bar, five-point racing harnesses, adjustable coilovers, custom painted (not vinyl) exterior stripes, carbon fiber interior trim and…a fire extinguisher, which is probably a good idea, particularly for Venom 1000 buyers.

No word on what all this stuff will cost, but you can bet the numbers will be large. But when the performance gains are so humungous, does that really matter?