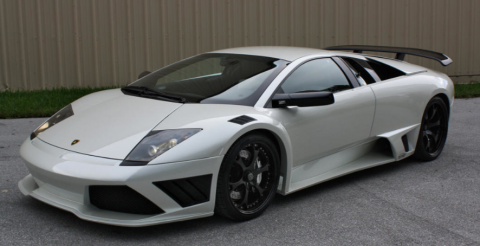 In the supercar world, everyone wants the newest thing. The world of supercars is like the schoolyard at recess; the newest toy is the fad of the week. “Oh loooook, little Timmy Kesler has a cute little Ferrari F430! Too bad he didn’t wait for the Scuderia model like I did! Does your F430 have space in the trunk for a My Little Pony? See this Timmy? That’s where the laser guns mount on the Scuderia. It’s ok though, maybe you can pick up a used one in a few weeks.” Supercar models stay for a little while, at best, and then they are sent out to pasture to make way for the latest technology-laden street beast. Whatever comes next will always have more power, more leather, more carbon fiber…more cowbell.

But sometimes the newest kid on the block isn’t the fastest. Sometimes there’s a car that had been over-shadowed by a new younger brother named LP560-4. And this new younger brother is really fast, and friendly, and everyone seems to like him soooo much. But Murcielago, by name, is not a car to go out easy. It was named for a fighting bull that lived through 24 sword strikes. It was so strong and fought with so much soul and determination that the bullfight was stopped and the bull was allowed to live. It seems there is quite a bit in a name, because the older brother isn’t going out without a fight. And he’s been in the basement hitting the weights. Hard.

The car of course is the Lamborghini Murcielago. Lamborghini recently released its LP670 SV this year, which indicates they are retiring the Murcielago it is based on. And while the next offering by Lamborghini will no doubt be a little faster, lighter, and hopefully prettier, than the outgoing car, Jason Heffner at HEFFNER PERFORMANCE thinks there’s still some life in the old bull. In fact, after he puts your Murcielago through a “training session”, few cars will even step into the ring without soiling their own belly pans.

Introducing the HEFFNER PERFORMANCE Lamborghini Murcielago Twin-Turbo package. The race is over, the work is done (almost), and the results are insane. Let’s skip to the number you all want, 1100. Yes that’s the horsepower output that resulted from months of R&D. Oh geez I almost forgot— that’s 1100hp to the wheels. That’s right, this engine is able to achieve power normally reserved for Supras with a turbo the size of a patio table, or maybe a 454 with a supercharger and blue bottle in the trunk. At 1 bar (14.5 psi.) of boost, on a 100-degree day, the car put down 1114 WHP. Here are the words from HEFFNER on the performance:

For comparison; a Bugatti Veyron makes that jump in 5.6 seconds, a Saleen S7 TT takes 6.1, and Ferrari’s beloved Enzo takes a yawn-worthy 7.3. The capability of this car is absolutely incredible. Judging from the in-car video it runs from 5-155mph in 11 seconds. I’m sure that time would drop slightly with an E-Gear equipped car– not to mention that this is with 200 less horsepower than the car’s max. Lamborghinis have always been about speed, sound, emotion, wild designs, and a wild (good or bad) ride. This is like Lamborghini squared. This package not only gives you one of the fastest cars on the planet, but your Murcielago Twin Turbo is not in any danger of being passed up by the supercar of the week.

Results and performance figures aside, the finished product is a beautiful work of craftsmanship. HEFFNER must spend as much time thinking about how their products will look as they do how they will perform, because the resulting twin turbo piping is stunning. It looks like an OEM piece with the artistic touch Italian cars are known for. It doesn’t look like someone built that kit for the car; it looks like it was built with the car. Your eye can’t help but appreciate how the curved and polished turbo piping sweeps back into the engine bay. I found myself looking at the engine bay pictures over and over. Engine bays rarely look this good while providing that much power. The combination of the two has stuck this Murcielago TT to my own personal “cool wall” with superglue.

We will have more details on the Murcielago TT kit as we receive them, but keep your eyes here because HEFFNER is also putting the finishing touches on it’s twin-turbo kit for the LP560-4. As if everyone didn’t like that car enough.