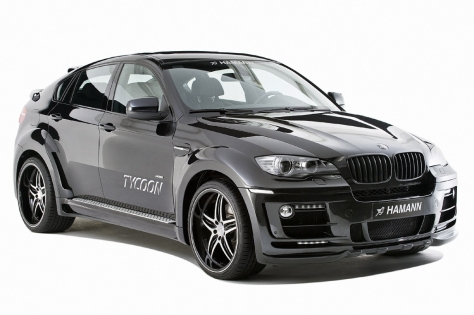 The styling has been updated with a new front wing and back wing extension, side skirts, front apron (with huge air inlets and LED running lights) along with a rear diffuser. Overall the body has been widened by a woping 60 millimeters. The Tycoon rides on 23-inch ultralight forged wheels with polished lips and black insets. They are wrapped in serious low profile 315/25/R23 tires. The chassis has been dropped 40 millimeters and has new coiled springs.

The engine is the same inline-6 twin-turbo in the xDrive30d, just boosted to 360 horsepower. Muffler options include 2 or 4 pipe exhaust systems. The Hamann BMW X6 Tycoon derives it’s name from Japanese culture and is a “synonym for an extraordinary shape.” We tend to agree and think that this new crossover mod is not too shabby to say the least.