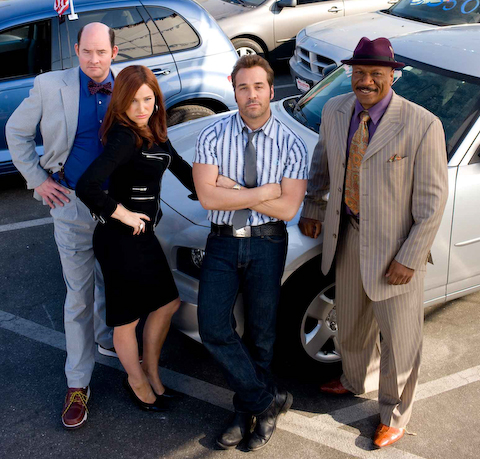 The used car salesman has gotten a bad rap for years. They often manipulate, kajole, twist and turn you to make you feel like you would be the dumbest person ever if you didn’t make a car purchase post haste. There are also plenty of very nice and honest ones. However, in The Goods: Live Hard, Sell Hard, Don Ready, the lead character, takes the low low road epitimizing the slimeball used car salesman in only the way Jeremy Pivens can pull off. It’s like his character of Ari Gold, the agent, has been transplanted into Don Ready, the used car salesman, with all the same quick wit, fast retorts and attitude.

The Don Ready Story follows Jeremy Piven and his band of conspirators including Ving Rhames and David Koechner as the automotive equivalent of an emergency response unit, rushing to any struggling used car lot and getting it off life support. They are called to task for one particular dealership in Temecula and drop in like army commandos, except Piven smokes, drinks and swears at every opportunity. Things are going well until he meets his match, a woman who isn’t charmed or tricked by his mojo. Check out the video after the jump.

The Goods: Live Hard, Sell Hard is the first Gary Sanchez Productions endeavour, which is made up of the superteam Will Ferrell and Adam McKay. The movie is directed by Neal Brennan, the creator of the huge hit Chappelle’s Show. It will probably be pretty hysterical. The movie is scheduled for release on August 14th. Click this link for the unrestricted red band version of the trailer.