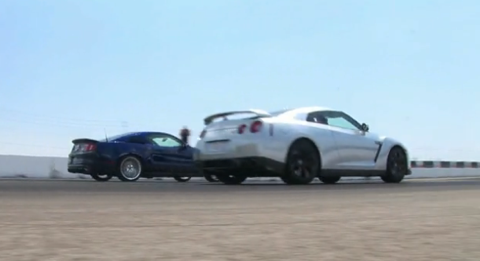 We all know that the Nissan GT-R R35 is an absolute beast with 412hp and 393 lb-ft of torque at the wheels. We also know that the Ford Shelby Mustang GT500 is also no chump with a whopping 635hp and 581 lb-ft of torque. But what we didn’t know was how Godzilla and the Super Snake would fare in a head’s up quarter mile sprint. Stats aren’t everything and real world performance is often surprising. This video has an entertaining intro with a Dharma Corp style quality, followed by the moment of truth. We won’t spoil it… Just check it out after the jump!