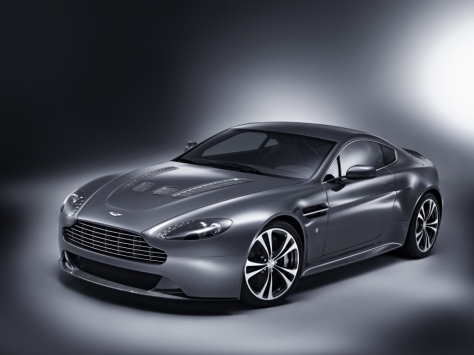 Building on the design that first took form back in 2007, the Aston Martin V12 Vantage has been brought to market in under 12 months from concept to conception. It is truly glorious! The svelt body of the Vantage marque already ensured agility and quick precision. And now, with the a 6.0L V12 engine with 510 hp and 420 lb-ft of torque, the more aggressive coupe has a power plant that makes it a true driver’s sport car. Top speed is pegged at 190 mph with 0-60 mph time of 4.1 seconds. The power plant is mid-mounted driving power to the rear wheels. With stiffer springs in the suspension, this car is now capable of pulling off an outstanding 1.3 of lateral G’s.

The V12 Vantage has many subtle design cues that hint at its superior performance. Aston Martin took expertise gleaned from it’s N24 car program and used that knowledge to maximize the cars downforce and minimize its drag. A new front splitter pushes cool air to the brakes and radiator while bonnet louvres pull heat out of the engine bay and produce additional down force. Side sills route air to the rear of the car instead of under it to diminish any lift in the back. In addition, there is now a more aggressive boot flip, new carbon fiber diffuser and rear under floor that all work hand in hand to force air into a high-capacity oil cooler and create a low pressure zone beneath the car to increase overall grip.

The interior of the car demonstrates how far carbon fiber and Alcantara have come in terms of becoming a de facto standard. Their strength and reduced weight have led to their widespread application and Aston Martin does not shy away from this trend. Look for evidence of their use throughout the cockpit. If so desired, the company even offers optional carbon fiber and kevlar seats.

The Aston Martin V12 Vantage will be limited to a total production of 1000 vehicles throughout its lifespan ensuring its exclusivity. Pricing has not been released but we will provide an update during the Geneva Motor Show when this information becomes available.