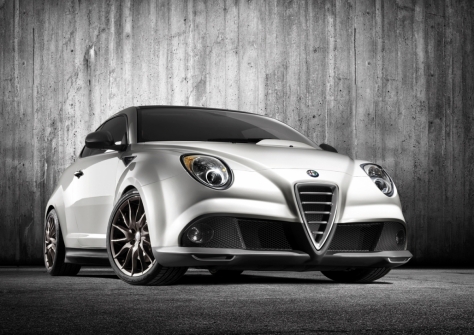 Alfa Romeo is back. Back in a big way. They had a bit of a lull in their performance and aesthetic prowess for a while but have recently really found their stride. Their standard Alfa MiTo is a cool alternative to the MINI or Audi A3. But the Alfa Romeo MiTo GTA has the power-to-weight ratio and performance specs to eat a JCW MINI or Audi S3 for lunch. GTA stands for Gran Turismi Alleggerito. Unfortunately, this car is still in the concept phase but it looks like a production run is in the works. It will be officially unveiled at the 2009 Geneva Motor Show next week.

The Alfa Romeo MiTo GTA gets a 90 horsepower boost over the base model, up to 240 hp. This is a nice feat, considering that the engine in only 1.75L, and is accomplished via a turbocharger, direct injection and variable-valve timing. The car also benefits from some nice weight reductions in the form of carbon fiber on the tailgate spoiler, mirrors and roof. In addition, aluminum is swapped in for many chassis and suspension components as well as the braking system. The Mito GTA gets better handling performance as well. The car is dropped 20 millimeters, has access to variable steering geometry and rides on an active suspension system. The GTA is also outfitted with 19 inch wheels with Brembo brakes. Look for more details during the show.