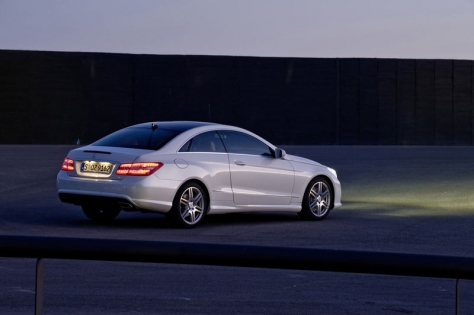 Mercedes-Benz has really outdone itself this time. The new 2010 Mercedes E-Class Coupe is now edgier with cleaner lines and more aggressive styling, yet provides amazing fuel economy. The company has released images and specs ahead of it’s first official production preview at the 2009 Geneva Motor Show. The company has made great strides with its turbo-diesel engines and direct injection technology which has resulted in the E 250 CGI BlueEFFICIENCY Coupe and E 350 CGI BlueEFFICIENCY Coupe both having great power on demand and amazing fuel efficiency.

That said, we know our audience is most interested in the AMG tuned top-end model E 500 Coupe so we will get to it… The new Mercedes-Benz E 500 Coupe comes with a revised V8 engine capable of 388 hp and 390 lb-ft of torque. And yet it still gets 25.9 mpg (combined NEDC consumption). Check out the gallery and press release below:

STUTTGART – Mercedes-Benz is unveiling the coupe version of the new E-Class at the Geneva Motor Show. Just two months after the debut of the E-Class sedan, the brand is adding a special highlight to the new range, at the same time maintaining a tradition that has repeatedly been the source of great excitement throughout the history of the E-Class.

The new E-Class Coupe brings together emotion and performance in a very special way. With the classic coupe profile that dispenses with the B-pillar, and with fully retractable side windows, the new two-door offers a particularly sporty interpretation of the dynamic design that defines the new E-Class. Simultaneously, the most aerodynamic version of the coupe sets a new record in wind resistance. With a Cd of 0.24, the model is the world’s most aerodynamically efficient series production vehicle.

The model line up for the U.S. market includes the V6-powered E350 (268 hp, 258 lb-ft) and the V8-powered E550 (382 hp, 391 lb-ft). European customers will also have a choice of two new four-cylinder engines that consume up to 17 percent less fuel, while offering a significant increase in power and torque. The new E-Class Coupe will appear in U.S. Mercedes-Benz dealerships in June 2009.

The new coupe offers the full spectrum of technical innovations that might be expected from a sporty, luxury class coupe. These include Agility Control suspension with adaptive shock absorbers, ATTENTION ASSIST drowsiness detection, the preventative passenger protection system PRE-SAFE and, in Europe, an Active Hood which raises two inches during an impact to reduce injury to pedestrians. Adaptive high beam assist and a brake hold function are other examples of how the E-Class Coupe is setting benchmarks within this vehicle class. Other luxurious standard equipment includes leather interior with sport seats and integrated headrests, a Panorama Sunroof, COMAND system with console-mounted controller, 6-disc CD/DVD changer and fully automatic dual-zone digital climate control.

Lower fuel consumption is achieved by a series of real-life orientated initiatives. These include, for example, the needs-based control of the steering and fuel pumps, the application of tires with reduced rolling resistance and the control of the alternator in accordance with driving situation and on-board voltage, as well as the decisive impact of the outstanding aerodynamics.

The distinctive line of the new two-door emphasizes traditional styling elements that make Mercedes-Benz coupes unmistakable – for example, the side window graphic, uninterrupted by a B-pillar and with fully retractable windows, and the hallmark sports grille dominated by the large three-pointed star in the center.

At the same time, the coupe displays its close relationship with the new E-Class sedan. This is evident in the twin-headlamp look that distinguishes the front of the car. The headlights share their rhomboid form with those of the sedan, albeit with a sportier, sharper appearance that creates an even more dynamic, more aggressive impression. Another feature that the coupe shares with the sedan is the powerful rear fender, which gave the “Ponton” Coupe S 220 of 1955 its athletic appearance.

Despite the family resemblance to the sedan, the new coupe exhibits an individual, refined and, at the same time, passionate character. With the swooping arrow form that dominates the entire front end of the car, starting at the front bumper and carrying well into the hood, the more extreme interpretation of the twin-headlamp look and its more sinewy stature, the new E-Class Coupe conveys an impression that is altogether more sleek and dynamic.