Ferrari stepped into the limelight once again this year at the 2010 Geneva Motor Show where they debuted their vettura laboratorio, the Ferrari 599 HY-KERS hybrid concept sports car. Known for their screaming V-12 exotic sports cars, Ferrari is for the first time experimenting with the inevitable future of electrification. The HY-KERS is based on the 599 GTB Fiorano, which is one of the best torque producing vehicles Ferrari has to offer, now amplified with the hybrid-electric motor rated at an astonishing 107 hp and 111 lb-ft of torque.

The new hybrid system incorporates pioneering engineering principles into every detail of the vehicle. The flat lithium-ion batteries are located on the floor pan of the car resulting in a lower center of gravity. The compact electric motor of the HY-KERS is coupled with a dual-clutch 7-speed transmission. Ferrari’s goal was to offset every kilogram increase in weight by a gain of at least one hp from the electric motor. 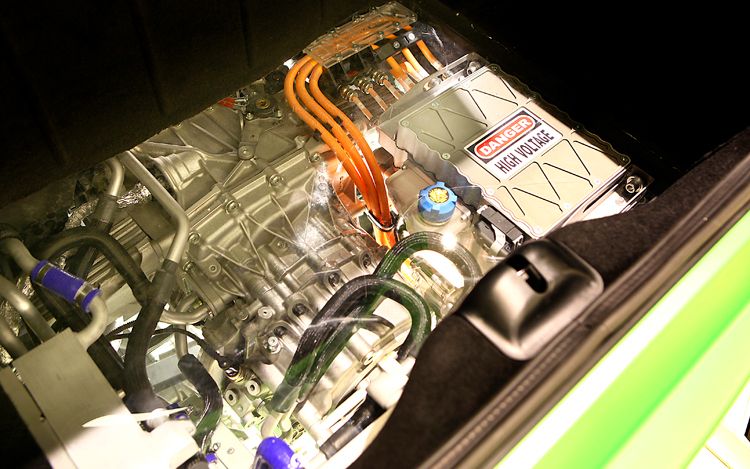 The vehicle incorporates a similarly designed system to that of Ferrari’s Kinetic Energy Recovery System (KERS) from last year’s Formula One program. Under braking, the electric motor acts as a generator, using the kinetic energy of the vehicle’s momentum as negative torque generated to recharge the battery packs. Once the batteries are charged and the pedal is to the metal, the electric motor cuts in to provide instant torque on demand. Ferrari has also applied this F1 technology to help optimize the dynamics of the car, enhance traction and improve overall braking balance of the HY-KERS.

Ferrari hasn’t gone too far out of its league. The 599 HY-KERS will still integrate with the original V-12 hyper-revving engine allowing the driver to snap the throttle open and be tossed back against the seat faster than the original model. Ferrari claims the hybrid stallion can achieve 124 mph in 7.5 seconds, 0.4 seconds faster than the current 599. The seeds have been sown in Ferrari’s debut of green technology.