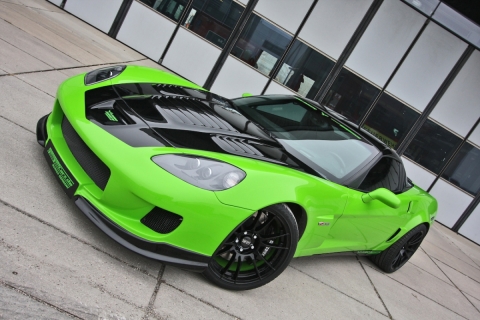 Most of the high-end tuning companies in Germany focus on turning out extreme creations based on BMW, Mercedes-Benz and Audi models. And why not — all of these are produced in their own back yard and the native engineering prowess is extensive. So when a tuner in Germany decides to focus on American brands like Hummer and Cadillac and pump out muscle cars such as the Corvette and Mustang, they tend to stand out. In fact the closest Geiger even comes to touching a European car is the Infinity brand, and that’s still not so close. The newest creation from Geiger Cars is the Wild Thing based on the Corvette Z06. This beast puts out 809 hp from it’s 7.6-liter twin-turbocharged engine.

Who ever had the possibility to drive a Corvette Z06 never complained about the engine power for sure. After all, the US- American sport-car-icon is already powered by a series seven-liter-V8 engine with 512 hp. Even expert drivers should be careful behind the wheel of this steam hammer, novice drivers should definitely not get behind the wheel of the Z06.Only a madman would want to increase the output of this fast car significant. Karl Geiger from Munich is such a madman.

To be able to increase the output of an internal-combustion engine substantially there are basically three king ways: more cubic capacity, a charge using a turbocharger or compressor as well as classic tuning in the form of the modification of locomotive engine parts as well as the supplying of fuel and air. GeigerCars.de has a long time experience in all of these divisions this is why Karl Geiger decided to go all three ways for the ultimate engine on base of the Corvette Z06. The thought of the final outcome is going to make the mouth water of hp-freaks. But one step at a time.

The Geiger Bi-Turbo power package covers a flaring of the cubic capacity up to impressive 7.6 litre. Modifications are made to the engine block, to the cylinder heads and the crank motions. Geiger employed amplified insert springs, spring cups made of titanium, sport camshafts as well as a 100 mm air mass flow meter. The dampers and the induction tract have been dealt with. The cores of the engine tuning are the two high performance turbocharger, which blow air in the combustor. And because everything that comes in in the front has to get out in the back, GeigerCars.de installed a sport exhaust system with four end pipes, each one as thick as an arm, and sport catalysts.

The paper mould of the cubic capacity giant is already more then impressive: unbelievable 890 hp at 6.100 U/min as well as 940 Nm at 4.500 tours shows the data sheet. The maximum speed is about 354 km/h. However, only the driving experience makes one comprehend what the numbers on the paper really mean. I do know what I am talking about. With an angry thunder and fizzle the Bi-Turbo-Corvette answers every gas blow with an unbelievable thrust, which seems to have the possibility to cause a whiplash injury. Pure poison! Karl Geiger has chosen his distinctive Geiger Green colour for this wild animal not without cause.

Of course there is not used a serial Z06 drive chain. Built in is a boosted transmission as well as a two-disc-transmission mad of carbon in combination with a cardan shaft made of carbon.
Shaft drives and differential gear were boosted as well.

A further challenge is the diversity of the engine power on the street. Geiger hoisted in the front 285/30 an in the back 345/25 tires on bright black coated rims. Behind the rim star appears a high performance brake system with grooved 380×32 mm brake discs and 6-piston-back gauges in the front and 355×32 mm discs and 4-piston back gauges in the back. The Geiger sport undercarriage contains sport shock absorber with 16-fold adjustable compression, tighter compound springs as well as stabilizers for font and back axle.

As usual Geiger used the in-house GT-Kit for the Corvette – car body. The bug and the rear show a completely new and brawny appearance. The louvred in the black hood not just look spectacular but also serve a technical purpose: they guard against thermal indispositions of the turbo engine.