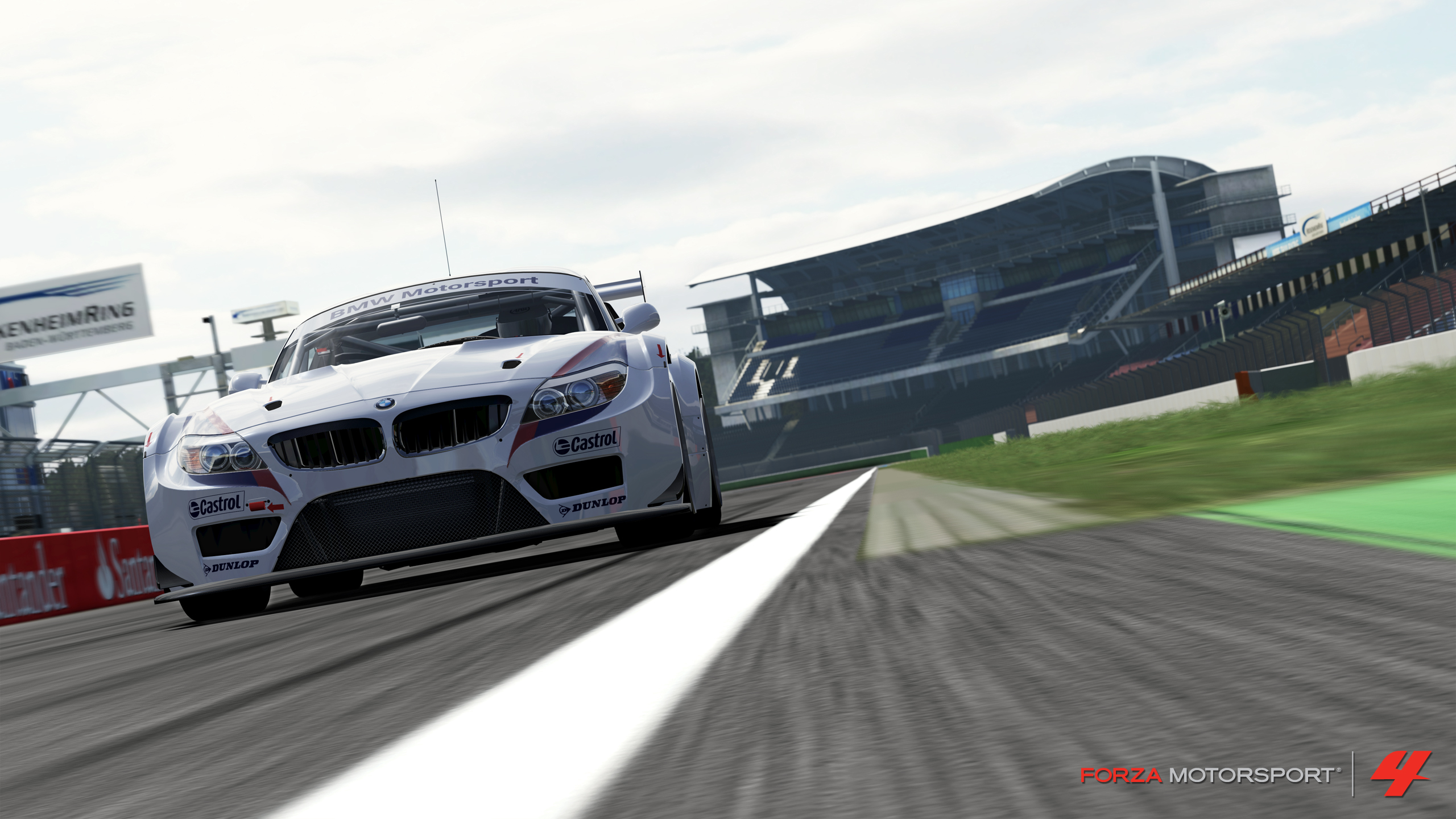 The underlying mission statement of Forza Motorsport 4 – the latest iteration of Microsoft’s flagship racing sim franchise – is spelled out almost as soon as the game loads. A surgically-clean white building interior appears as none other than Jeremy Clarkson launches into a lament on the decline of gearhead-dom. He bemoans how the car enthusiast fringe is being pushed to the margins by the masses who either couldn’t care less about cars, or want to see cars become androgynous, self-guided, unicorn fart-powered transportation pods incapable of offending even the most hypersensitive people. Eventually, though, he says there is a place where people can let their car geek flags fly without fear of being ridiculed or shunned, and that “place” is Forza Motorsport 4.

Of course, there are lots of other video games that make car buffs feel at home, and were made by enthusiasts, for enthusiasts. The one that’s probably likely to spring to mind first is Gran Turismo, the series that started before Forza and is its closest analogue (Both let you buy, customize and race hundreds of licensed cars, both are developed by studios controlled by their respective console-makers, and both are published by their respective console-makers.). But instead of making this article a straight-up comparison (and possibly igniting the Playstation fanboy/Xbox fanboy equivalent of the Crusades), we’ll take the high road and concentrate on telling you what Forza 4 has and let it stand on its own merits…though we might point out a few areas where one has a leg up on the other. 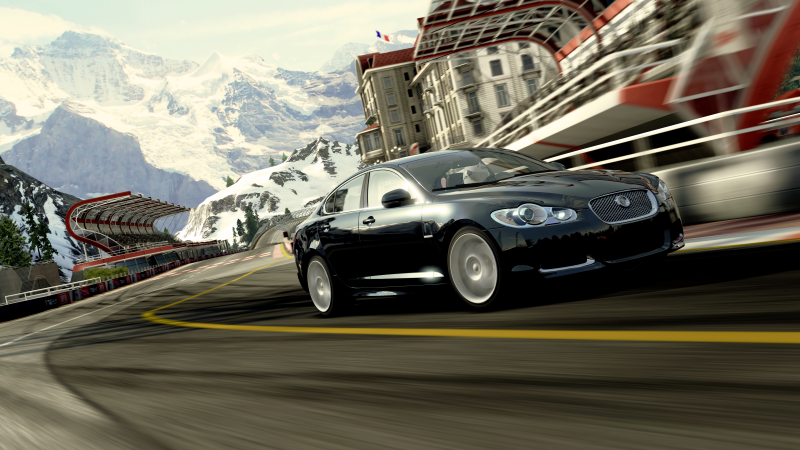 If you’ve played any of the first three Forza titles, Career mode will look quite familiar: Purchase a starter car (though if you have a Forza 3 save file, you can import its data which will give you extra cars and money depending on what level you reached in that game) and start working your way up through the racing ranks, acquiring new cars and personalizing them as you see fit. And the visual customization aspect is more robust than ever, with the ability to import the vinyl groups (though sadly no whole-car liveries) you made in Forza 3 and new body mods for select cars that let you remove rear spoilers, add hood scoops to muscle cars and, for older cars, remove the bumpers and cover the headlights for a period-correct race car look.

But looks, contrary to popular belief, aren’t everything, and the team at Turn 10 Studios hasn’t skimped here, either. Forza 4 features an all new tire model (plus dedicated drag racing tires) co-developed with Pirelli and, when combined with a new option to defeat the active steering assistance (unless you own a Fanatec steering wheel; a patch is allegedly in the works), makes for vehicles that feel much livelier and unruly at the limit. The sounds are also noticeably richer, which shouldn’t be surprising since Turn 10 hired the audio guy from the late, lamented Bizarre Creations’ Project Gotham Racing series to handle the recording and editing for Forza 4. Overall, the driving experience is noticeably more immersive. 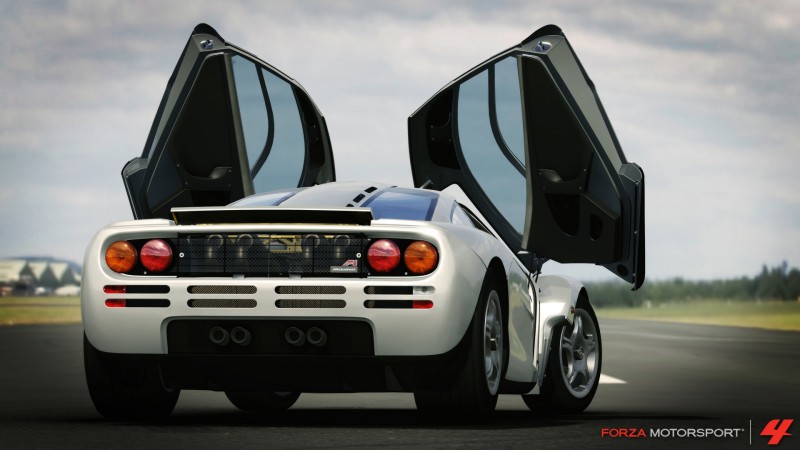 That’s good, because there’s plenty of driving to do on a host of tracks. Most of the ones from Forza 3 have returned, and a handful of new ones (including the Indianapolis Motor Speedway and Infineon Raceway) have been added. All of the tracks and environments are highly detailed (though maybe not quite as crisp looking as their counterparts in Gran Turismo 5), but it’s the cars that are the real visual stars, thanks in large part to a new rendering technique borrowed from Hollywood called image-based lighting (IBL). Rather than plopping a car model into the virtual world and wrapping it with a reflection map that gives an approximation of the light source and surrounding scenery, IBL actually takes into account the location and intensity of the light source and renders the shadows and mirror images on and around the car accordingly. The end result is eerily realistic, particularly in photo mode.

However, if you really want to have an “Is it live, or is it Memorex?” experience, check out the new Autovista mode. In it, you’ll be able to explore 25 super-high-res models inside and out using Kinect (which also lets you drive without a controller and tracks your head so you can look into a corner when using the in-car view) or your controller. You can open the doors and hood, hear presentations about certain features, and listen to the aforementioned Mr. Clarkson talk about them in his normal unfiltered, unapologetic glory. 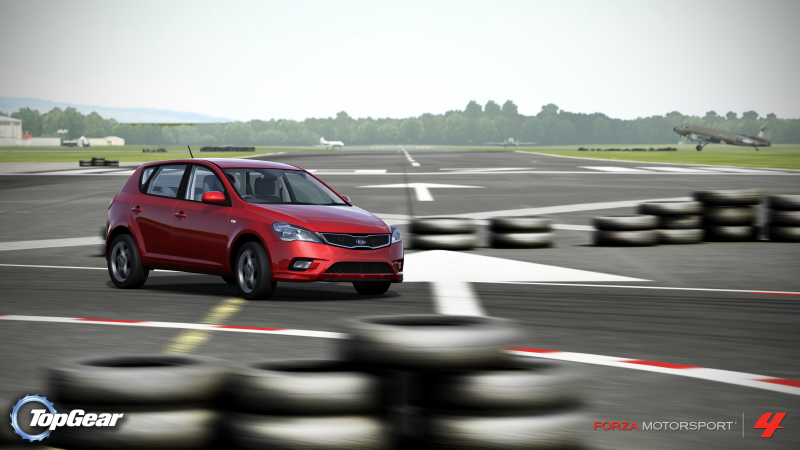 And the Top Gear connection doesn’t end with Jezza’s jaw flappings. Oh heavens no. Not only does the game include the Dunsfold test track, but it also include multiple configurations of the track, two of the three reasonably-priced cars in which the BBC show has put stars (the Suzuki Liana and the Kia Cee’d, plus the American Top Gear’s Suzuki SX4), and Xzibit-summoning games-within-the-game like car bowling (which is pretty much just what it sounds like) and car soccer (ditto). If you said Forza Motorsport 4’s utilization of the Top Gear license puts Gran Turismo 5’s utilization of the Top Gear license to shame, give yourself a gold star, because that’s exactly what it does.

Naturally, playing online adds a whole new dimension to any game, and this is especially true of Forza 4. The smorgasbord of racing and other on track activities (such as the above-listed Top Gear events, cat and mouse and others), Auction House where you can buy and sell cars, and the Storefront where you can buy and sell tuning setups, liveries and decals are carried over from Forza 3, along with two notable additions. First, there are now car clubs. In addition to fostering a sense of community among like-minded players, car clubs also feature club garages which allow members to share cars without having to gift or sell them, making it easier to create club liveries and fine tune the performance of each car. The second new feature is Rivals mode, which lets you race against the ghosts of other players. If you beat that player’s lap time, you get a monetary and XP bounty, and the faster the players you beat, the higher the bounty. Best of all, the other players don’t have to be online at the same time you are. 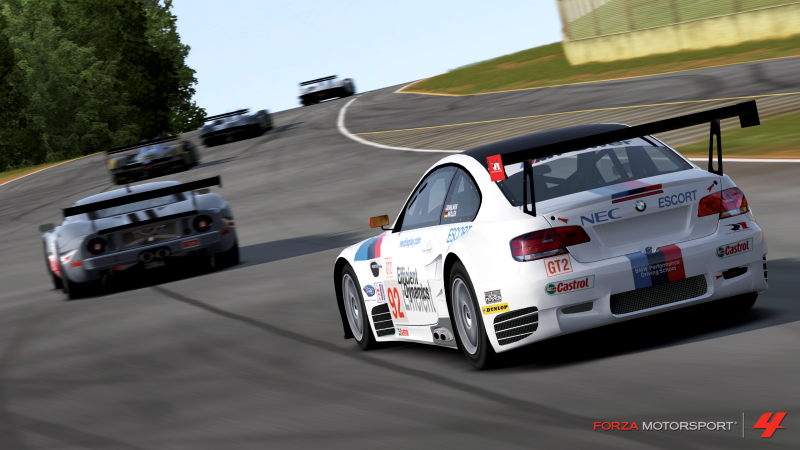 So, is Forza 4 perfect? Ah, no. While there may be over 500 cars (running the gamut from dainty European superminis to fire-barfing Le Mans prototypes), not one of them is a Porsche. Granted, this is a result of Electronic Arts taking its ball and going home rather than Turn 10 Studios choosing to drop the German sports car maker (EA currently holds the exclusive rights to Porsche in video games and PC games, but had granted Turn 10 a sub-license for the first three Forza titles.), but it’s the kind of disappointment that a trio (if you get all the limited edition, double-throwdown downloadable content) of 911-based Rufs can’t quite assuage. Also, the lack of night racing is a bummer when this game’s two closest rivals (GT5 and Need for Speed: Shift 2 Unleashed) have it. Same is true of weather effects (which GT5 also has). And we would like to see a few more customization options, such as widebody kits, the ability to change tire diameter independently of wheel diameter, and the ability to fit wheels and tires that stick out beyond the fenders; as things stand now, we’re betting our planned ’60 Corvette gasser will look decidedly half-assed, not least of which because it can’t be fitted with a hardtop or a straight front axle. Finally, a bit more track variety would be appreciated, though hopefully the planned monthly DLC will rectify that.

On the whole, though, Forza Motorsport 4 has come about as close to being the racing game we’d make as any game yet released has. It not only has the ability to help expand your automotive knowledge and enthusiasm, and teach advanced car control, but also has the potential to help you find and interact with people from all corners of the globe who are interested in the same niches of the car world that you are. Making the world a smaller place; who say’s video games are a waste of time? We give Forza Motorsport 4: