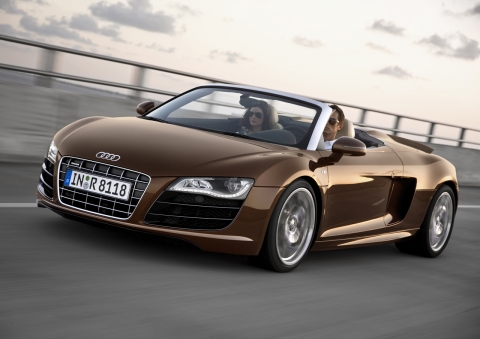 There are not a lot of cars that can transition so effortlessly into convertible form without giving up aesthetics or performance or both. The new 2010 Audi R8 5.2 FSI Spyder is one of those rare sports cars that not only pulls off the drop-top look in style but also gives up very little in street cred. The differences between it and the Coupe are subtle but nevertheless significant. The first thing that strikes you (besides the fact it’s a convertible) is that gone are the trademark side blades, replaced with carbon-fiber air intakes built into the flanks.

The new R8 Spyder features the 5.2-liter V10 engine we’ve all come to know and love, making it good for sprints from 0 to 62 mph in only 4.1 seconds. Top speed is rated at 194.5 mph. Surprisingly, it only gives up 2/10th of a second from 0-62 mph and 1.5 mph in terminal velocity compared to the Coupe. Audi’s new convertible supercar is available with either a six-speed manual or an optional automatic six-speed transmission. Going with the R Tronic affords one the opportunity to drive the car in either fully automatic or manual mode, operated by the joystick on the center tunnel or steering-wheel mounted paddle shifters.

The minute performance lag of the Audi R8 Spyder can be attributed to the extra 13.23 pounds of additional heft and some unavoidable drag. That said, the fact that Audi managed to beef up the bulkhead, sills, center tunnel, rear wall, floor pan and the A- and B-pillars and still keep weight pretty much on par with the Coupe is a feat unto itself.

The soft-top tips the scales at only 66 pounds. The electrohydraulic top opens and closes in a mere 19 seconds and can be operated while driving at speeds up to 31 mph. When the top is opened, the cover crumples “like a Z” into the carbon-fiber compartment over the V10 engine.

There is currently no US launch date provided. The Audi R8 5.2 FSI Spyder will be available in Germany starting the first quarter of 2010 with a base price of 156,400 euros ($228,562). Since the Coupe starts at USD $146,000, I can’t imagine that there will be an $80,000+ premium in the States, so don’t fret. Even though this car is mostly hand-built by the folks at Quattro GmbH, US pricing for the R8 Convertible should fetch a reasonable premium compared to the Coupe.