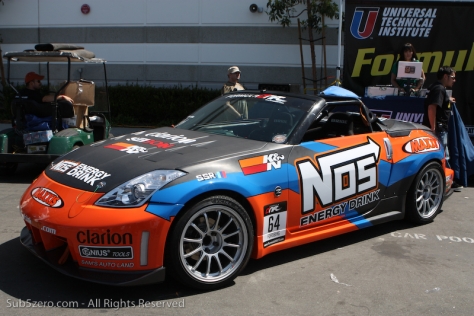 This year, the Formula DRIFT pre-season open house and technical inspections were held at Universal Technical Institute (UTI) in Rancho Cucamonga, CA, about 40 miles east of downtown Los Angeles. It was a nice event with a good turnout featuring all of the Formula D cars passing through a full day of live pre-race tech inspections at an indoor venue on 3 separate lifts at 40 minute intervals. Two new models on the scene this year were in attendance – the Falken Tires Ford 2010 Mustang GT and the RMR / Redbull Hyundai Genesis Coupe. One definite highlight and crowd favorite was watching another modified Mustang on a dyno screaming at a deafening pitch while the audience checked out the readouts on LCD screens above. Oustide, there was a wide variety of drifting cars from various teams showcased along with a smattering of sponsor booths.

Universal Training Institute provides education on all things that go fast – automotive, diesel, motorcycle and marine. At the event, if you were a prospective student, UTI offered tours and program information along with an opportunity to speak with both former and current students as well as faculty. Some of the students are presently working with drift teams in the pit crews. UTI seems like a great place to learn if you are interested in the high-performance, high-tech side of the automotive industry with clean state-of-the-art facilities and no lack of cars to tinker with. It’s definitely very different from your typical mechanic school. UTI has Hod Rod U and Super Street courses in partnership with these magazines. And they have strong ties with the OEMs (including Audi, BMW, Mercedes, Porsche, VW and Volvo) where dealers sponsor individual students to complete highly specialized programs that run anywhere from 8 to 27 weeks.

Overall it was a pretty low-key way to ease into the Formula D season which kicks off on Friday, April 10th at the Streets of Long Beach. We will be providing full coverage of both the “Preview Day” and “Main Event”.