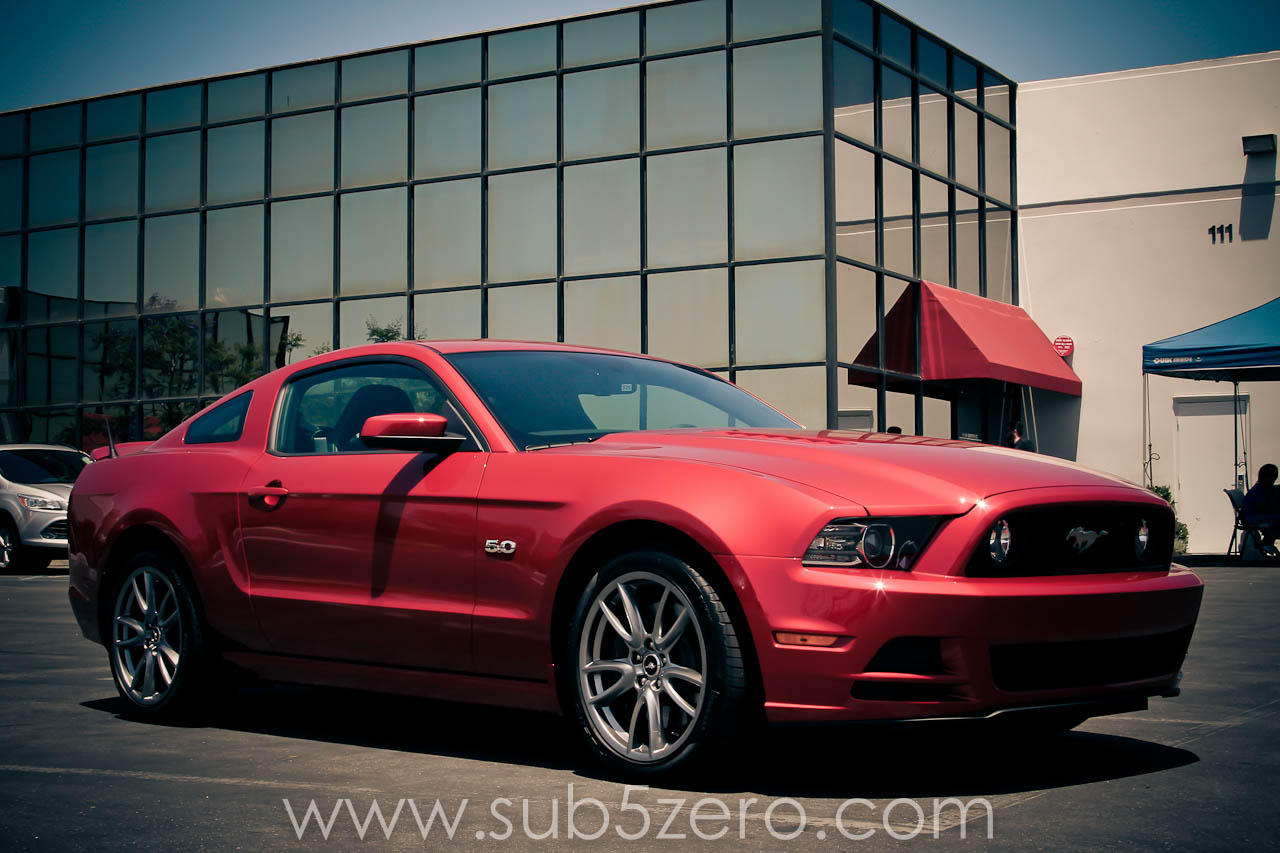 From 1963 to 1969, Ford embarked on a marketing initiative called “Total Performance.” This campaign was built around not only Ford’s involvement in pretty much every major racing series on this dihydrogen monoxide-rich orb (NASCAR, Formula 1, Indy car, drag racing, sports cars, touring cars and rallying), but also the tire tormenting capabilities of the cars Dearborn sold to Joe Consumer. Here in the U.S. of A., that meant things like mountain-motored Galaxies, booming Boss 302 and Boss 429 Mustangs, and wind-cheating fastback Torinos. Suffice it to say, high-test-gulping good times were had by all.

Skip ahead a half century or so to today, however, and the world is vastly different. The act of burning Texas Tea like it’s going out of style has, in fact, gone out of style. These days, the average new car or truck buyer is more interested in things like low operating cost and, in quite a few cases, ecological responsibility than out-and-out speed. Ford is well aware of this, but a funny thing happened when we accepted its invitation to try out some of its latest wares last week: We found that performance is alive and well under the Blue Oval. It just looks and sounds different. 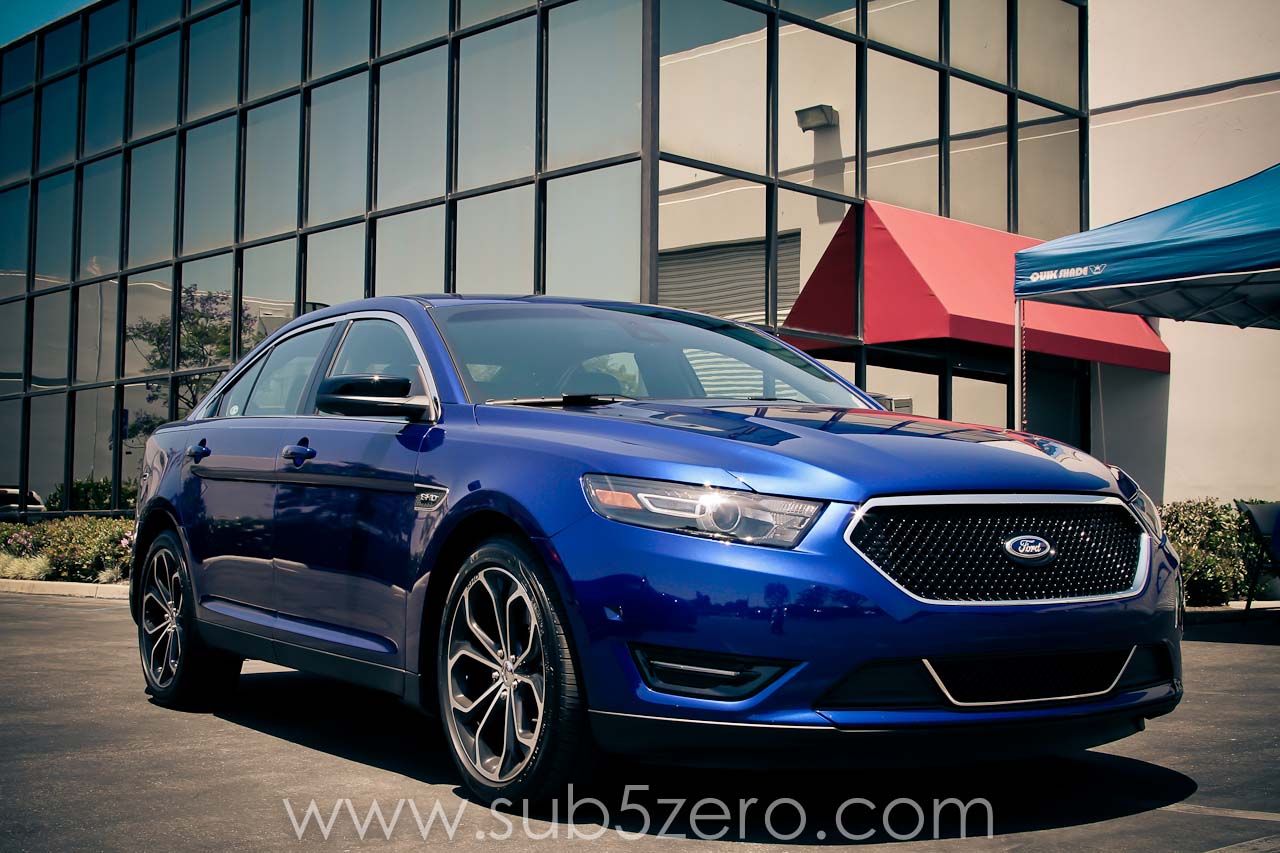 Exhibit A was the 2013 Taurus SHO [above]. Aside from a minor exterior restyle and some other tweaks, it’s the same car that it’s been the last few years, meaning there’s an EcoBoost twin-turbo 3.5L V6 under the hood putting 365hp to all four wheels through a 6-speed automatic with paddle shifters. We knew this big sedan would scoot, but we weren’t quite prepared for just how much. The engine pulls like a freight train, and unlike most torque-converter automatics with paddle shifters, the computer seldom overrules driver inputs. All that and great outward visibility, loads of room and a cavernous trunk? Where do we sign?

Of course, the SHO isn’t the only vehicle offered with the EcoBoost V6. The Flex, which shares the Taurus’ platform, has the same 365hp, but also has seating for up to seven and an optional cornucopia of skylights. It too is comically fast, yet it still manages to garner an EPA estimated 23 mpg on the highway. As road trip vehicles go, it’s mighty enticing. 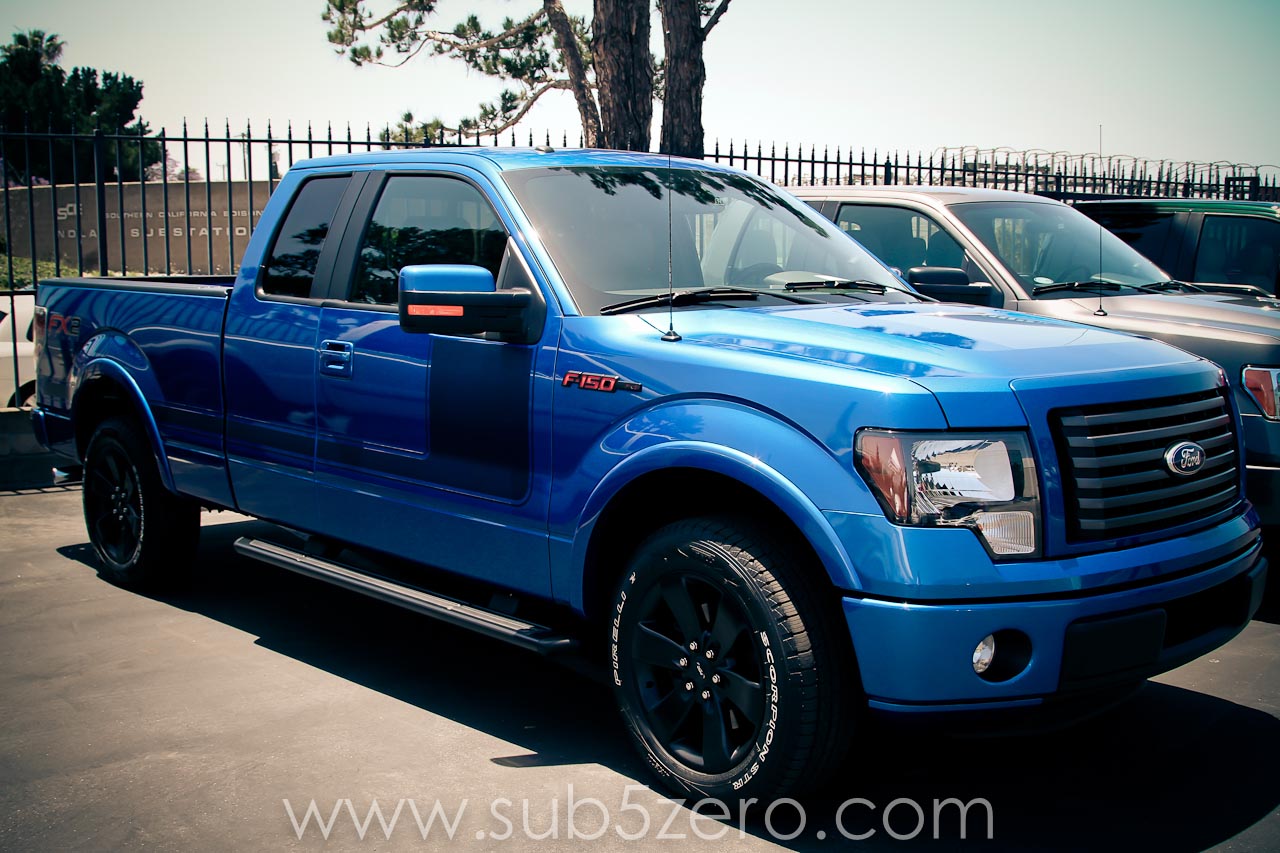 The same can be said of the F-150 EcoBoost. Ford was all kinds of ballsy to put the force-fed V6 in a full-size pickup but, by Henry, it works. Power is the same as the Taurus SHO and Flex, but torque is up by 70 to 420 lb.-ft. Not only is that figure higher than that of the 5.0L V8, but it comes at nearly 2,000 fewer revs (though there is a tiny pinch of turbo lag when you first mash the go pedal). And you can tow up to 11,300 lbs. And the most impressive stat of all? That would be the estimated 22 mpg highway in rear-wheel-drive guise. No wonder it’s a huge seller on the already huge-selling F-150.

Naturally, if EcoBoost can help a V6 take the place of a V8, it can also help a four-banger stand in for a V6. That was the thinking behind the completely new 2013 Escape [below]. Instead of its predecessor’s 3.0L V6, the top engine on the popular crossover is now a turbocharged 2.0L inline-four rated at 240hp and 270 lb.-ft of twist. Oh yeah, it has no problem getting out of its own way, and the chassis is nicely sorted to boot. We (nor, presumably, most of you folks) hardly lust after crossovers, but were we at a different place in life(i.e. married with a small child or two), the new Escape would be on our shortlist. 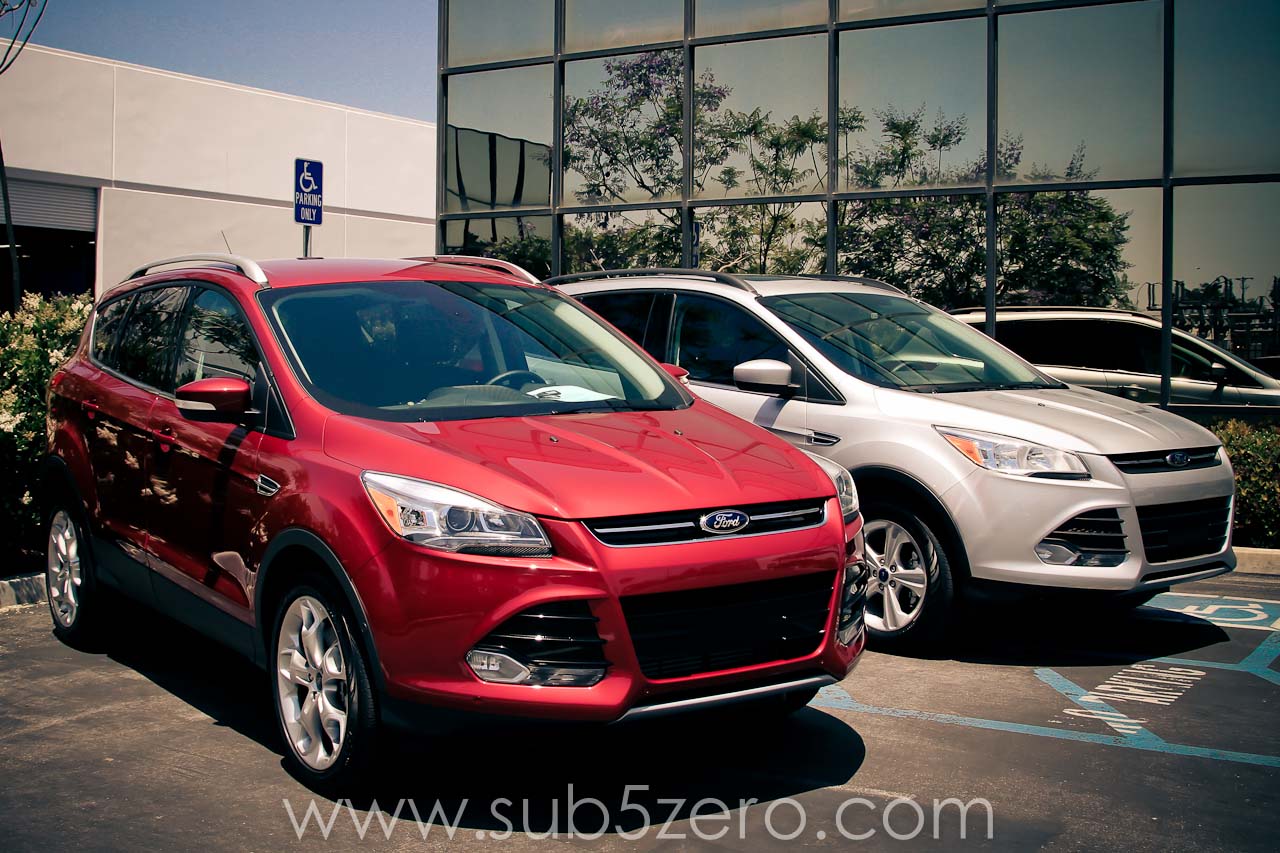 However, for some people, there’s simply no replacement for displacement, and we can report that the three normally aspirated models we sampled suggest Ford hasn’t forgot about these customers, either. The base Mustang, in case you didn’t get the memo, is a secretary special no more; the 3.7L V6 generates 305hp (equaling the 2005 Mustang GT’s 4.6L V8) and returns 31 mpg highway with the optional 6-speed automatic. It’s also quick, but it’s no match for the Mustang GT. The 5.0L “Coyote” V8 throws down with 420hp and an exhaust note that will make any American gearhead who stepped off a time machine from 1969 feel right at home.

But if you want something truly outlandish, you can step up (literally) to an SVT Raptor [below]. It may be the first off-roader from the Special Vehicle Team, but you wouldn’t know it by driving this dune-hopping F-150. While our prescribed-by-the-hosts test loop around a chunk of the South Bay region of Los Angeles County sadly didn’t include any dry riverbeds or rock crawling, we were resoundingly impressed by the Raptor’s docile on-pavement manners…at least until we mashed the gas pedal, uncorking the 6.2L V8’s 411hp and Baja 1000-worthy soundtrack. Still, we’re hoping Ford gives us a chance to play in the dirt with one… 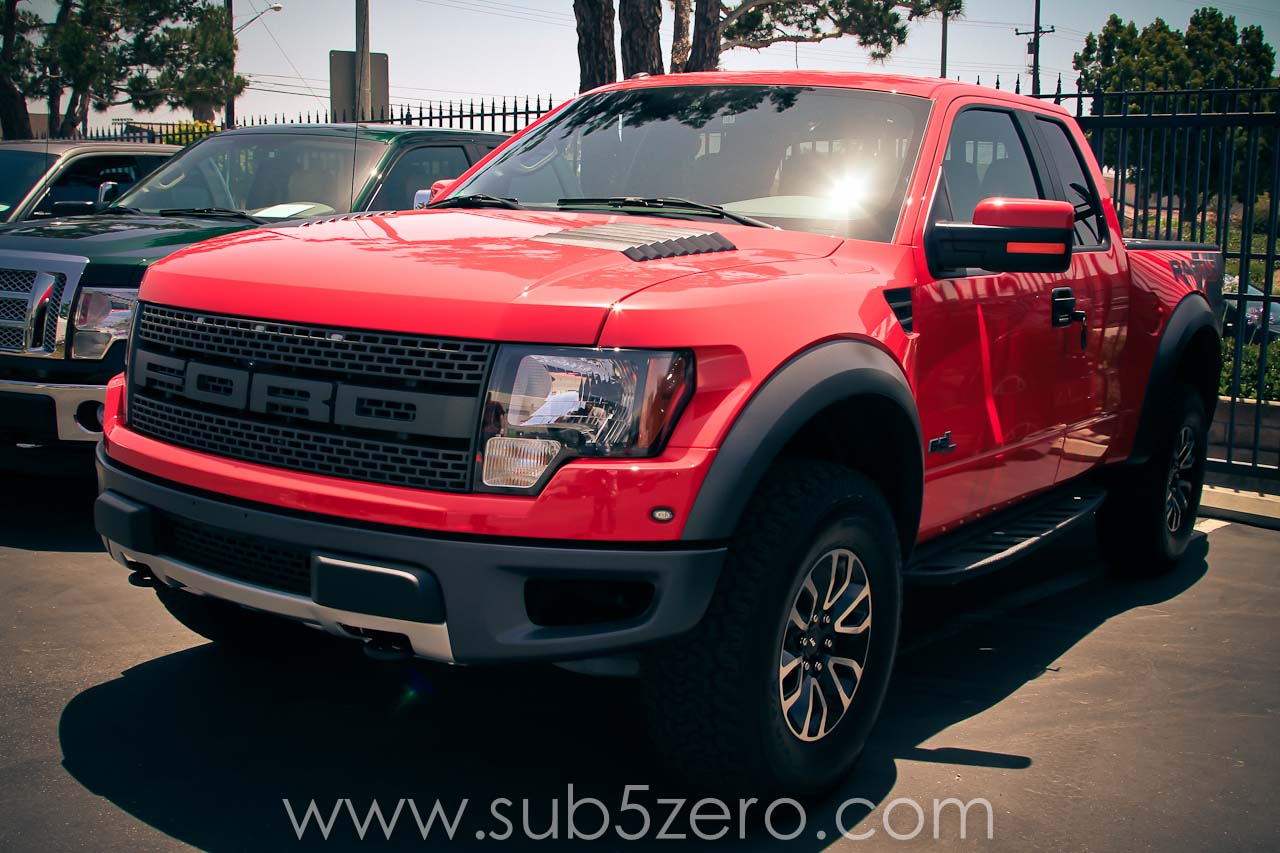 Finally, there’s the vehicle that was in many respects our favorite of the bunch. No, it wasn’t turbocharged, nor did it sound like one of Chuck Norris’ hiccups. In fact, it didn’t really make any sound. We speak, of course, of the Focus Electric [below], a petrol-free version of the Focus five-door that will be humming into Ford dealers in select markets soon. Sure, it goes up to 76 miles on a charge (or the equivalent of 100 miles per gallon of gas), has regenerative braking to help extend the range, the seat upholstery is made from recycled materials, you can monitor and schedule charging via a smartphone app, blah blah kumbaya. But here’s what the sales literature doesn’t tell you about the Focus Electric: It’s fast. Genuine, you’ll-giggle-like-a-schoolgirl fast. Plus the steering and suspension are just as dialed-in as they are on the gas-powered Focus. 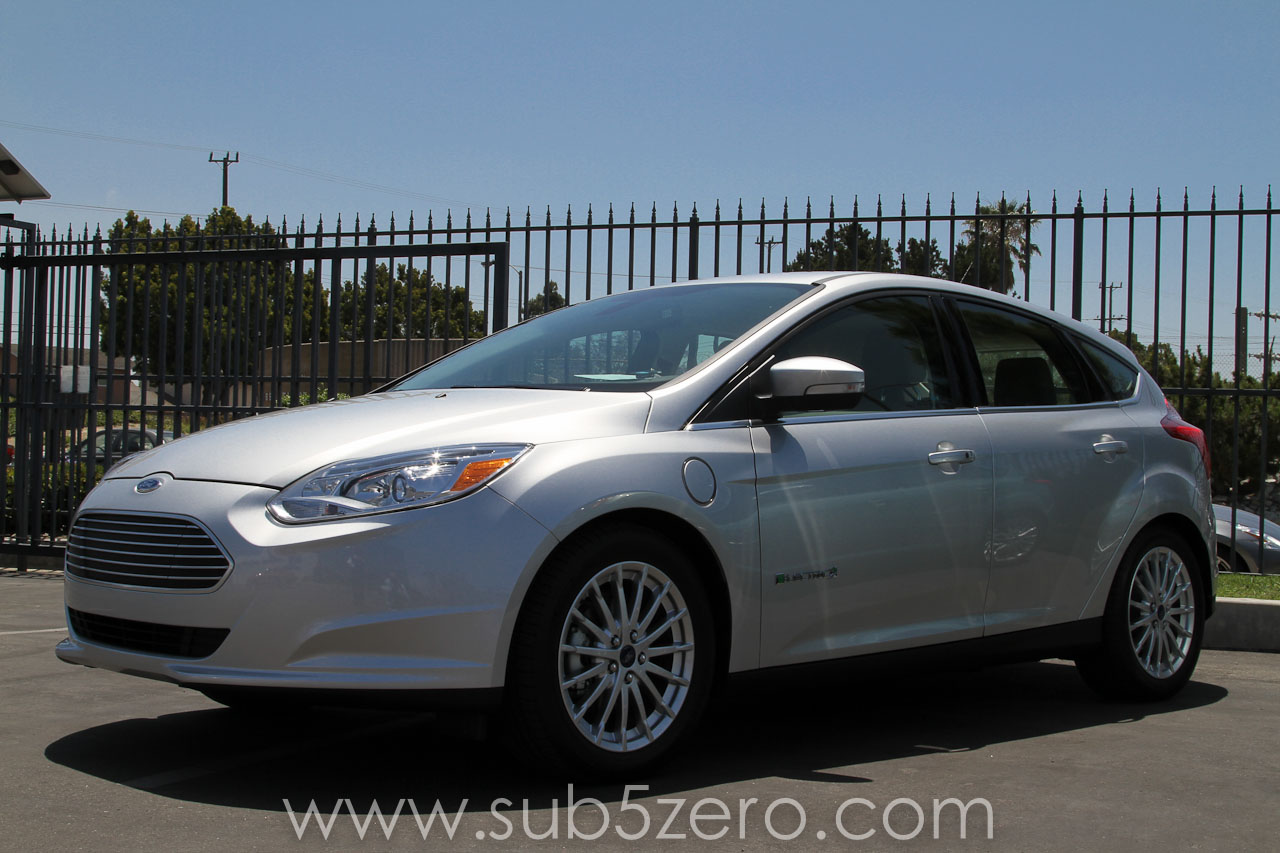 No, it’s not cheap ($39,200 base price before applicable tax credits and other perks), but early adopters are usually the ones to shell out the big bucks for new technology. And since the electrification of the automobile is, like it or not, almost inevitable, it’s good to know that Ford intends to keep the performance flag flying well into the future, even as the means of attaining performance change and evolve.