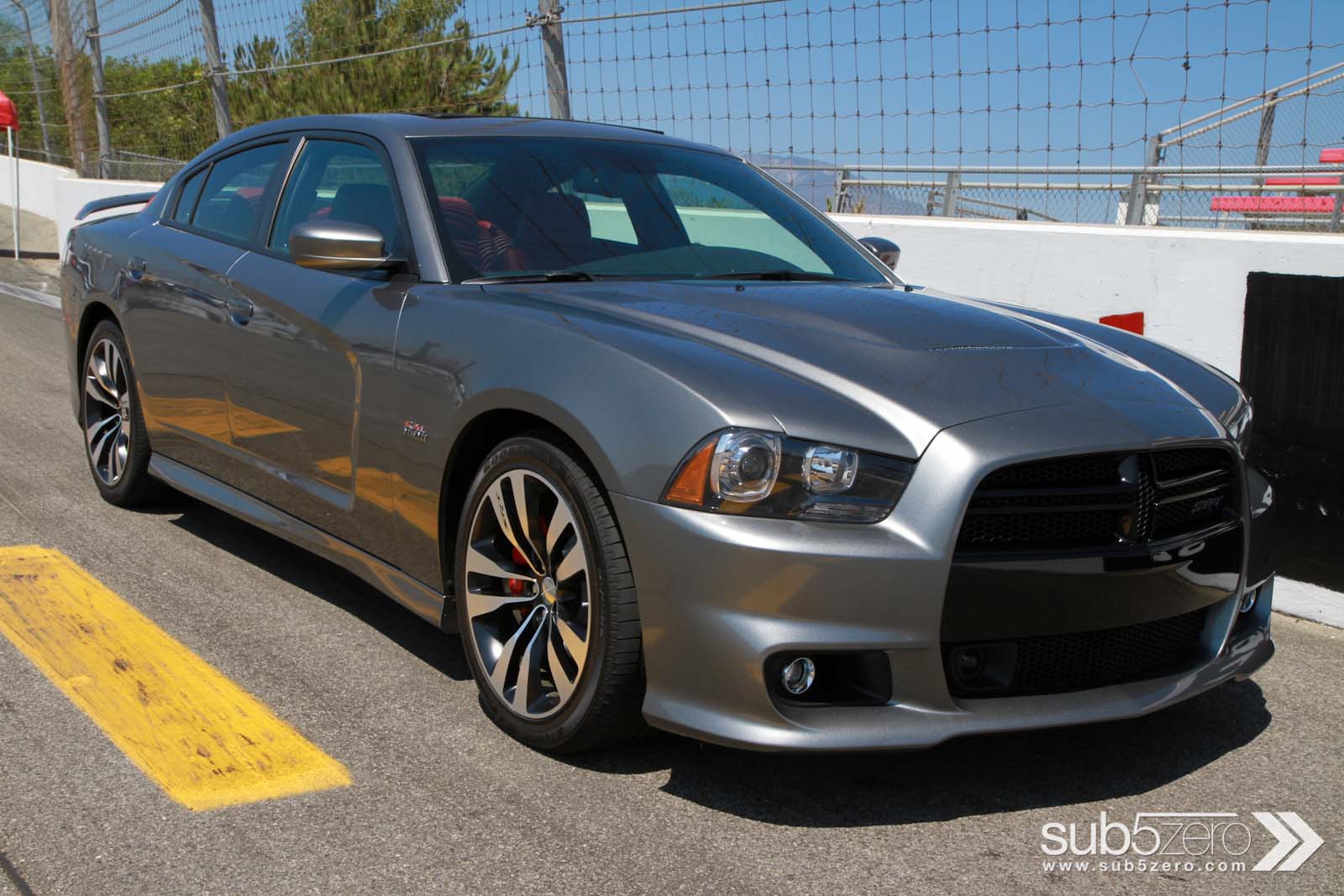 What if you could have American muscle car physicality,  Japanese technological finesse and German precision all in one vehicle? And what if this amalgamation was tucked into an aggressive but unassuming package that didn't break the bank? Introducing the 2012 Dodge Challenger SRT8… This is a car which easily elicits praise as its power, gadgetry and accoutrements are a surprising development from a platform that has historically underwhelmed us. 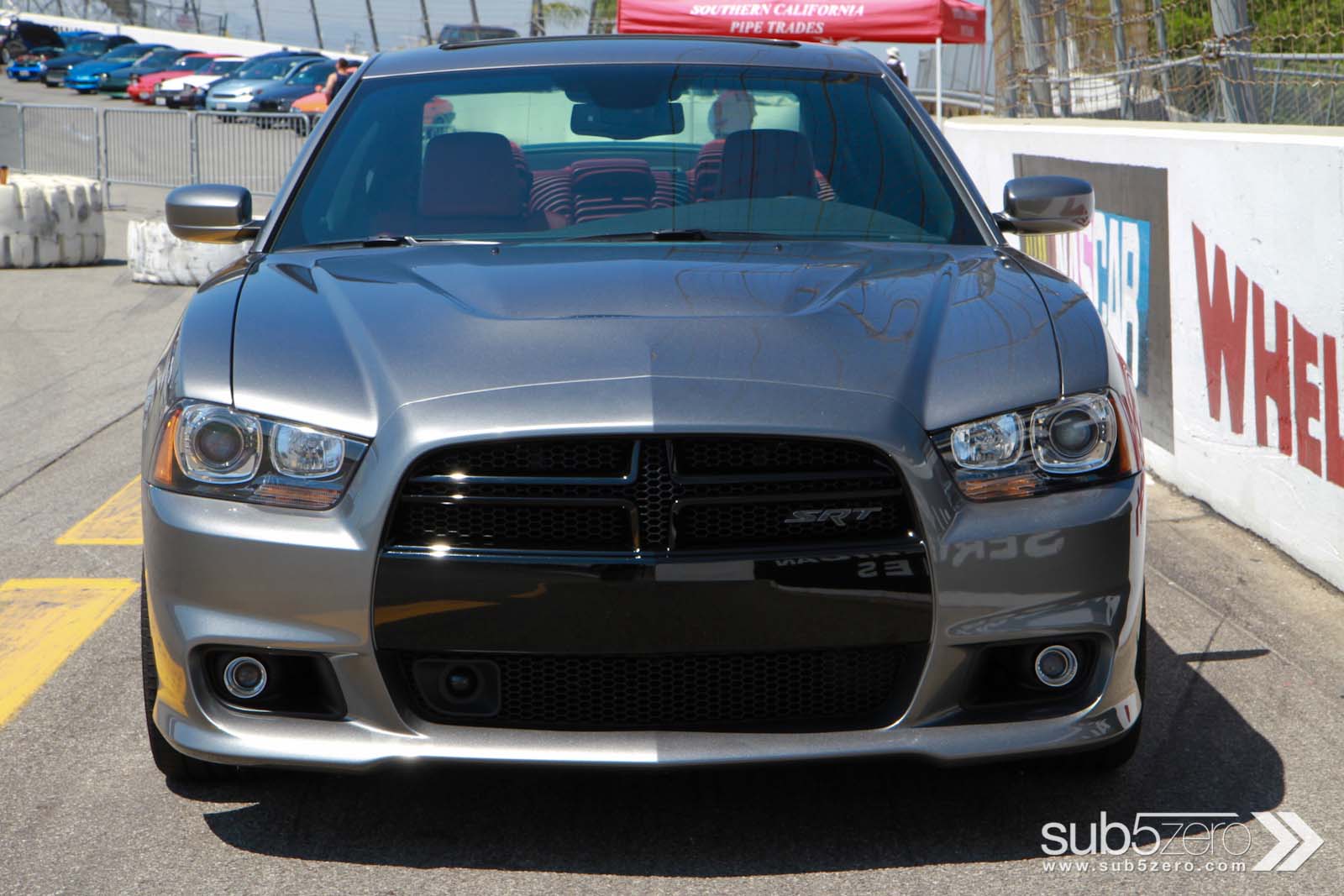 The Charger is, for all intents and purposes, a four-door version of the Challenger, but its design language now much more closely resembles the historic Charger styling than the previous iteration (with the exception of the four doors).  The most notable examples are the deep and long side scallops that run from just aft of the front mirrors and sweep all the way to the rear. The ground effects,  including the aggressive front fascia, side skirts and rear apron, are chiseled-looking and give the car its aesthetic edge. But the blacked-out grill with the signature Dodge crosshairs sitting inside a large Evo-esque mouth make the car look like a land shark, ready to eat up and spit out anything in its path. In the rear, the Charger once again reclaims some of its storied past, with an updated version of the tail lamps that reach across the entire back-end illuminated with 164 LEDs. The spoiler may seem like overkill but it's actually a functional enhancement and adds to the car’s sporting aspirations. 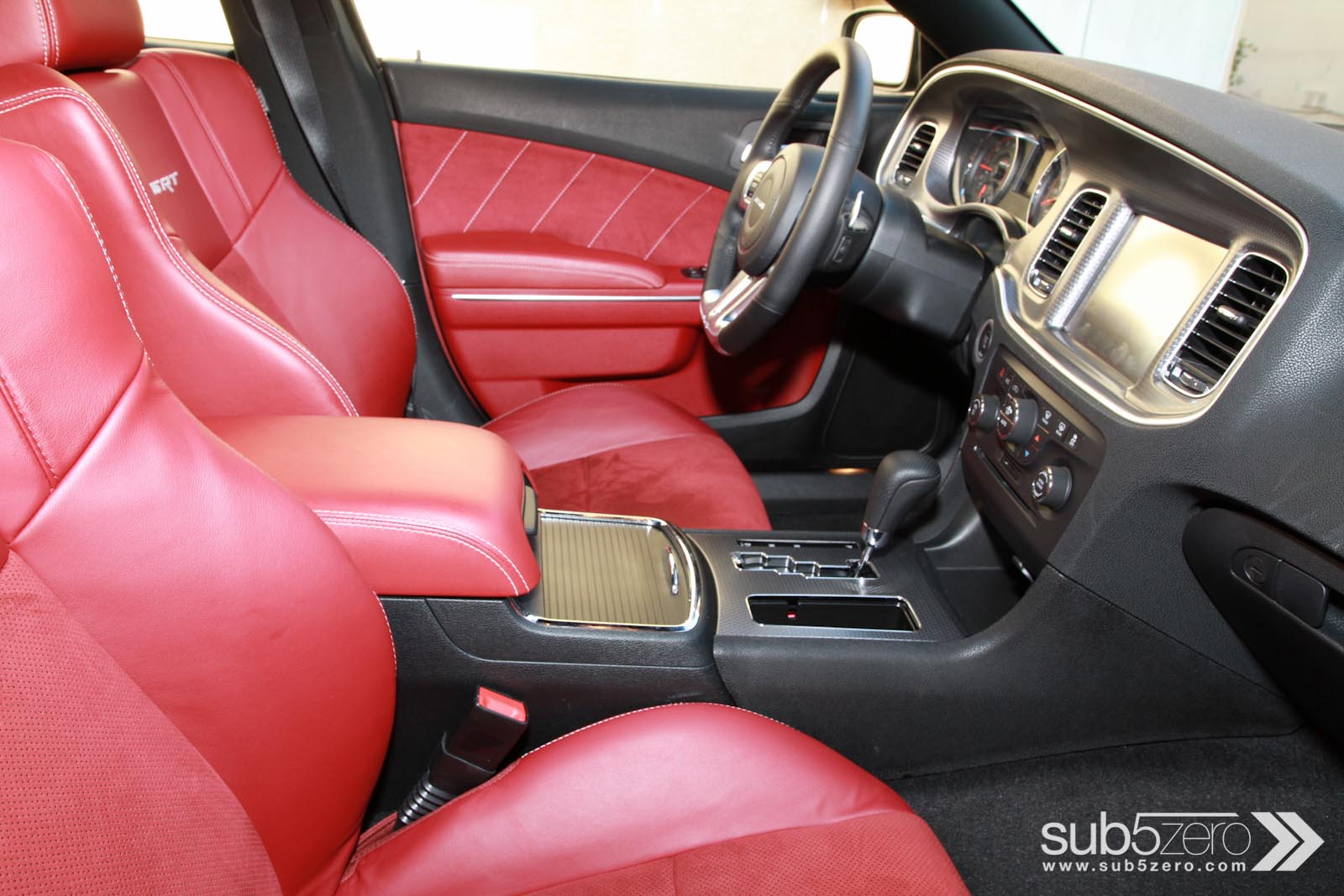 The inside of the 2012 Charger SRT8 is downright slick and puts the Chevy and Ford muscle cars somewhat to shame. The nicely bolstered Napa leather sport bucket seats offer 12-way adjustable power with both heating and ventilation as well as pinhole suede inserts that add a touch of styling flavor. Our model has bright red upholstery and, while a bit flashy for our tastes, offers a rich visual experience when combined with the ornate dash bathed in silver carbon-fiber. The flat bottom, leather-wrapped SRT steering wheel is also a nice touch. 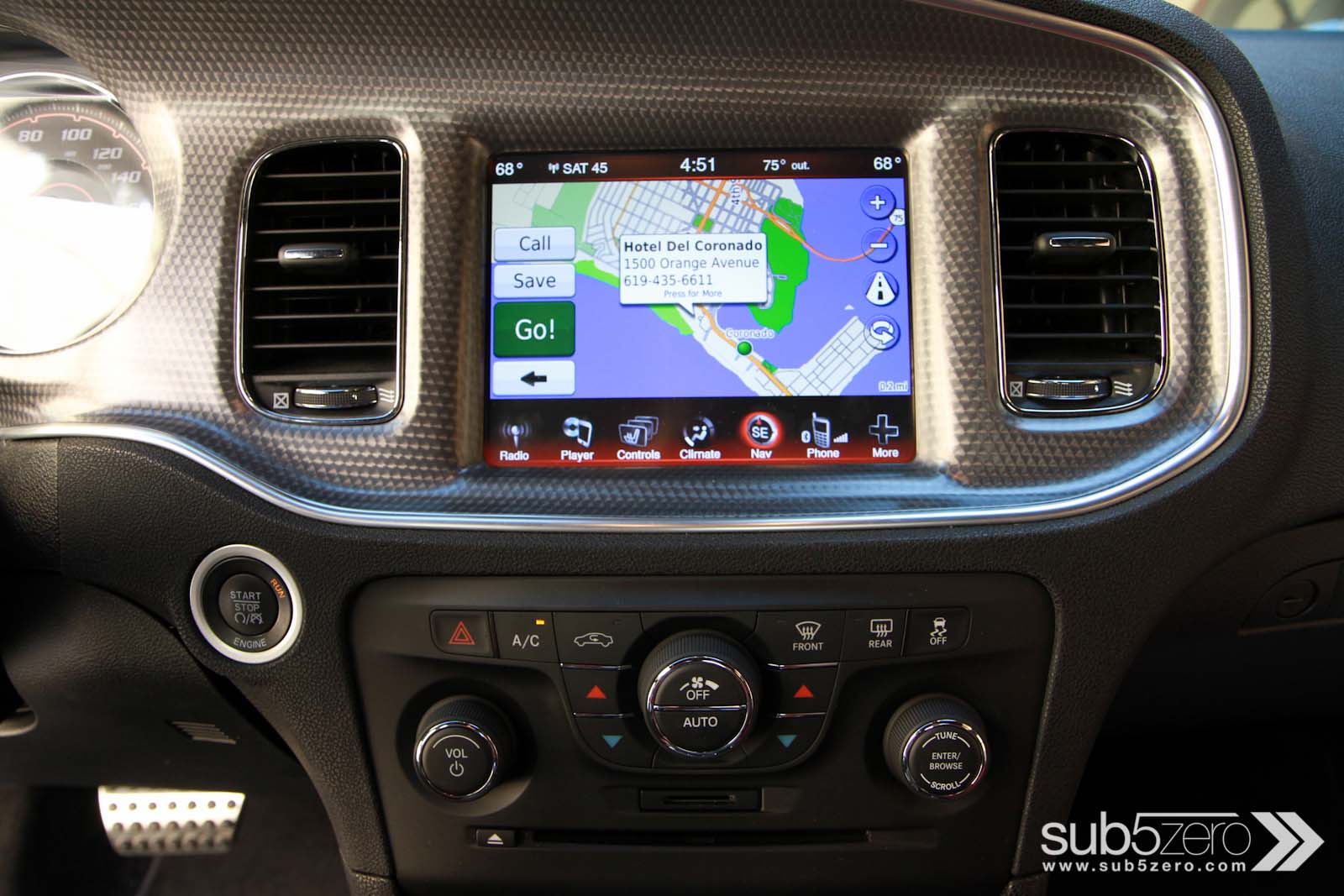 One of the outstanding highlights has to be the fresh-out-of-the-box 8.4-inch touchscreen display that looks like an iPad has been stuffed into the center dash position. The user experience is something right out of Apple's playbook with large visually stunning graphics that allow for navigating the audio and climate systems, Garmin-powered GPS navigation, and phone controls. Scrolling through the menu options and clicking on ‘Driving’ will reward you with ‘Performance Pages’, a set of uber-cool gauges and digital readouts that track speed, horsepower, torque, acceleration and  braking as well as a host of other performance metrics.

But the fun doesn't stop there, oh no… Other niceties include keyless entry, push button ‘Start’, rear cross-path detection, rain sensitive windshield wipers, automatic headlamps, power sunroof and even heated and cooled console cupholders. The blind-spot monitoring system works well with mirrors that blink when a car enters a blind spot and beeps that sound when the turn signal indicates an imminent turn into a danger zone. The rear back-up camera is also solid and even features directional guidance lines that show vehicle trajectory based on wheel angle.

One of the best features of the new Charger SRT  has to be the sound system which will blow your socks off. Harmon Kardon got the nod to create the system and we must truly raise our glasses. Many automobiles with spec sheets listing things like 900 watts, 19-speakers and a 12-channel amplifier, such as the SRT8, somehow always seem to disappoint with mediocre components and overexagerated  numbers. In this case, HK sourced their GreenEdge speakers and put them to work in the form of seven 3.5-inch mid-range speakers, seven integrated tweeters, four 6×9 thumpers and one 10-inch subwoofer. The result is an outstanding system that is clean and balanced with punchy sound that puts many luxury offerings to shame. The system accepts CDs, DVDs, MP3 and also offers SiriusXM satellite radio to pump through the speakers. 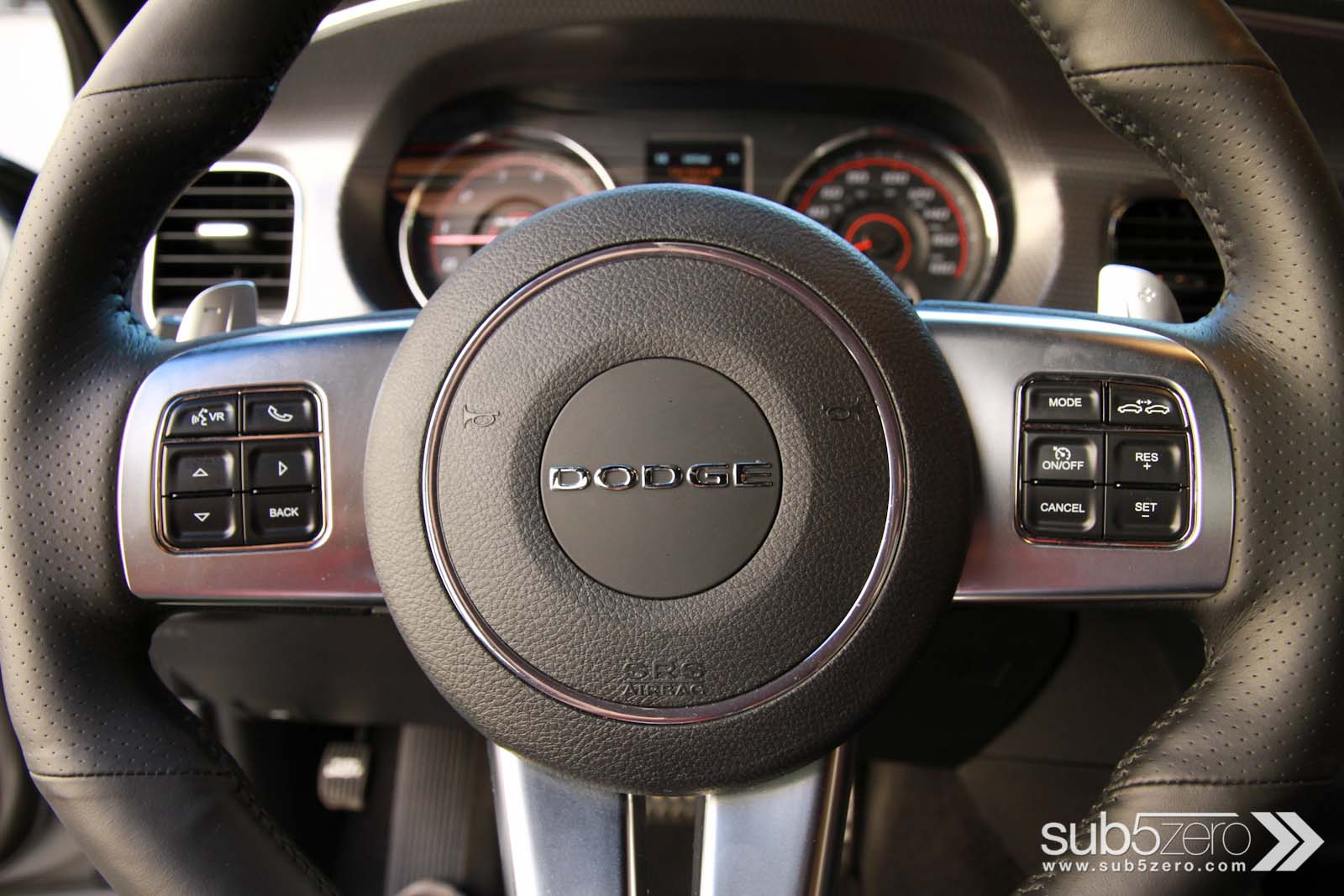 The adaptive cruise control system is one of the most user-friendly we've come across and, along with setting a cruising speed, you can also set distances of either one, two or three car lengths from the vehicle in front with the push of a button on the steering wheel. The Charger will accelerate or brake in order to maintain the appropriate distance and/or set cruising speed. 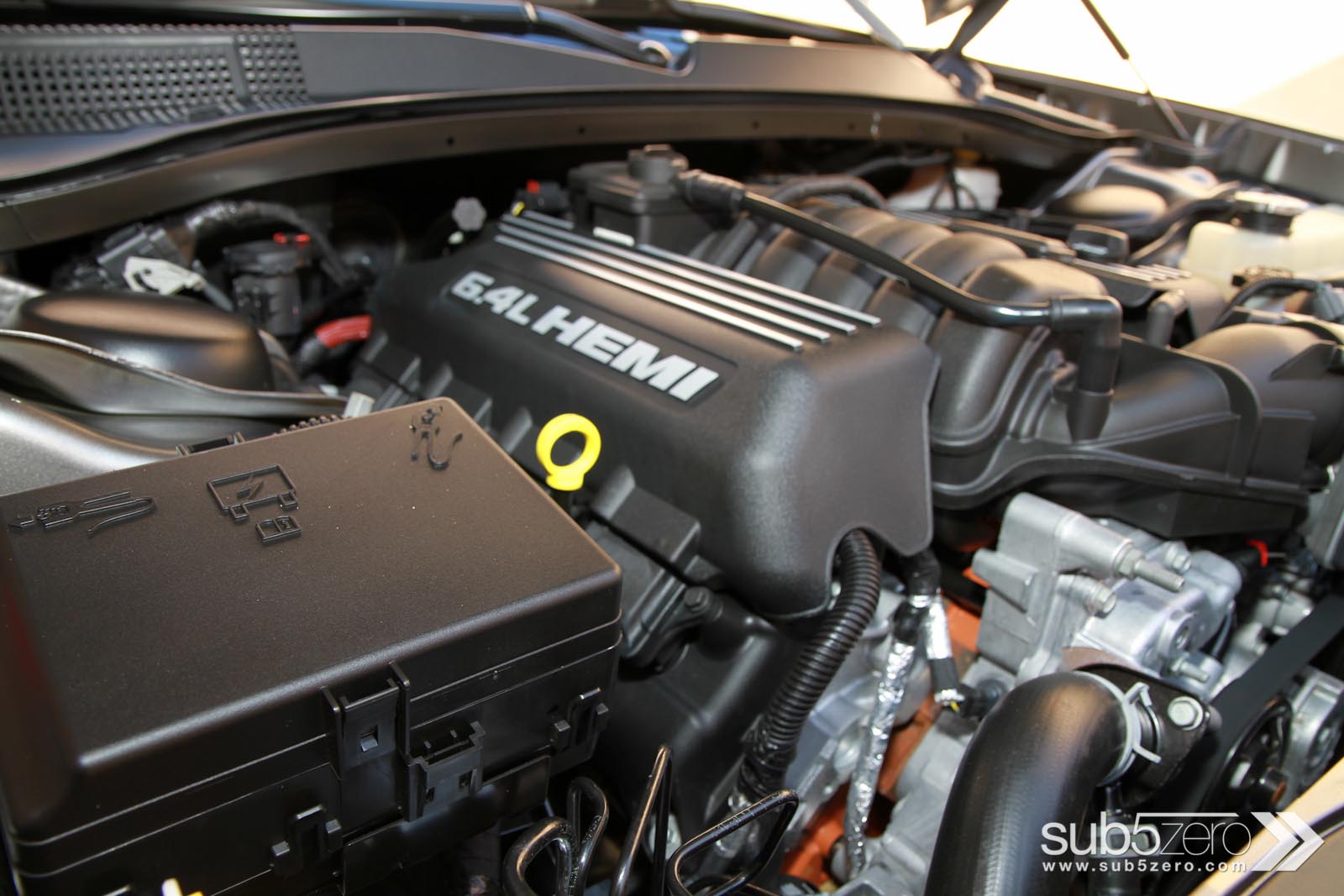 With a 6.4-liter V8 engine,  470 horsepower and 470 lb-ft of twist, the new Charger SRT8 is in a league with challengers such as the BMW M5 and Mercedes E63 AMG. The storied 392 Hemi is back with old school push-rod locomotion. But this time around it doesn't need nitromethane and a supercharger to do serious damage like the converted drag racers back in the late 50’s and early 60’s. Acceleration comes fast with 0 to 60 mph runs in 4.6 seconds from a standstill, which is not too shabby for a vehicle that tips the scales at 4,350 pounds. Fuel economy is rated at 14 mpg in the city and 23 mpg on the highway, which is pretty commendable for a vehicle with this much hutspa. Variable valve timing allows the car to quickly adjust to situations requiring power or economy by way of independently operated cams. One other reason that fuel economy is maintained is the "Fuel-Saver" cylinder deactivation system that drops down to 4 cylinders during cruising. The process is seamless and effective.

The exhaust note is simply thrilling with an active valve system that delivers a resounding bellow from straight-through mid and rear mufflers that come on under engine load. The independent suspension adds a bit of tech wizardry with a two-mode adaptive system that feeds in lots of data such as vehicle speed, lateral acceleration and steering angle to vary the stiffness of the stocks. The result is a vehicle that is surprisingly flat, composed and agile for such a brute. Stopping power comes by way of monster four-piston Brembo calipers gripping slotted and vented 14.2-inch rotors up front and 13.8-inch rear discs that reign in the Charger quickly and effortlessly. In addition, Dodge has tossed in an underbody shield that incorporates brake ducts that reduce brake fade. 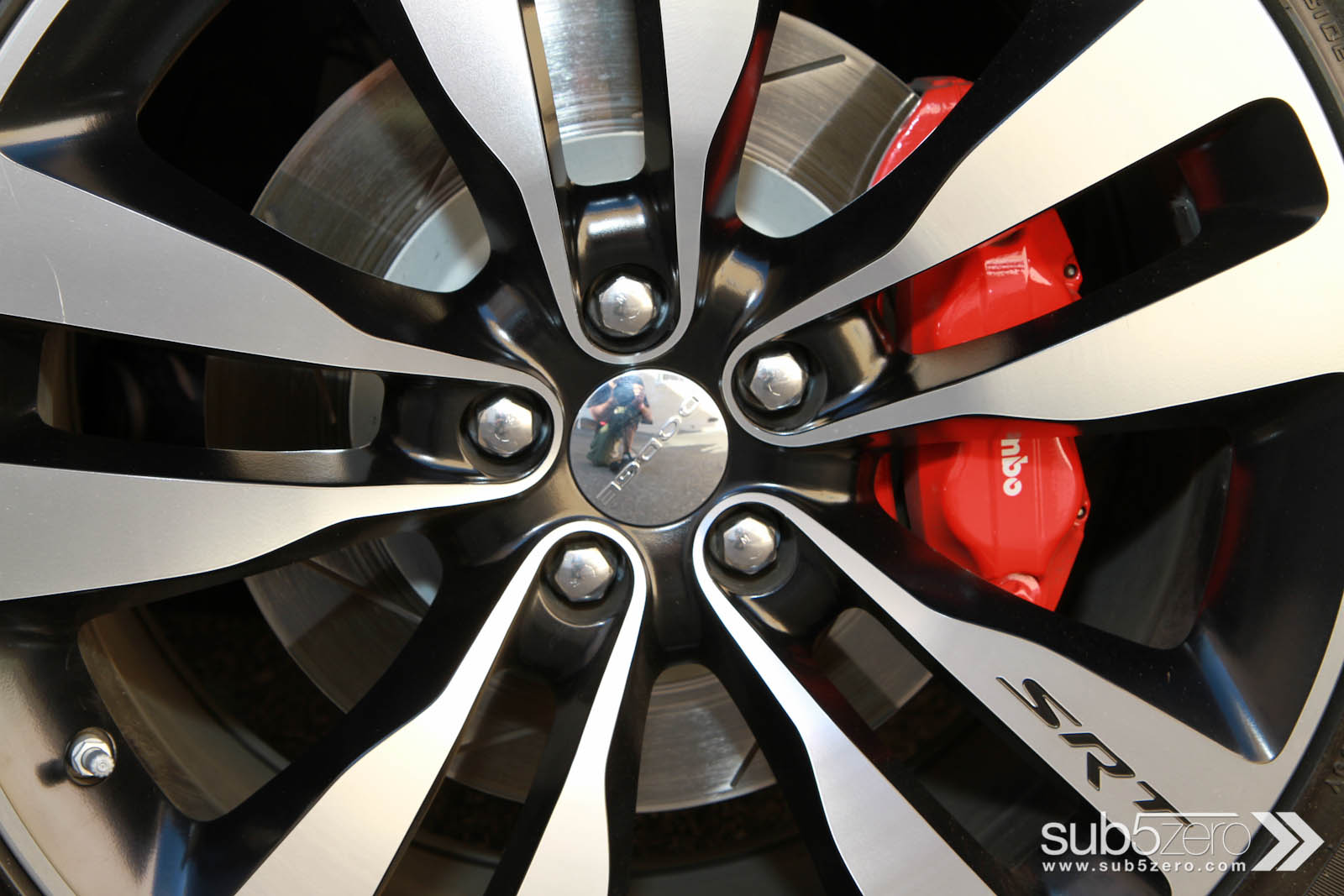 Standard fittings includes 20-inch by 9-inch forged alloy wheels wrapped around 245/45/R20 Goodyear Eagle BSW 3 season performance tires. The steering wheel incorporates slick shifter paddles that are easy to operate. The only potential downside is the fact that audio controls are also located on the backside causing a piano-playing experience requiring memory and digit dexterity. The automatic transmission only sports 5 gears but the torque band is so thick that missing a 6th gear ain't no thang. Two modes are available – Auto and Sport – with the latter  a more aggressive variation that both holds gears longer and stiffens up the suspension. 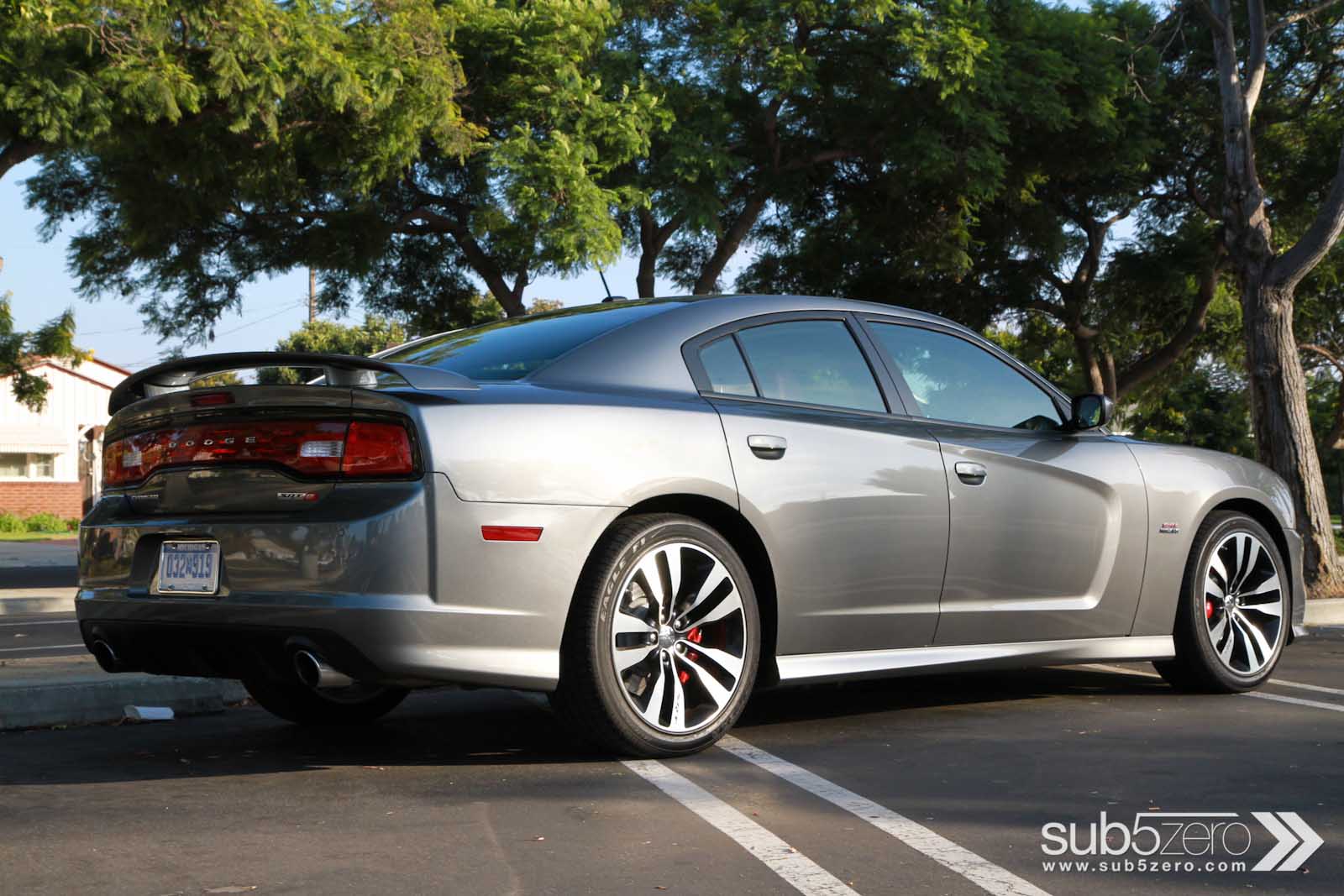 Our models comes in at $50,260 including few add-ons and charges such as the Driver Confidence Group ($795), Cruise Control Group ($795), Power Sunroof ($950), 3 season performance tires ($150) and, of course, the dreaded gas guzzler tax ($1,000). If you’re a fan of the Dodge Challenger and just need four doors, the Charger is your savior. If you need a little more refinement and luxury, then the Chrysler 300 SRT8, which sports the same performance specs, delivers similar exhilaration in a more demur package. In any case, Chrysler has created a family of muscle cars that is truly stellar and well-deserving of our exultation.