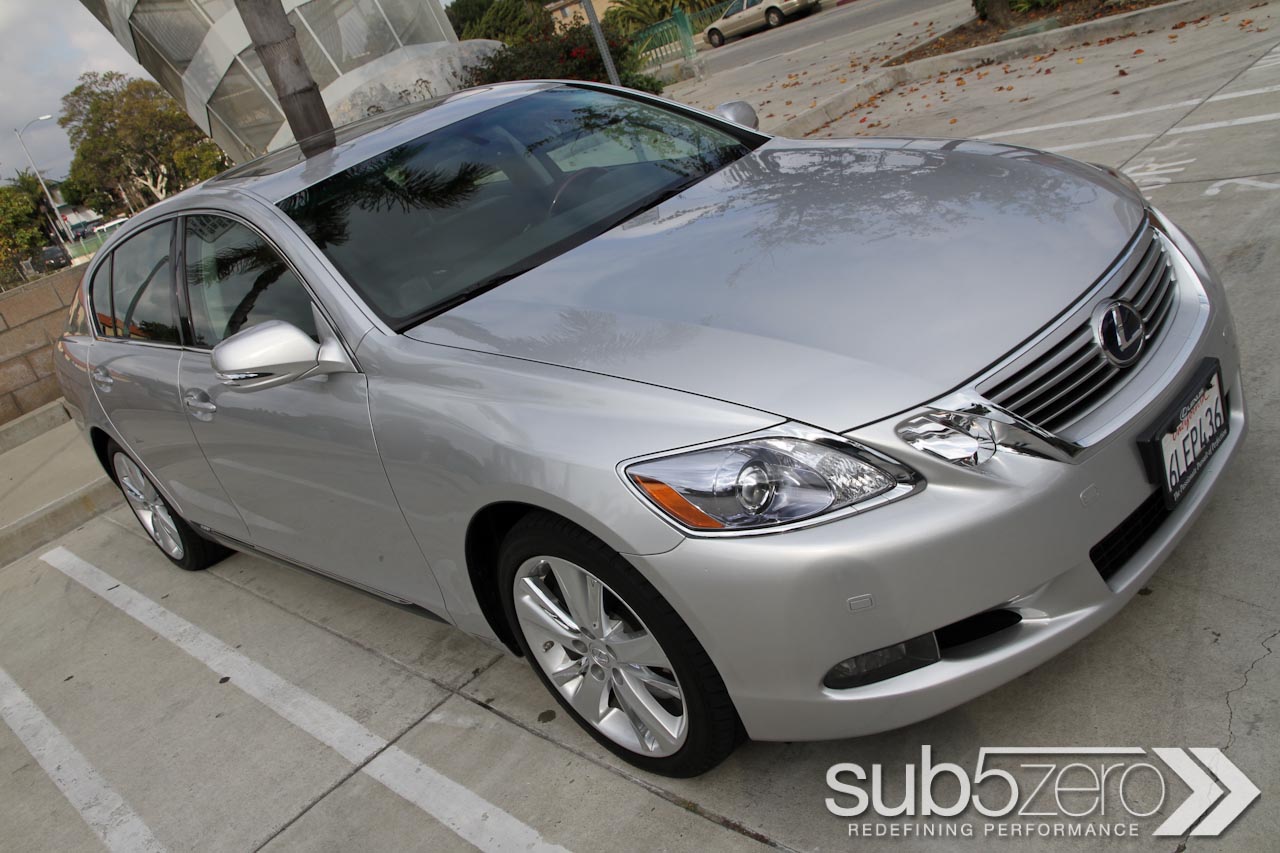 Behaving like a caveman coming upon an iPad for the first time, my initial experience with the 2011 Lexus GS450h was as much disorienting as it was awe-inspiring. As I pushed the Start button, watching the telescoping wheel rise up (like Phoenix from the ashes?) and the dashboard illuminate, I waited for something to happen (hello?–earth to engine?). Nothing. Another try. Nada. After my 4th attempt the light bulb finally went on and I realized that this car, a hybrid variant of the strong-willed GS, actually starts silently (and I mean silently). It’s even absolutely quiet in reverse and at low speed cruising forward. But lest you now assume that the driving experience itself is a snoozefest of epic proportion, I can assure you that it is anything but…

In reality, the more svelte rear-wheel drive V8-powered GS460 must bow to the GS450h in the performance category, giving up 2/10ths of a second to the hybrid (which sprints from 0-60 mph in just 5.2 seconds). Fuel economy is rated at 22 mpg in the city and 25 mpg on the highway, so we’re not talking about a car that will encourage you to cancel your BP gas card anytime soon. No, sir. This is a car that uses its electrical prowess to supplement its gasoline counterpart and in the process delivers an unexpected and downright thrilling performance. 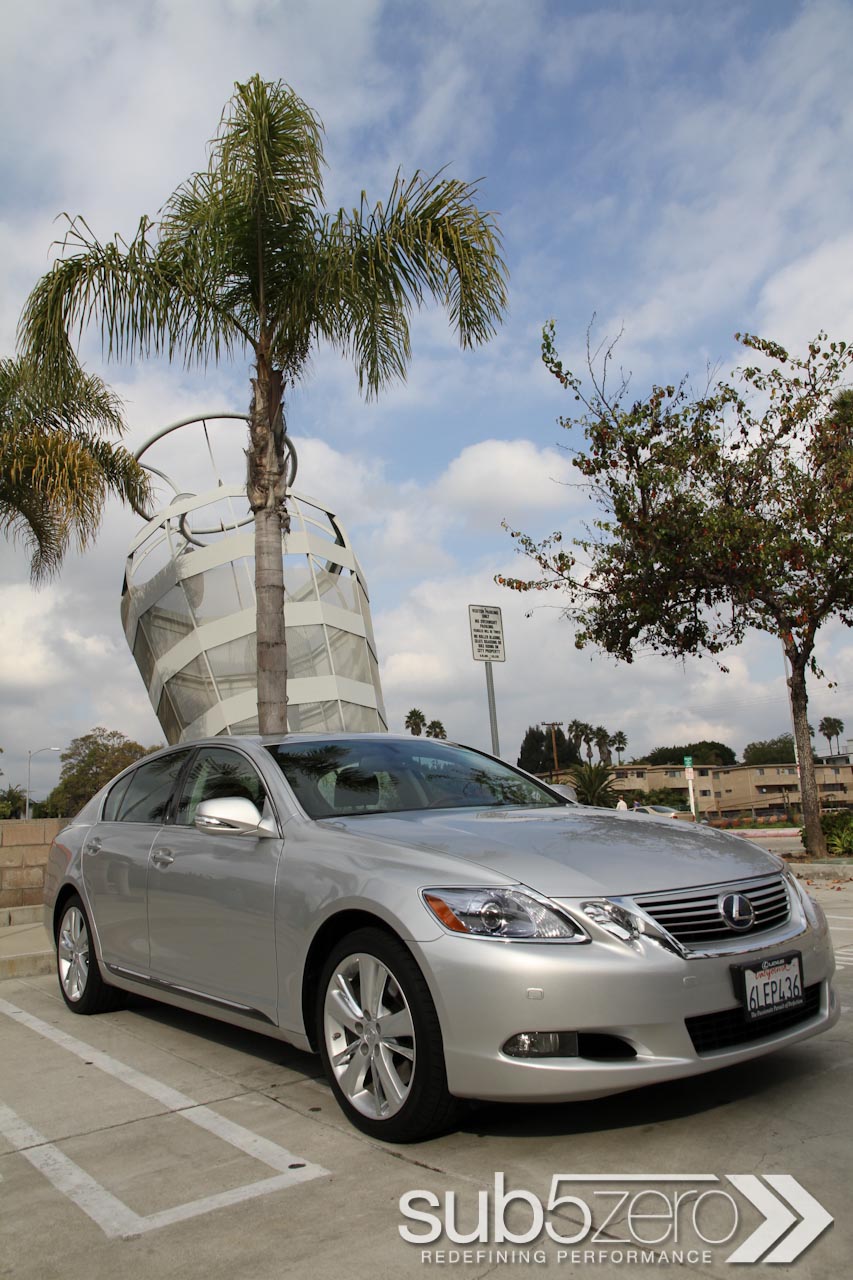 The GS450h has a simple and elegant design that is simultaneously aggressive and understated. Its sharp, clean lines give it a uniformly sculpted look from front to back. Toyota invested significant time and resources for the aerodynamic tweaks to streamline the GS and was rewarded with a drag coefficient of only .27 and a subtle hint of athleticism. (This may well be the last year for this body since the fourth-generation version is most likely right around the corner.) 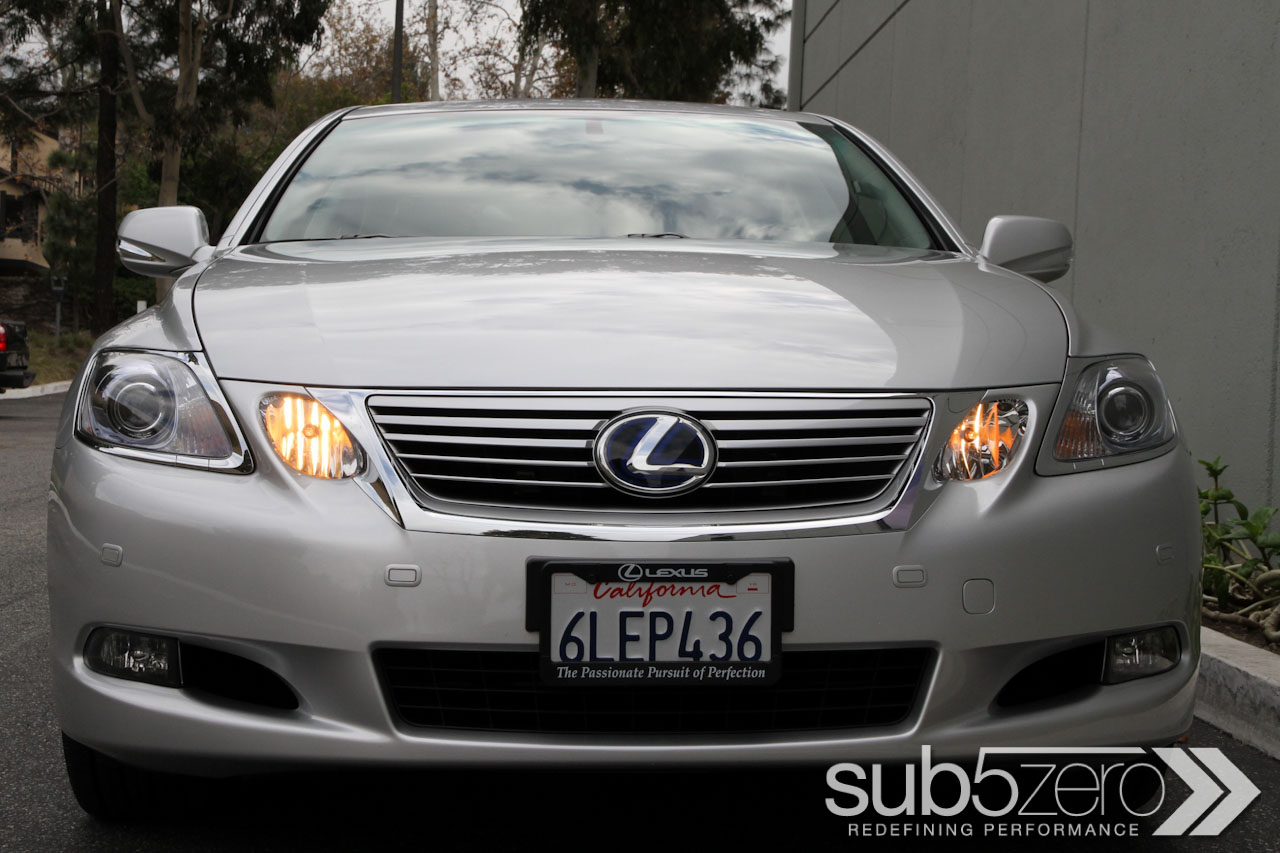 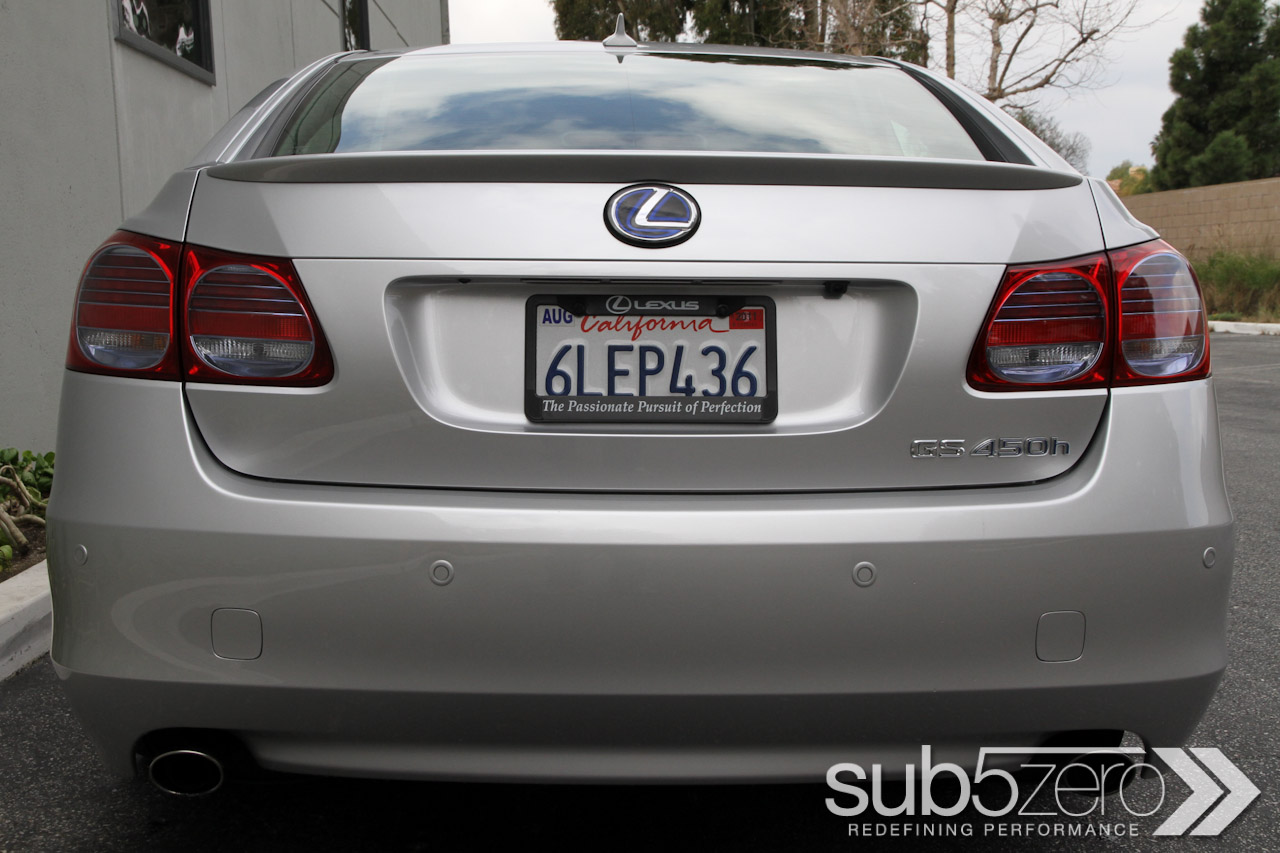 A mid-cycle refresh delivers an updated front fascia (flatter bumper, revised lower air intakes and chrome grill), high-intensity discharge headlights, turn signal indicators mounted in the side mirrors and some predictable color palette revisions. Criticism of the styling usually focuses on the disparity between the sleek front and the chunky back. But for my taste, I felt pretty damn good cruising the streets of Los Angeles in the GS450h even with the never-ending parade of luxury contenders in our midst. 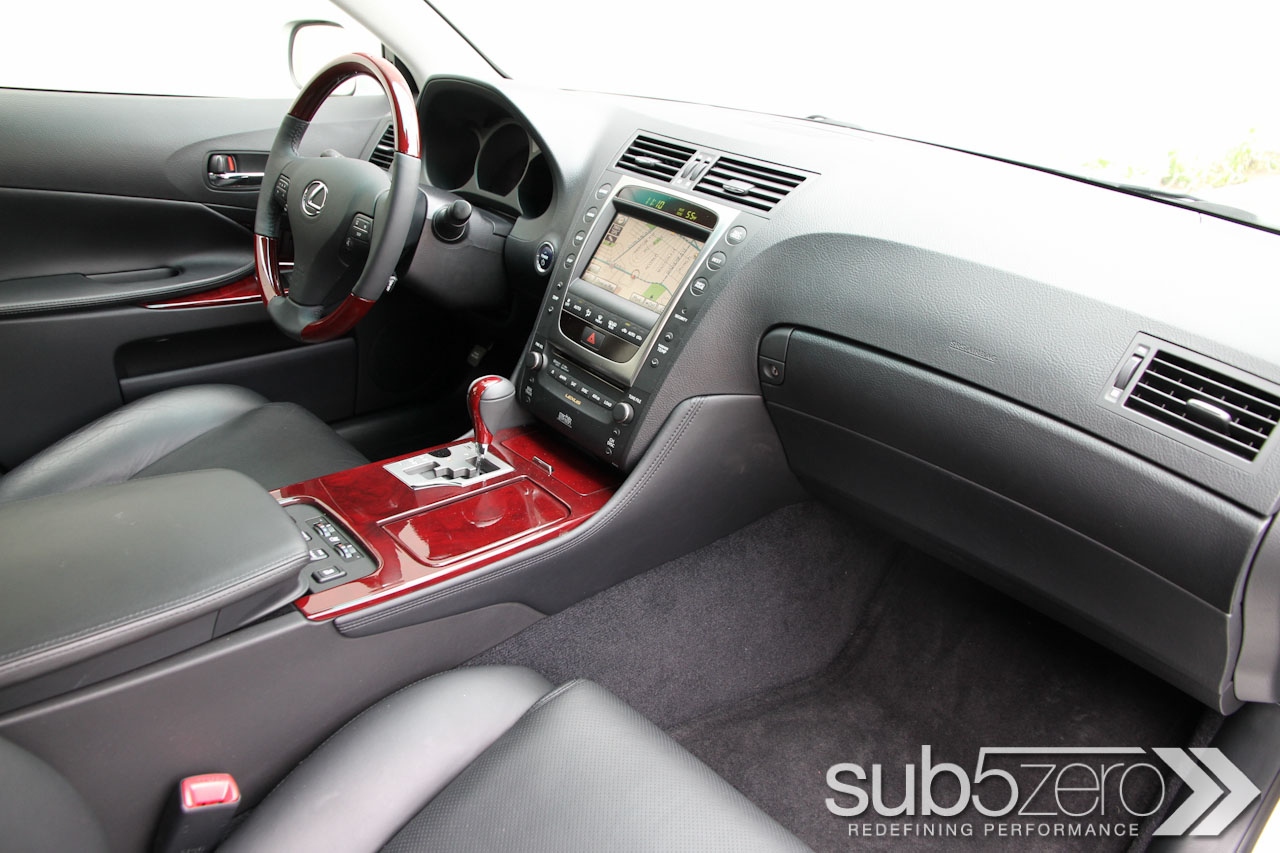 The interior is both subdued and luxurious in keeping with the automaker’s theme of function over flash for this baby. There appears to be the perfect mix of buttons and controls working in tandem to direct the 7-inch infotainment system. Many vehicles in this class have cockpits which resemble that of the Space Shuttle Discovery but Lexus, fortunately, bucked the trend. The only possible spot for some confusion is the drop-down compartment mounted below the dash (left of the steering wheel) which contains a massive collection of buttons to handle things such as mirror collapse controls, trip meters, interior light brightness settings, parking assist on/off, automatic rear shade, etc. 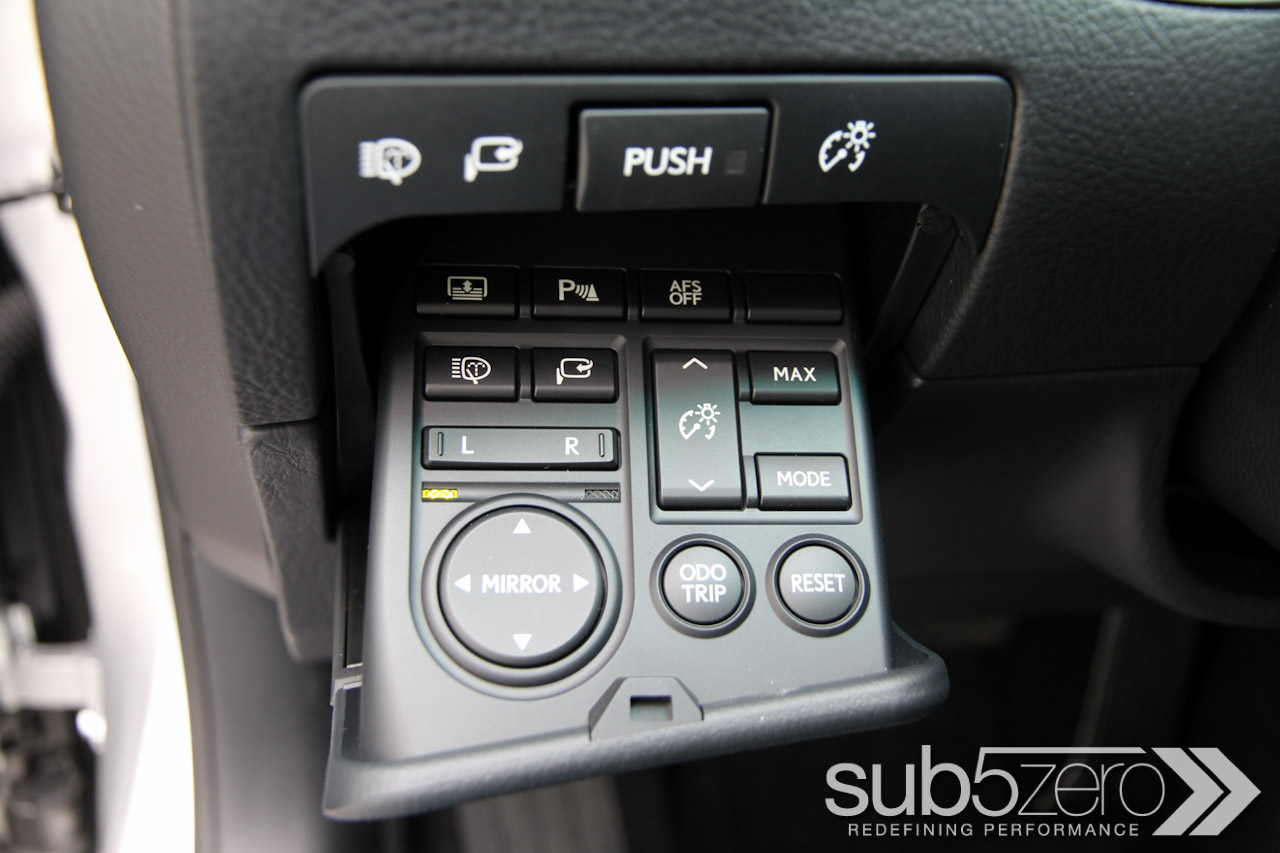 Our model sports dark wood grain covering the center stack, door handle trim, steering wheel handles and other minor trim pieces. But the remainder of the interior, much to the delight of my aesthetic sensibilities which favor minimalism, is totally blacked out. The gauges are bright and appealing and the brushed aluminum dials are a cool touch. Trunk space is surprisingly limited but still adequate. The pass-through we see on the other GS models is absent in this hybrid due to the placement of the battery pack behind the rear seats; but a tool kit and first aid kit make up for the omission (sort of…). 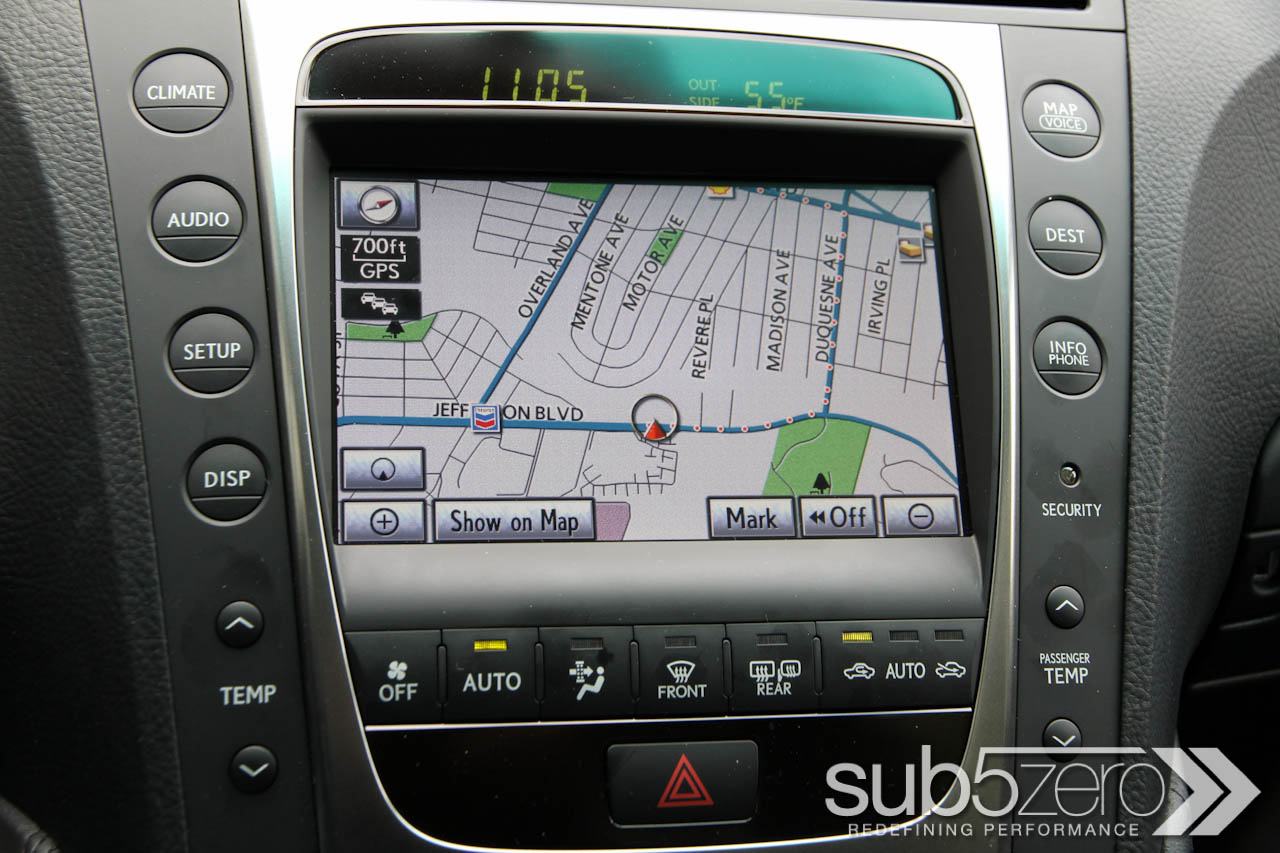 Lexus has always been a front-runner for car tech and the GS benefits from this fervor. The GS450h comes standard with heated and ventilated seats, Smart Access keyless entry and push button start/stop, one touch moon-roof with pinch protection (no more beheadings for drunken revelers), dual heated outside mirrors, automatic climate control with a smog sensor and air filter, and power tilt and telescoping steering wheel. Other niceties include the auto-on headlamps, daytime running lights, variable intermittent rain-sensing wipers, headlamp washers and a tire-pressure monitoring system.

The Lexus Premium Audio System comes with a 6-disc CD changer, Bluetooth, USB/Aux plugs and XM Satellite radio. Our model stepped things up to the Mark Levinson Surround Audio System ($1780), about which no less than 3 people asked me if it was aftermarket. The system bumps like there’s no tomorrow and creates an amazing sound stage. Our model also has the optional navigation system ($1665) which provides a backup camera, voice commands, XM NavTraffic, XM Navweather and XM Sports & Stocks. One peculiar, though not terribly important, issue is that the song information display is somehow cut off at 16 character even though there is room for tons of additional letters and numbers. 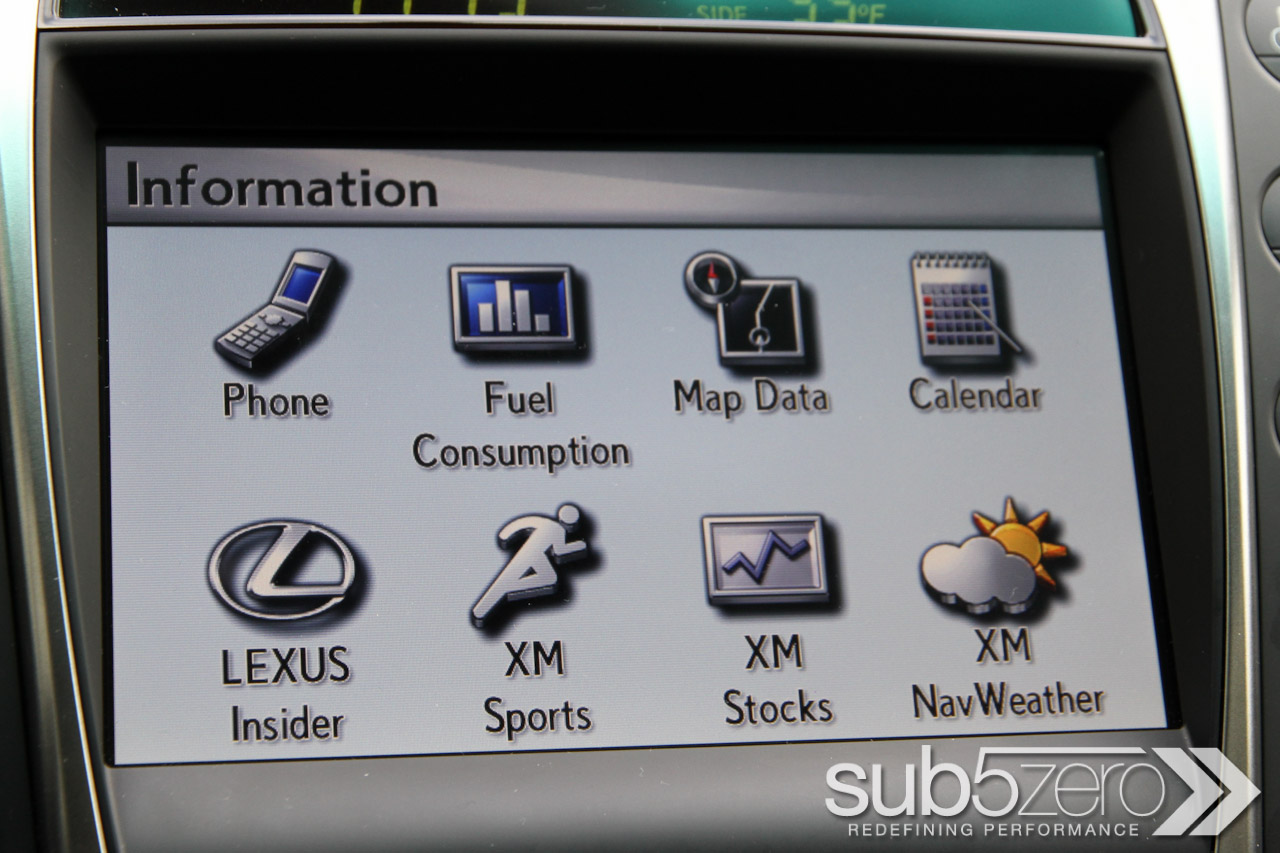 Now that you feel as though you’ve just read the pricing sheet, let's talk a bit more about ease of use. The Bluetooth phone sync is flawless and handles both pairing and connecting without hiccup. Bluetooth Audio follows suit but still only provides Play & Pause which is disappointing. A little more two-way communication to add in some album cover art and the ability to scroll songs would be greatly appreciated, although we've yet to see a manufacturer offer this feature. The parking assist alerts the driver of obstacles both front and rear and does a good job of accurately firing under normal driving conditions. The backup camera, in conjunction with the side mirrors, which automatically turn down when in reverse, allow for some overly confident rear maneuvering with the almost surreal sense of visibility provided. 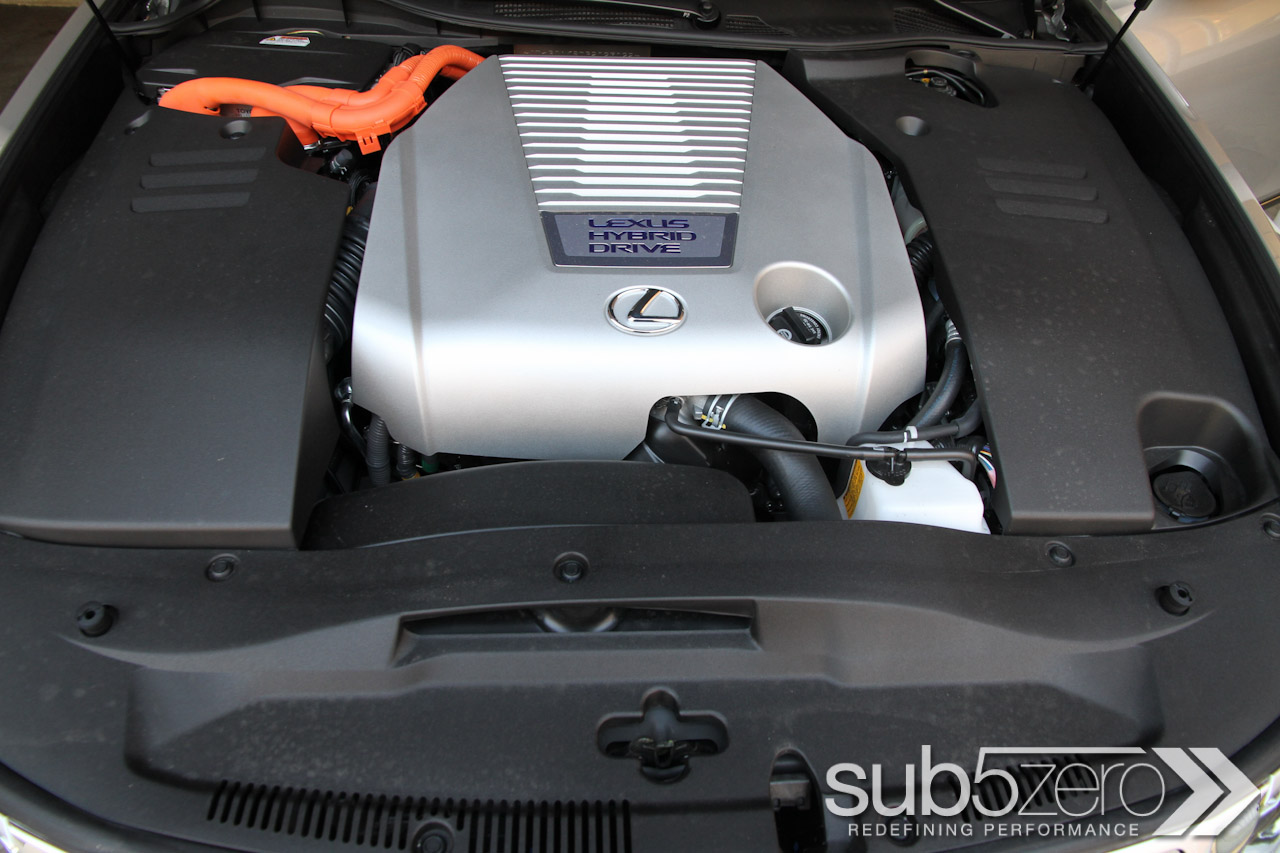 When the Lexus GS450h first dropped in 2007, it was billed as "the world's first luxury performance hybrid sedan." When you associate the words 'hybrid', 'Toyota' and 'performance' you may be hit with severe cognitive dissonance. But the GS450h is remarkably fast (and I don’t mean with some kind of heavy handicap for its hybrid status). Gunning the engine from a start causes it to pause for a millisecond and ask you a simple question "Are we doin this?." And when you drop the hammer and say "Hell yeah!" the GS450h says “Word!" and gets you on your way with an urgency you’ll not soon forget. 0-60 mph comes quickly at just 5.2 seconds. But where the GS450h really shines is at higher speeds, especially on the highway where passing and carving through traffic with an effortless agility is truly awe-inspiring.

One of the coolest and yet most inconsequential details on this car is the electrical KW gauge left of the speedometer. I'm still not exactly sure what it all means besides the obvious but I nevertheless tried to get it as close to the 250 KW limit as possible whenever possible. 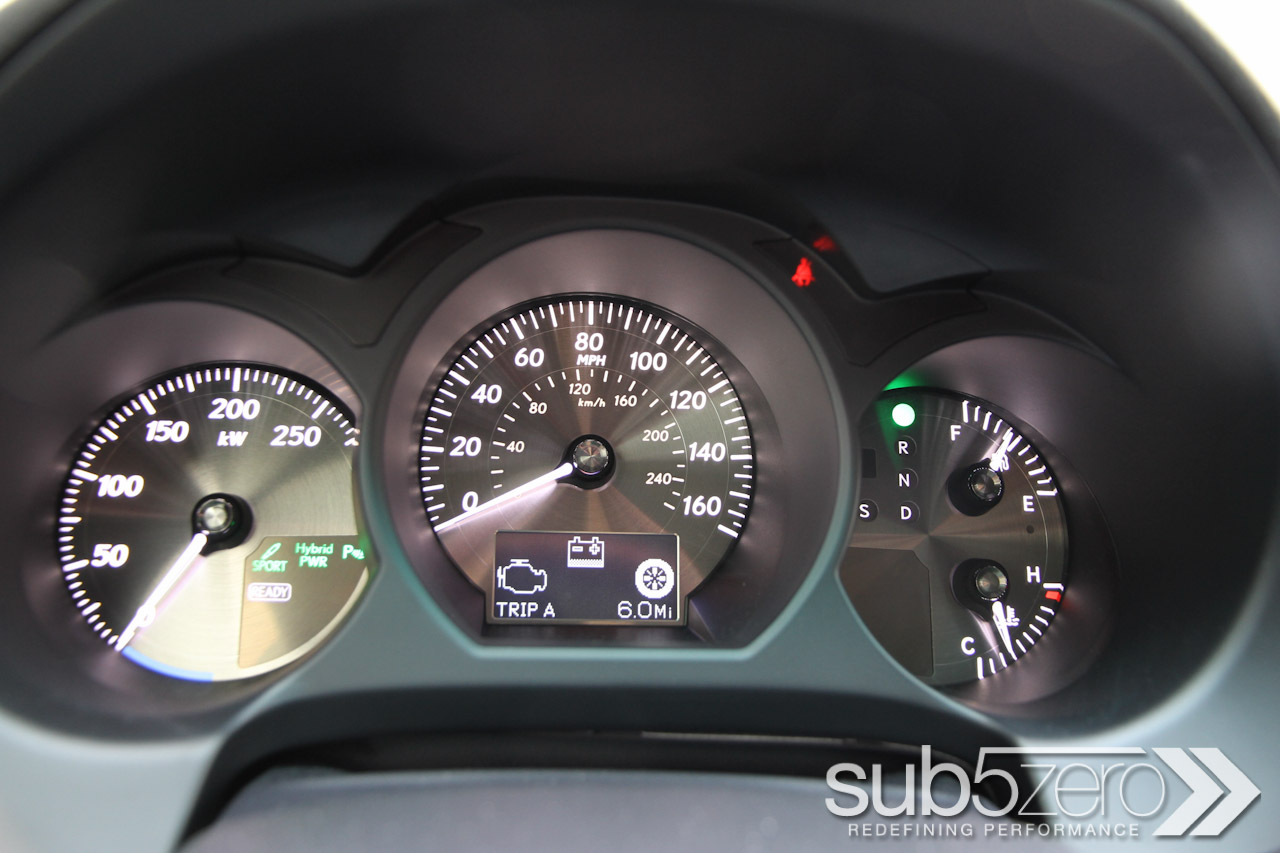 With all this talk about the juice, it's easy to forget that the GS450h is outfitted with a peppy 3.5-liter V6, a solid contender in its own right. But paired with the battery power, this setup outputs a combined 340 hp and 267 ft-lb of on-demand torque while simultaneously allowing you to whip the chunky 4,132 pound GS around as though it were a Bolshoi ballerina. 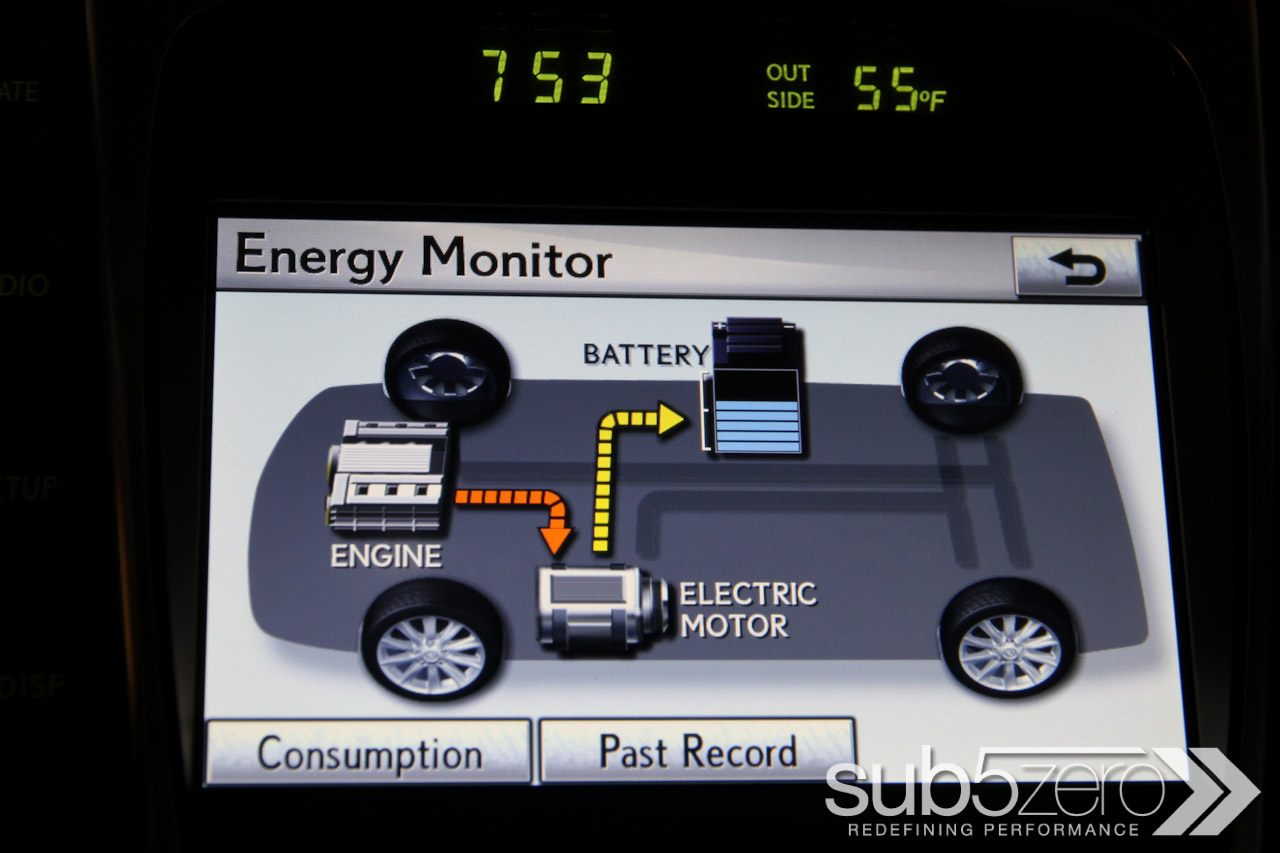 The hybrid part of the GS uses two motor-generators. They each have their own set of duties but can operate either as a motor or a generator. The first is used as a starter motor, providing no propulsion but charging the battery pack and/or boosting the power of the second motor. Part of the additional weight in the GS comes from the 288-volt DC Nickel Metal Hydride (Ni-MH) battery pack. The long and the short of it is that power from the gas engine and the second electric motor is delivered to the rear wheels using an electronically controlled Continuously Variable Transmission (ECVT). Because specific gear ratios are no longer needed, the car accelerates with no discernible gear changes. 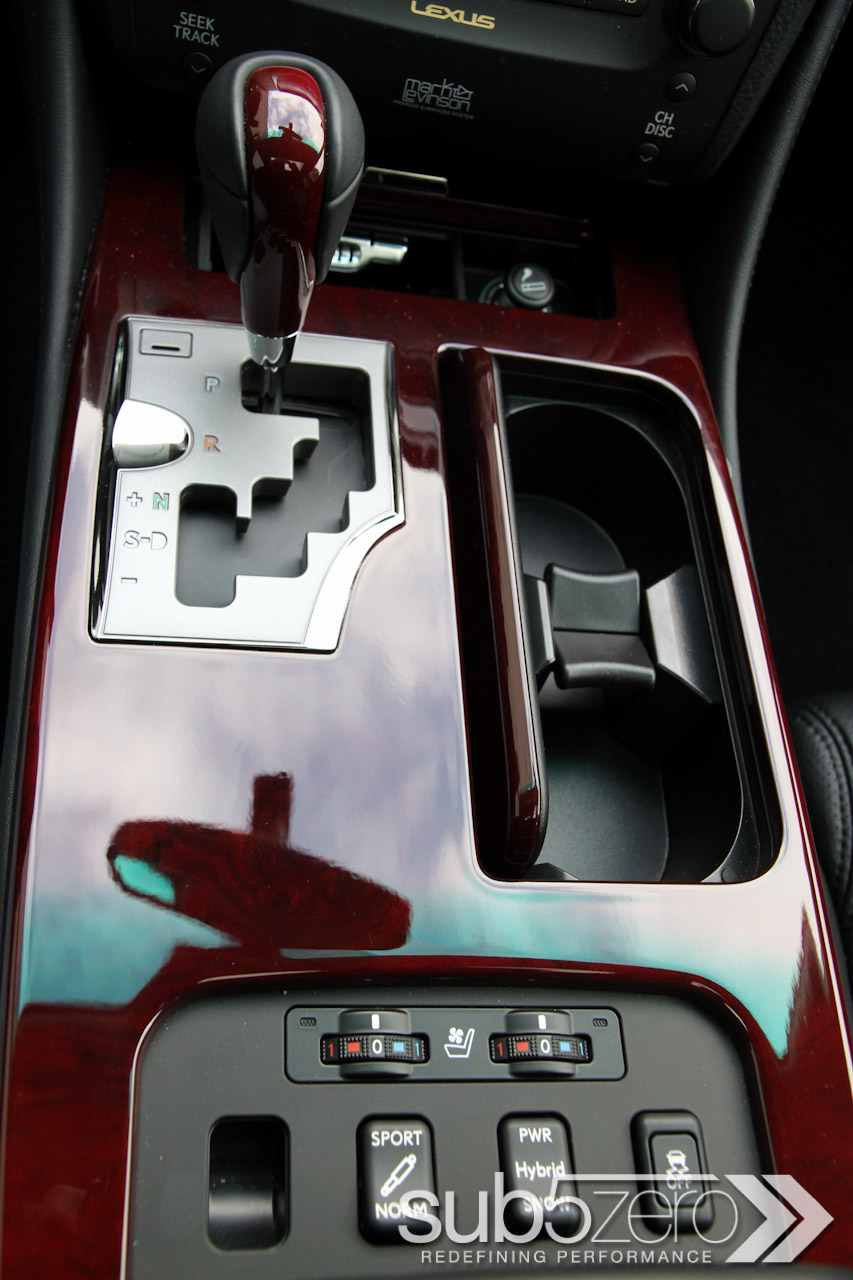 Sliding back the central armrest reveals two important control switches. One rocker switch supervises driving modes and allows you to alternate between ‘Power’, ‘Normal’ and ‘Snow’ to change the shift points and electronic controls. ‘Power’ is where you want to be as it sharpens accelerated response, unless, of course, you’re in inclement conditions where a softer response is warranted. The other switch is for adjusting the adaptive variable suspension which we found to be particularly useful as it stiffens up the ride considerably and is awesome for canyon carving. In fact, the GS stays perfectly neutral even when traversing uneven pavement. The same praise cannot be lathered on the transmission which never quite seems to find the right gear to make serious moves. After road tests with the IS350 F Sport and IS F, I yearned for paddle shifters and was met with a reversed automatic shift knob (upshifts are up instead of down). 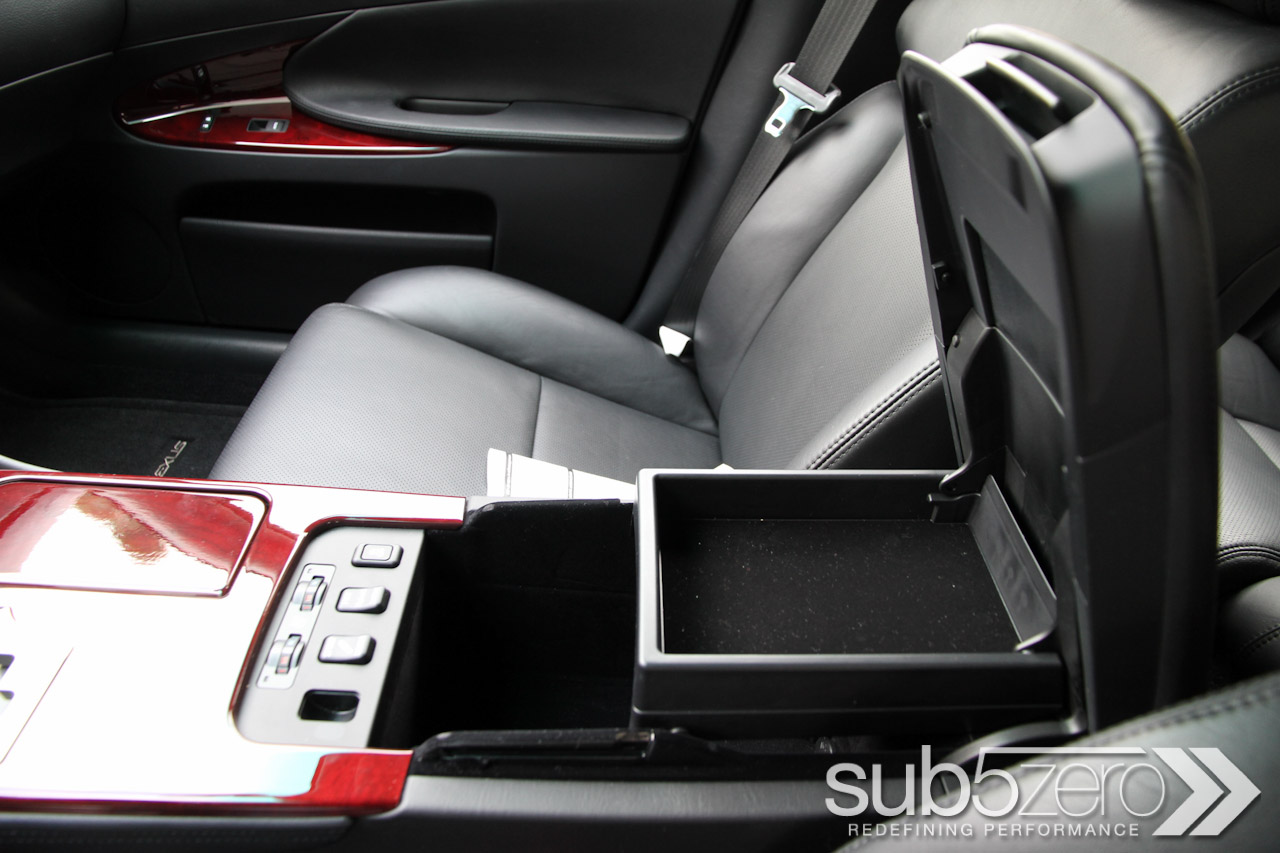 Steering is speed sensitive but seems especially hard at low velocity compared to other vehicles in its class. That said, it is responsive if not precise and there is absolutely no issue with identifying wheel placement. Traction control is set for safety first and enjoyment second and jumps in like an overprotective auntie. You almost feel like you’re wearing one of those silly child harnesses when you’re just trying to have a little fun and it's surprisingly easy to get yanked back or, in the case of the GS, have power cut, brakes applied and some flashing lights to force you back in line. Turning the DSC to the ‘off’ position allows you to experience thrills not thought possible, including getting in a little fish-tail action if done just right.

Braking in the GS450h is phenomenal– plain and simple. The feel of the pedal is sublime, neither too soft nor too hard. And, in fact, when the brakes are warm they function even sharper, engaging sooner and allowing more control, but without any sensation of abrupt grabbing.

In Case of Emergency 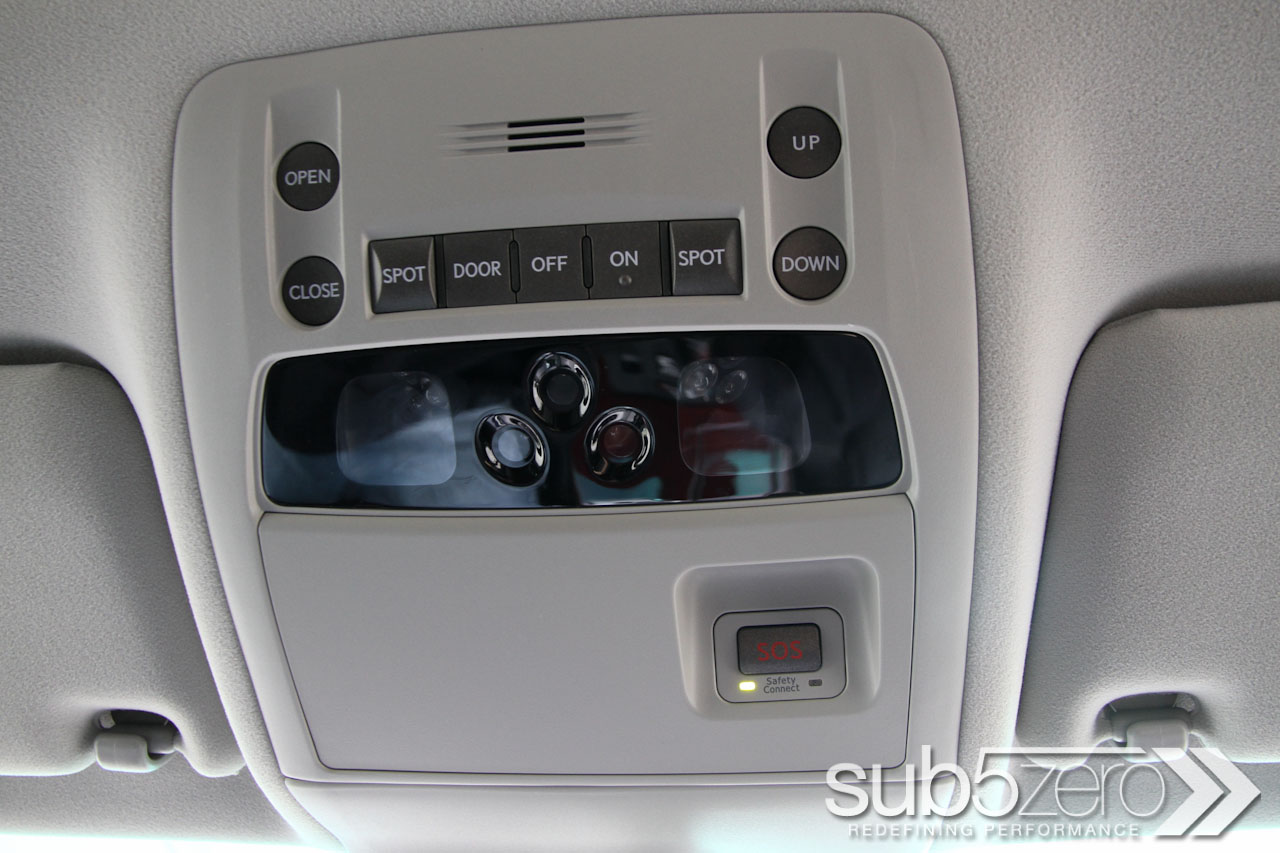 The 2011 Lexus GS450h comes with dual front airbags, front seat-mounted side impact airbags, front and rear side-curtain airbags and driver and front passenger knee airbags. It's like driving around inside a pool of balloons. Of course, the usual supplemental restraint system, pretensioners and force limiters are in full effect along with active front headrests. To keep you from having to rely on any of these, the GS450h is also outfitted with an integrated system that handles stability control, ABS, brake assist and traction control. If you really get into trouble, the Safety Connect system provides automatic collision notification to send help if requested or unresponsive. And if someone happens to jack your ride, Lexus offers stolen vehicle location. 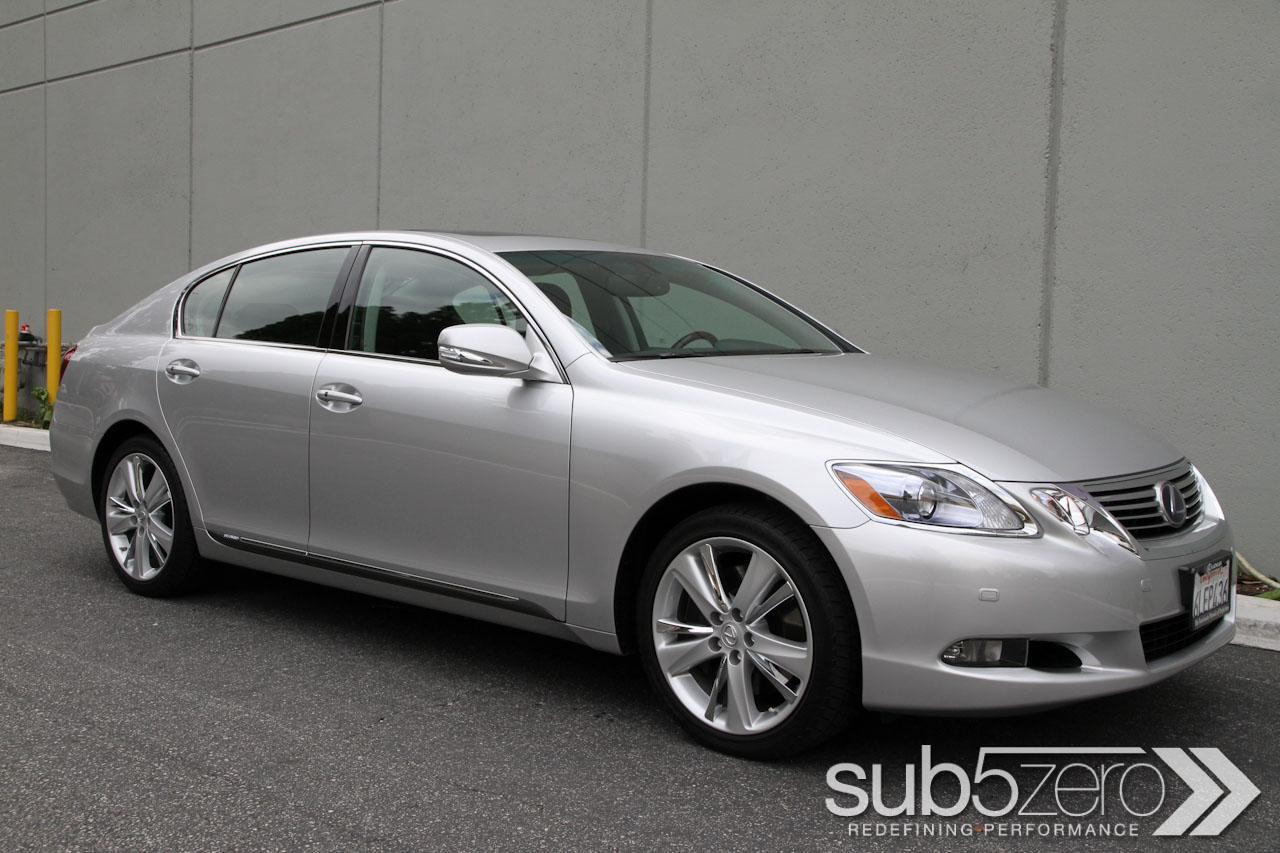 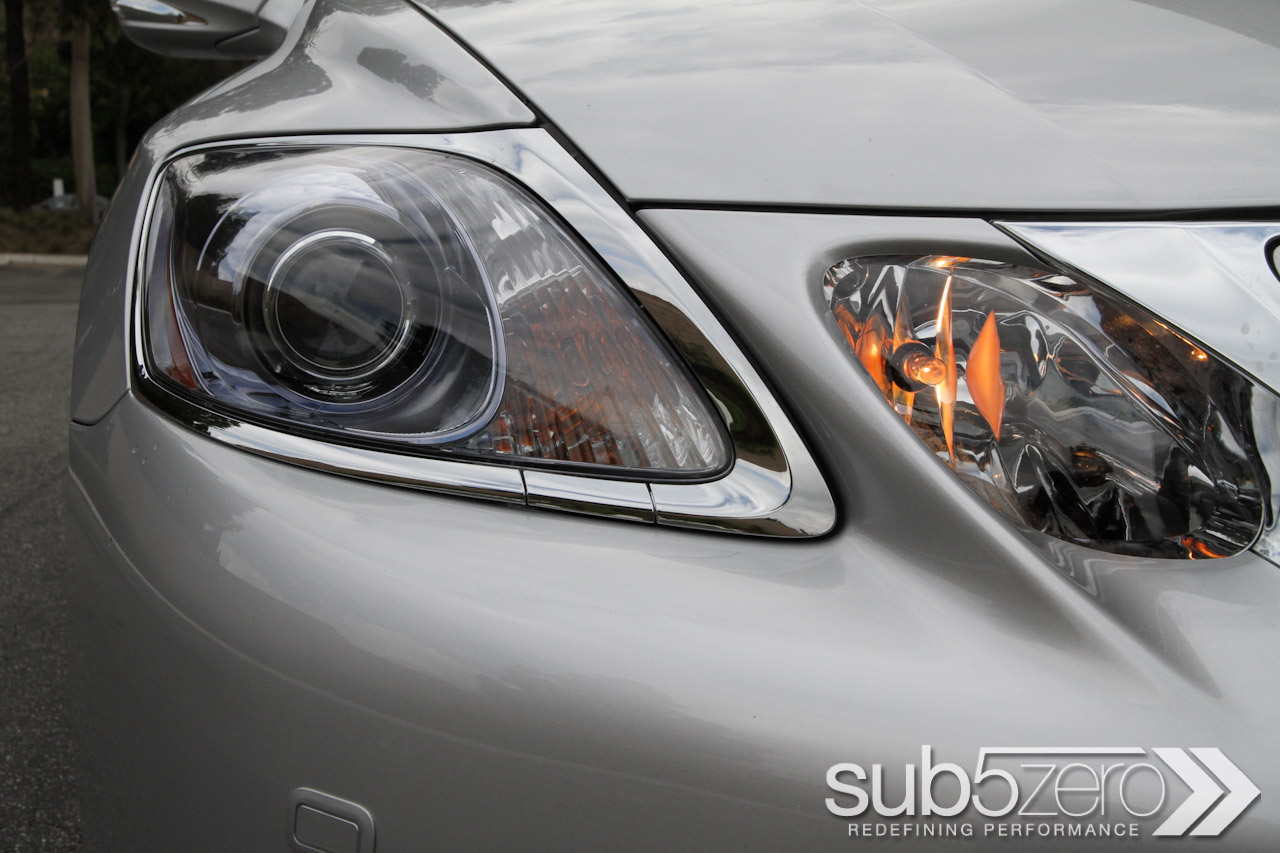 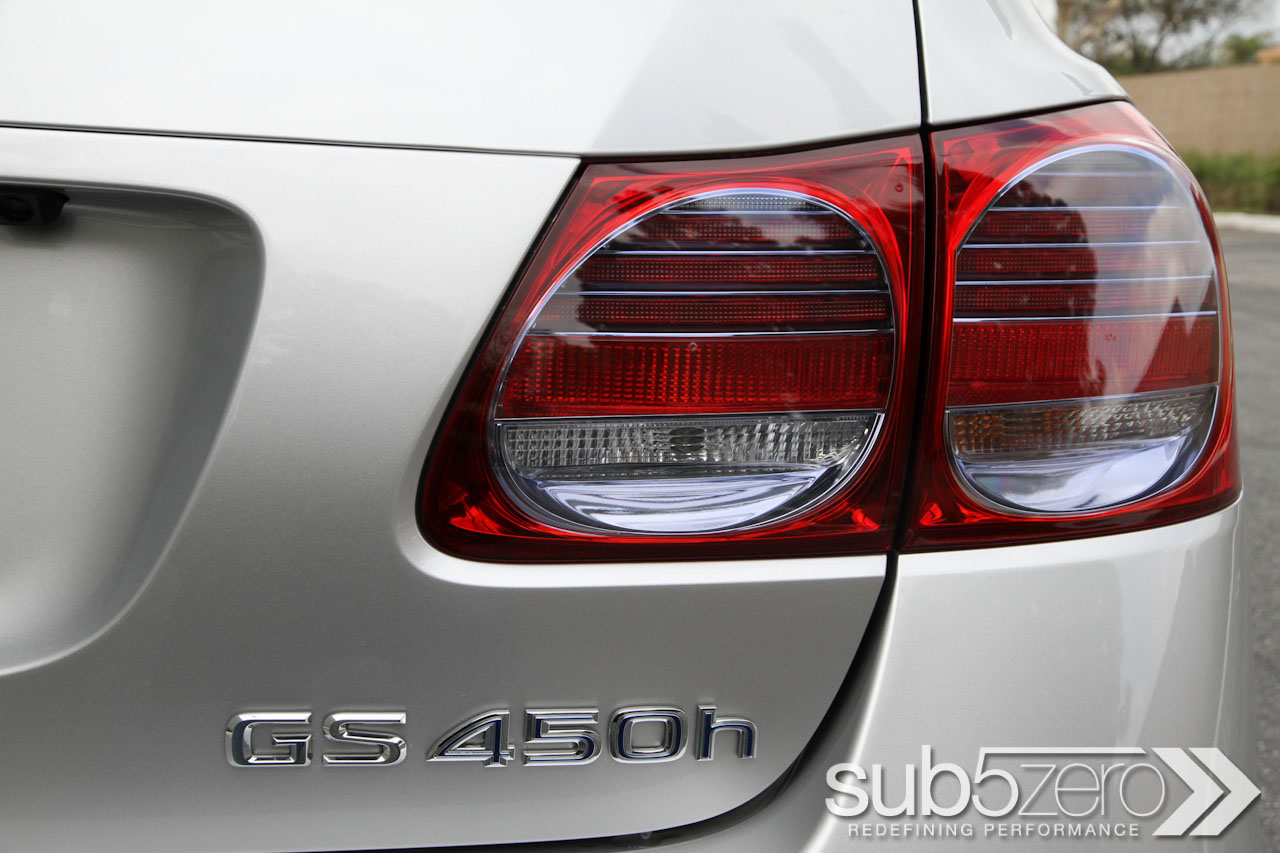 So, it comes down to personal biases and, of course, ego. The 2011 Lexus GS450h is relatively pricey but not by comparison and offers V8 performance in an eco-friendly package. You can creep out late at night without alerting your significant other (if that’s your thing….just sayin’) and later pull up alongside a Mustang on the highway, stand on the gas, and sound like a proper sports car as you zoom by.

Okay, so maybe the analogy of the cavemen and the iPad was over the top, but when it comes to the Lexus GS450h, maybe not…..