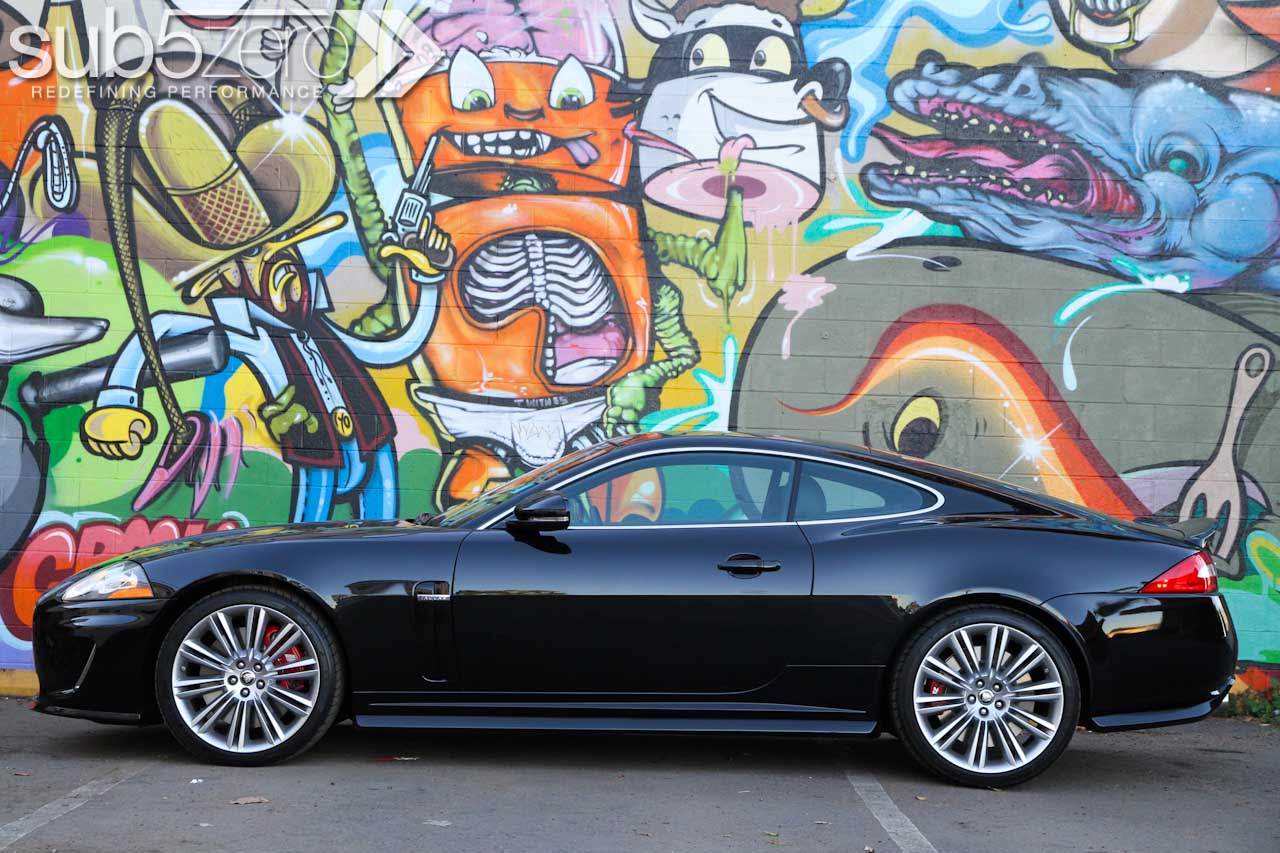 The 2010 Jaguar XKR emerged on the scene as a welcome departure from its former pedestrian persona, coupling AMG-like performance with the classic GT looks of Aston Martin. And since it was the 75th anniversary of the Jaguar name, a special limited edition model was in order. The 2011 Jaguar XKR175 is available only in North America and, as its name suggests, is being offered in just 175 examples in the US (with another 15 earmarked for the land of ice hockey and Molson's). Available in any color combination as long as it's Ultimate Black with a Warm Charcoal interior, this baby has a host of additional tweaks and add-ons that help differentiate it from its brethren. A base price of $104,500 puts this big cat right in the mix with the Mercedes-Benz SL550 and BMW M6, two worthy contenders.

First unveiled last year at the Pebble Beach Concours d'Elegance, the XKR175 fortifies Jaguar's place among the great Grand Tourers from Britain. The car didn't receive the 20 hp bump nor the suspension tuning and reworked exhaust of the continental version, the XKR 75, but it's pretty slick nevertheless. With exceptional leaps in quality and craftsmanship over the last several years, the performance gains and racing aspirations should also start coalescing with reliability and lower costs of ownership. Potential buyers will be happy to hear that for 2011 Jaguar is offering the Jaguar Platinum Coverage program which takes care of scheduled maintenance and the cost of common wear and tear items (filters, brake pads, brake discs, brake fluid, wiper blades) as well as 24/7 roadside assistance for a period of 5 years or 50,000 miles. In addition, Jaguar Cars is also offering a 5 year/ 50,000 mile limited warranty. 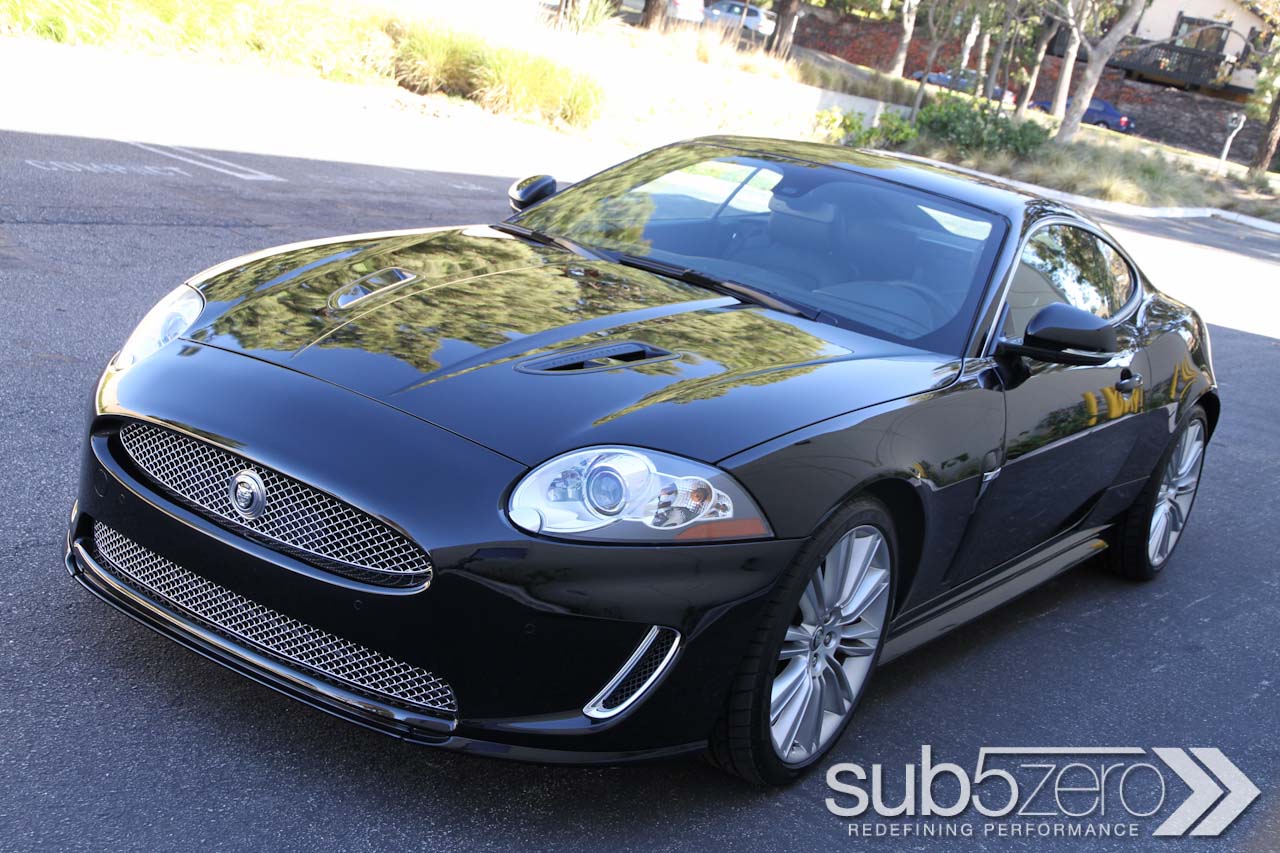 With a new Gen III 5.0-liter AJ-V8 engine sporting a Roots-type supercharger and intercooler, the updated 2011 Jaguar XKR has 510 horsepower and 461 lb-ft on tap. That’s 10 more horsepower than the Porche 911 Turbo. If there was any question as to what's under the hood, large air inlets with the words “Supercharged” sit on either side of the bonnet. A mean-looking front fascia with aluminum-finished grills, vents for and aft of the front wheels, a small rear spoiler and quad exhaust pipes further allude to its performance aspirations. The front bumper, side mirrors with LED repeaters, side power vents, rear LED tail lights and lower rear bumper spoiler were introduced in 2010, but the changes are subtle. 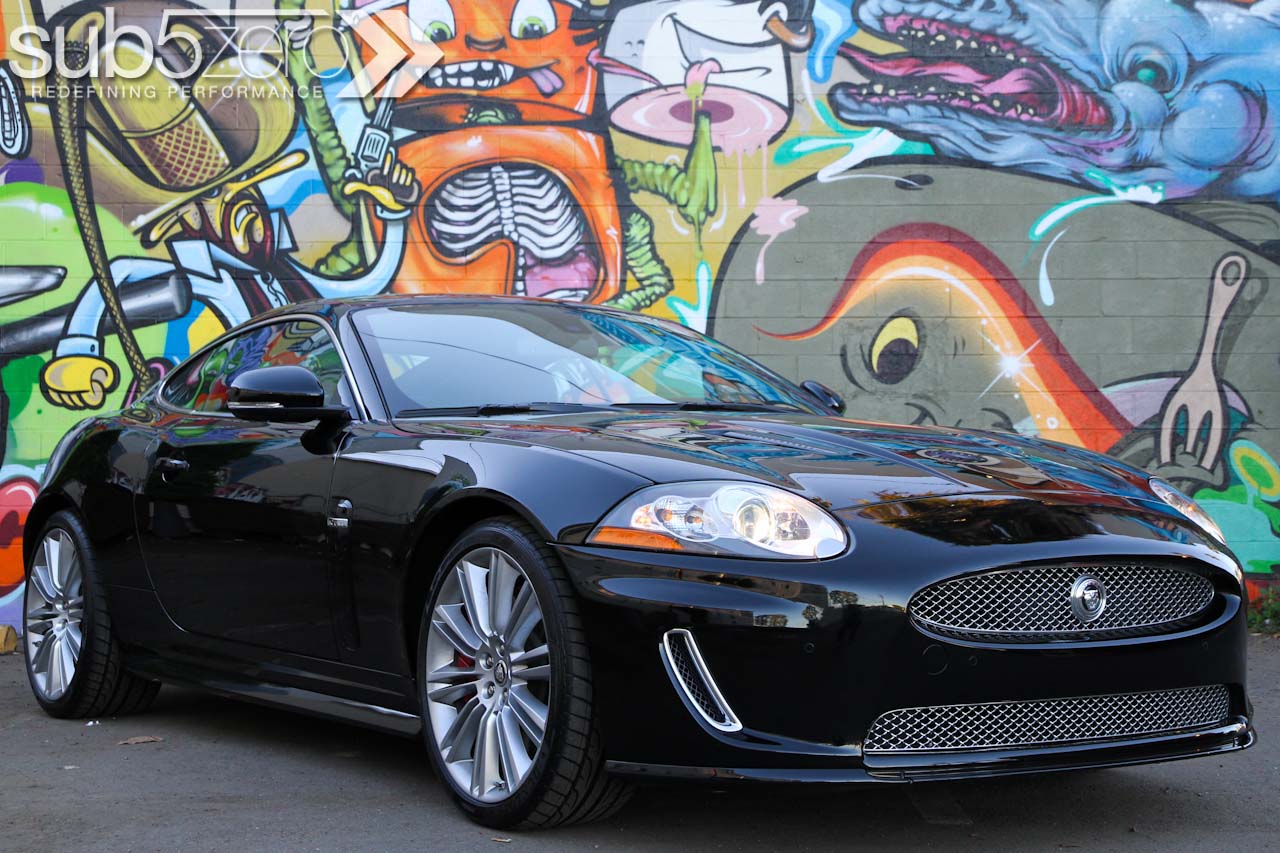 The car weighs 3,968 pounds but can sprint from 0 to 60 mph in just 4.6 seconds, which is 3/10ths faster than the outgoing model. By using direct injection, variable valve timing and a variable-geometry intake manifold, the XKR, with all its brawn and might, manages to maintain the same fuel economy while actually decreasing its carbon footprint (22 mpg on the highway, 15 mpg in the city). The XKR 175 does away with the 155 mph limit in the standard model and increases the top speed to 174 mph (why not 175 mph we have no idea). At this point, if you are feeling a bit squeamish, have no fear — new owners get complimentary driving instruction by way of the phenomenal Jaguar R Performance Academy. 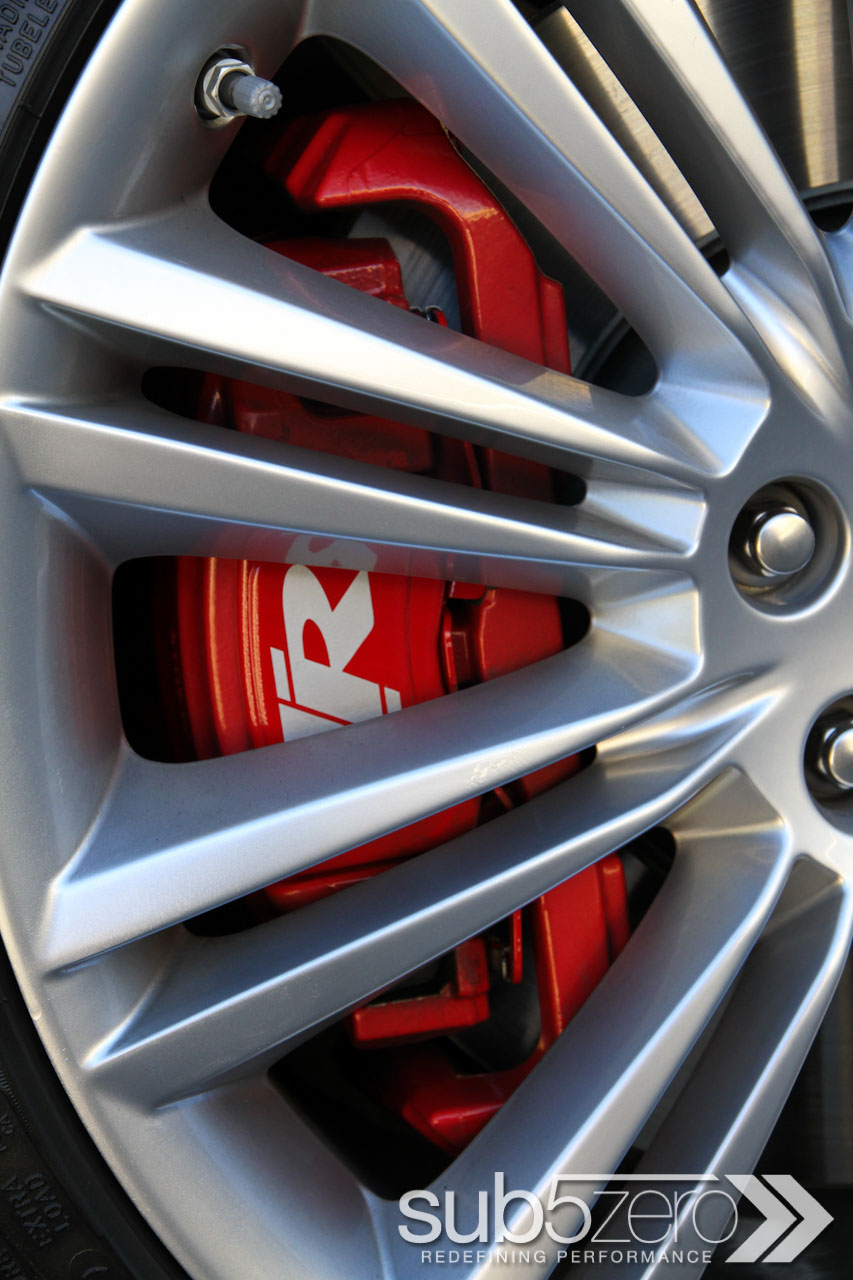 If the XKR175 resembles the swooping bonnets, low-slung roofs and wide stance of Aston Martin marquees, that's because Jaguar's design director, Ian Callum, was one of the driving factors behind the creation of the DB7, Vanquish and Vantage coupes. Even though the XKR favors these exotics in more ways than one, it is still Jaguar through and through, and not just due to the iconic badging of leaping cat emblems. The signature Jaguar accents, contouring and design aesthetics still make strong appearances. The XKR 175 benefits from a larger rear spoiler, body colored rear diffuser and side sill extensions that give it even more edge. The brake calipers are finished in bright red which is definitely a nice touch and provide a cool contrast to the midnight black paint on the rest of the car and the silver finish of the large 10-spoke 20 inch Kasuga alloy wheels (as opposed to the standard 19-inch Tamana wheels). 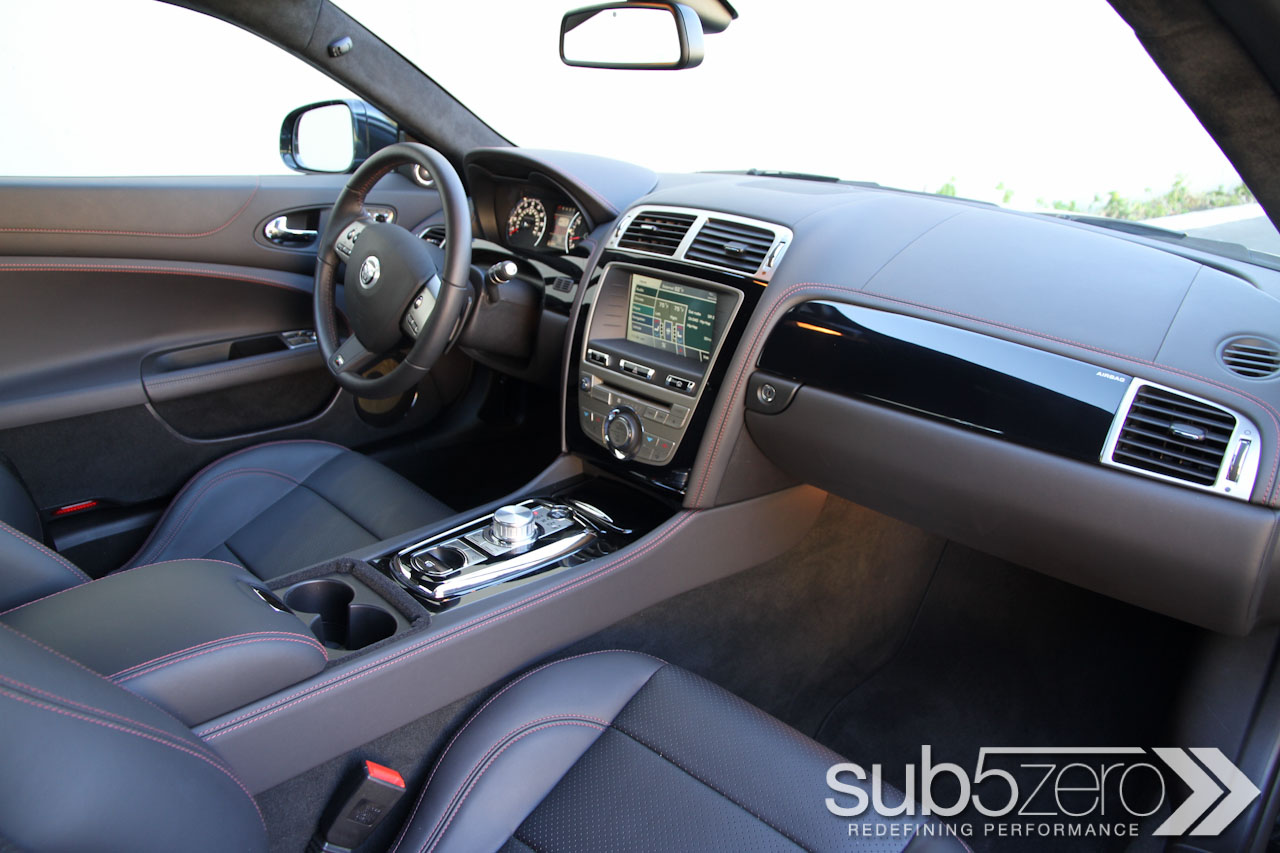 Inside, luxurious fit and finish abound with the XKR 175 featuring Warm Charcoal softgrain leather offset with Cranberry stitching, Jet headliner and Piano Black veneer finishing off the trim and accents. The only real branding is found the door sill tread plates that identify the car as ‘1 of 175’ (of these limited edition Jaguars). It's a nice touch but would have been more effective if it actually showed the specific serial number of the vehicle instead of the generic stamp all cars in the production run received. 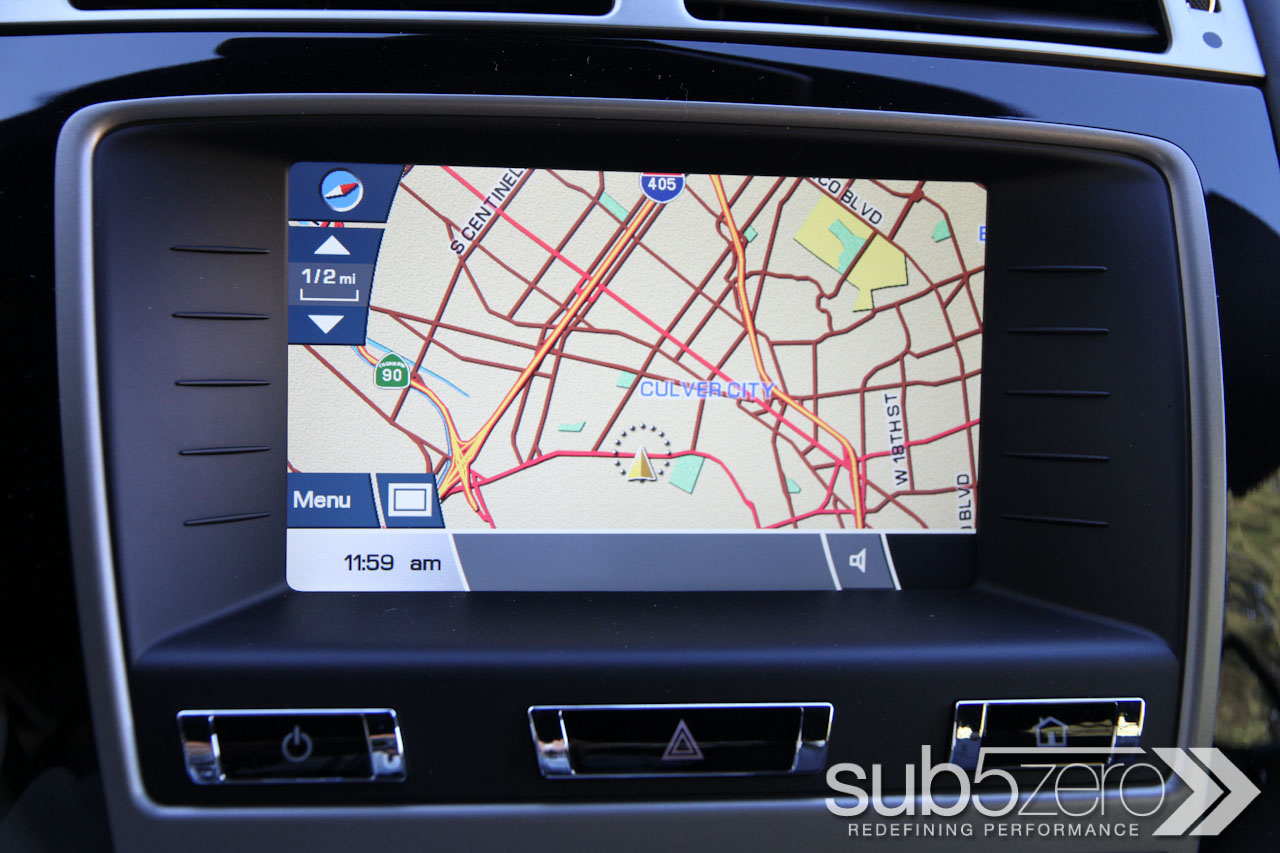 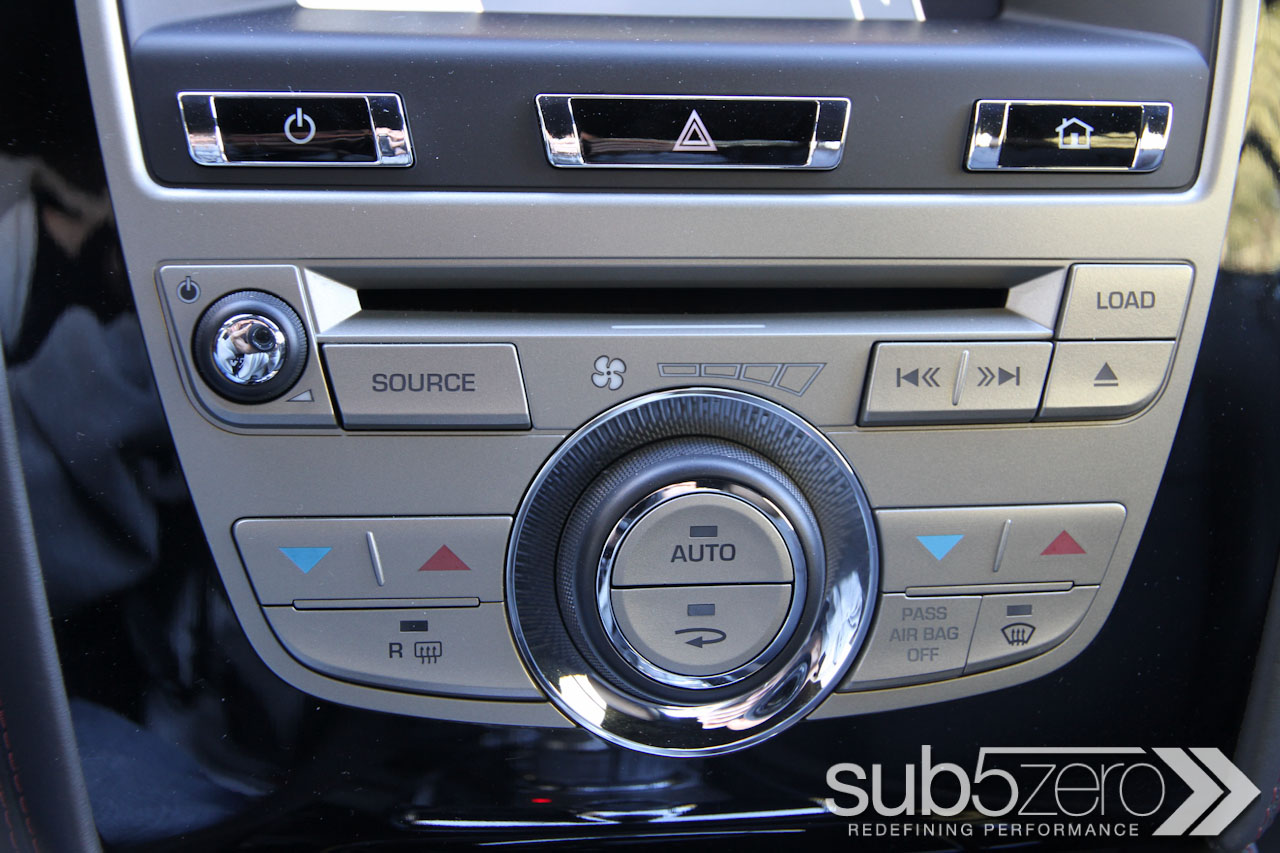 Overall, the interior is beautiful. The only real knock is that the area surrounding the infotainment section and the steering wheel-mounted controls are covered with silver painted plastic which looks cheap and out of place in this otherwise luxurious decor. The interior is surprisingly simple and user-friendly. The touch screen-based multimedia system controls the audio system, climate control and satellite navigation which covers 90% of the necessities. The system is chock full o’ features and functionality but is surprisingly easy to use. However, the interface is a little dated and could use some life, and the response time was not as immediate as one might like. In addition, by placing so many virtual functions in this system, Jaguar maintains a spartan and clear cabin, but the downside is that the process of interacting with it can be a bit laborious at times, and drivers would probably be better served with a few more physical knobs and buttons. 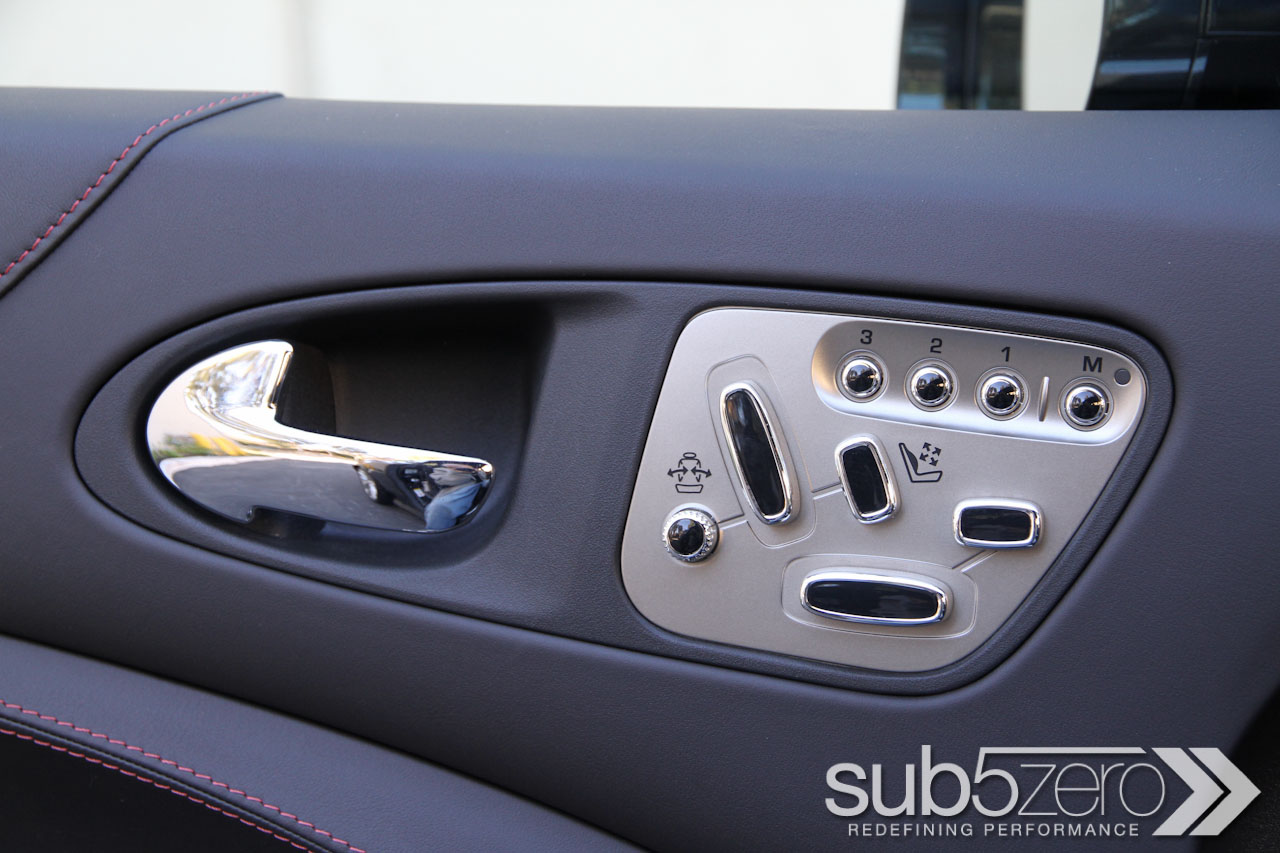 The seat controls are just about the coolest I've come across. Not only are the usual suspects of lumbar control and the ability to move forward and back in effect but the bolster support tucks you in nice and tight. Couple that with the three heat settings and one cooling and three memory functions, and you've got the perfect set-up. The heated steering wheel is just icing on the cake. 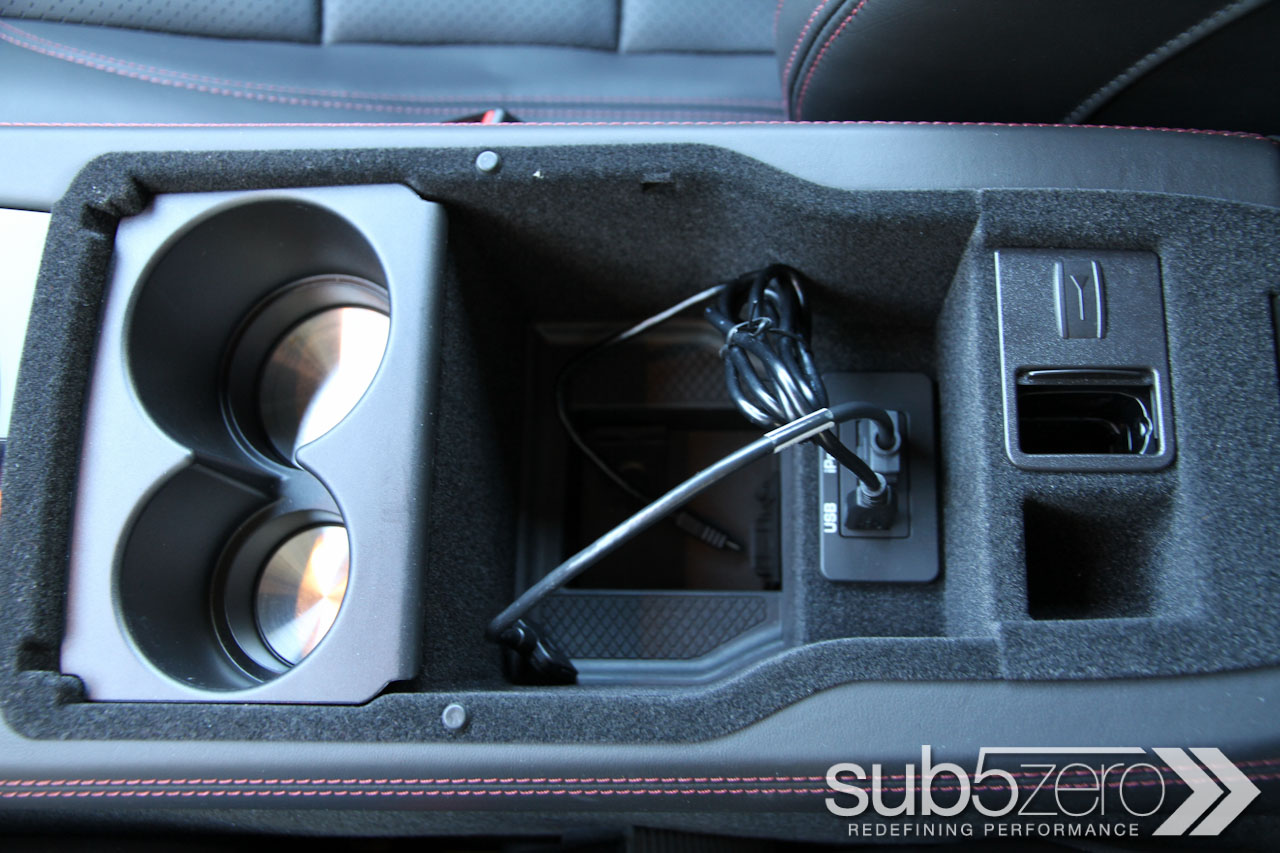 The 2011 Jaguar XKR also sports all of the electronic wizardry one would expect at this price point including a tire pressure monitoring system, keyless entry/start, portable audio connectivity for iPod and USB devices, adaptive cruise control and an anti-theft engine immobilizer. 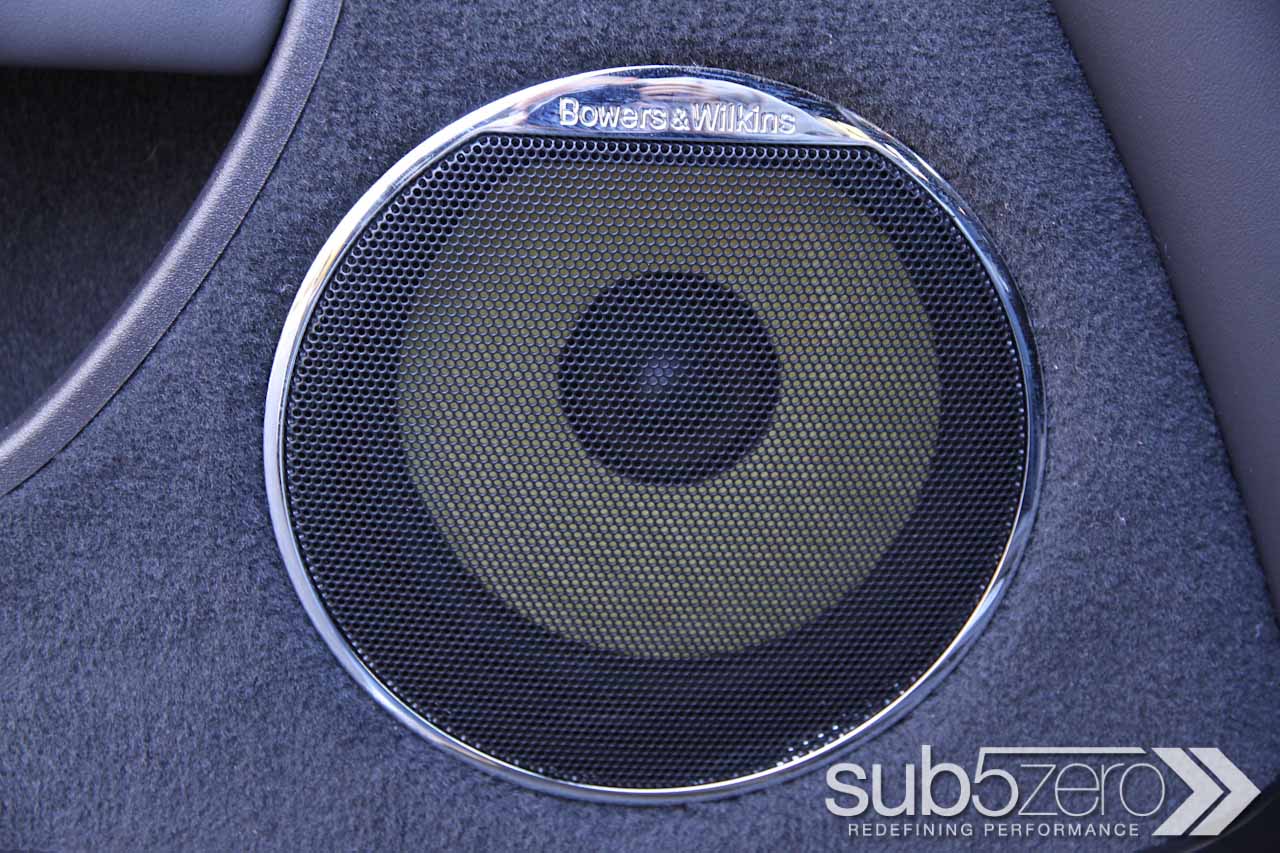 And let me finish this with a topic near and dear to my heart – auto fidelity. The Jaguar XKR has one of the finest sound systems I've come across, after being thoroughly disappointed by plenty of high-end, high wattage systems that just failed to wow. The Bowers & Wilkens components are so well-designed and the acoustic mapped so efficiently that even with the top down the clarity and delivery is stellar. The system offers 525W of Dolby Pro-Logic II 7.1 surround sound with 14 speakers delivering tunes from AM/FM radio, SIRIUS™ Satellite Radio, 6- disc in-dash CD changer or connectivity to an external MP3 player. However, strict technophiles might object to the absense of Bluetooth Audio and a rear-view camera.

Phenomenal–plain and simple. The entire driving experience is truly enhanced and accentuated every step of the way. The start/stop button pulsates like a neon sign in the red light district. Once you've given in to temptation, pressed your foot on the brake and depressed the starter, the engine roars to life, elevating the rpms much more than probably necessary, but the point is well made – this car is begging to be pushed hard. In fact, the gear shift control, the JaguarDrive Selector™, actually rises up from its flush mount in the center console letting you know that it’s time to get down. Turning the circumference of the dial clockwise takes you from Park through Reverse, Neutral and Drive. At the end of the twist, there is a little resistance, but by pushing down and clicking the knob all the way to the right, the car enters Sport mode, pretty much the only place you want to be once you discover its existence. 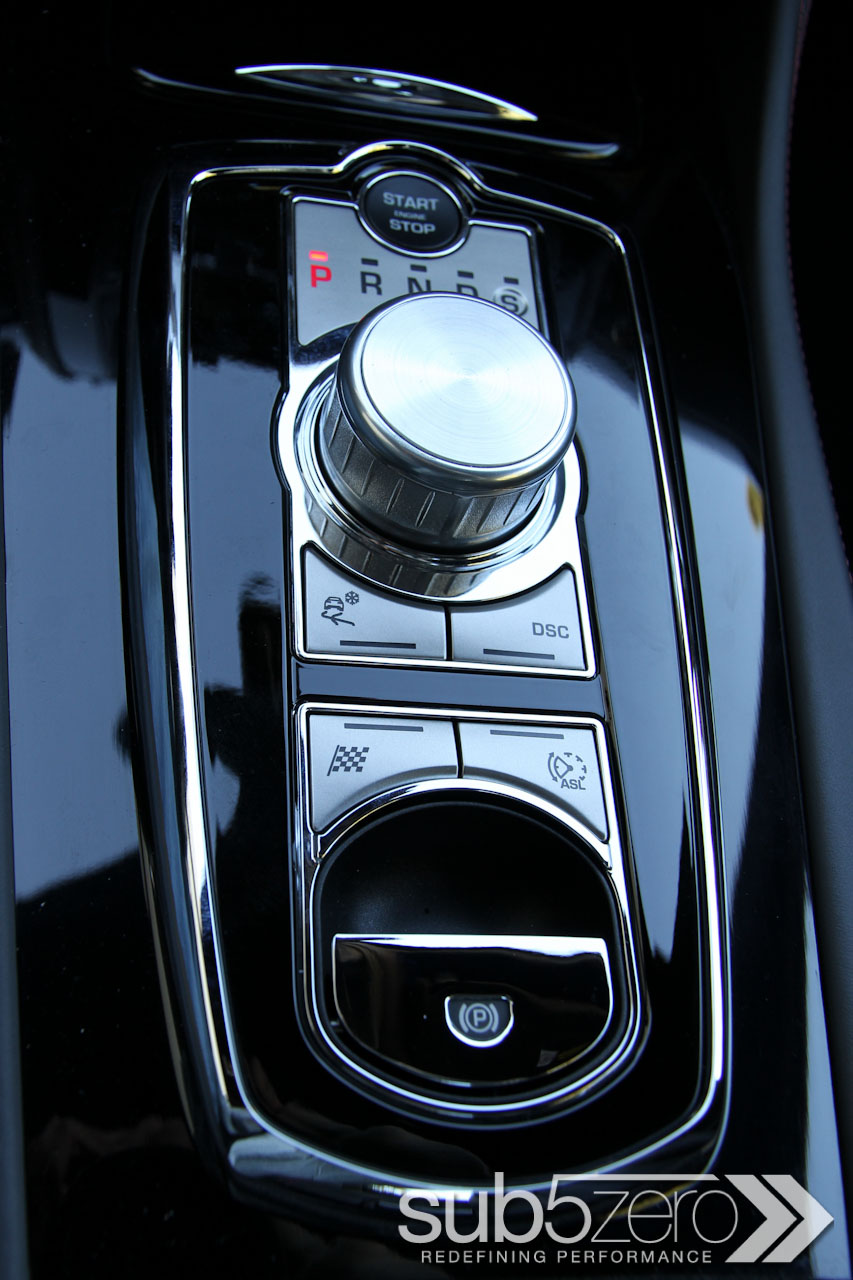 The 2011 Jaguar XKR175 uses a ZF 6-speed automatic transmission, but don't be put off just yet by the slushbox. Steering wheel-mounted paddle shifters let you take control at the first pull. If you get lazy and the car senses you are no longer actively managing the gearbox or you hold in either paddle for three seconds, auto mode kicks back in. At this point life's good — you've got your regular drive mode for cruising around town and sitting in traffic and a more aggressive gearing for Sport mode when you've got a little room and you want to have some fun.

With 500+ horsepower on tap, either driving mode is more than sufficient. But Jaguar has a little trick up its sleeve. Just below and to the left of the dial are two hot zones. The one on the left is Dynamic Mode and the other is Dynamic Stability Control. By activating the former and selecting options from the later, the XKR turns into a different beast altogether. Dynamic mode tweaks the engine management for a much more responsive throttle, quicker shift times and improved body control. Dynamic Stability Control provides selectable modes including Normal, Winter, Trac DSC and DSC OFF for those brave souls. 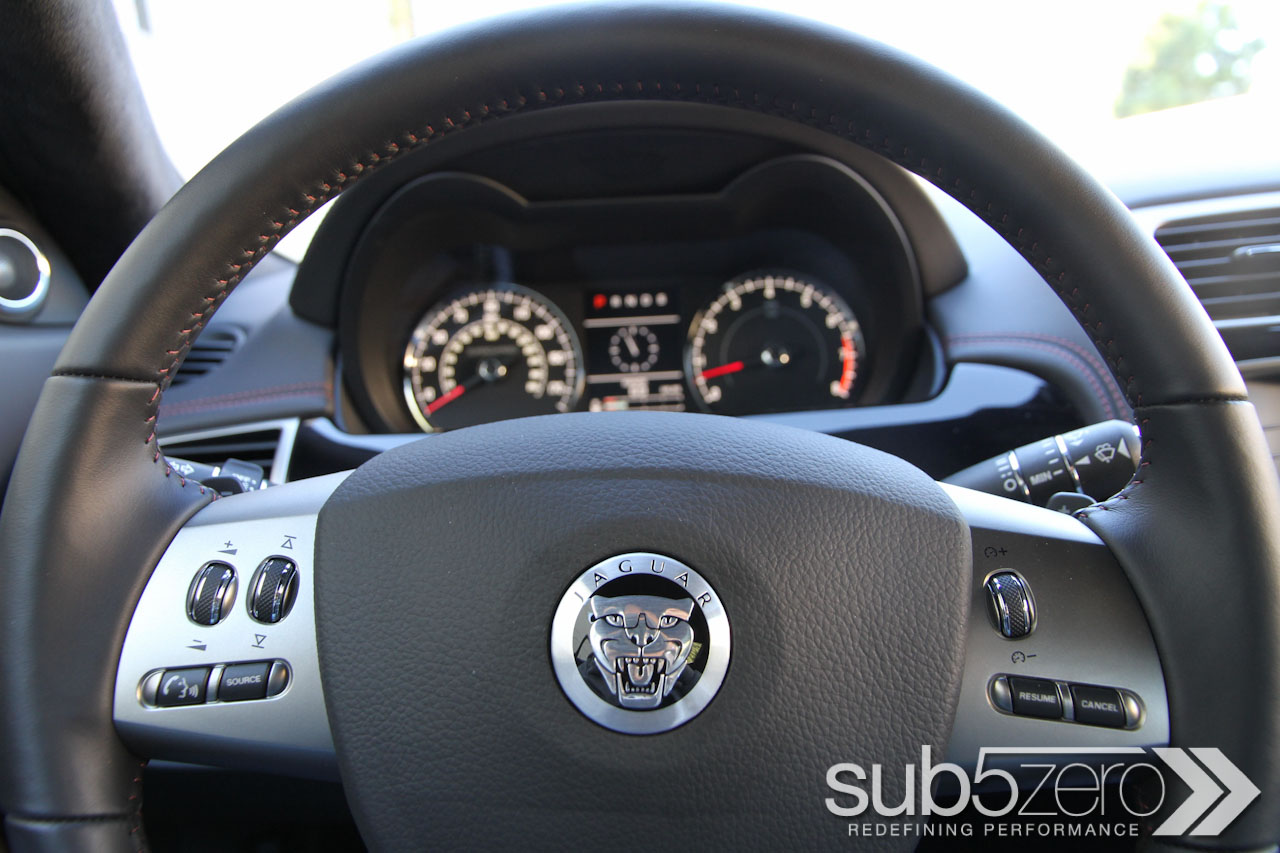 The Jaguar XKR175 pulls hard in every gear and the transmission is pretty much flawless. The rev-sync makes downshifts almost imperceptible except into first, which can be somewhat jarring (but who does that anyway?). But the car seems to be totally okay rolling from 2nd and, even at a complete stop, will hold this gear if in manual mode, an anomaly in today's sport-shift world (which, when the revs drop too low, will automatically serve up 1st).

Handling is superb as the all-aluminum frame is stiff and stable. Jaguar's aptly named Computer Active Technology Suspension (CATS) is replaced with a new Adaptive Dynamic system which is a much more sophisticated system offering active damper tuning on the fly, taking hundreds of readings a second to control body vertical movement, roll rate and pitch rate. Coupled with the Active Differential Control (ADC) system, basically a limited-slip differential controlled via an electric motor capable of providing fully automated adjustment to vary its locking torque, the car is extremely precise. In fact, steering shows not a hint of tramlining. 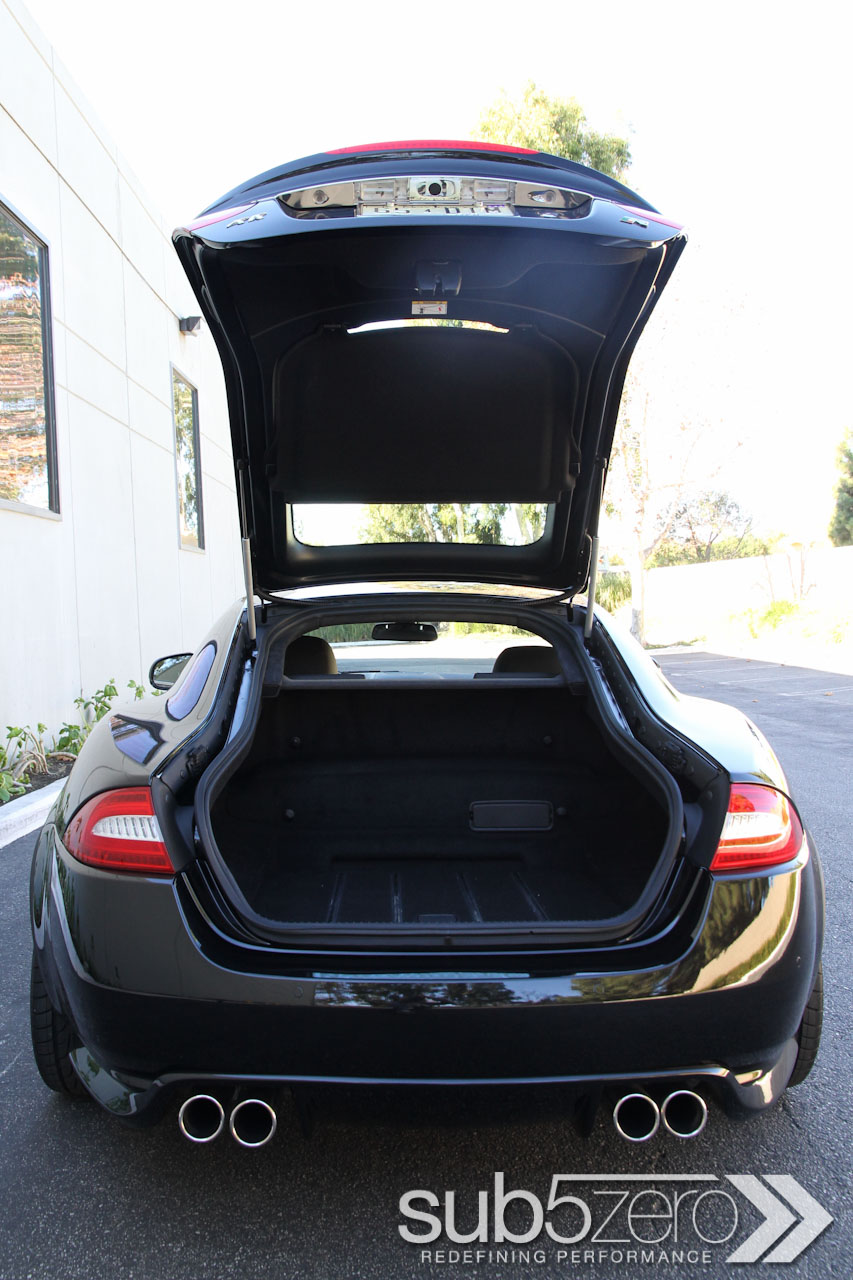 The back seats are pretty much useless for anything but a bag of groceries. However, the Coupe has a tad more storage space than the Convertible, with 11 cubic feet of space as opposed to just 8, and there is enough cargo area for two people to make a weekend getaway if nothing more. You may be super comfortable on a road trip but get the in-laws to stow your luggage in their mini-van if you plan on long-hauling it. The good news is that the XKR has way more space than the Mercedes-Benz SL or Porsche 911 and just a tad less than the BMW M6. 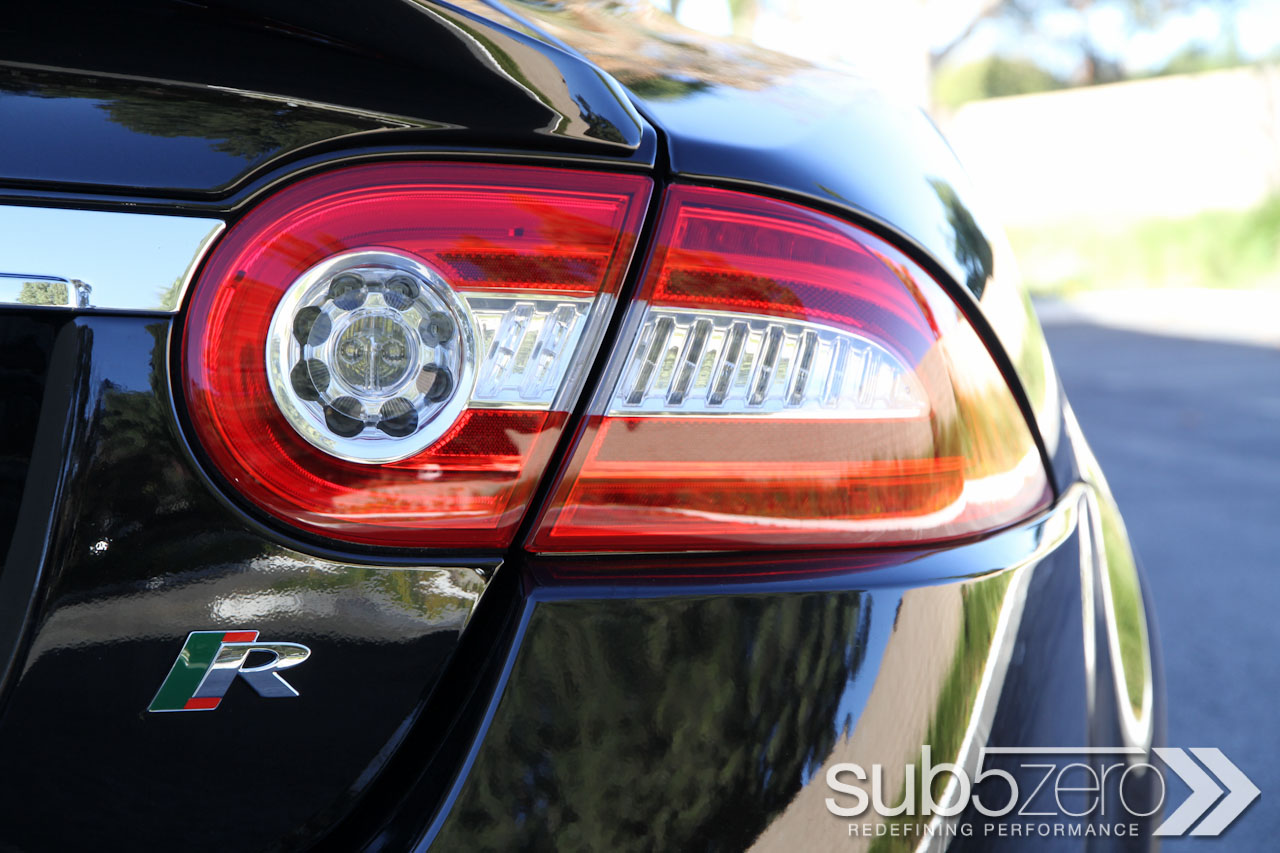 The 2011 Jaguar XKR175 is guilty of being a monster of a performance vehicle, a stunning looker and a refined brute that's just as comfortable thrashing around on the track as cruising Rodeo Drive. The $8,500 premium of the 2011 Jaguar XKR175 over the base model offers the distinction of a limited edition piece of history. Sure, cranberry stitching, stamped door sills, some bigger wheels, painted calipers and some new aerodynamic body pieces may not be worth it to everyone but for some discerning owners, it may be enough to pull the trigger. While the 174 mph top speed is a nice ego boost, we just wish that Jaguar had increased engine displacement a bit and tossed in a new throatier exhaust system (like the international version). In any event, the 2011 Jaguar XKR175 Limited Edition Coupe is a true rock star and, when you’re at the helm, you can’t help but feel like one.