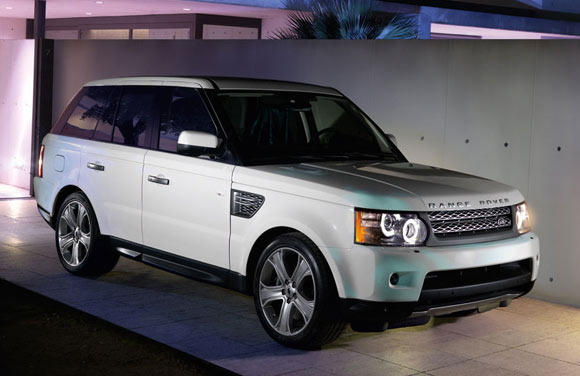 What if you were able to zip to Whole Foods for that forgotten spice, or drop the kids off for Karate practice, or meet your BFF half way across town for a latte– from the comfort of your living room? And what if you could still be as agile as Dwayne Wade (pre-injury)? Surely I jest, but the 2010 Range Rover Sport Supercharged provides about as much comfort, luxury and convenience as one could ever need in a package that still allows for plenty o’ driving thrills. Land Rover revised its entire lineup for 2010 and the Range Rover Sport emerged as the destined-for-greatness offspring of the big-daddy Range Rover and the petite LR4.

While the 5.0-liter engine is sprinkled across all models along with an updated electrical architecture, the RR Sport gets its predictive adaptive suspension damping, monster brakes and optional 510 hp supercharged V8 from the elder statesman. Most of its underpinnings, including the body-on-frame platform and use of control arms in front and rear (as opposed to the Range Rover setup with struts fore and a multilink system aft), are shared with the LR4. 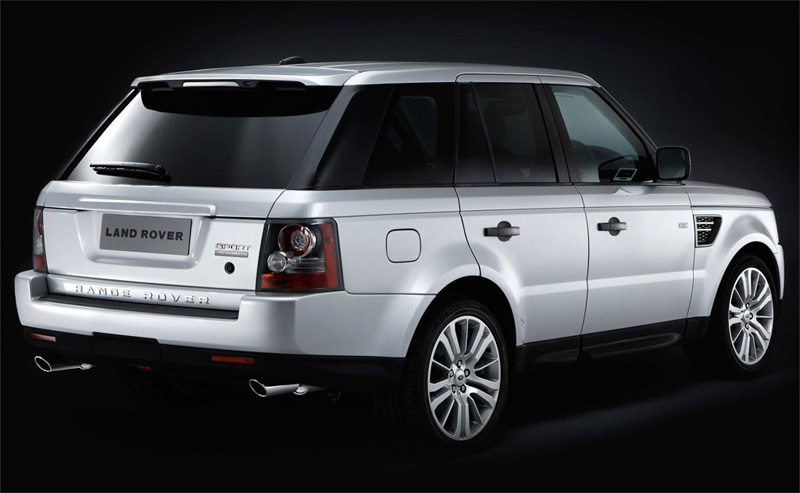 The Range Rover Sport’s clean and sleek look, low slung roofline and muscular stance were already stunners before a host of minor tweaks were applied for 2010. Updates include LED-encrusted headlights and tail lights, recontoured front fenders as well as redesigned bumper and wheel arches. The two-bar grill and side sills give it the perfect hint of aggressiveness. This body style has been around for a few years now but is aging gracefully and Land Rover’s host of small but important changes are keeping it relevant. 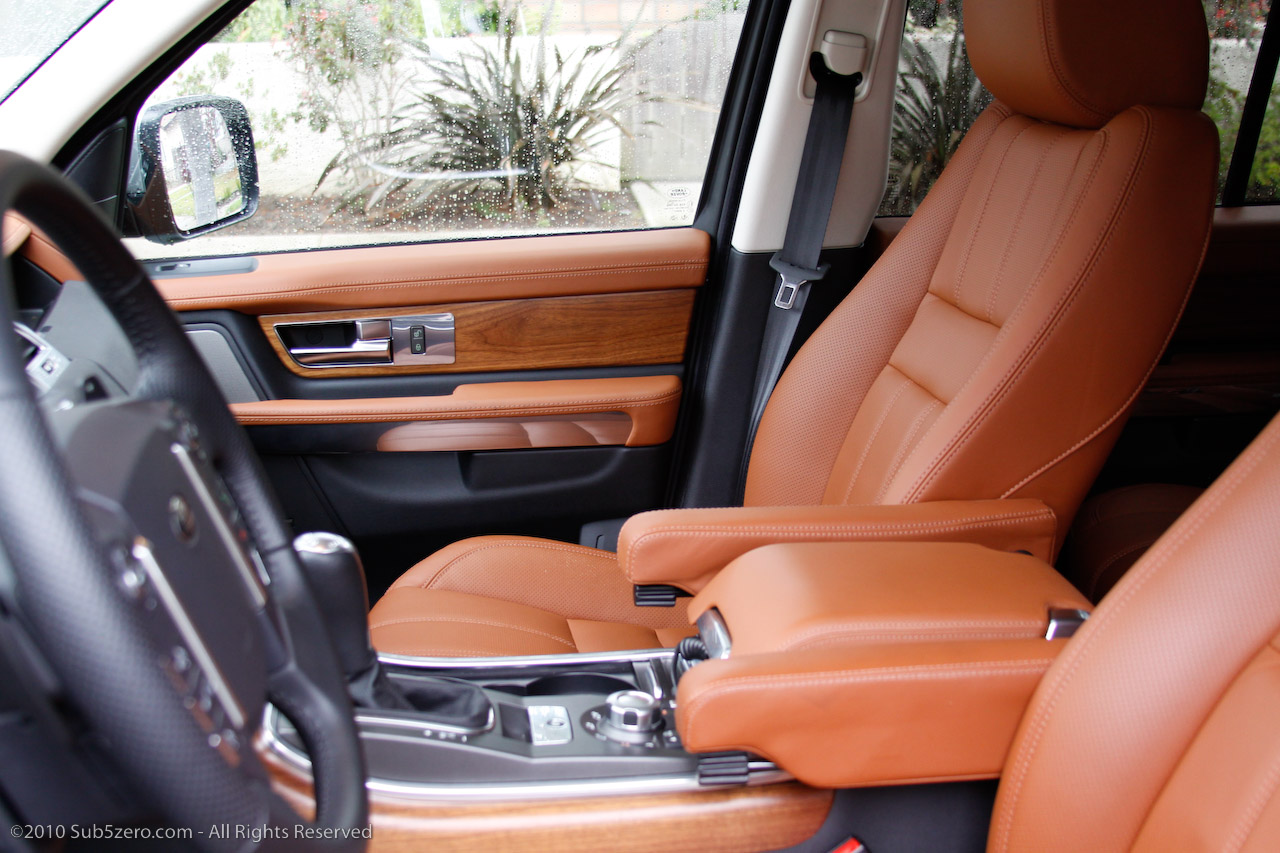 Most likely nobody will stop and stare as you drive by in the Range Rover Sport, but if invited inside they will definitely gawk for awhile and may not leave on their own volition. That wasn’t always the case, but this go-round Land Rover has made a strong case for their atmospheric prices. The cabin of the Range Rover Sport is outstanding, with soft-leather, wood trim and high-end plastics throughout. Our model came with the optional Extended Leather Pack which lathers additional cowhide on the upper dash, armrests and above the door panels. This is a $1,000 upgrade but well worth it for the feel of opulence it creates. The seats are extremely comfortable and allow the driver to adjust the side-bolsters for a snug fit, which comes in handy with high-speed cornering.

The infotainment system is fairly intuitive and easy to use, with only a small learning curve. Even though almost everything except for climate control can be handled via the 7-inch touch-screen, having additional buttons for Nav, Audio etc. on the center stack leads to some initial confusion as to when to use what. But this is easily overcome by some good ‘ole trial and error. The only real concern is the lag time and accuracy of the touch zones on the screen. Latency is a bit of an issue but not so much that you want to put your fist through the dash. The 450-watt 14 speaker Harmon/Kardon Logic 7 surround sound system is well-balanced, has enough juice to keep your posse nodding and more than sufficient volume even with all the windows rolled down (my tried and true litmus test for audio-performance– an oxymoron I know).

Unfortunately, the same praise cannot be heaped on the optional rear-seat entertainment system ($2,500). The large LCD screen embedded into the back of the front-seat head-rests and the nifty remote with more buttons than my TIVO had me giddy with excitement. But after several attempts to load a DVD into the slot in the dash and being told the disc was invalid, I realized my assumption that the 6-disc in-dash changer could handle both CDs and DVDs was flawed. And the usual suspects like the glove-box and center armrest are void of said unit as well. The actual location, I discovered, is in the trunk by the passenger side tire bay, where a cartridge sits deep in a well. Once the  challenge of turning on each of the individual LCD screens is accomplished, the player is flawless and easy to operate. 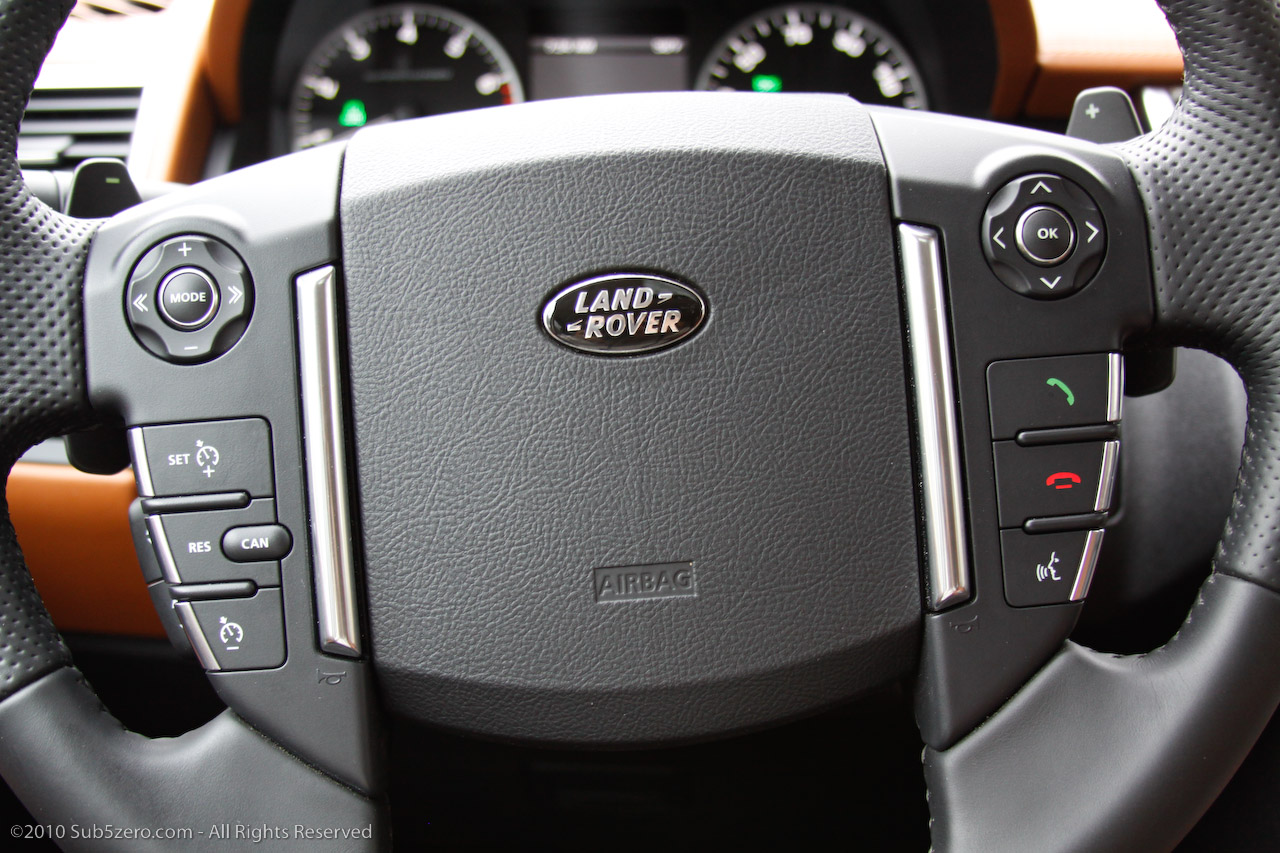 The Range Rover Sport offers a plethora of technological niceties that simply make life easier and more enjoyable. Satellite and HD Radio ($350 add-on) supplement the standard FM/AM fare and the 6-disc CD changer and the iPod and USB connectors allow for piping in almost any MP3 player. Bluetooth is available and pairing your cell phone with the link is simple and straight-forward. Just don’t assume the pass code is 0000 (it’s not). Keyless-entry comes standard and a Start/Stop button on the dash roars the engine to life. When the alarm system is activated, the mirrors tuck in nicely for a small footprint. And when deactivated, they fan out and emanate a nice white light that makes grabbing door handles in pitch black a breeze.

The optional rear-view camera and parking assist system is so good you’ll wonder how you were ever able to function without it. Backing up automatically turns on the camera, which shows not only what’s behind you on the 7-inch infotainment screen but also the predicted path as you turn your wheels. It even draws a nice box around the vehicle to show how close you are to impact or a perfect fit when parallel parking. A button on the center console activates a front parking assist which beeps according to proximity. 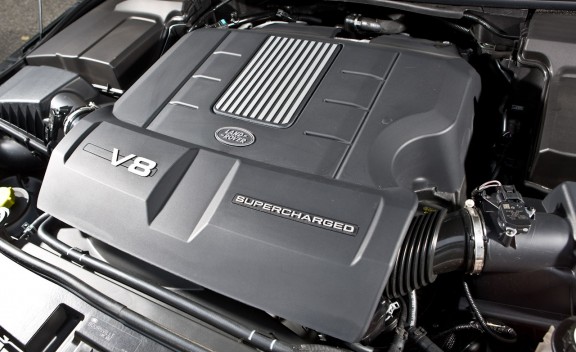 The Jaguar-derived engine in the 2010 Range Rover Sport Supercharged is definitely a highlight if not the main attraction. Last year’s S/C model put out a somewhat anemic 390-hp. This year’s power-plant blows that away by adding 120 hp by way of a 6th generation intercooled Easton supercharger. With the 5.0-liter V8 bumped up to 510 hp and with 461 pound-feet of twist, it reaches 60 mph from a standstill in 5.9 seconds. That’s not bad for a 5843 pound SUV. The naturally aspirated variant also ups the ante by 75 hp over the outgoing model, stepping in at 375-hp. It sprints from 0 to 60 mph in 7.2 seconds, with performance similar to the old Supercharged version. Adaptive headlights and automatic high beams take note of external lighting conditions and engage and disengage accordingly. In fact the system is so smart that it can detect approaching headlights and automatically toggle the high beam headlights on and off.

Both engines now have service intervals set at every 15,000 miles, which indicates, at least anecdotally, greater reliability. And speaking of the latter, Land Rover gave the nod to ZF to provide a solid name-brand transmission for this go-round, which should hopefully silence some of the past critics. The new HP28 six-speed automatic is quite smooth and offers a “manual mode” which can either be operated by pushing the shifter stick to the left or by tapping on the steering-wheel mounted paddle-shifters. It’s a nice touch and it’s comforting to know that the capability is there, but you’re about as likely to use either method as Tom Cruise giving up Scientology. 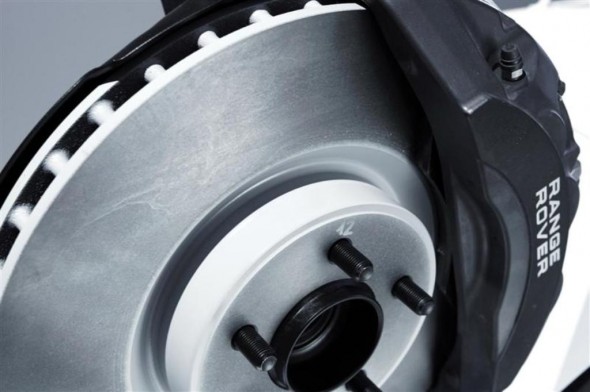 Land Rover is well aware that whipping a 6 ton vehicle around town with a 510 horsepower engine might have some inherent difficulties related to the formula p = mv. In order to work with matter and its motion through space-time, a whole host of enabling technologies helps keep everything from going awry. The Range Rover Sport relies on systems with names like Adaptive Dynamics, Dynamic Response and Active Ride Control performing thousand of split-second calculations to adjust according to any and all driving scenarios. In fact, the company has gone so far as to create the “world’s first production damping system using model-based predictive technology”. In essence, the Bilstein DampTronic shocks are monitored and adjusted 500 times a second, providing phenomenal control, even when pushing the limits. Many of today’s SUVs still feel like they are going to tip over during hard cornering but the Range Rover Sport stays surprisingly flat. And anti-roll bars prevent any head-toss on one-wheel dips.

One might expect a very disconnected steering feel from a luxury SUV like this but, surprisingly, it’s not so. The RR Sport has decent feedback, weighted balance and is power-assisted just enough so that turning is neither arduous nor so loose that small movements take out parked cars or the sides of your house. However, be forewarned that the setup of the steering ratio pushes the car quite quickly when off-center.

The 14.2 inch vented rotors up front and 13.8 rotors in back just behind the 5-spoke, 20-inch wheels, are powerful enough that stopping is effortless even when pushed hard. The Brembo-sourced brake system is fully competent to handle the power and size of the Range Rover Sport and provide little to no fade.

Land Rover’s Adaptive Cruise Control system ($2,000 add-on) is another standout. Most systems are either so chatty and bothersome that you turn them off or they make you feel like your vehicle is possessed. The Range Rover Sport suffers from neither, with excellent ease of use and a no-nonsense approach that’s refreshing. The trailing distance can be adjusted via a button on the steering wheel and the 5-inch black and white grayscale LCD setting between the gauge clusters provides real-time indicators for what settings are in effect. In LA’s parking-lot style highway traffic, it didn’t appear that the system would actually slow the vehicle down to a complete stop, which means that the driver has to take over this task when traveling under 10 mph or so.

The 2010 Range Rover Supercharged Sport may be best known for its spirited performance, but let’s not forget that this is a vehicle designed to wrestle with nature and win. The Terrain Response system offers six modes – general driving, sand, rock crawl (yes, that’s right), mud and ruts, grass/gravel/snow and dynamic mode. While we spent most of the time in General mode and didn’t have an opportunity to test out any adverse topography, the Dynamic Program was a hoot. Available only on the S/C, this mode improves body control, throttle response and quicker steering to not only provide for a more aggressive approach, but also to instill confidence at high speeds. 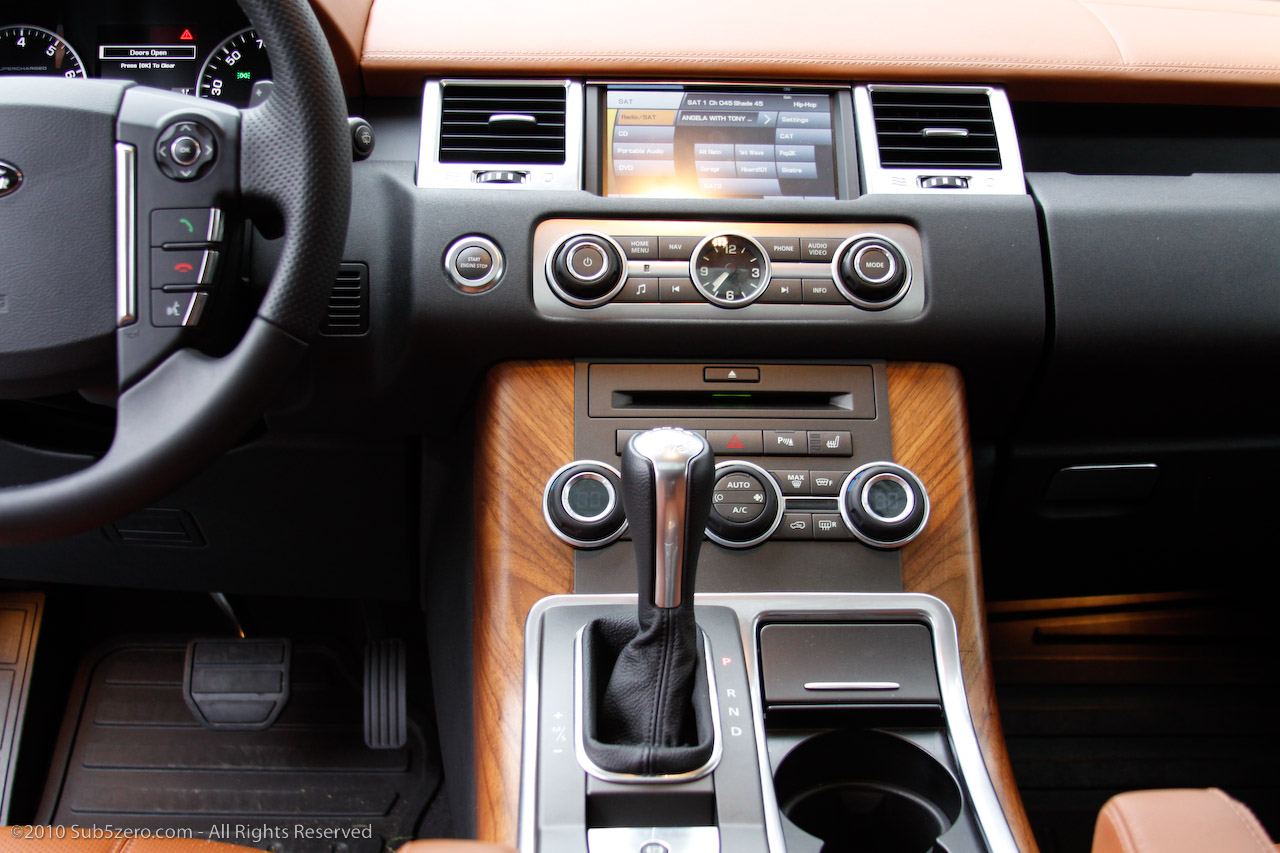 When the doors thud shut like a bank vault, sitting high and proud, it’s quite difficult not to immediately feel valiant and lion-hearted, ready to tackle the urban jungle. Somehow perched in an elevated seating arena in Lazy-Boy comfy chairs, with 510 hp on tap, surrounded by a swath of leather and wood, a feeling of calmness and euphoria sets in… This may seem a bit over the top but, honestly, this is vehicle that can make many of life’s problems disappear– if only temporarily.  Sure, the BMW X6 xDrive 50i and Porsche Cayman Turbo are both faster and the Range Rover Sport S/C is on par with the Mercedes-Benz ML550, but none of these come even close to the off-road capabilities of this baby.

Gas mileage may be of concern with city driving rated at 12 mpg and highway economy at a paltry 17 mpg. But if you can afford $82,345 for a fully equipped RR Sport Supercharged you can probably stomach the roughly $3,000 a year you’ll send on gas.

Forty years ago, when the original Range Rover was introduced, it was delivered as a utilitarian vehicle with a plastic dashboard and vinyl seats designed to be washed down by hose. Air conditioning and power steering were afterthoughts. To say the least, Land Rover has taken the brand a long, long way since then. And yes, the 2010 Range Rover Sport Supercharged does indeed feel like home away from home (I should be so lucky….).