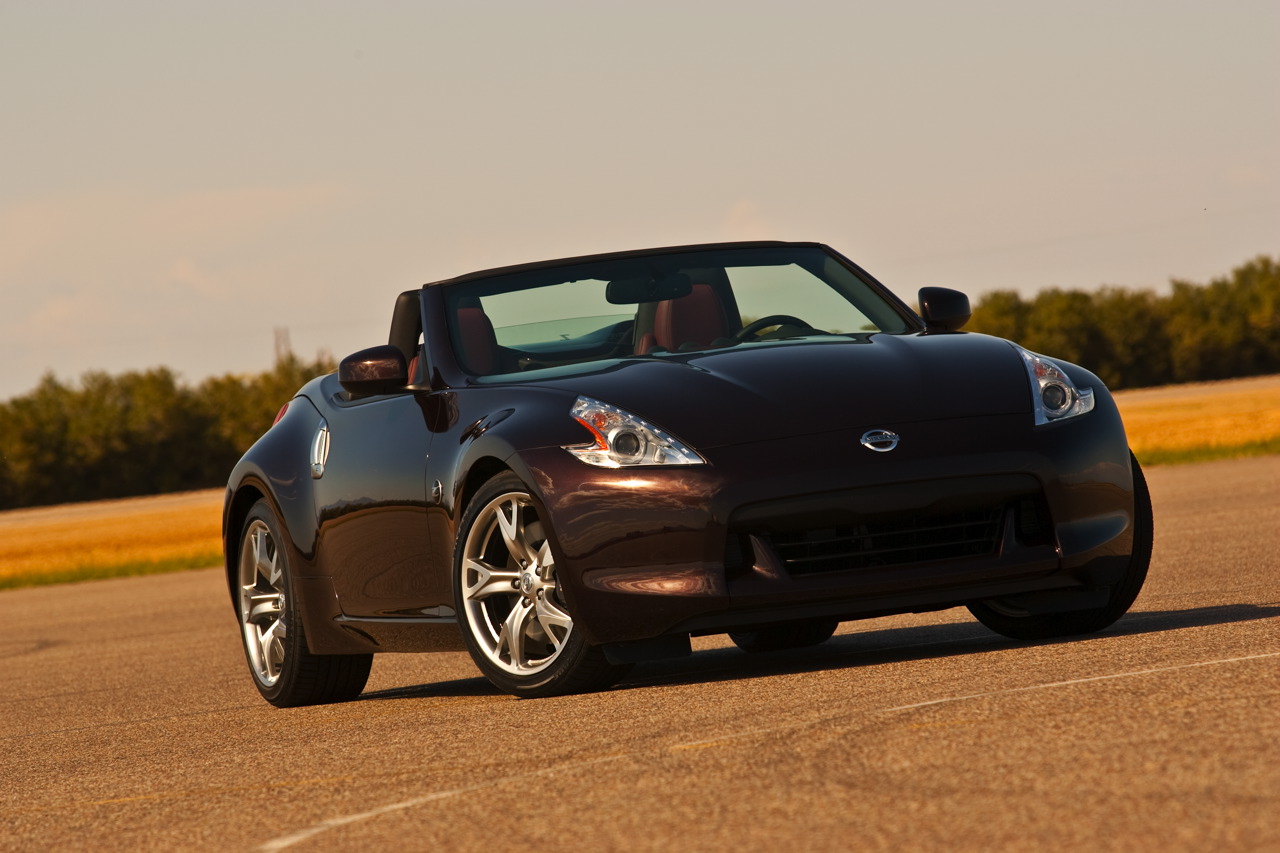 I am not a big fan of convertibles. Like a pretty girl wearing a promise ring I generally write them off as a waste of something perfectly good. The reason for this is twofold. First, convertibles are usually hardtops that have had a lobotomy. What this means is a designer spent countless hours perfecting a gorgeous coupe, and then 5 minutes before a big meeting someone from marketing said, “Can you make a convertible design too? Thanks.” In a rage the designer simply erased the top and left. So they rarely look as good as their coupe sibling. Second, chopping the top affects the car’s performance, which is against the law.

However, it’s not the idea of a convertible that I dislike, simply the execution. However, when done right, it’s something special. So when Matt Farah asked me to ride along in the 370Z with TheSmokingTire on a road trip to Pahrump, Nevada, I quickly obliged. I had read about this car plenty, but I had to see for myself whether the 2010 Nissan 370Z Roadster was a proper roadster or another soft-top tanning bed with a motor. So I sat down at Matt’s house and waited for it to arrive. It only took a moment’s glance at the silver 370Z pulling into the driveway for me to think, “That’s a good looking car.”

The long, curved hood stretched out, as if it was craning its neck for more road. The metal curved past the windshield and then rose up behind the passengers, forming round muscular rear fenders, housing aggressive 20” RAYS wheels. The top is hidden underneath a “double-bubble” hard-top tonneau cover. The design is smooth and balanced without being blasé. It doesn’t hit you in the face, nor hide among the masses. It’s not trying to look like a race car, because it isn’t one. Nor is it trying look bashful, because it isn’t. What it does is communicate exactly what this car is capable of: devouring miles, curvy or straight. This is a sports car, and it looks the part. 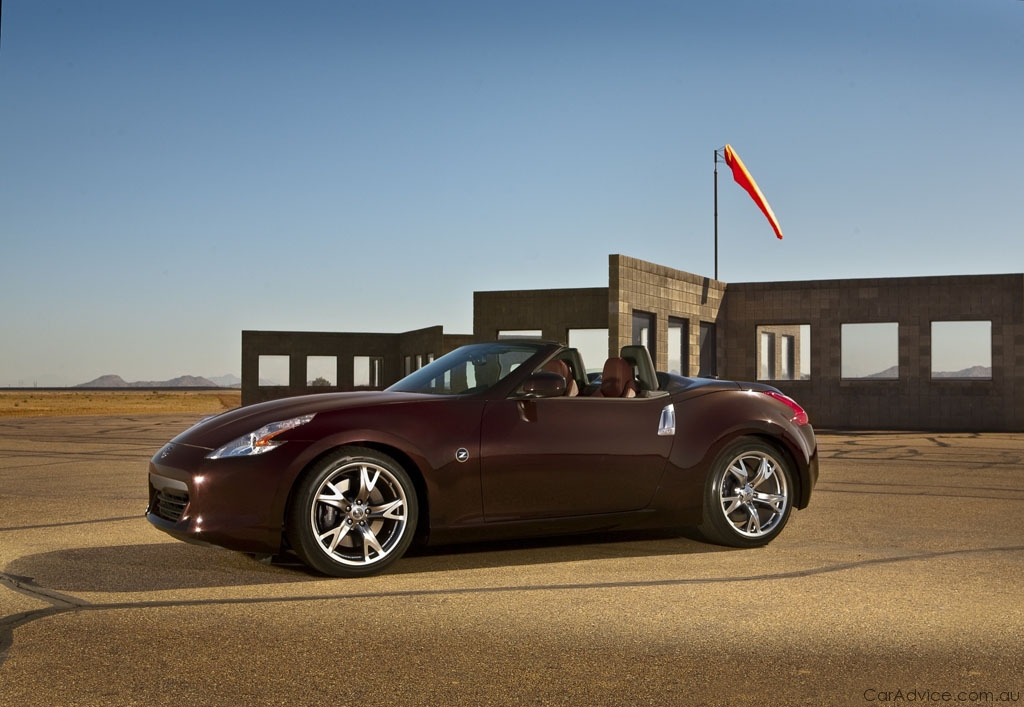 The reason it looks so good is because from conception the 370z was designed with a convertible in mind. The last Z convertible (350z) was awful, with a belt-line as flat as Kate Hudson. They designed the coupe, sawed the roof off, and went on vacation. That’s terrible, because when you design a coupe, the roof adds a lot of character to that car. Looking at the GTR, it has a roof as shapely as an ice cube, whereas the roof-line on a Vantage is as shapely as a pinup. Nissan knew this car had to look good with the top down, and they figured out how to do that. The high curve of the rear coupled with the lower, long hood gives the car a wonderful profile. It looks like the water that flows past a boat’s hull. There are some imperfections. From behind the space between the taillights and exhaust tips looks infinite, and the “vampire teeth” in the grill (carried over from the 350Z) still don’t sit right with me. But, for the first time in a while, I’m not wishing I had the coupe.

Inside is just as good. There is a kind of robot-meets-Grand-Tourer motif going on. Faux brushed aluminum blends with leather to form a comfortable and focused cockpit. The whole interior is driver-focused. The buttons you need are barely a reach away. The auxiliary gauges are aimed toward the driver. The leather seats are comfortable, capable of heat or A/C, and well bolstered. The steering wheel is nice and thick, wrapped in leather and appointed with buttons to control phone, NAV, audio and cruise control. The SAT NAV looks great, although it can be hard to read in direct sun (coupe doesn’t have this problem, just saying) and is flanked by Alcantara. Unfortunately the HVAC and stereo controls look like they were taken from a Hertz-level Altima, but I didn’t spend much time looking at them anyway. There is enough storage for two people, with enough space behind the seats for a briefcase or backpack. 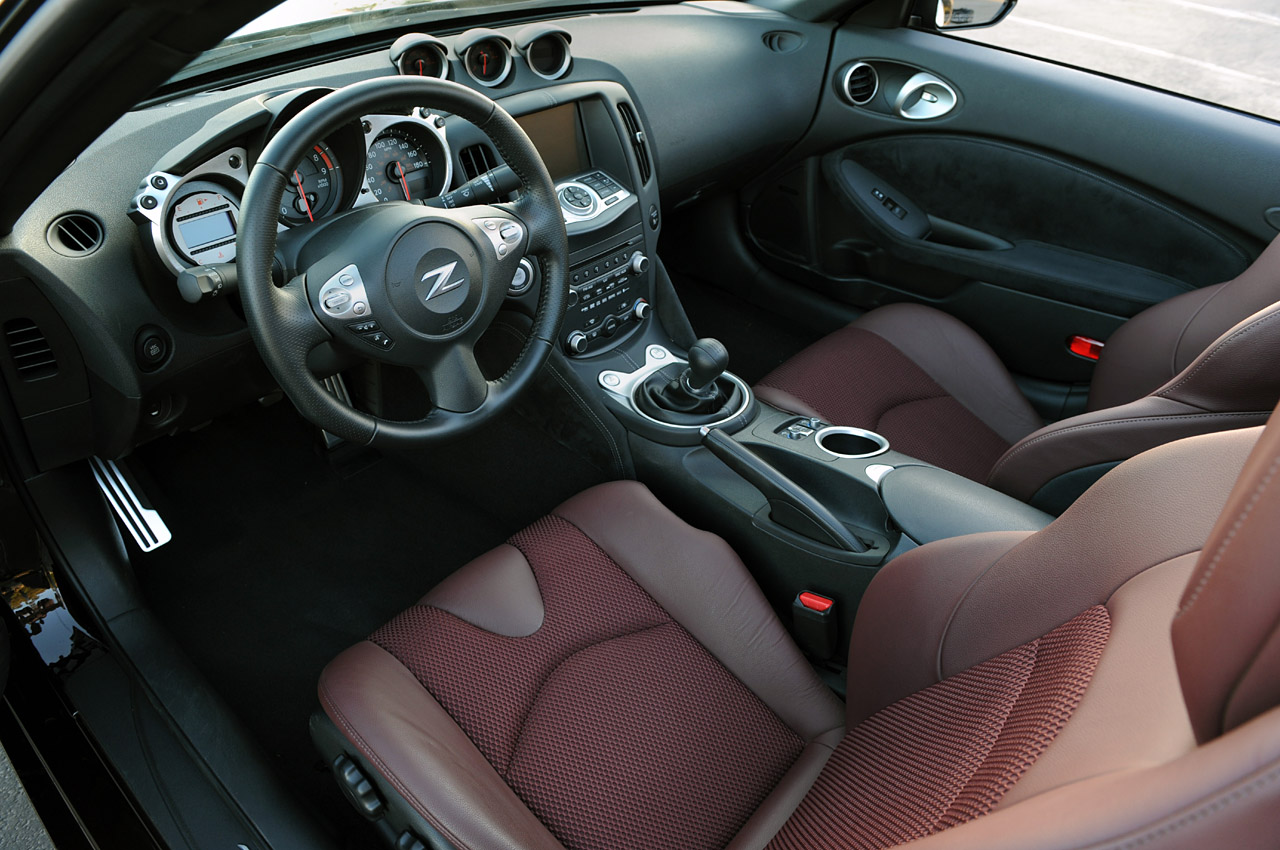 Putting the top down (or up) is a simple task, just hold down the button. The tonneau cover lifts, the top folds in, and the cover slides into place with a loud beep, letting you know it’s finished. It will even lower the radio for a moment, so you can hear the beep, a nice touch. The only bad thing about the interior is the rearward visibility when the top is up, which is fairly poor. A backup camera should be offered, because you really can’t see anything other than what is directly behind you. Parallel parking would just plain suck. But this is a case where the object is better than the sum of its parts. Nissan didn’t just stuff all these creature comforts and soft materials wherever they would fit. As is true with the exterior, there is a flow of design inside that raises the driving experience. Everything seems oriented toward the front of the car, like the whole car is drawn to something down the road, and just waiting for you to let it run. 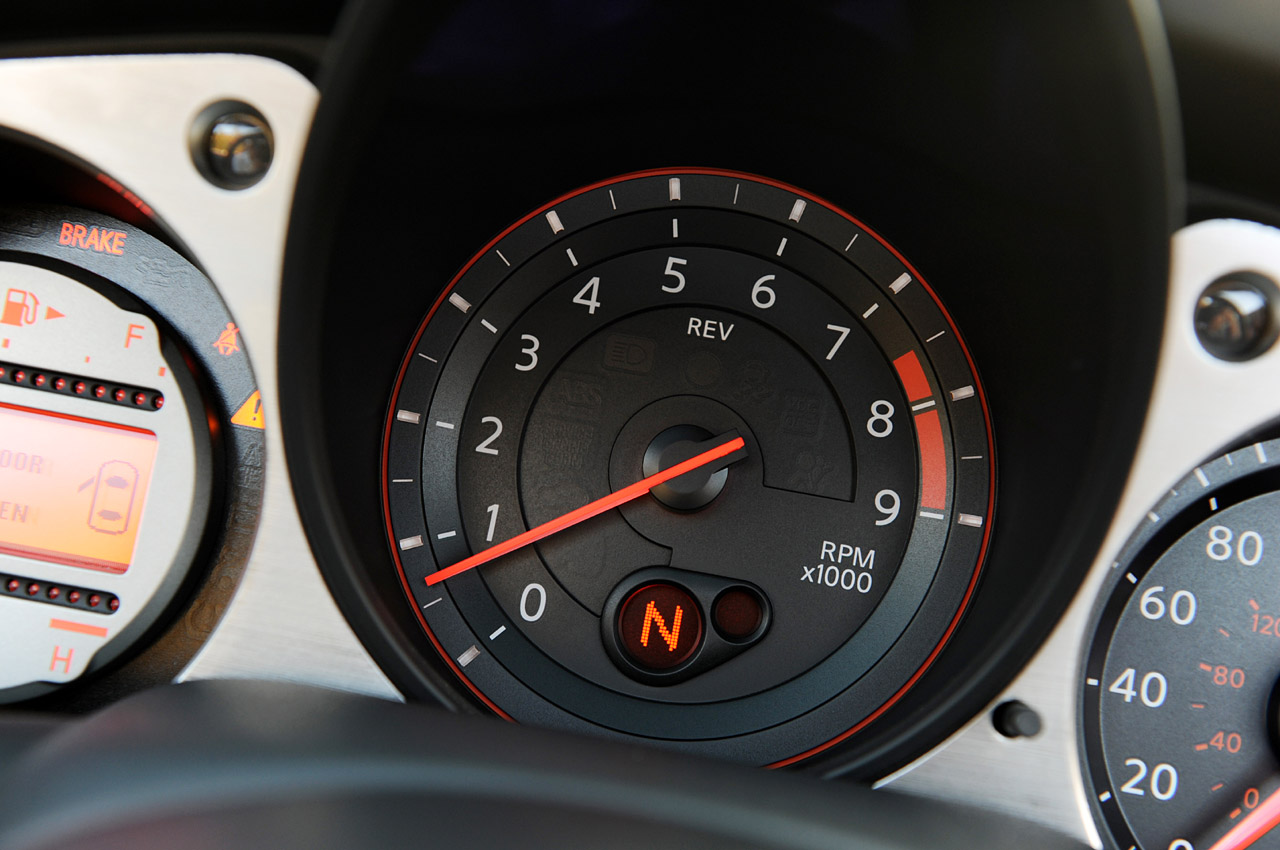 And run it does. With 332hp and 270 ft. lbs of torque, this car absolutely eats miles up. It is just as comfortable running across states as it is sprinting around a road course. The power peaks at 7,000RPM, so you do have to rev it to get the most out of it, but it pulls so smoothly and constantly it’s like there’s an electro-magnet at the other end of the highway pulling you forward. And downshifting is no problem, thanks to Nissan’s rev-matching 6 speed transmission, which functioned flawlessly. Purists will turn it off (push of a button) but if you want the equivalent of a perfect heel-toe downshift every time, the manual delivers. The shifter feels great as well, letting you feel the linkage move without requiring a body like T.O.’s to shift.

On the road, the car feels as solid as two diamonds stuck together with JB Weld. There wasn’t a shimmy, tick, squeak, rattle, or wobble of any kind. This elevated the driving experience, both on the highway and the track. The suspension made easy work of high-speed corners, elevation changes, and tight hairpins. It corners flat, and with .94g of grip (only .03 down from coupe) it has no problem changing direction on a whim. Much of that is due to the car’s relatively lightweight. At 3,430 lbs, it actually weighs 150lbs less than the topless 350Z, and only 200lbs more than the 370Z coupe. It also shows how good a convertible chassis can be when it’s given the proper attention.

The suspension is fairly stiff, so you wouldn’t want to drive down a cobble stone street while trying to drink hot coffee from a martini glass, but driving it everyday won’t shatter your spine either.

The only negative about driving this car is the sound. I’m not talking about wind-noise either (which is kept low enough to allow for completely normal conversation), I’m talking about the sounds that matter; engine and exhaust. When you start this car, it is a drama-free affair, which is not becoming of a sports car. Rather than a taut “rapp!”, a rumble, or a howl, you get something that sounds like a cat meowing underneath a comforter. It doesn’t need to be loud enough to shatter windows, but at WOT the loudest thing seems to be the butter-smooth crankshaft. A car with these kinds of curves and performance deserves a soundtrack worthy of bouncing off a canyon wall.

As a purchase option, the 370Z Roadster is as sound as it feels. Our car was fully loaded, listing at $44,000. At that price, there’s not a lot of competition. A Porsche Boxter starts at $47,000, has less power and isn’t as good looking. You could get a Lexus IS350, but they start at $44,000 and if you’re that boring you don’t need a RWD sports car anyway. The cheaper option is a Miata, but that has half the power of the Z and won’t win the beauty contest. For $44,000 you are getting a car that has every gadget possible, lots of power, great handling, and looks that put many cars to shame. If you go with another convertible it could cost more, look worse, be slower, or all of the above. This car has phenomenal build quality, is a fantastic grand tourer, an easy daily driver, and a capable weekend warrior. 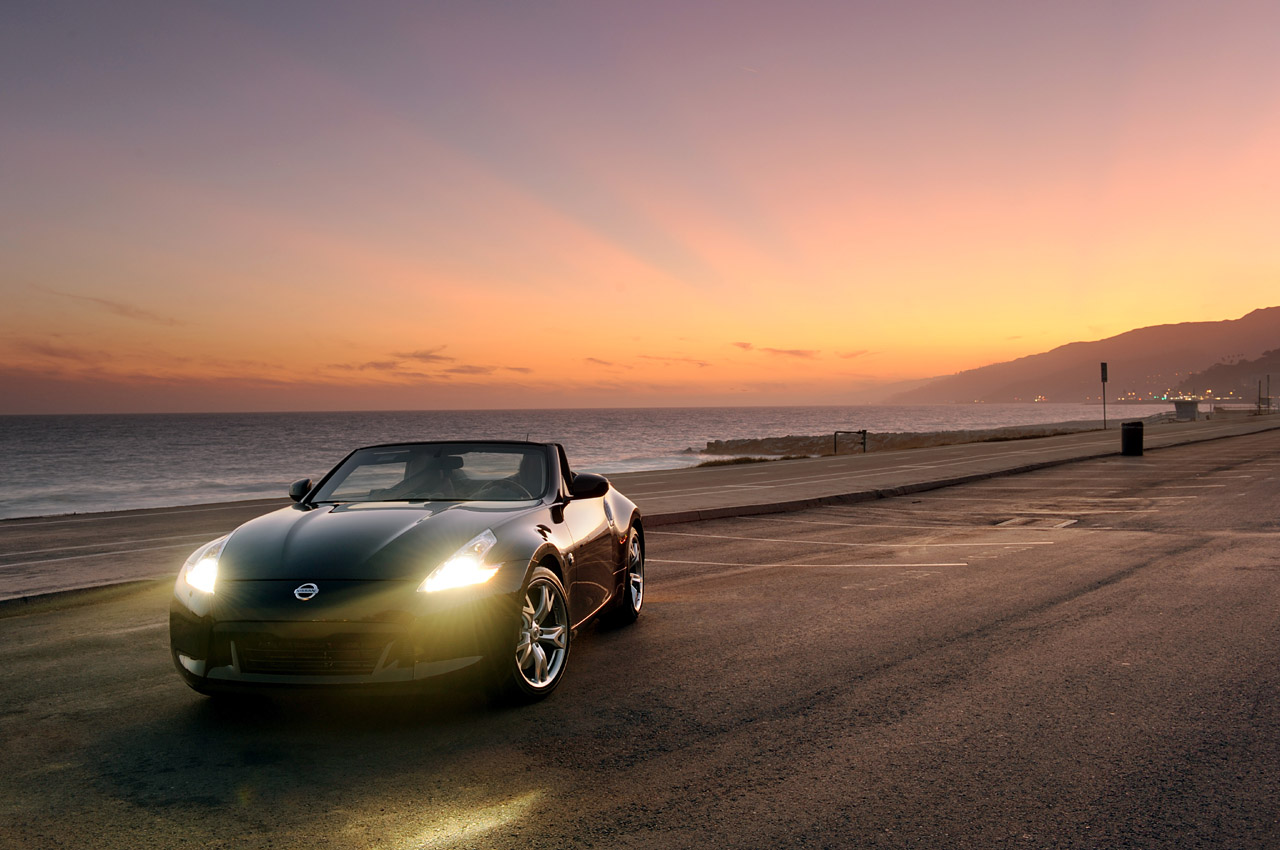 Some people just love convertibles no matter what. Put them in a 1999 Chrysler Sebring and the second you start lowering that top they turn into an infant, clapping their hands and giggling at the sun. For me, that “wind in your hair” thing is placed far down the list of automotive priorities. I would drive a cave if it had the right engine in it. But on those days when I’ve driven a good, proper, convertible sports car, I can understand why people love them. The car could be great, even with the top up, but putting it down is that scoop of Vanilla ice cream on top of a really great pie. It adds something special to a car that can’t be replicated by any coupe. That is what the 2010 Nissan 370Z Roadster does, it takes a very good car, and tops it with ice cream. And because of this it left me asking a question I never thought would come from my mouth, “Why would anyone buy the coupe?”