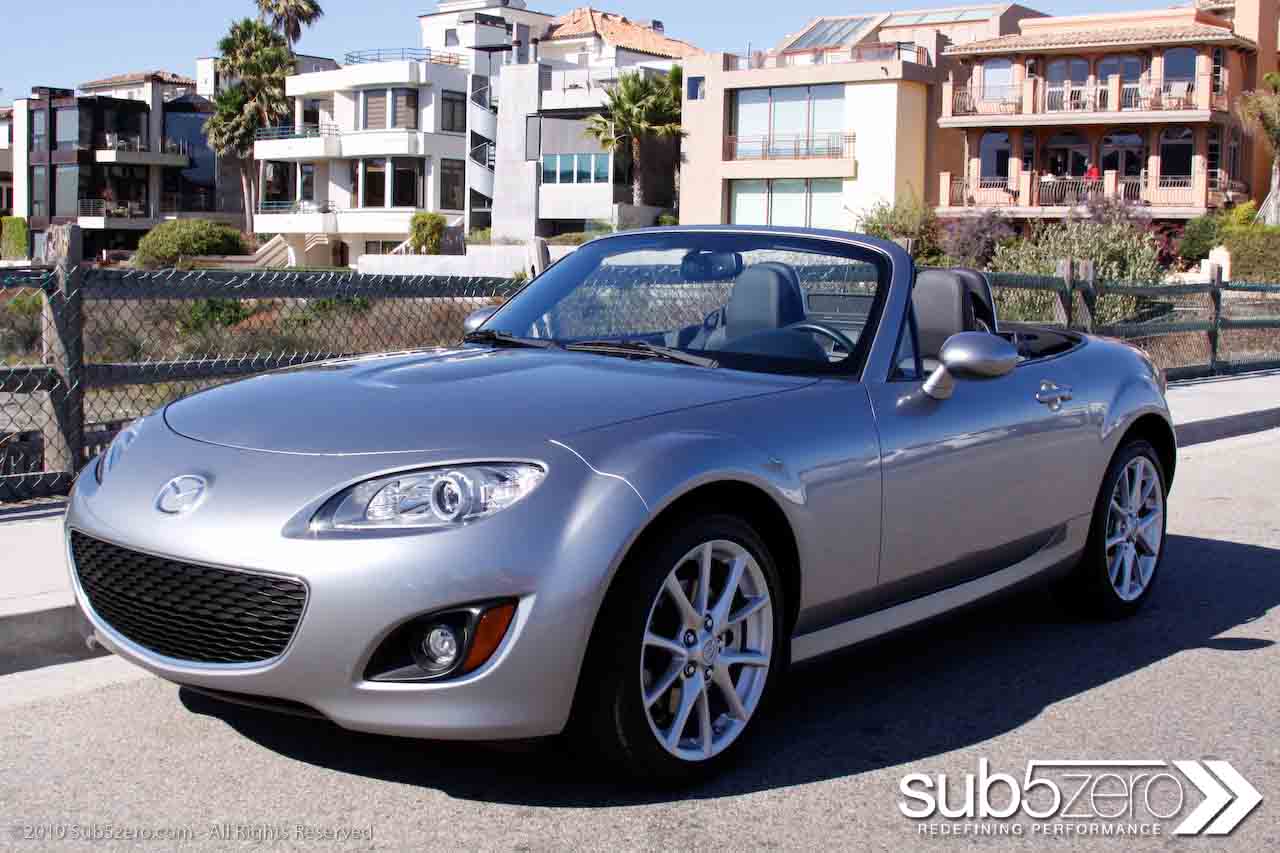 The Mazda Miata is now in its third generation after over 20 years of faithful service to the motoring community. And its determination and steadfast grip on the original mandate of a lightweight, scrappy two-seat convertible– all to be had for an affordable price– has been rewarded with well over 800,000 sales worldwide since its launch. Even with all of its commercial successes, many observers have never gotten past thinking of the Miata as a "cute little convertible." What they fail to recognize is that the MX-5 is a pure driver's car with enough attitude and balls to put a grin on anybody's face. After all, this car has its own spec racing series, not something a dainty roadster could credibly claim.

With the Honda S2000, Toyota MR2, Pontiac Solstice and Saturn Sky all falling by the wayside, the Miata is now in a class by itself, and it makes sense since this is a market segment that it has lived and breathed with no compromises for decades. The 2010 Mazda MX-5 is available in a soft-top version or power-retractable hardtop (PRHT) with either a 5- or 6-speed manual or 6-speed automatic gearbox. And it comes in the following flavors – Sport, Touring and Grand Touring – with the price ceiling hitting $29,500 fully tricked out. 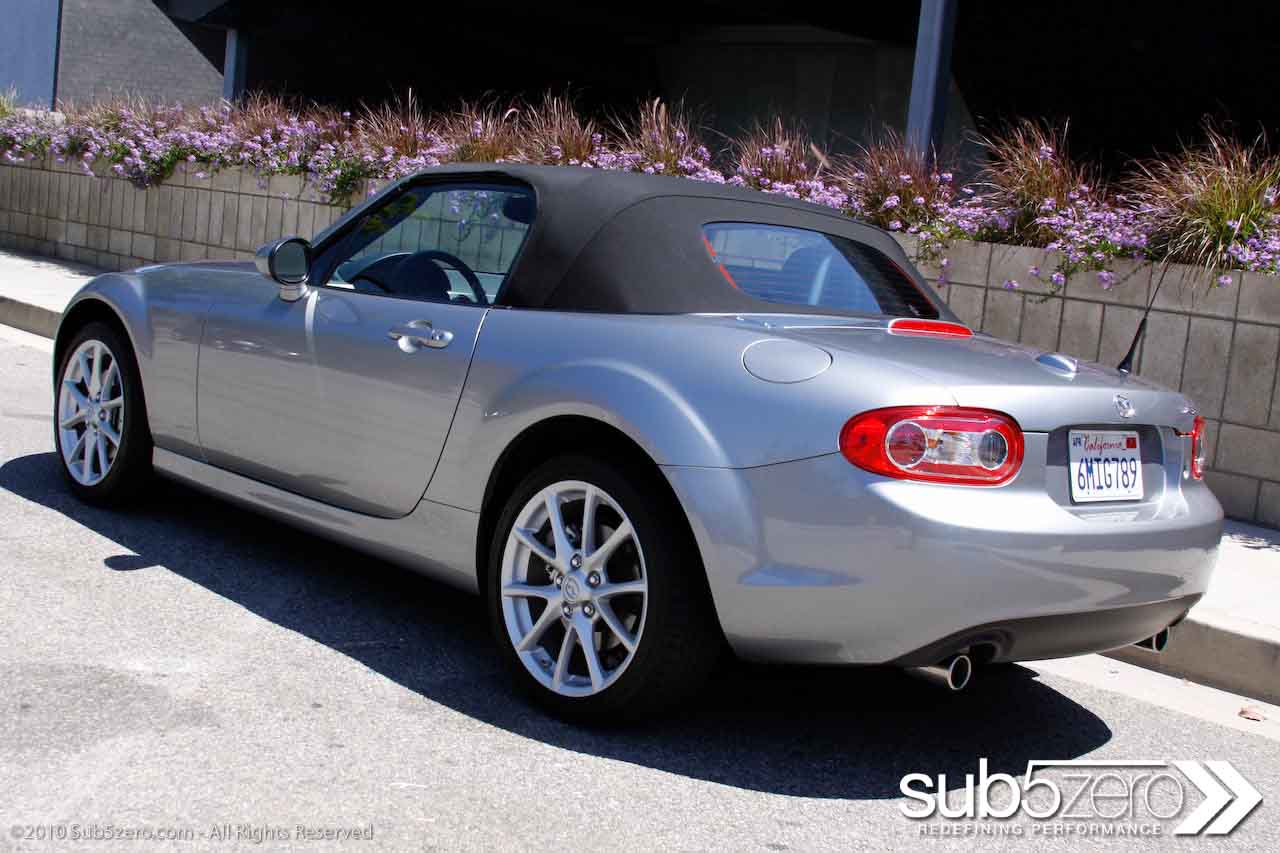 The Miata is a pretty diminutive roadster at just 157.3 inches long and 67.7 inches wide. It's hard to give anything this small a true aggro vibe but the folks at Mazda did an admirable job. The front end has a large five-point grill and a nice subtle hood bulge while the flared fenders give it a strong stance. The lights, both front and rear, still are a little cartoonish but work just fine to keep things lively. The dual-exhaust also serves as an aesthetic cue that this car means business.

If that's not enough Mazda does offer an Appearance Package which adds a front airdam, side skirting and a rear underskirt. And if you want further enhancements, there is also the option of adding a chrome fuel filler door, rear spoiler and about every possible configuration of splash and/or door guards.

The form factor is tidy enough to make parallel parking in tight quarters a breeze and provide more than enough room to exit for both driver and passenger in "Compact" parking spots that always seem as though they were designed for go-karts. Overall, the vehicle's long hood, tidy cockpit and snub rear end give it a look that harkens back to the race-cars of yesteryear. 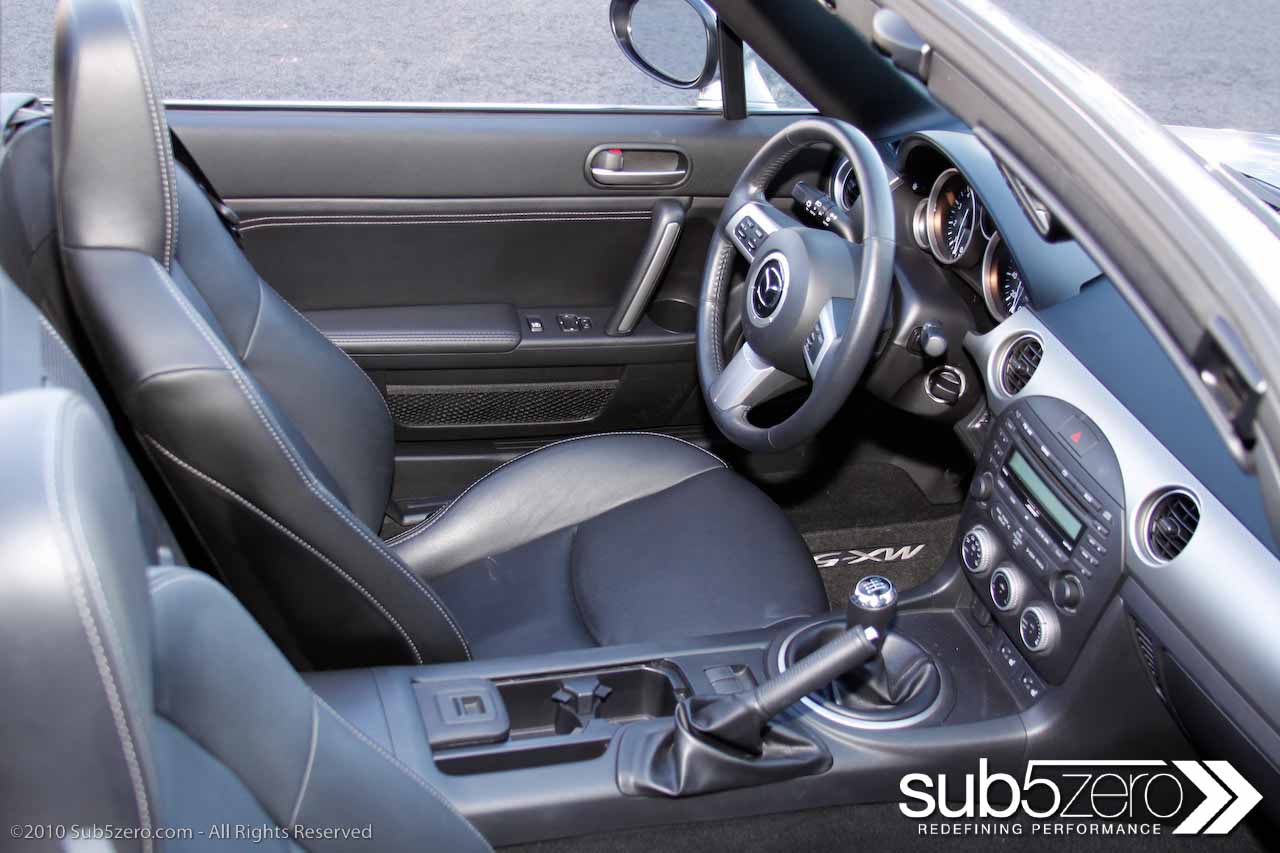 Inside, the car feels as small as it looks, which isn't really a bad thing based on its purpose. The cabin envelopes you like a glove. For most adults there is plenty of room but, like many diminutive roadsters, larger mammals may not be able to push the seat back far enough. The leather wrapped seats have solid bolstering and perfect positioning in the car, sitting just high enough for the driver to confidently see past the extended nose. If headroom is a problem, the soft-cloth top can be brought down by pushing in a button near the center top of the windshield, pulling on a lever and throwing the collapsible cover over your head. With enough practice it becomes a breeze and one of the fastest drop tops we've come across. The user manual shows the driver standing outside the car to perform this feat, but with sufficient rearward thrust the top actually comes down with the necessary force to snap into place, eliminating the need to step out. And the wind guard can be kept in its upright position at all times. 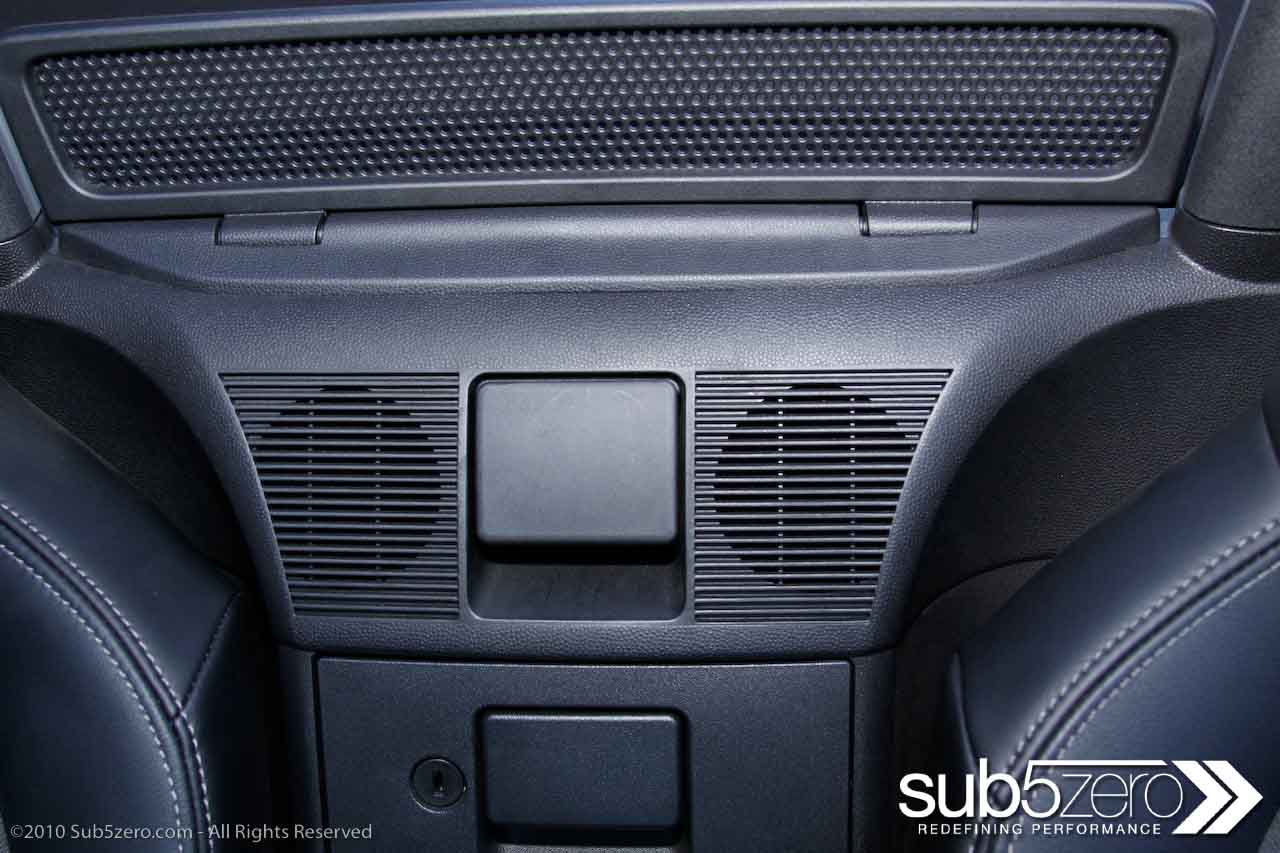 Now the same can't necessarily be said for raising the roof, which requires pulling another lever located about shoulder height against the rear wall and tugging the top back over, finally pushing in the lever to lock it in place. One frustration is that the windows have to be rolled down to accomplish this and unless you have abnormally long arms or are a superhero who claims membership in the Fantastic 4, you probably will have to step out (and then back in). An auto-sensor that drops the windows a tad upon initiation and some better access might resolve these two issues. 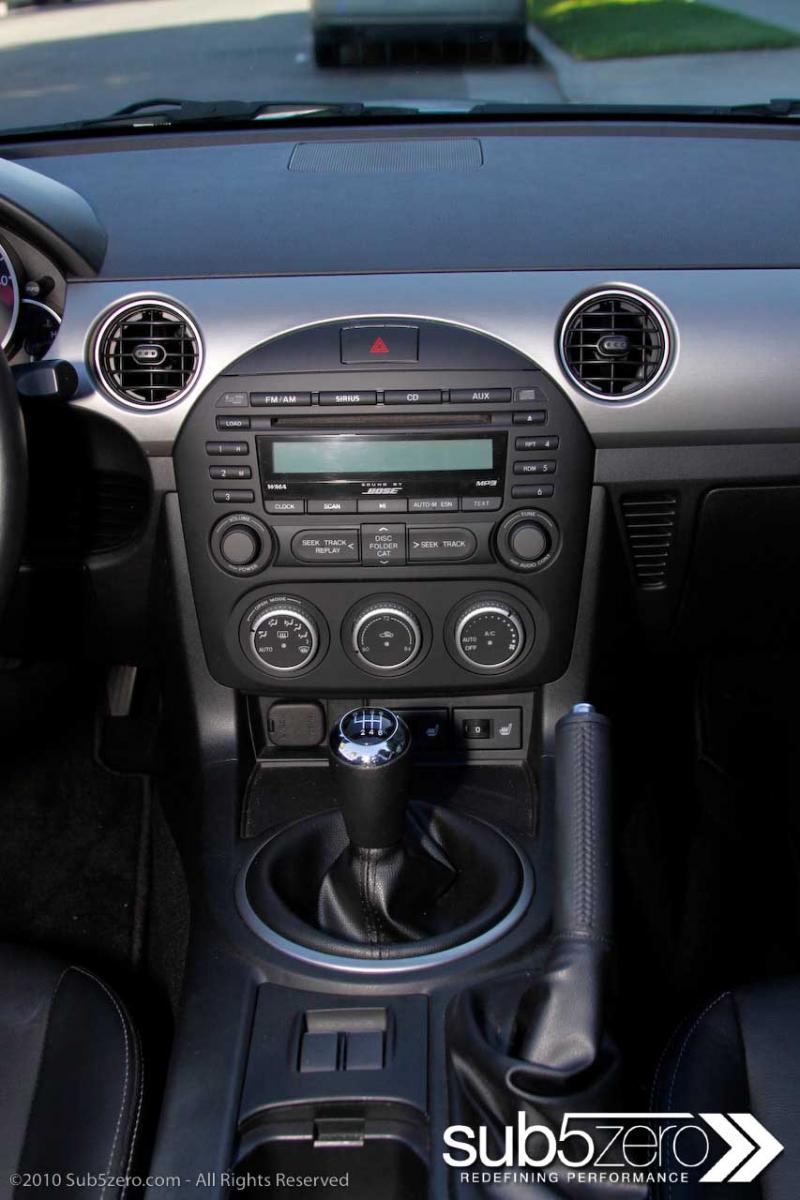 The controls are all well-placed and quite simple to operate. Our model was fully loaded including the optional Premium Package and came with anti-theft alarm, cruise control, power doors/windows/mirrors, keyless entry, fog lamps, auto-dimming rearview mirror, bluetooth and a trip computer. One anomaly is the ignition which feels exactly like the standard starter sans key. A start/stop button would seem like a much better option. The automatic climate control functions are about as idiot-proof as possible and the heated seats kick in quite nicely, which was actually fantastic for top-down travel on cold California mornings. There are sufficient cup holders with two located in the center stack and one in each door. Don't expect to slap in a thermos but your Starbucks will ride safely. 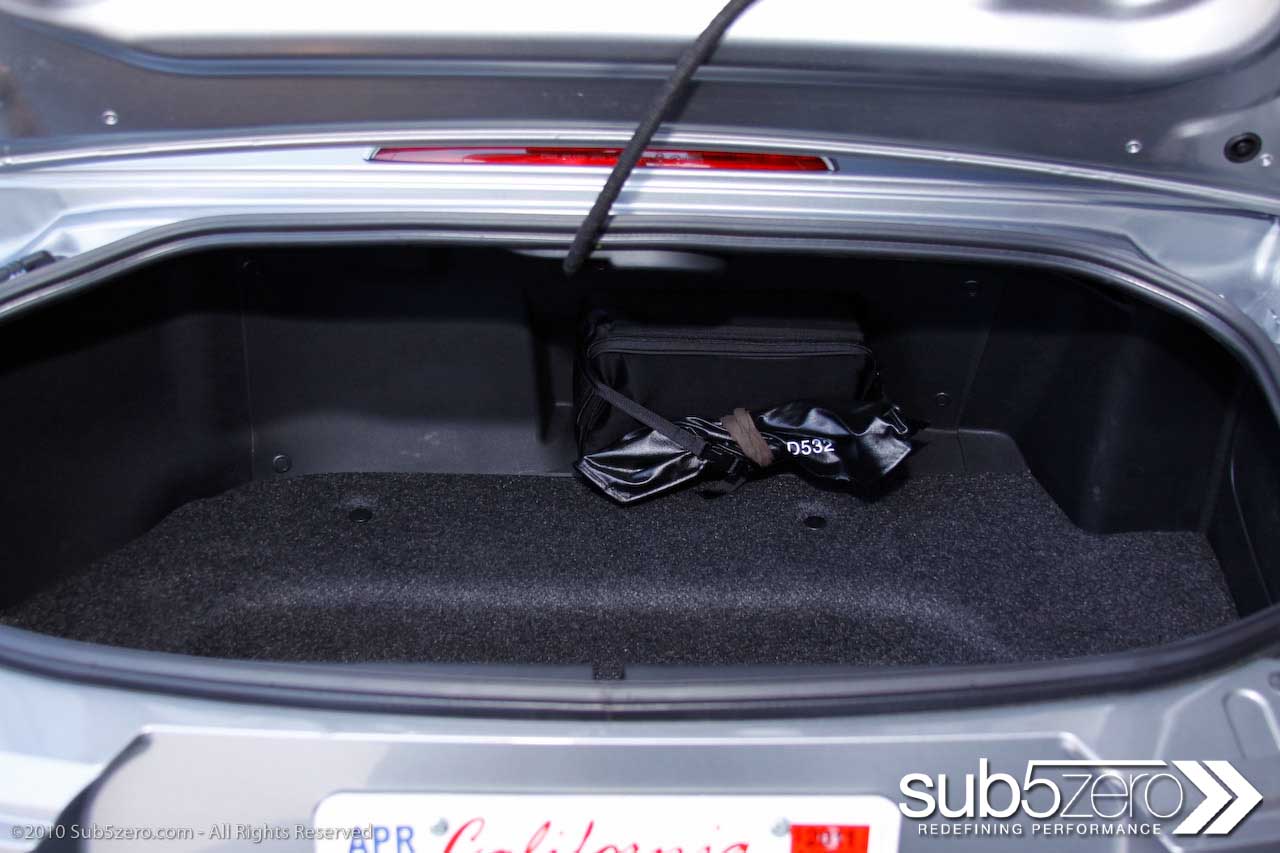 It is no surprise that the trunk is wanting for space. With 5.3 cubic feet in a perfect rectangle you either need custom made luggage or an investment in a good duffel bag for weekend getaways. If golf is your thing, plan to roll solo and give your clubs first-class treatment strapped-in up front.

The audio system is provided by Bose and doesn't disappoint with the traditional punchy sound we've all come to know and love. That said, it is a tad underpowered to drown out the whine of the high-revving engine and road noise on the highway. This is probably due to a lack of options in directional placement of the 7 speakers, causing a loss of fidelity. The six-disc changer is snappy and super simple to swap your favorites tunes in and out. And the optional Sirius satellite radio is integrated nicely. There is also an auxiliary input jack for your favorite MP3 player. Steering-wheel mounted controls bring it all together to keep your eyes on the road. 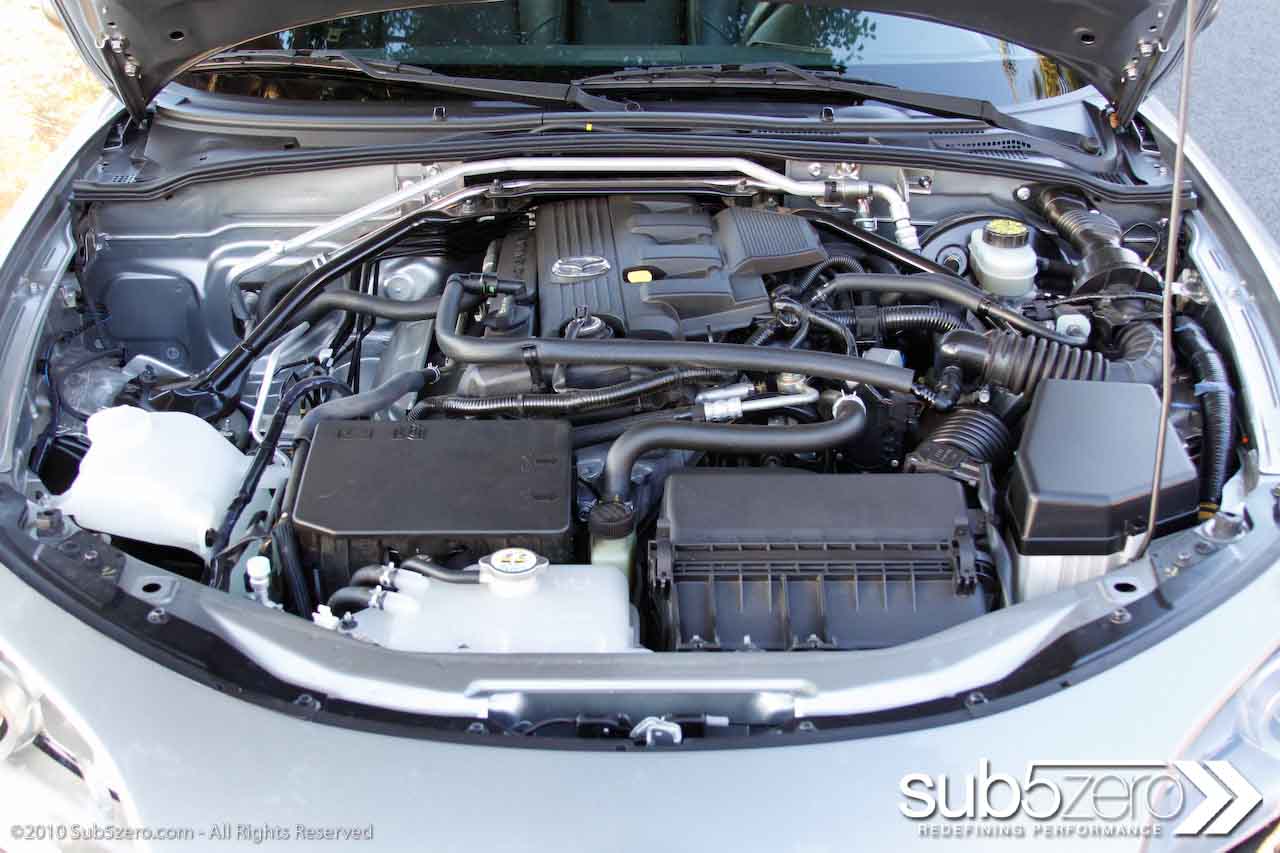 The first thing you notice about the Miata MX-5 is how tight it’s wound and that this is a car meant to be pushed hard. Power comes by way of a 2.0-liter, multi-port fuel-injected inline four-cylinder engine pumping out 167 hp and 140 lb-ft of torque. Power junkies may be yawning right now but keep in mind that this car weighs less than 2500 pounds. The sprint from 0-60 mph took us only 6.9 seconds, which is not too shabby and actually felt much quicker in practice. Fuel economy is listed at 21 in the city and 28 on the highway.

The leather-wrapped steering wheel and leather-wrapped shift knob provide excellent grip and feel while whipping the car around town. The hydraulic rack-and-pinion set-up in conjunction with a strut-tower brace up front provide instant feedback and spontaneous turning action with the slightest touch. The transmission is absolutely flawless and one of the best in the business, with short, precise throws and an uber-high rev limit of 7,200 rpm. The whine of the engine is absolutely intoxicating. And to take things a step further Mazda offers something known as an Induction Sound Inhancer which is a bevy of tuned pipes that move the engine induction noises up to the cowl at the bottom of the windshield. Bravo!

The biggest joy of driving the Mazda MX-5 is running through any type of curve with canyon-carving being an absolutely sh*t-eating-grin-inspiring experience. This is compliments of the optional sport-tuned fully independent suspension that has been faithfully tweaked after feedback from the many Miata’s on the race track on any given weekend. The car is well-balanced and so agile that you'll question why you have been lumbering around soon long in your sedan with that muted, disconnected feel. For those looking for intimate details, the front suspension sports double wishbones with aluminum control arms, Bilstein monotube shocks, coil springs and a nice chunky stabilizer bar. The rear multi-link system features more of the same type of hardware. The Sports Package also include a limited-slip differential as well. 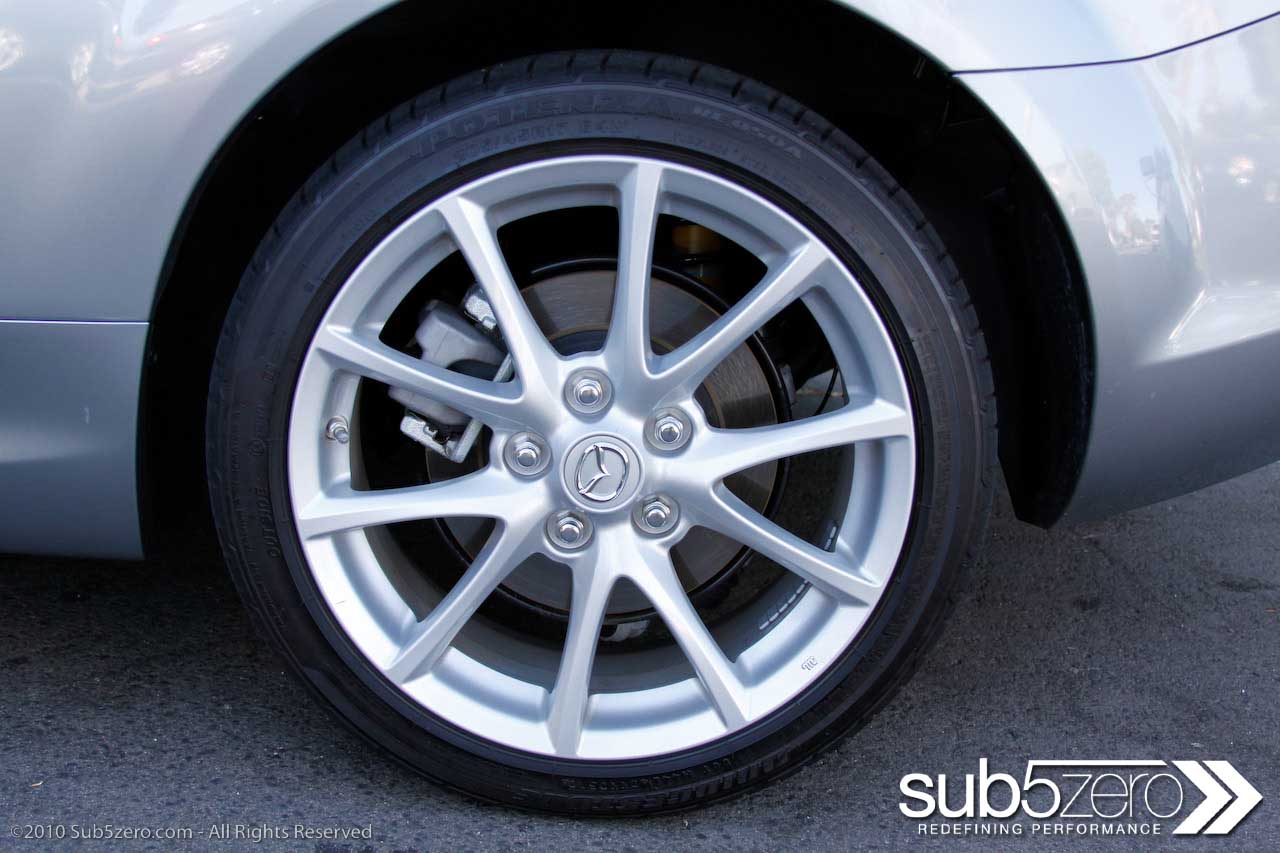 Stopping power is provided by 4-wheel, power-assisted steel disc brakes measuring 11.4 inches up front and 11 in rear. Anti-lock disc brakes are standard and Stability Control available on the Grand Touring model. And, of course, the ability to disable electronic traction and have at it was a blast. The wheels on our tester were 17-inch aluminum alloys wrapped in high-performance Bridgestone Potenza tires, which provided solid grip. 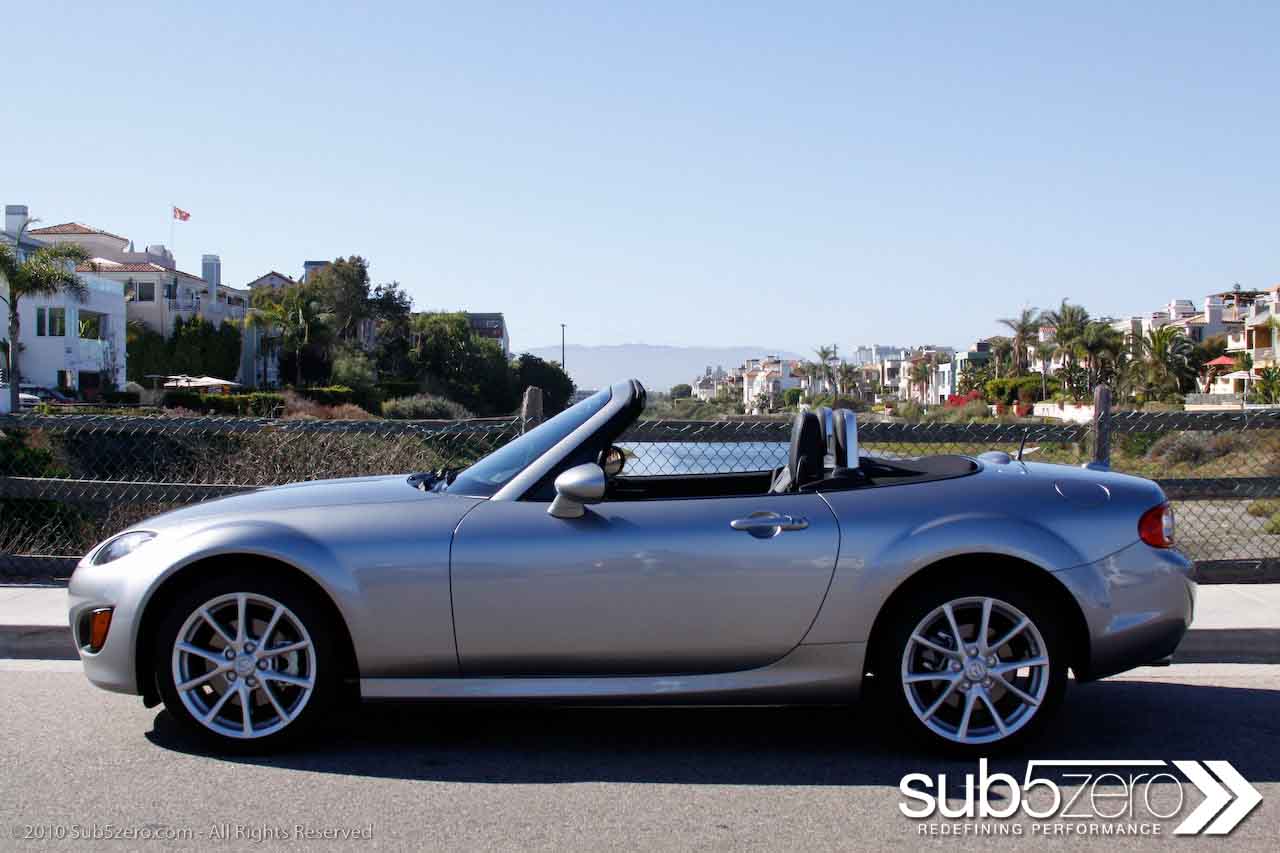 The 2010 Mazda MX-5 Miata Grand Touring may not be perfect but it nails its mandate — to provide open-top spirited motoring in a nimble package that is both affordable and highly entertaining. In fact, for the money, there isn't any other vehicle we can think of that delivers this much doggedness and moxie. It may not be a lady-killer and your juvenile friends may question your manhood but true car junkies will give you serious props.

As I drove the Miata for a week, one trend I noticed was that the unsolicited chatter from other drivers and passers-by was almost exclusively initiated by middle-age men. I'm always curious as I test various vehicles what the general reactions are from the public and this one was interesting. Obviously, this type of "evidence" is completely anecdotal but quite telling.

As one of the only real true sports cars on the market today, the Miata is the perfect vehicle for the autofile who has ‘paid his/her dues’ and is looking for a little bit more thrill in life. This is not a family car or even the best daily driver if you lug lots of stuff around, but for pure thrill that's light on your wallet this is a no-brainer. If you are a young guy with a strong sense of self and little need for creating an uber-macho persona, I also say have at it. In fact, you may even outmaneuver that smirking BMW driver next to you. And if you are a middle-ager looking to rekindle that joy of driving in your life, picking up the 2010 Mazda Miata MX-5 Grand Touring is an unequivocal win-win.