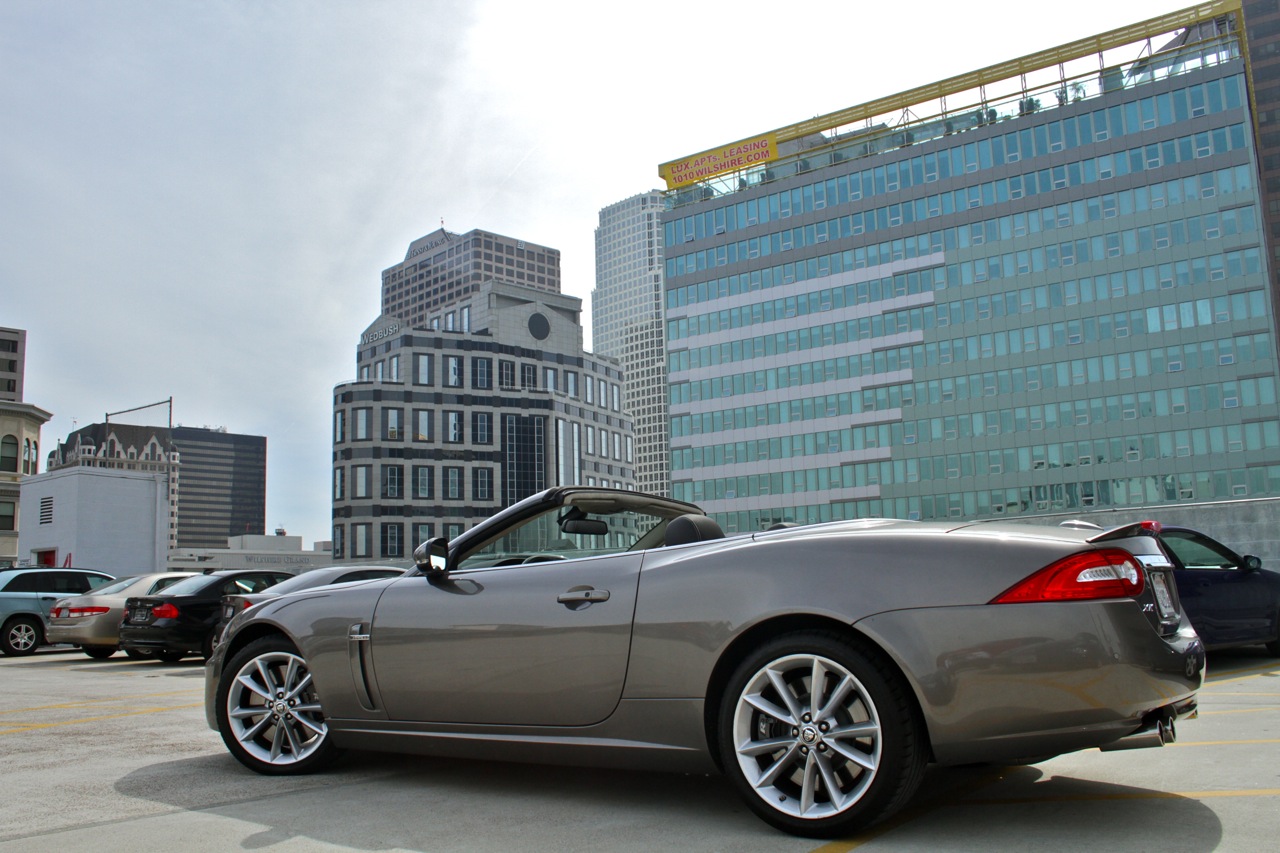 Back in 2005, Jaguar’s hottest selling model of all time ended its production run. That car was the XK. In the spring of 2006, the 2007 model emerged as a completely reworked vehicle that Jaguar hoped would continue to see record sales. The challenge for the company has been competing in a segment – Large Premium Sports Cars – that doubled from the mid 90s to the mid 2000s. Jaguar sought to blend the two major groups – grand tourers and sports cars – into a single outstanding car.

That generation ran through 2009 offering a 4.2-liter V8 good for 300 hp and 310 lb-ft of torque as well as a supercharged variant providing 420 hp and 412 lb-ft of torque. But with everyone stepping up their game, Jaguar quickly realized that even though they had satisfied their goal, they certainly had no BMW M6 or Mercedes-Benz SL65 AMG killer… 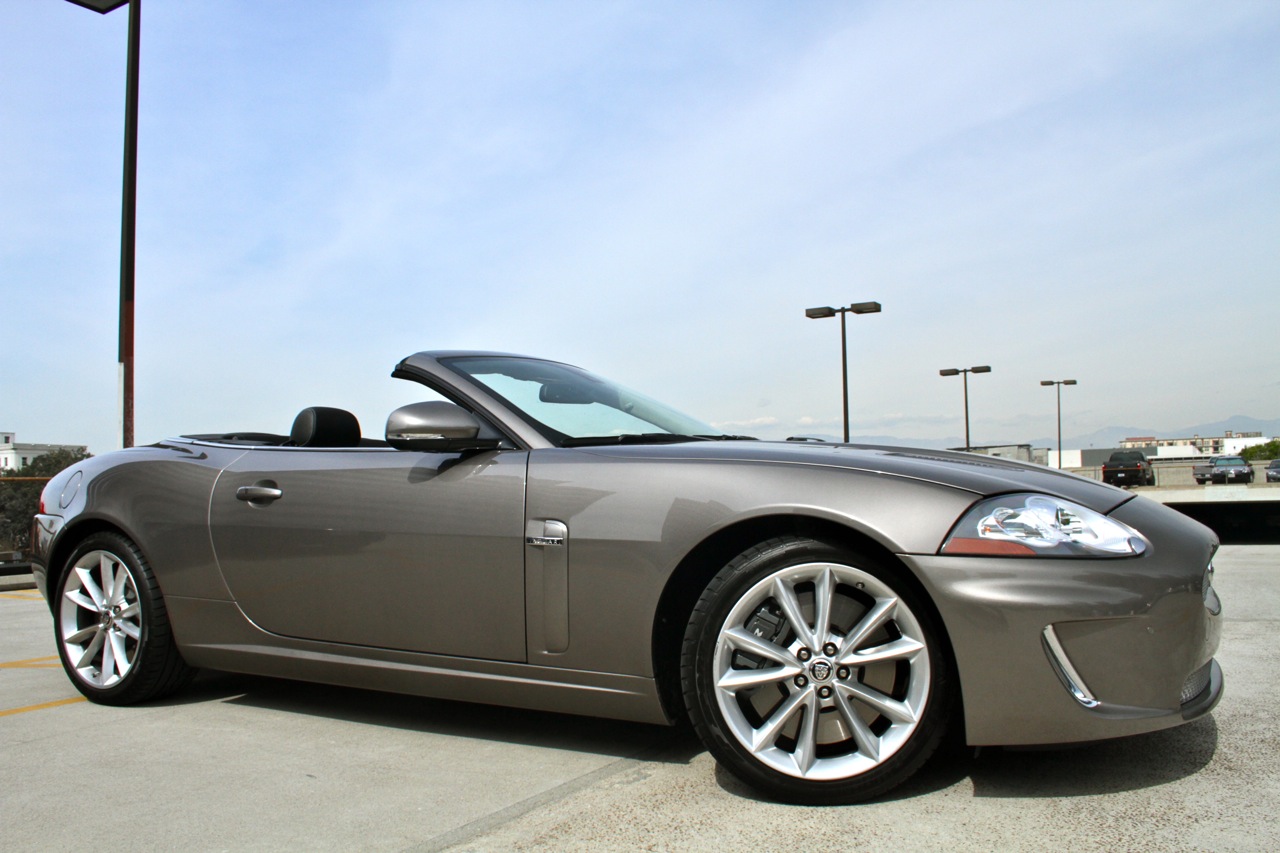 When you think of Jaguar, tires evaporating into plumes of smoke is not the first thing that comes to mind. And rightfully so. The company has made a name for itself by producing solid touring vehicles that get you from point A to point B in style and luxury. The 2010 Jaguar XKR Convertible doesn’t depart from the company’s core principles, but it does add a performance spark that instantly transforms the car into an entirely different class of vehicle: the entry-level supercar.

With a new Gen III 5.0-liter AJ-V8 engine sporting a Roots-type supercharger and intercooler, the updated 2010 Jaguar XKR has 510 horsepower and 461 lb-ft on tap. If there was any question as to what’s under the hood, large air inlets with the words “Supercharged” sit on either side of the bonnet. A mean-looking front fascia with aluminum-finished grills, vents for and aft of the front wheels, a small rear spoiler and quad exhaust pipes further allude to its performance aspirations. The front bumper, side mirrors with LED repeaters, side power vents, rear LED tail lights and lower rear bumper spoiler are new for this year, but the changes are subtle. The car weighs 4,079 pounds but can sprint from 0 to 60 mph in just 4.6 seconds, which is 3/10ths faster than the outgoing model. By using direct injection, variable valve timing and a variable-geometry intake manifold, the XKR, with all its brawn and might, manages to maintain the same fuel economy while actually decreasing its carbon footprint.

If the XKR resembles the swooping bonnets, low-slung roofs and wide stance of Aston Martin marquees, that’s because Jaguar’s design director, Ian Callum, was one of the driving factors behind the creation of the DB7, Vanquish and Vantage coupes. Even though the XKR favors these exotics in more ways than one, it is still Jaguar through and through, and not just a result of its iconic badging and leaping cat emblems. The signature Jaguar accents, contouring and design aesthetics all still make strong appearances. 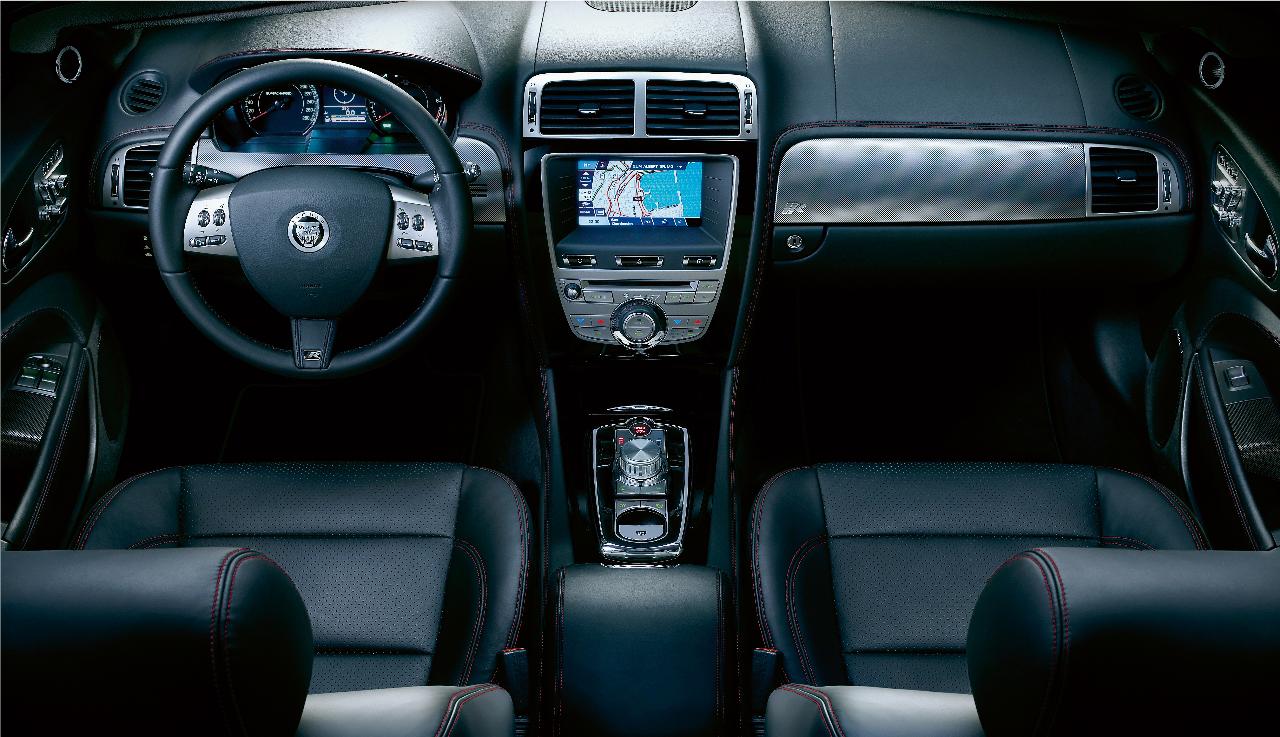 Inside, luxurious fit and finish abound, from the leather upholstery and contrasting stitching on the dash to the piano finish and chrome trim on many of the buttons, knobs and switches. Our model featured dark oak veneer with healthy doses of wood found in all the right places. The only real knock is that the area surrounding the infotainment area and the steering wheel-mounted controls used silver painted plastic which looks cheap and out of place amongst such decor. The interior is surprisingly simple which is a good thing. The touch-screen-based multimedia system controls the audio system, climate control and satellite navigation which covers 90% of the necessities. The system is chock full o’ features and functionality but is surprisingly easy to use. That said, the interface is a little dated and could use some life, and the response time was not as immediate as one would like.

One thing that I found curious was that the full-blown ash tray and cigarette lighter (which Jaguar calls Cigar lighter), a feature that has long since been banished from most cabins, is actually accented, with plenty of console real estate adorned with a special, auto-retracting cover. This means that there are still plenty of suburban matrons puffing on Virginia Slims and bull-headed macho-men tugging on stogies who buy these rides.

The seat controls are just about the coolest I’ve come across. Not only are the usual suspects of lumbar control and the ability to move forward and back in effect but the bolster support tucks you in nice and tight. Coupled that with the three heat settings and one cooling, and three memory functions and you’ve got the perfect setup. The heated steering wheel is just icing on the cake.

The 2010 Jaguar XKR also sports all of the electronic wizardry one would expect at this price point including a tire pressure monitoring system, keyless entry/start, portable audio connectivity for iPod and USB devices, adaptive cruise control and an anti-theft engine immobilizer.

Phenomenal–plain and simple. The entire driving experience is truly enhanced and accentuated every step of the way. The start/stop button pulsates like a neon sign in the red light district. Once you’ve given in to temptation, pressed your foot on the brake and depressed the starter, the engine roars to life, elevating the rpms much more than probably necessary, but the point is well made – this car is begging to be pushed hard. In fact, the gear shift control, the JaguarDrive Selector™,  actually rises up from its flush mount in the center console letting you know that it’s time to get down. Turning the circumference of the dial clockwise takes you from Park through Reverse, Neutral and Drive. At the end of the twist, there is a little resistance, but by pushing down and clicking the knob all the way to the right, the car enters Sport mode, pretty much the only place you want to be once you discover its existence. 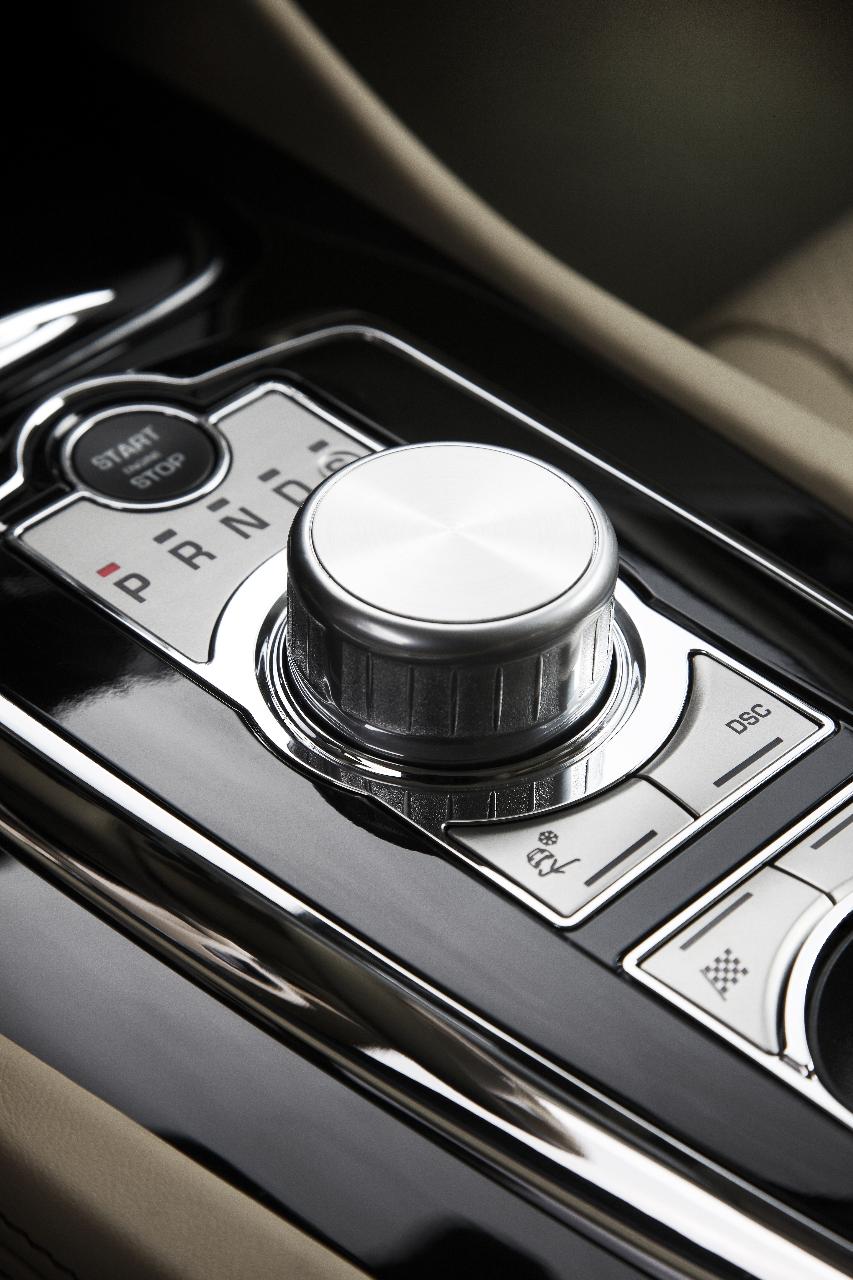 The 2010 Jaguar XKR uses a ZF 6-speed automatic transmission, but don’t be put off just yet by the slushbox. Steering-wheel-mounted paddle shifters let you take control at the first pull. If you get lazy and the car senses you are no longer actively managing the gearbox or you hold in either paddle for three seconds, auto mode kicks back in. At this point life’s good, you’ve got your regular drive mode for cruising around town and sitting in traffic and a more aggressive gearing for Sport mode when you’ve got a little room and you want to have a little fun.

With 500+ horsepower on tap, either driving mode is more than sufficient. But Jaguar has a little trick up its sleeve. Just below and to the left of the dial are two hot zones. The one on the left is Dynamic Mode and the other is Dynamic Stability Control. By activating the former and selecting options from the later, the XKR turns into a different beast all-together. Dynamic mode tweaks the engine management for a much more responsive throttle, quicker shift times and improved body control. Dynamic Stability Control provides selectable modes including Normal, Winter, Trac DSC and DSC OFF for those brave souls.

The Jaguar XKR pulls hard in every gear and the transmission is pretty much flawless. The rev-sync makes downshifts almost imperceptible except into first, which can be somewhat jarring (but who does that anyway?). That said, the car seems to be totally okay rolling from 2nd and, even at a complete stop,  will hold this gear if in manual mode, an anomaly in today’s sport-shift world (which, when the revs drop too low, will automatically serve up 1st).

Handling is superb as the all-aluminum frame is stiff and stable. Jaguar’s aptly named Computer Active Technology Suspension (CATS) is replaced with a new Adaptive Dynamic system which is a much more sophisticated system offering active damper tuning on the fly,  taking hundreds of readings a second to control body vertical movement, roll rate and pitch rate. Coupled with the Active Differential Control (ADC) system, basically a limited-slip differential controlled via an electric motor capable of providing fully automated adjustment to vary its locking torque, the car is extremely precise.

The convertible top drops in about 18 seconds and folds nicely into the truck, which, unfortunately, has very little room for such a large car. Furthermore, the back seats are pretty much useless for anything but a bag of groceries and the car has surprisingly little storage space.  There is enough cargo area for two people to make a weekend getaway, nothing more. You may be super comfortable on a road trip but get the in-laws to stow your luggage in their mini-van if you plan on long-hauling it.

And let me finish this with a topic near and dear to my heart – auto fidelity. The Jaguar XKR has one of the finest sound systems I’ve come across, after being thoroughly disappointed by plenty of high-end, high wattage systems that just failed to wow.  The Bowers & Wilkens components are so well-designed and the acoustic mapped so efficiently that even with the top down the clarity and delivery is stellar.

A week in the 2010 Jaguar XKR Convertible is a little like being on the perfect vacation. For that short period of time in its presence, I was transported to a world of luxury, comfort and sporting thrill. Inside the cabin, everything else seemed to slip away and it was all about the driving experience. But I also must confess that the cultural/ socio-economic dynamics of living in LA and driving a $102,000 sports car came into play oh so very often. Bentleys and Mercedes that would never let me pull out in front of or cross against, paved the golden road for my travels. Girls that wouldn’t have looked twice in the direction of my Acura spilled lattes on their laps. Guys gawked and more than once almost ran into the back of the car in front of them. And showing up at Supercar Sunday with Ferraris, Lambos and Porsches everywhere the eye could see, I was pleasantly surprised at the number of compliments and big-up the XKR Convertible received amongst a sea of exotics. And did I ever voluntarily spill the truth– that I was just an automotive journalist doing a road test? Not on your life….