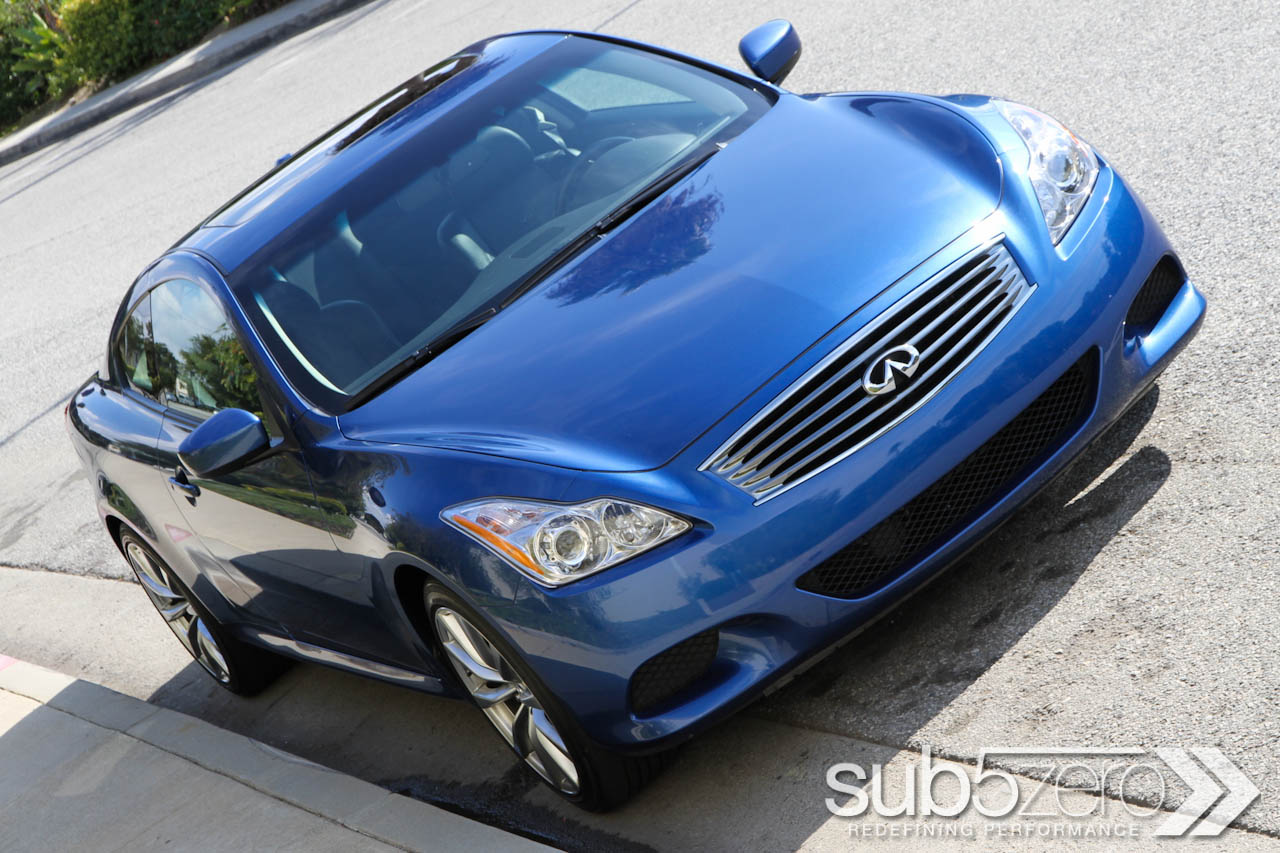 The first Infiniti G model reached our shores in 1991 and was advertised as a car "Born in Japan. Educated in Europe. Now Available in America." That slogan still seems relevant today with the latest incarnation of Infiniti's entry-level luxury sports car. 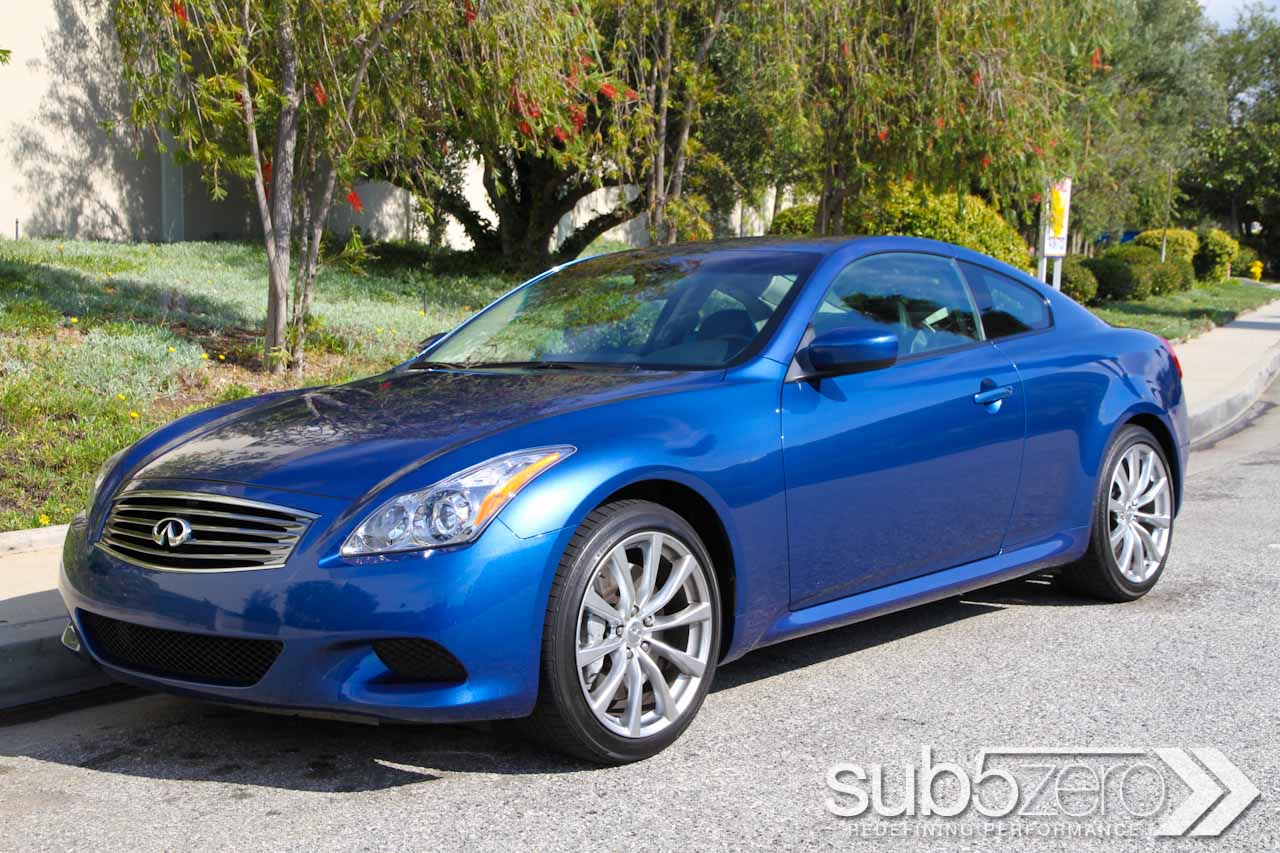 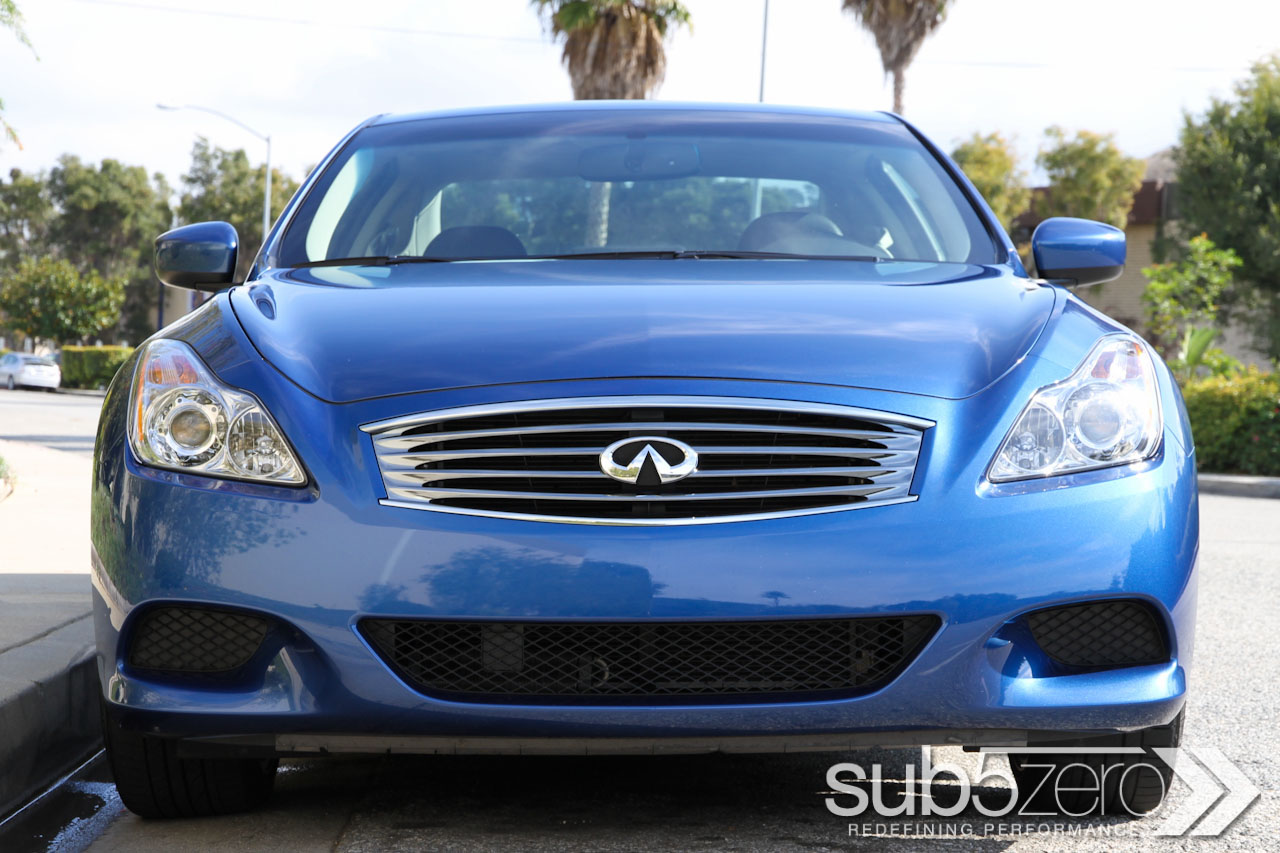 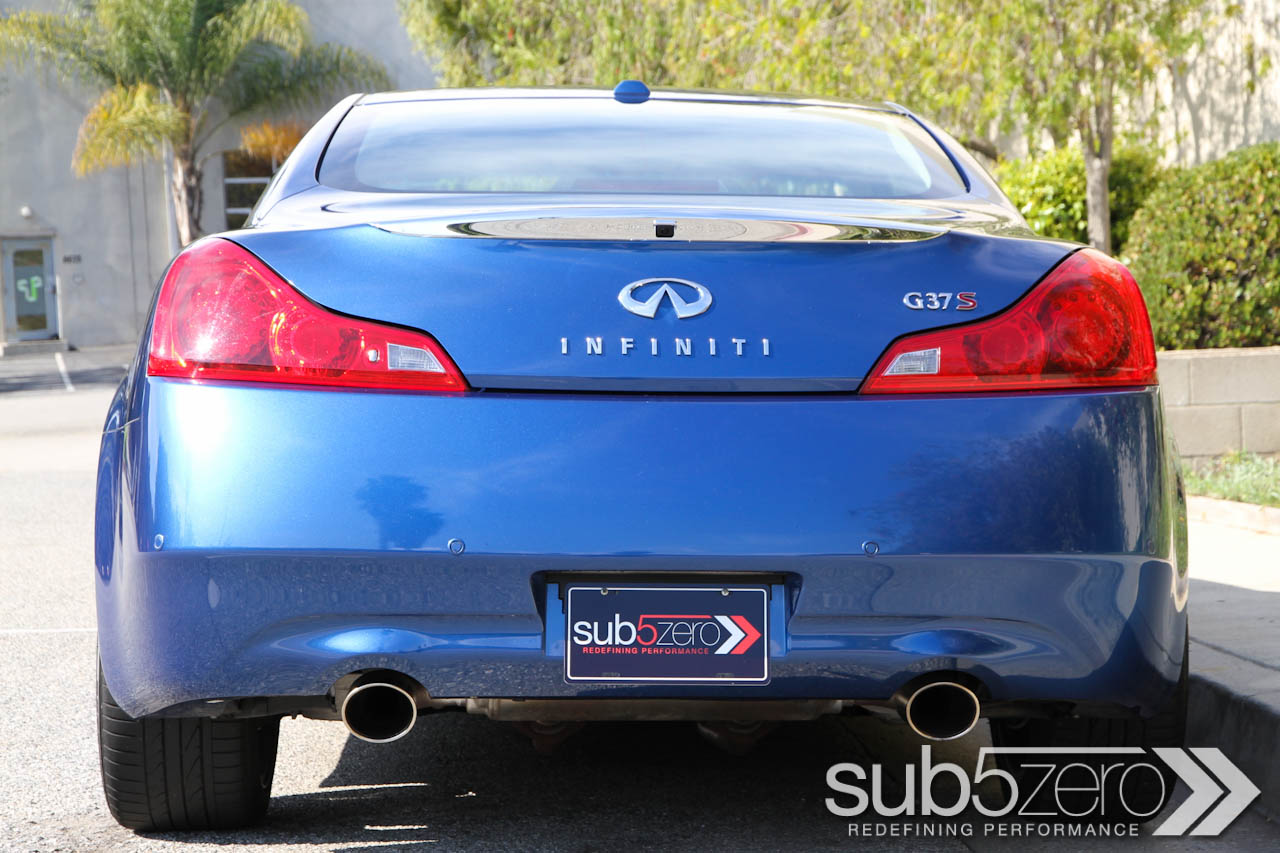 For 2010, Infiniti made several minor cosmetic updates to the front and rear fascias. The L-shaped Xenon headlights are now more angular and aggresive. Building on the long wave-style hood, raked windshield and wide stance that give the car its aggressive build, the changes are basically some nice makeup on a model that's already pretty sexy. The G37 Coupe has a chiseled look with smooth curves offset by strategic creases in the sheet-metal that accentuate its sleek lines such as the side sills which flow into the wheel wells. The vibrant luster of the Athens Blue paint gives the car a rich vibe with a glossy and almost wet look. Overall, the G37 walks a perfect line between a tough, muscular sports car and a refined luxury cruiser. 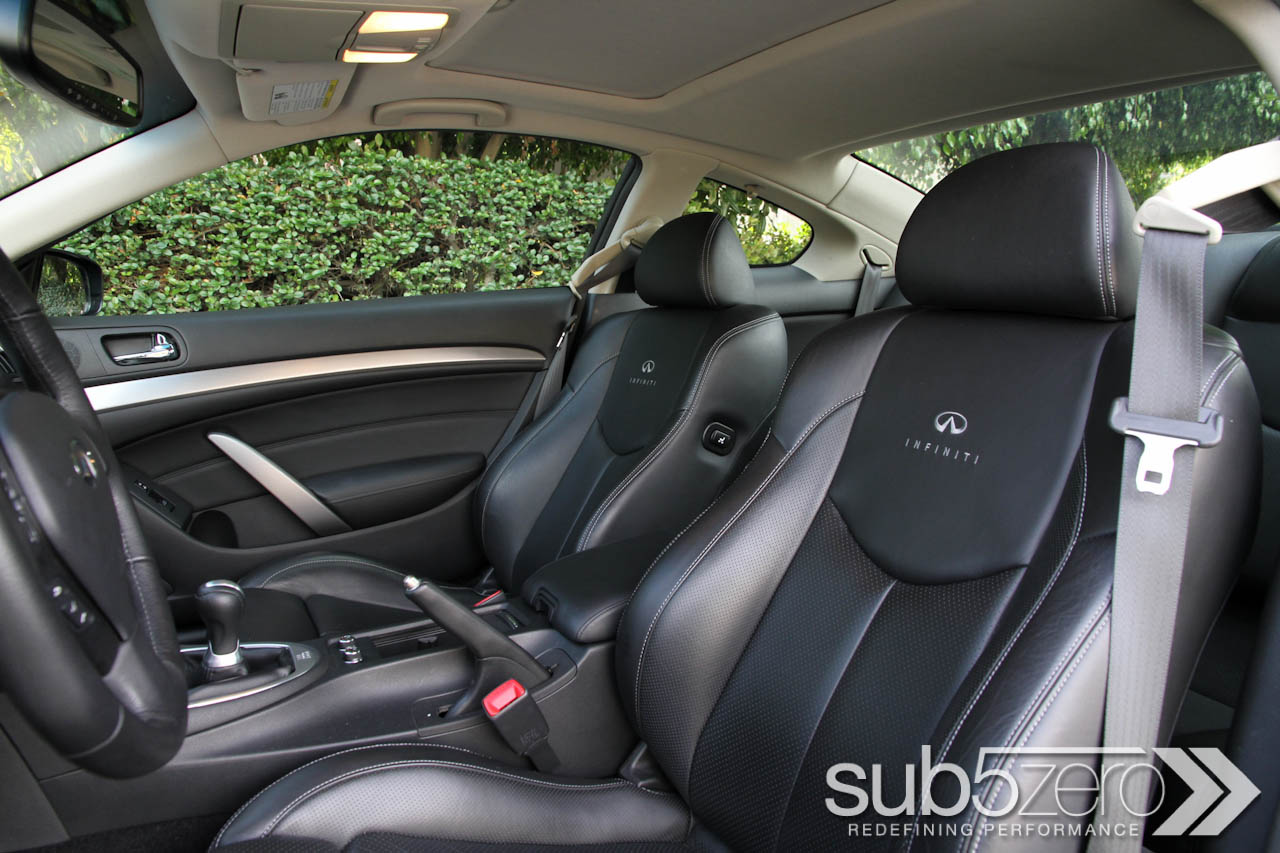 The cabin of the G37 Coupe does a fine job of exuding both its luxury aspirations and its sporting nature. The seats in the 6MT offer 10-way power adjustments for the driver (8-variations for the passenger side) and are mounted lower in the vehicle than the sedan for a racier feel. The seating surface is firm but has enough give to make long journeys a breeze and the slide-out manual thigh extension, coupled with the power torso and thigh support bolstering switches, ensure that virtually every facet of seating posture can be customized. The same level of comfort won’t be enjoyed by those forced to sit in the back seat but the experience is still fine for short trips unless you’re taller than average (which would necessitate some serious contortionist maneuvers). The majority of the interior is swathed in high quality leather including the shift knob, steering wheel and parking brake level. The aluminum pedals and foot rest are a nice touch and a further reminder that this is a driver's car. 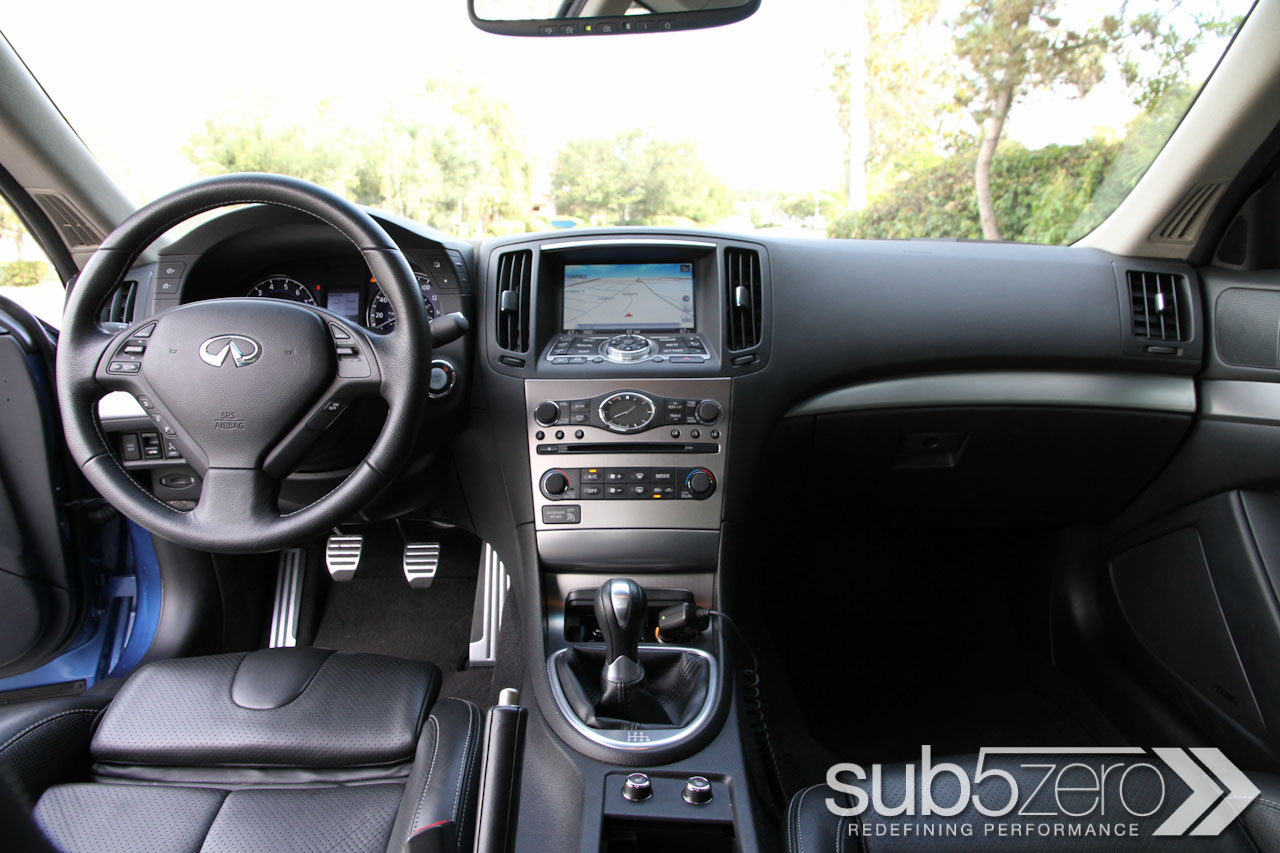 We were extremely impressed with the level of technical wizardry available in the G37S and even more impressed with the form and function. Keyless entry, push-button start/stop, power moon-roof with tilt and sliding sunshade and a 7-inch touch screen come standard. Stepping up to the Journey model adds auto on/off headlights, bluetooth hands-free phone, a rear-view camera and dual-zone automatic climate control along with a USB port. Our model, the G37 Sport 6MT, includes all of these as well as a rear sonar system and 11-speaker Bose audio system.

As cool and luxurious as all of these are, however, it's really the Navigation package where Infiniti hits a home run. This $1850 option provides a hard drive-based mapping system including lane guidance and 3D graphics as well as real time traffic and weather by way of the XM Satellite radio. There is even a Zagat-sourced restaurant guide. The navigation system is incredibly easy to use and can be operated by touch-screen, physical knobs and dials or by voice, which also holds true for the car's audio and information system. The graphics are some of the best we've seen and the traffic information display and re-routing function is a huge boon to commuters in large congested cities like our very own LA. 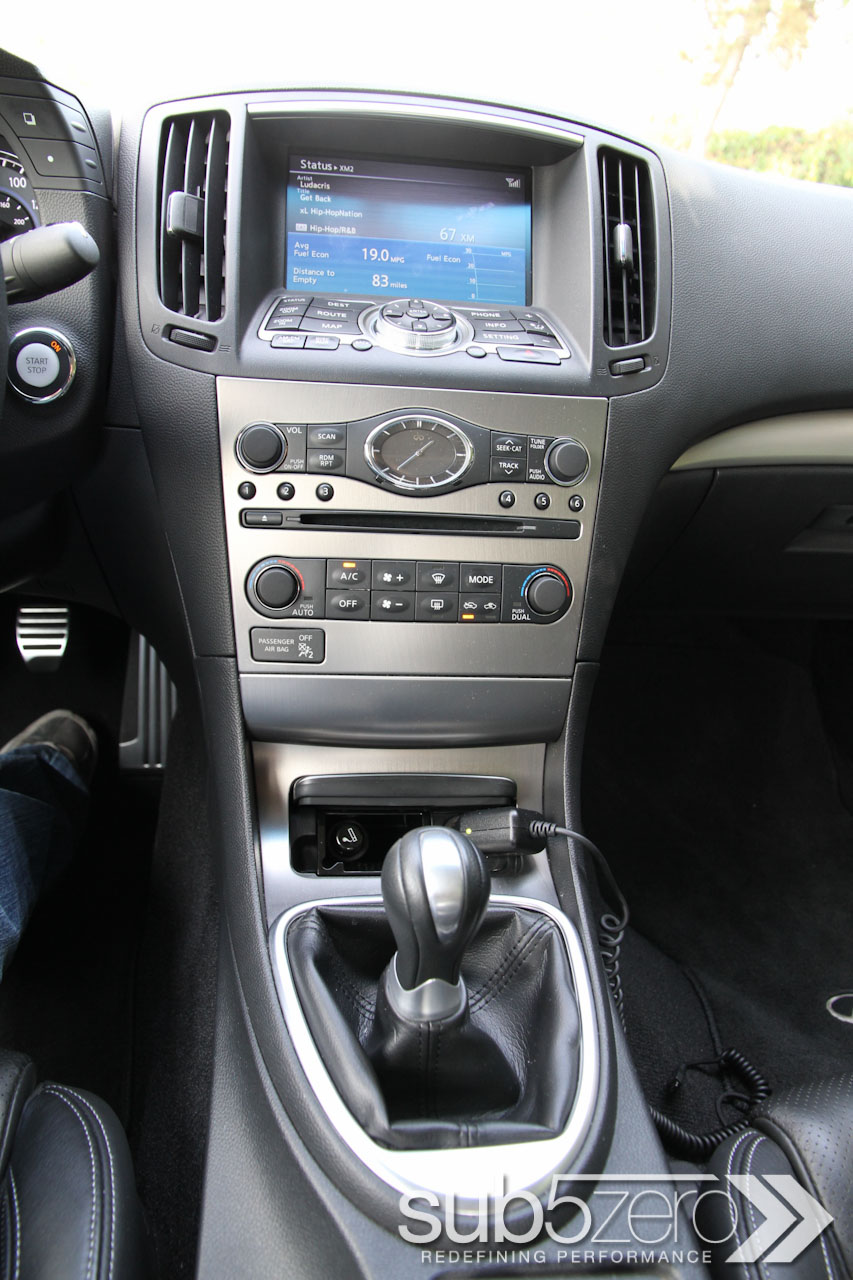 The problem with many of these types of systems is that they preclude an intuitive understanding of how to maneuver the often overwhelming number of options available. At first glance, the almost flush-mounted control center for the G37 looks like a disaster. You might think that short drivers won’t be able to see it at all and average folks will have to fumble around (a bit like those boxes at the Health Museum we had to stick our hands in as kids to "feel" different sensations). Ok, I digress, but the interesting phenomenon here is that this control pad is actually super easy to use and once you memorize the order of the buttons (which doesn't take any cognitive effort, just kind of happens), working the controls while driving is much less distracting than it is with most other systems. 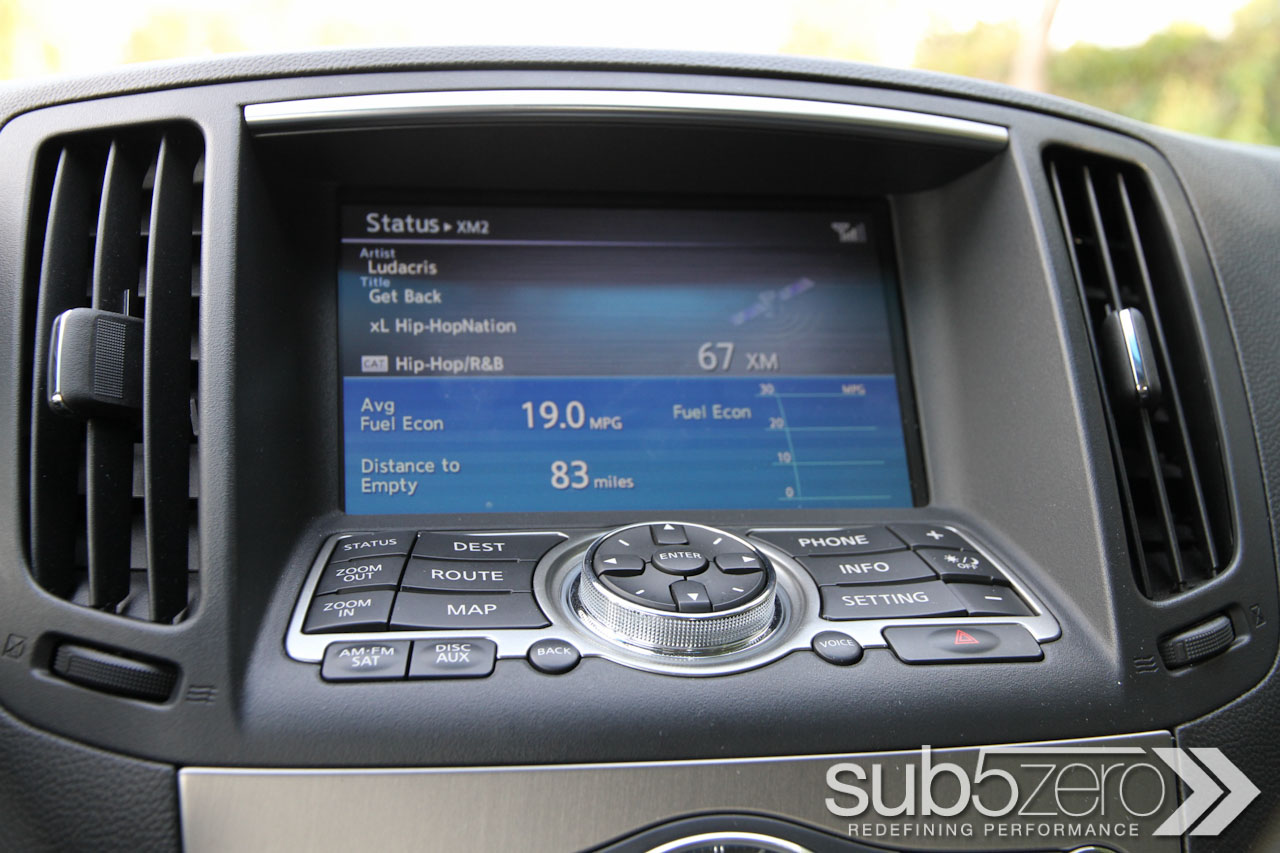 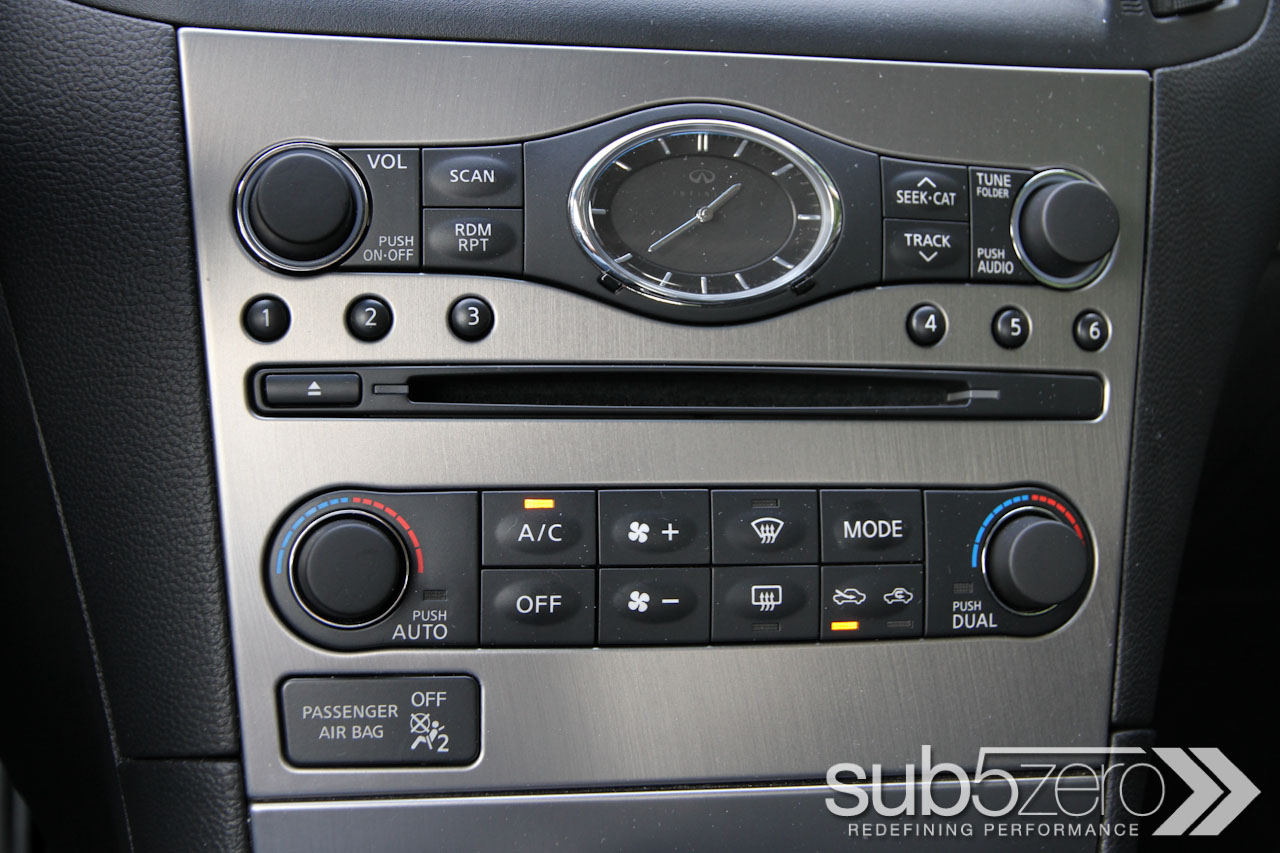 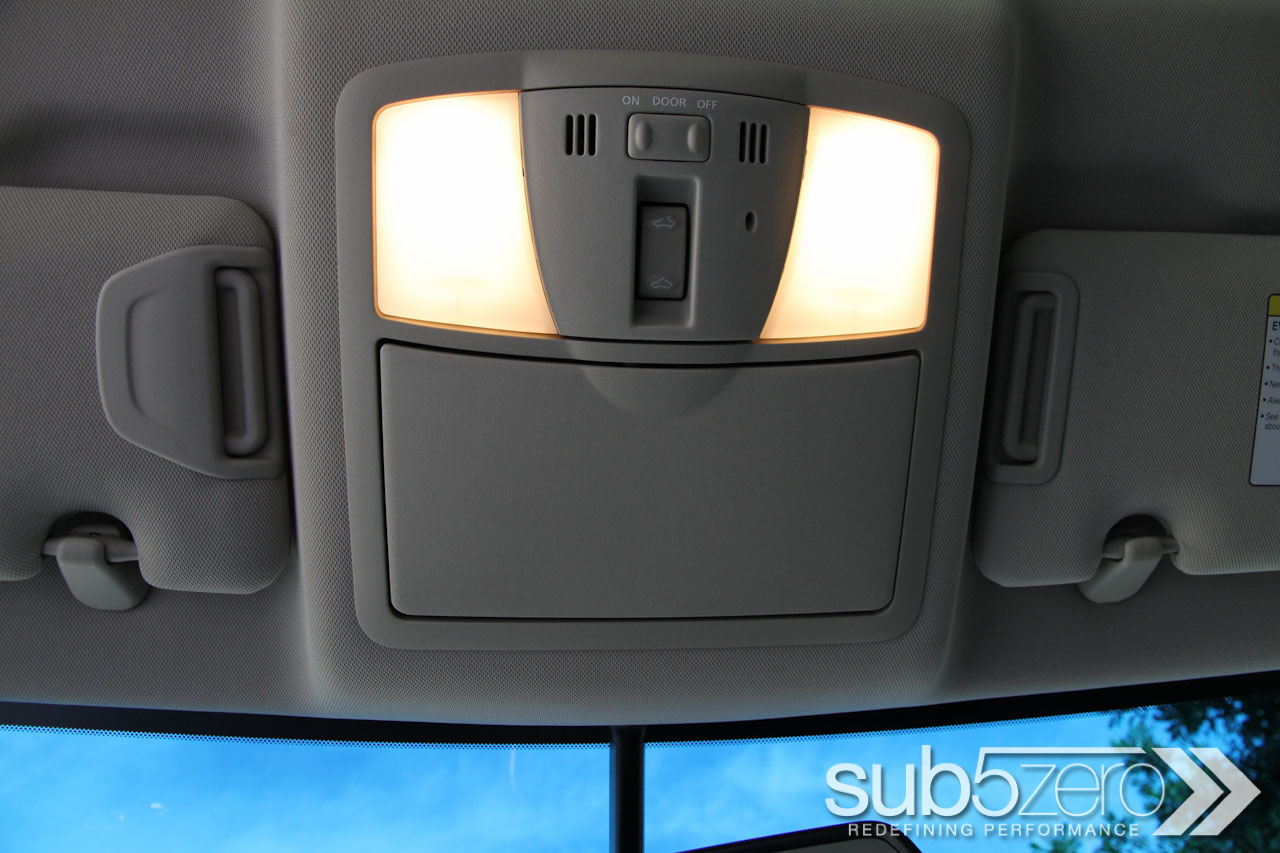 When you throw in the 9.3GB music box hard drive and the DVD player, matched up with the powerful and compelling Bose speakers (with 10-inch woofers), you have the makings of an awesome audio/video setup. And streaming music via Bluetooth audio is amazing. I connected it to my Android phone and had Rhapsody and Pandora pumping out tunes in short order. On the downside, the pairing functionality could be a little more seamless and there is a distinct order that has to be followed; the display on the touch-screen only shows Play and Pause while in this mode, with no artist or song info displayed; and the Play and Pause never seem to match up to the current state of the player on the phone. But, ultimately, the capability to wirelessly stream music is an amazing plus.

Overall, the fit and finish is rock solid. The leather accoutrements are wrapped well and expertly stitched. The only real detraction from the cabin is the Shodo Aluminum trim, which, for some mysterious reason (at least to me) is highly regarded. It appears cheap and, since it makes up the majority of the center stack, takes away from the otherwise very luxurious vibe. Maybe it's supposed to be sporty but it seems neither racing-inspired nor rich. 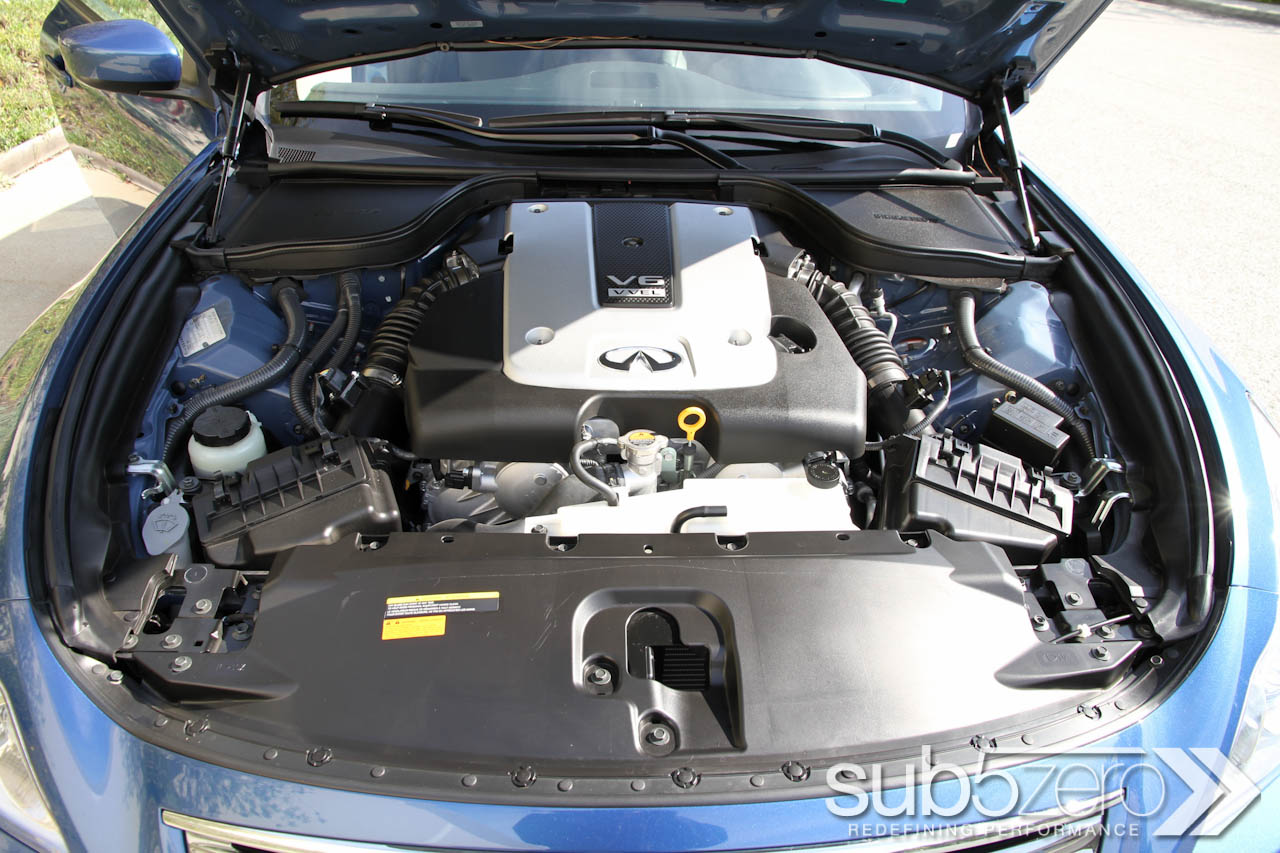 The 3.7-liter V6 engine serves up 330 horsepower and 270 lb-ft of torque and makes for impressive acceleration up to its 7500 RPM rev limit. Like its Nissan 370Z cousin, the engine is high-revving but emits some particularly coarse noises at high RPMs. The car tips the scales at 3,653 pounds but still manages a respective sprint from 0-60 mph in 5.4 seconds. The G37 benefits from Nissan's VVEL (Variable Valve Event and Lift) technology which eliminates the need for a conventional throttle butterfly and flattens the torque curve at both the top and bottom of the RPM range. 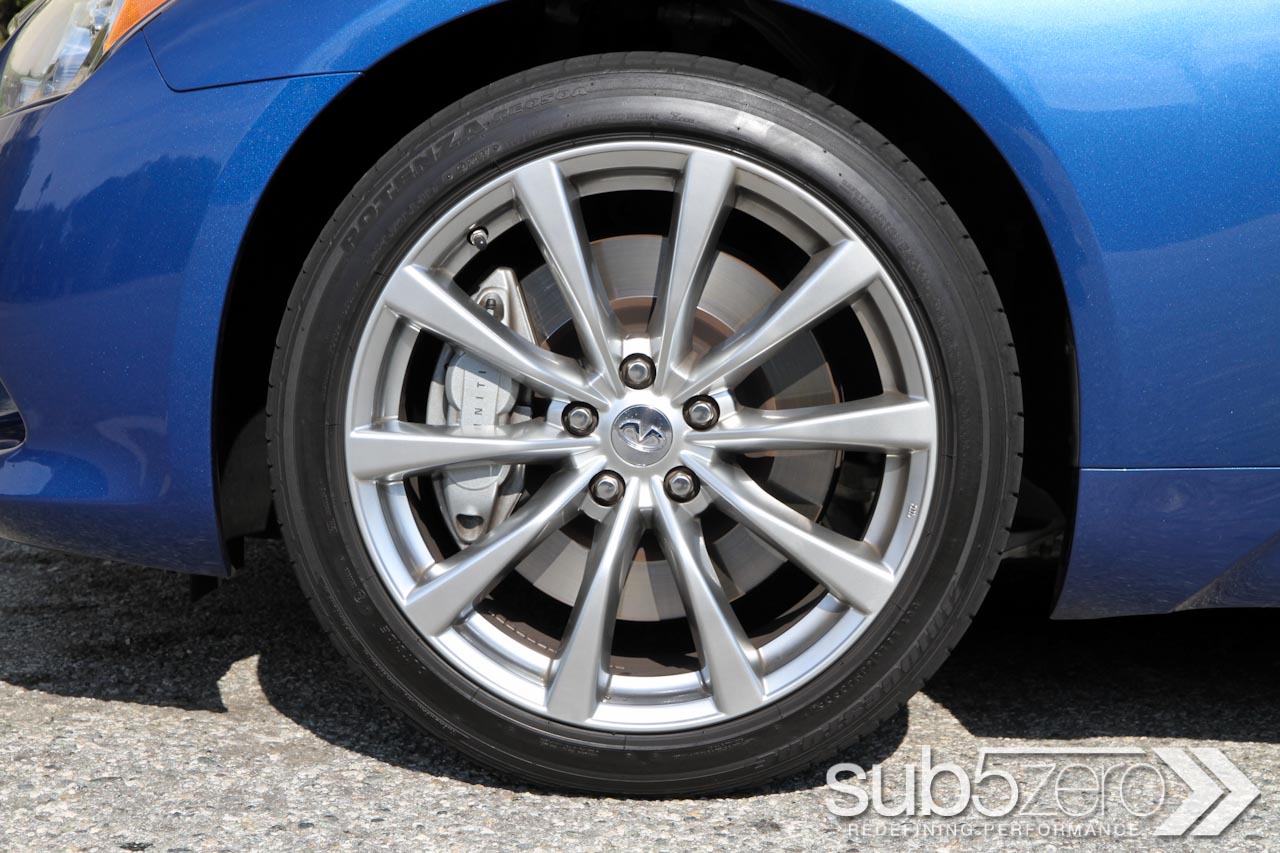 Stopping power is effortless and fade free by way of sport brakes with 4-piston front calipers with 14-inch rotors and 2-piston rear calipers with 13.8-inch rotors. These sit inside 10-spoke, 19 x 8.5-inch aluminum-alloy wheels in front and 19 x 9.0-inch wheels of the same ilk in the rear. And in turn, these are wrapped with W-rated Bridgestone Potenza summer performance tires measuring 225/45R19 in front and 245/40R19 in back.

The only real sore spot here is the transmission which is difficult to smooth out in 1st and 2nd and a tad notchy. It just isn’t quite as silky as the gearboxes found in the BMW 335i, Acura TL or Audi A5. We had a similar experience with the Nissan 370Z, which makes sense since it's based on the same underlying mechanics. 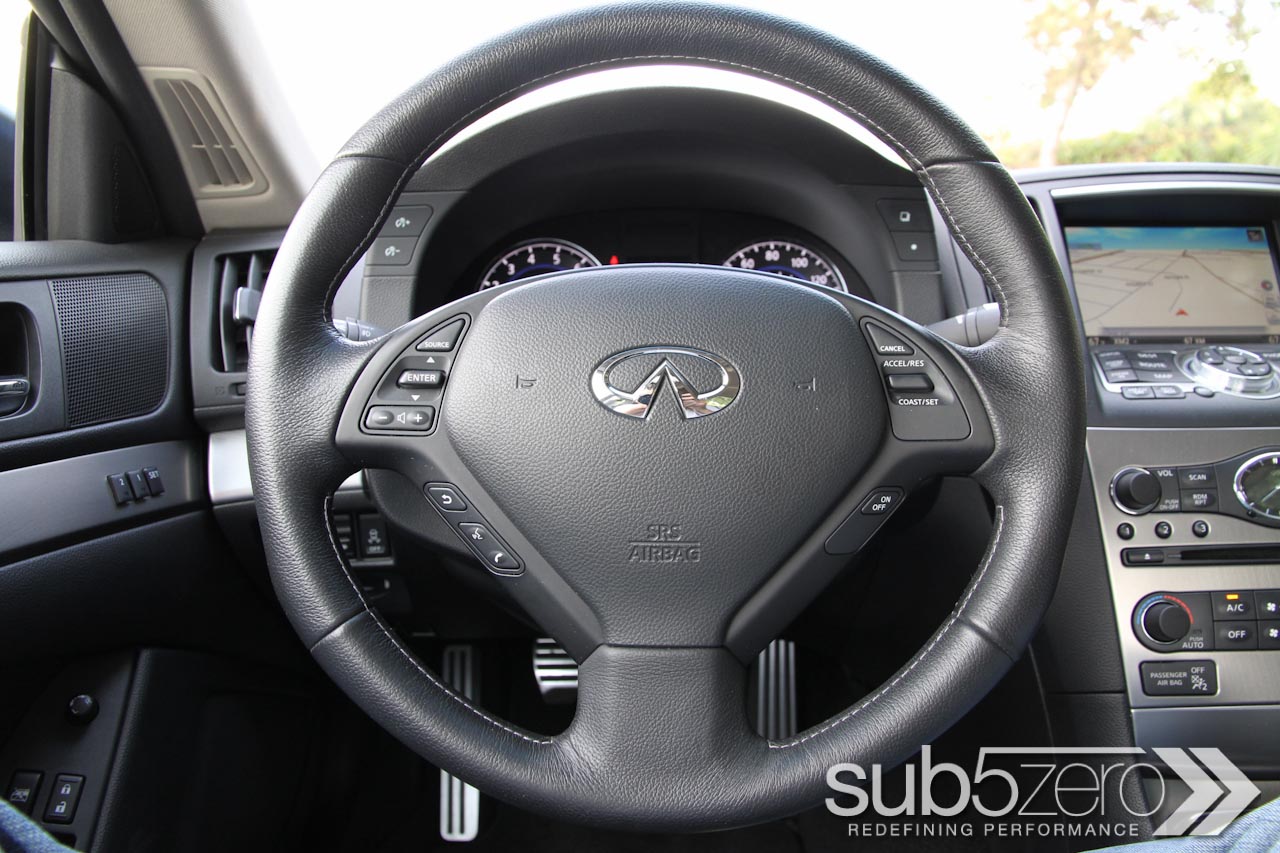 The G37S is a cool customer under extreme conditions and takes corners with precision and just a tad of oversteer. It has a tight double-wishbone suspension up front and multi-link setup in rear that is stiff yet totally comfortable for daily driving, eating up crappy pavement and uneven roadways without jarring the passengers. And at speed there is plenty of much-needed feedback to the steering wheel. The only real shortcoming is the viscous limited slip diff that is slow and somewhat unpredictable compared to other vehicles in this space, including even the much less expensive Hyundai Genenis Coupe. It does effectively eliminate inside wheelspin that plagues many vehicles, but doesn't really shine. 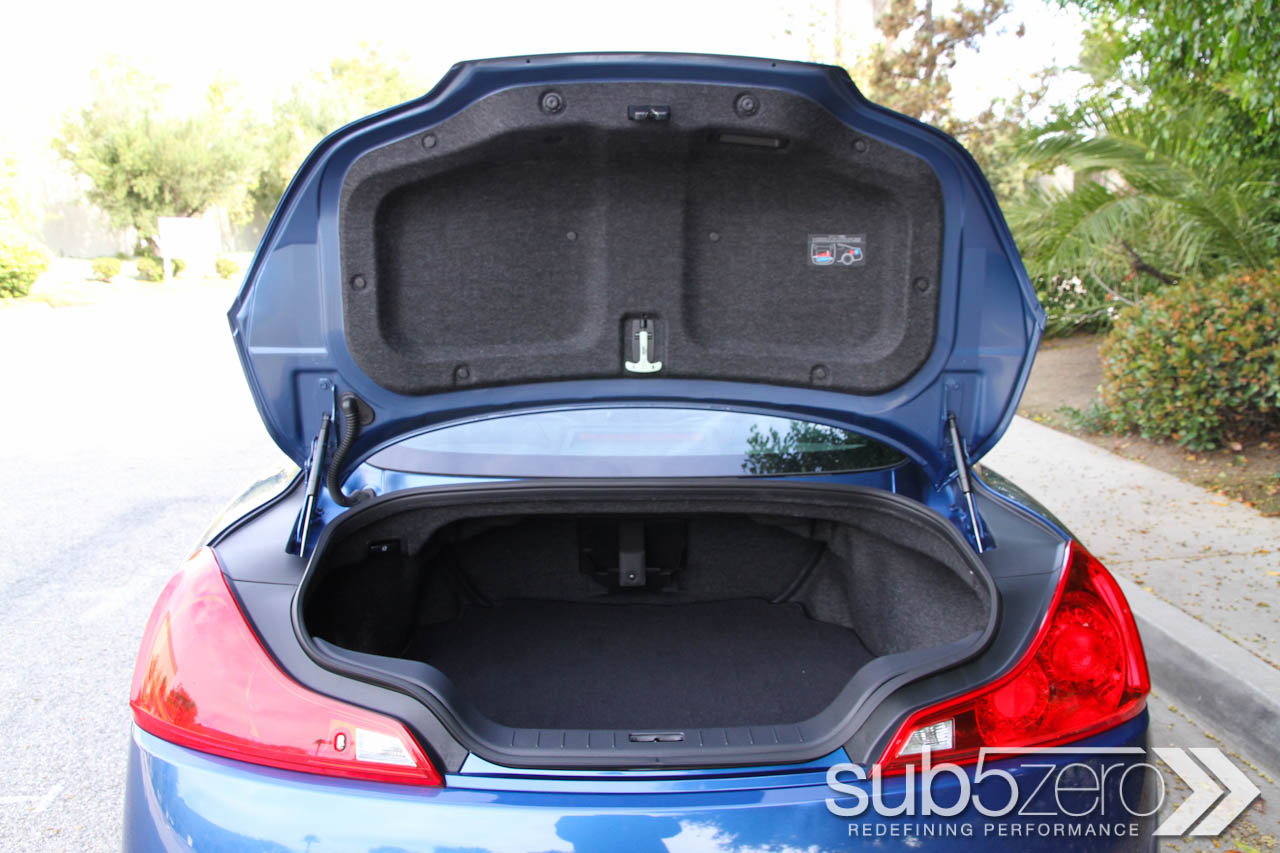 Whereas the 2010 Nissan 370Z (the car the G37 is based on) has one of the least amounts of space we've ever come across in a mass-market vehicle, the G37 Coupe actually has a semi-proper trunk with 7.4 cubic feet of space. If you need more room, the rear seats do fold down which is a nice option.

Stability control, traction control, ABS, dual-stage front-seat side airbags and full-length roof-mounted side curtain airbags come standard along with active head restraints, a slide-away brake pedal assembly and a tire pressure monitoring system. If you pony up the $1150 for the Technology Package you are rewarded with Intelligent cruise control that uses lasers to maintain an appropriate distance from other vehicles ahead and will pre-pressurize the brakes if the system senses that a sudden stopping situation is imminent. It won't actually apply the brakes but puts the car on high alert. In addition, the cruise-control system can pre-tension the seat belts if an impending crash is detected. 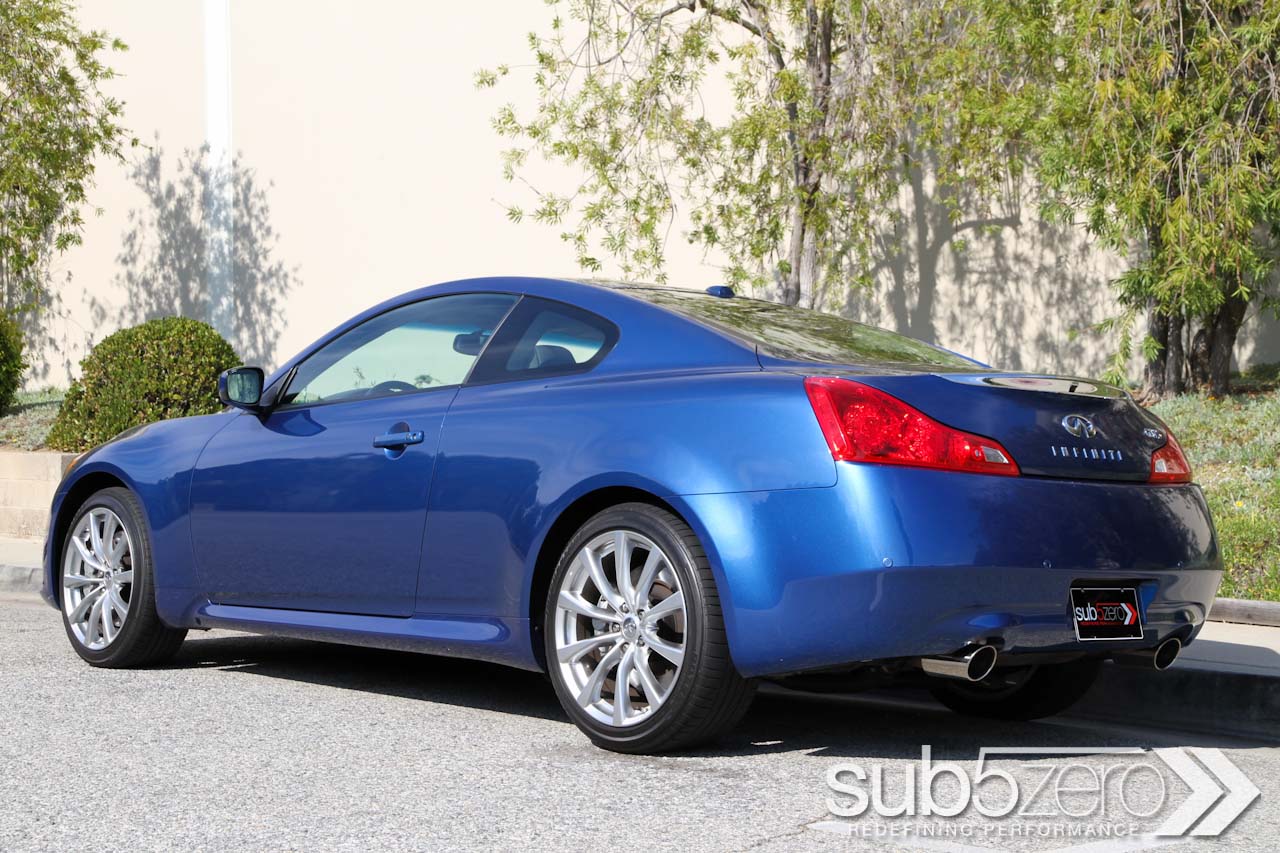 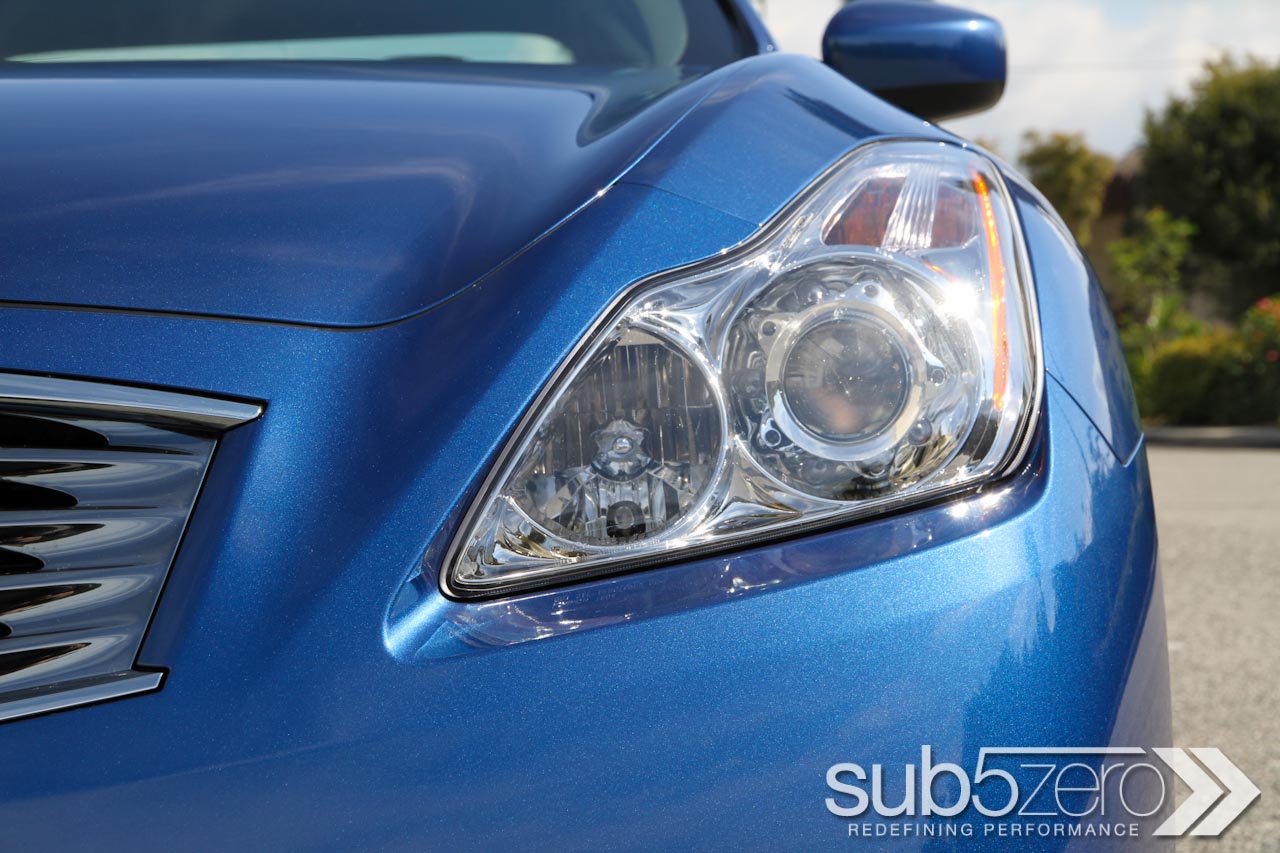 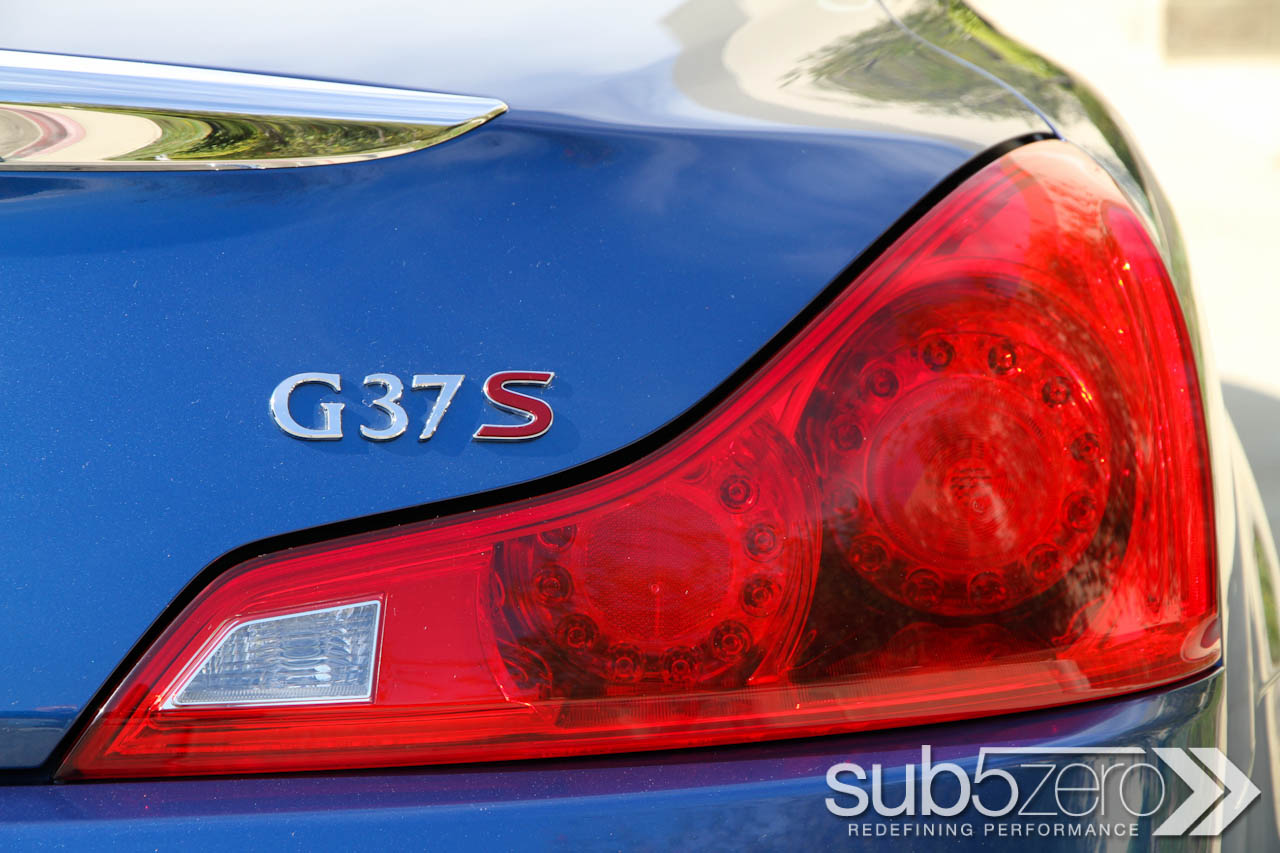 The Infiniti G Coupe has been re-worked and tweaked over the last few years and the result for 2010 is a car that has few faults and stacks up quite well against the competition. The combination of raw power, smooth lines, rear-wheel drive, serious handling chops, solid fit and finish, high-tech options and affordability makes it one of the best options in its class. For $43,115 you get a car that makes few sacrifices and offers the excitement and luxury of vehicles costing much more with enough character to stay relevant for years to come.