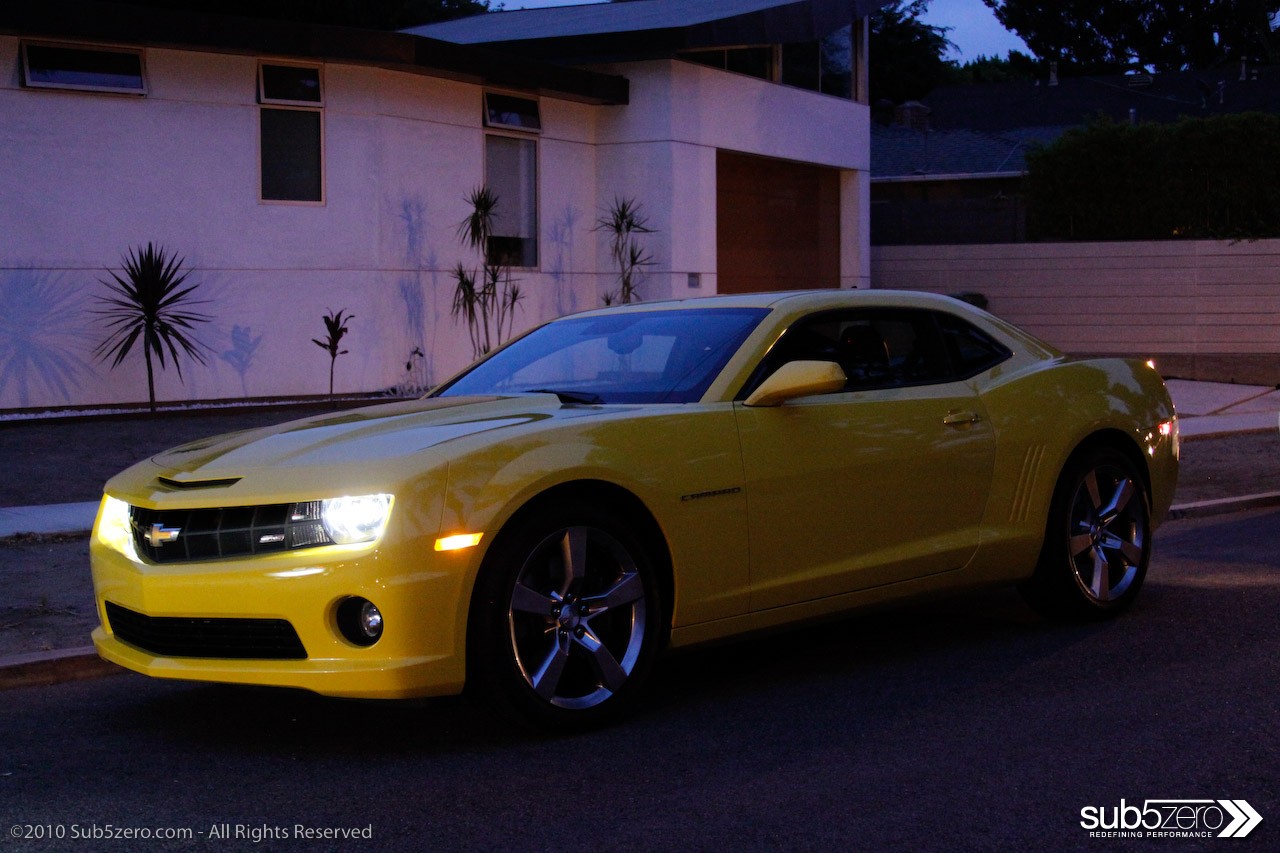 What stands out in a crowd, likes to make lots of noise and doesn’t require its operator to have a working relationship with rocket science? Why that would be the new 2010 Chevy Camaro SS. After being teased in concept form starting in 2006, and making appearances in several Transformer movies (ok, like 2,) the 5th generation muscle car from the General hit the market in the spring of 2009 as as 2010 model. Thankfully, the concept styling has been left mostly intact without turning the Camaro into a vehicle that’s more concept than car.

I’m going to cut right to the chase — the 2010 Chevy Camaro is a true rock star. Let the love fest begin… The American muscle car scene has been stuck in a rut of mediocrity most of the last decade, but of late, there has been a resurgence of inspiration. With the latest reincarnations of the Mustang, Camaro and Challenger the landscape has changed considerably. There was a time when comfort was thrown out the window, cornering ability disregarded and reliability an afterthought. Now, you get all of these with same breakneck speed of old. That said, the Camaro has seemed to emerge as the true champion of the people. Participants at last year’s SEMA Show were wowed as the Camaro stole the show. We didn’t really know what to think until just recently when we got the opportunity to put the car through its paces and officially enter the fan club. 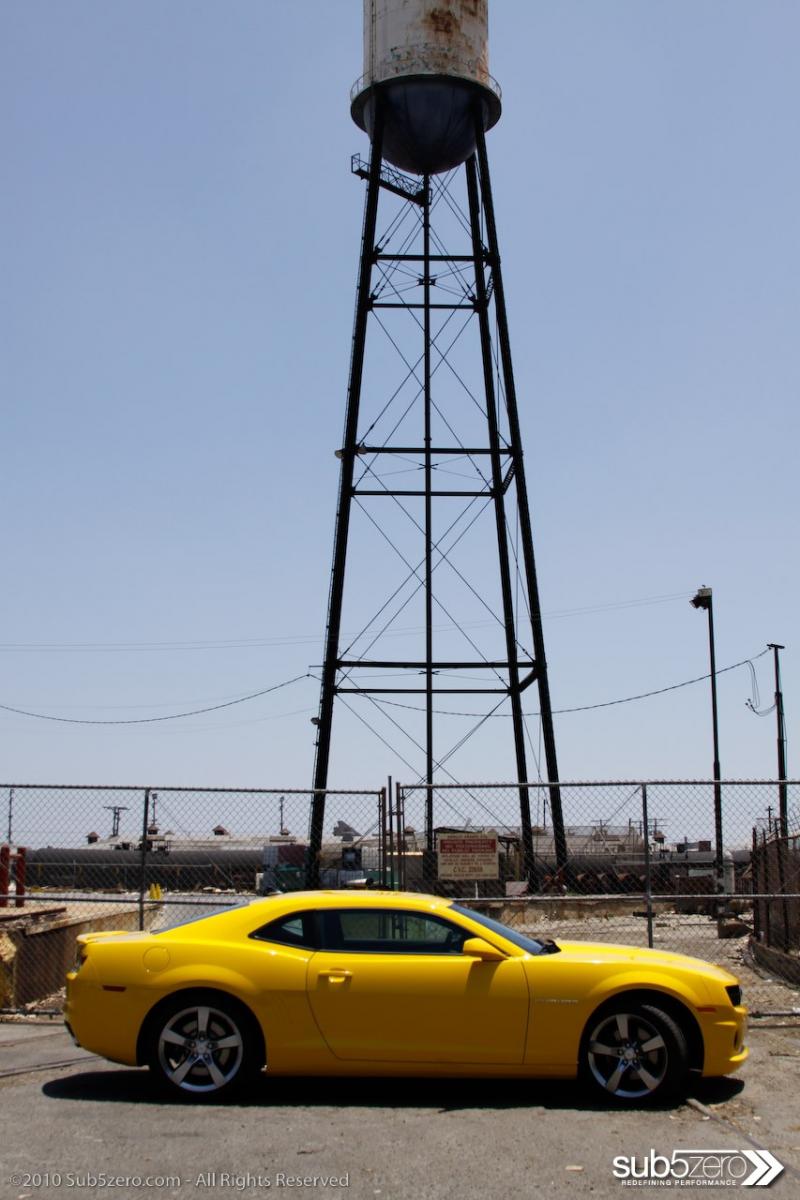 The retro-themed styling delivers aesthetic cues from the 1969 Camaro but presents a thoroughly modern vibe. The designers were loose enough when carving out the Camaro that they managed to pull off a vintage look without getting stuck in the past like the Challenger. The car features a chopped top, long nose and short tail that seem to be all the rage these days. The reverse mohawk running across the roofline gives a nod to its bigger brother, the Chevy Corvette.

The strong flared fenders with the crisp side creases running front to rear give the car a very chiseled look. The mirrors continue this motif with an abbreviated and angular container sitting on contoured stems that still provide enough surface to work. My only knock is that some of the styling is more form than function (did I just go against my ‘more car than concept’ argument?). The hood bulge is still cool even though the engine fits perfectly well, but the lack of a true hood scoop and side sills that are nothing more than bent metal is slightly disappointing. It would be nice to see some air pass through into the wheel wells. 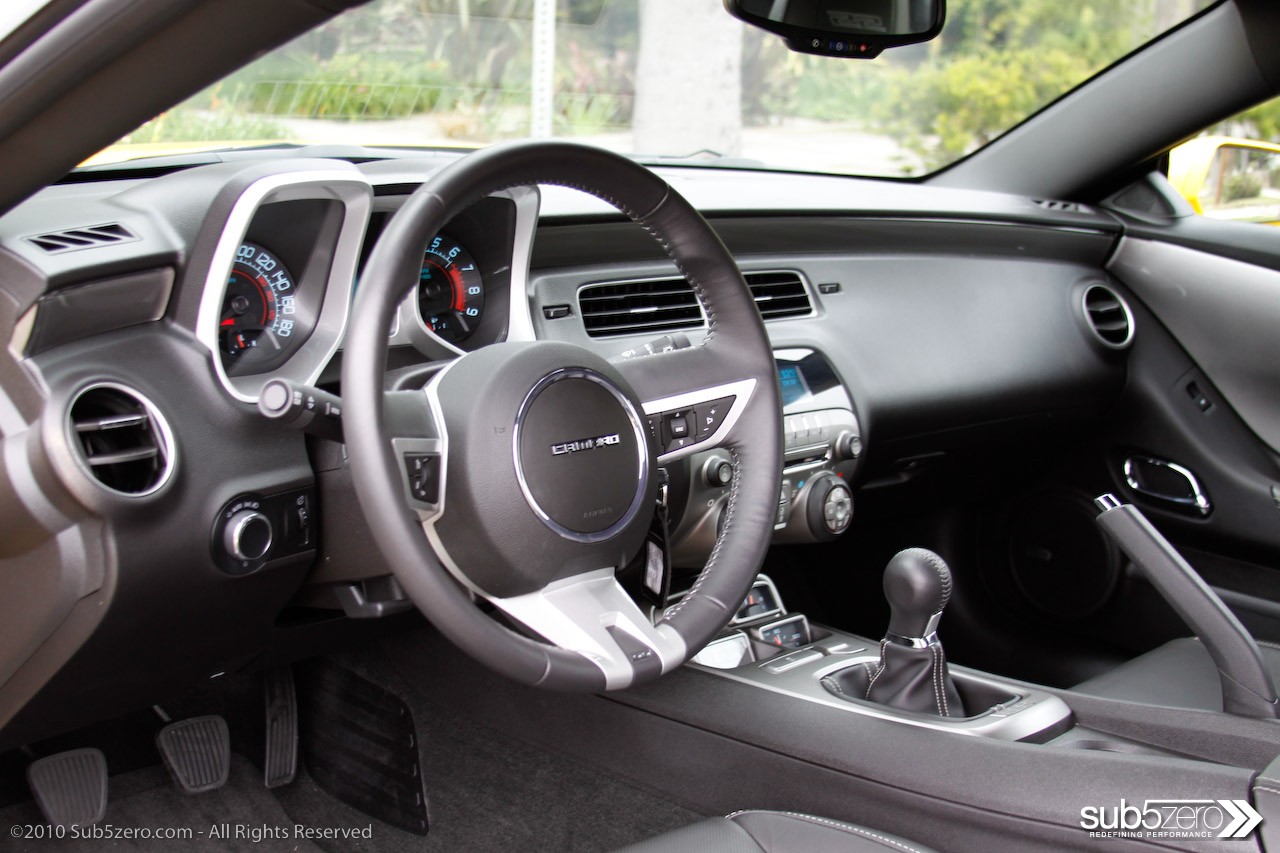 Suffice it to say, the inside of the Camaro SS doesn’t necessarily wow as much as the outside of the car, but it is unique and escapes much of the blandness which has become commonplace for muscle cars today. The leather-appointed bucket seats are comfortable and have enough side bolstering for throwing the car sideways. The gauge package goes old-school with squared off encasing, wrapped in silver trim, sandwiching a small multi-use TFT screen in the middle which can serve as everything from a trip meter to a shift notifier to a digital speedometer.

The Boston Acoustic sound system sits like a king above the center stack and has easy controls delivering more than enough juice to 9 speakers throughout the car. A better subwoofer would be nice but the existing thumper is still more than adequate. Just below are the climate controls which seem a bit whimsical with their oversized knobs. In between is the hazard light switch and door lock controls, which can be disorienting for those used to the armrest location. 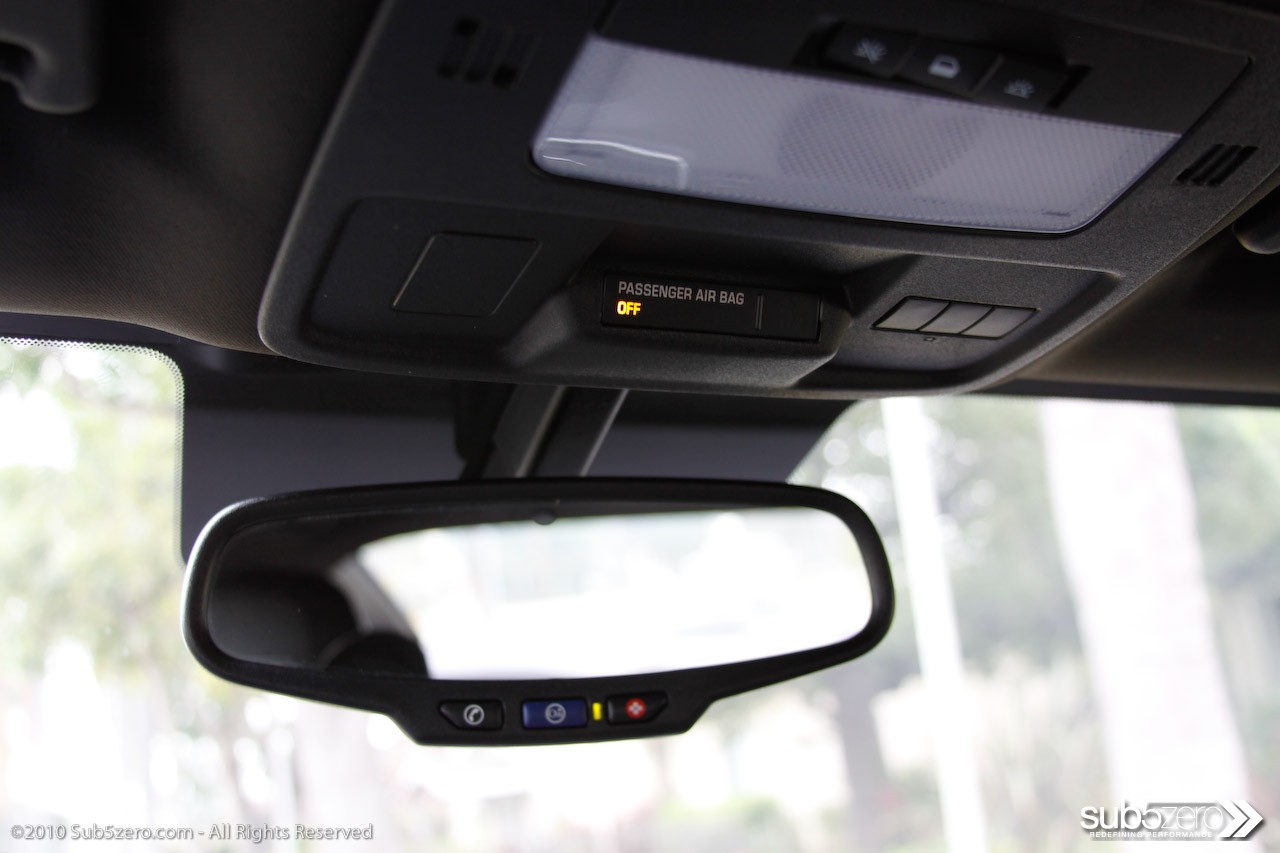 Our test vehicle featured the optional four-gauge package which has readouts for voltage, transmission fluid temperature, oil pressure and oil temperature. The location is questionable, hunkered down below the dash, and the presentation a little over the top, but it’s a nice touch nevertheless and makes a definitive statement as to the performance aspirations of the car. More gauges always = more power. 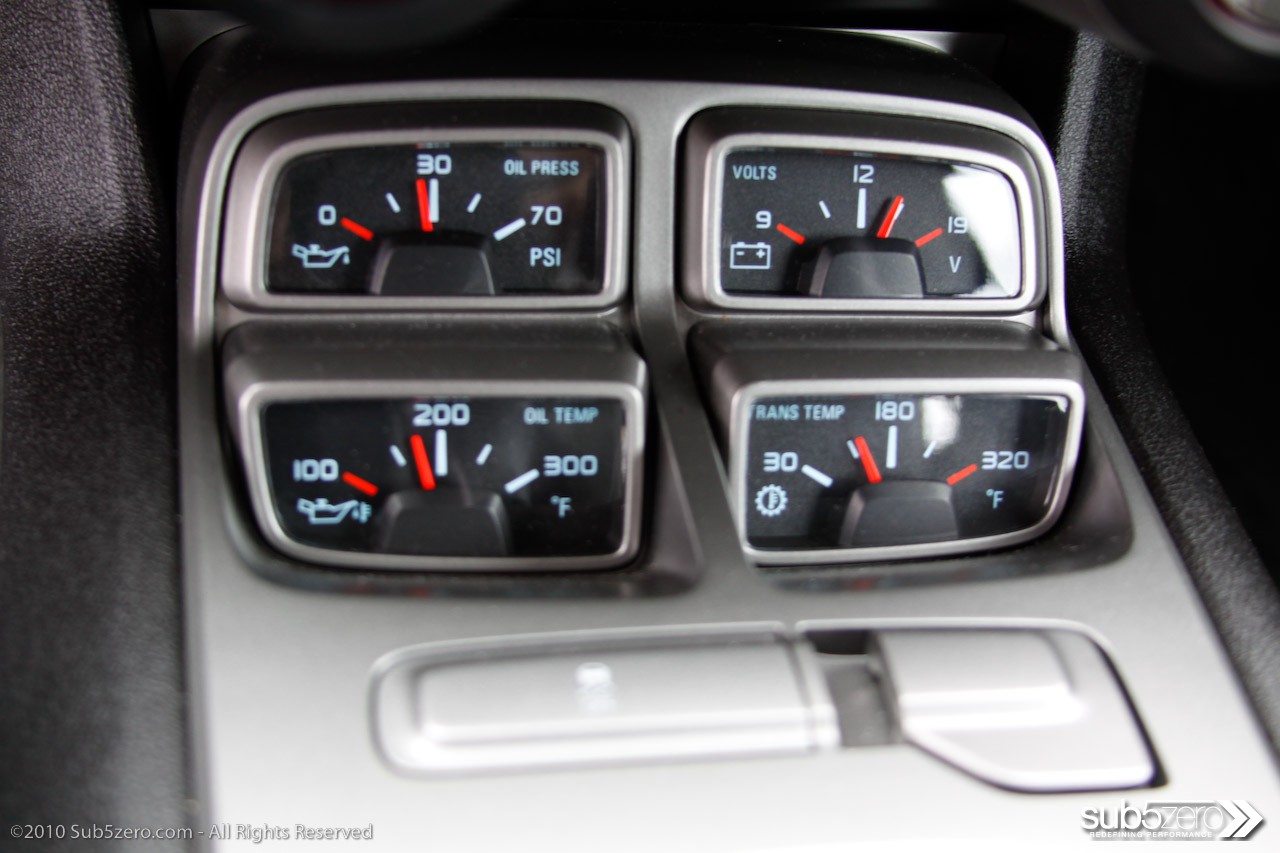 There are four seats in the car, but those in the rear are basically reserved for little people or odds and ends. The sloping roofline limits the headroom but two medium size adults could, if no other option presented itself, sit there.

The Camaro has several nice touches that should be noted. The first is that there is a strip of silver trim that runs along the upper section of the dash across the entire length where it meets with larger silver accents pieces on the sides of the doors. Visually, this does a nice job of breaking up the interior which consists mainly of a huge expanse of black plastic. To spice things up even further, at night there is a soft blue light that emanates from the top of this strip. And the electric blue lighting offset with red markers creates a cool cabin look in the dark. 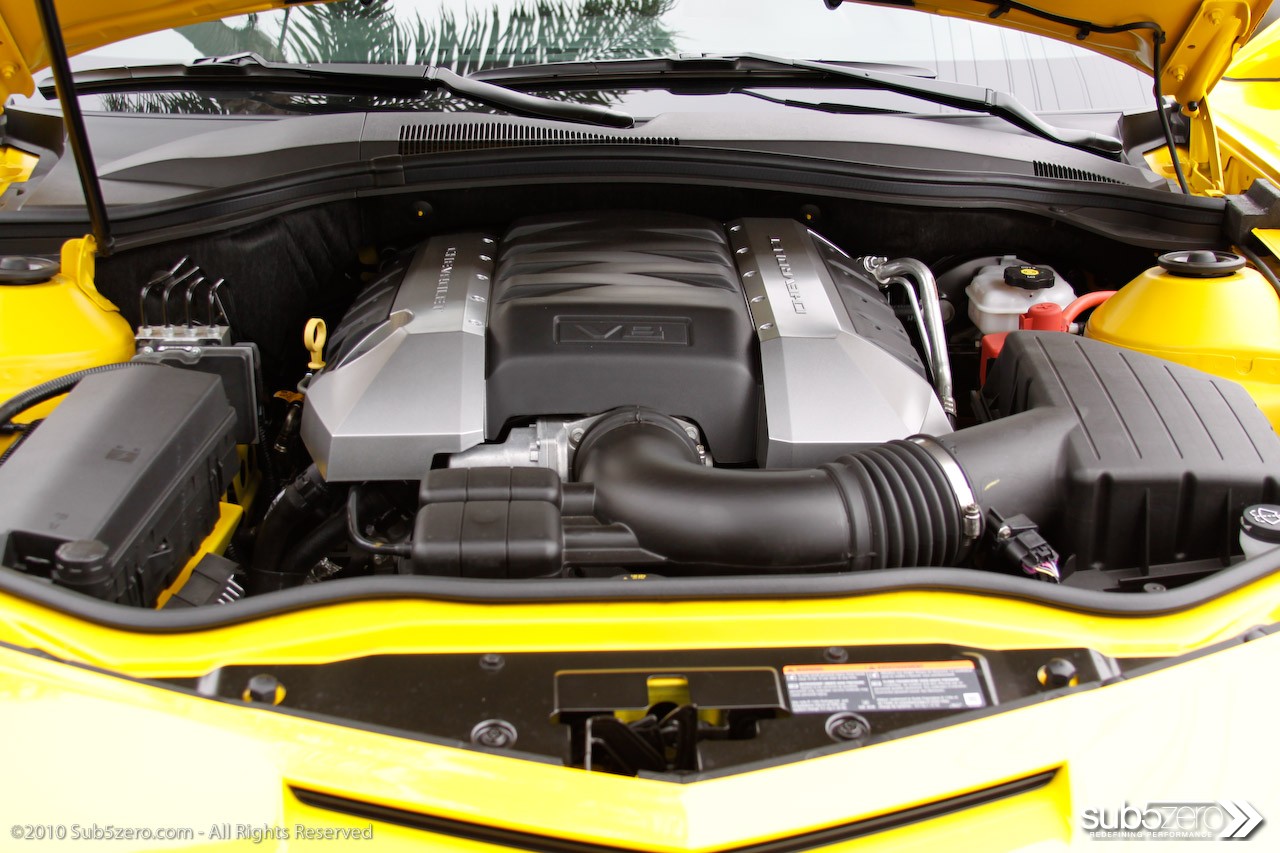 GM went best case scenario when they decided to use the LS3 engine from the Chevy Corvette as the powerplant, with praise heralded from the mountaintops. The fuel-injected 6.2-liter V8 cranks out 426 hp and 420 pounds of twist when mated with the Tremec TR6060 manual gearbox, which is quite precise and serves up quick shifts. If you opt for the automatic version, you’ll still get a 6.2-liter V8 engine, but it will be the L99 which sports lower-compression and lower-revs which means output goes down a bit to 400hp with 410 lb-ft of torque.

Turning on the Camaro SS immediately invokes a loud rumble, the gauges jump alive from end to end and the car has a nice shimmy like the muscle cars of old. Put your foot on the gas and the car roars ahead, pushing all 3,849 pounds forward with seemingly wanton disregard for fossil fuel conservation. Actually, the Camaro does quite well with 16 mpg in the city and 24 mpg on the highway (the automatic gets 25 mpg and some nifty cylinder deactivation magic). But if you drive it like you stole it (or are doing a test drive) expect less. By way of the car’s own calculations we got about 14.6 mpg around town. 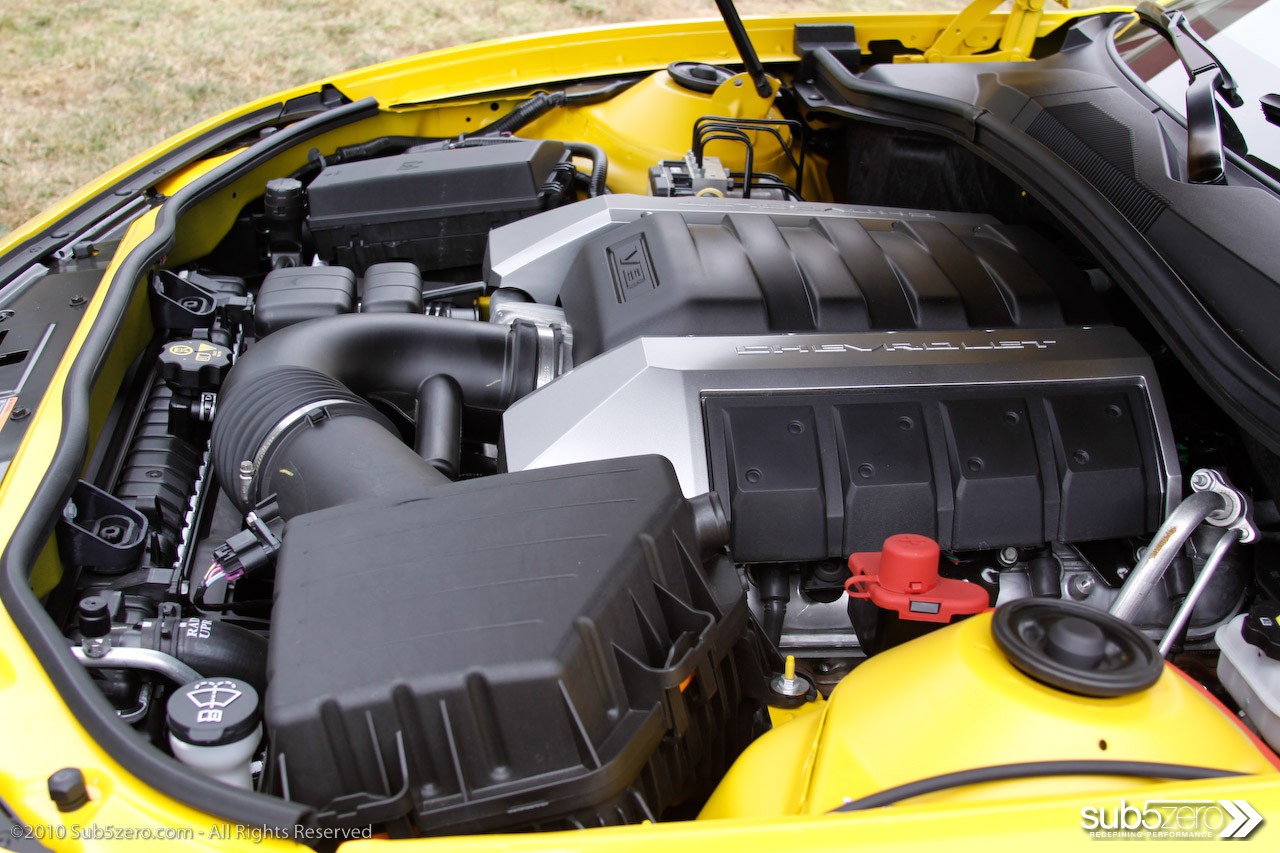 Acceleration from 0 to 60 mph comes quickly at 5 seconds flat with several more tenths shaved off for a rolling start. There is a launch control feature that’s activated by tapping the traction/stability control button twice to move into Competitive mode. Then, all you need to do is press in the clutch, floor the gas pedal, dump the clutch and pray. The truth is that turning everything off and just doing it yourself works just as well. The car hooks up nicely on the Pirelli P-Zero summer performance tires measuring 245/45ZR20 up front and 275/40ZR20 in the rear. If you live in a part of the country that has inclement weather for part of the year, best to spring for a set of top-notch snow tires. 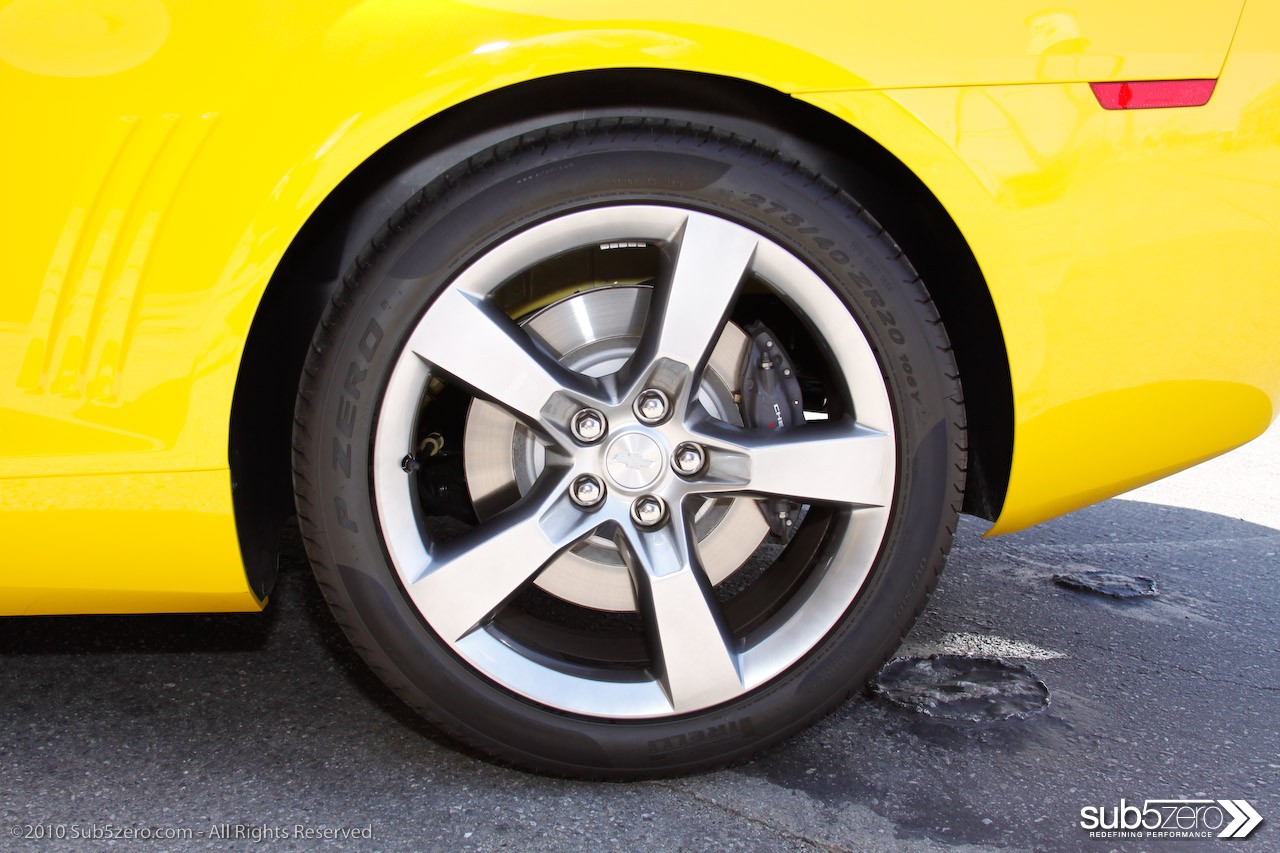 The challenge with the Camaro SS is overcoming the heft of the vehicle. Maneuvering the car around takes some getting used to as it drives “big”. Part of it has to do with the actual weight of the car and part with the visibility from inside. The short side glass, steep windshield and long raised hood diminish confidence and mute the actual quickness of the car. There is also a tendency to overestimate the size of the car and drive accordingly. The fact that the steering wheel is a bit on the large side doesn’t help either.

The Camaro SS is a vehicle that automatically has the respect of its driver but still needs to gain his/her trust. Diving into turns at speed takes a bit of blind faith and maneuvering the car is sometimes counterintuitive. But the limited-slip differential is excellent at handling all of the torque unleashed when exiting corners. With time and experience, many of the initial quirks seem to fade away, apprehension dissipates and driving becomes an absolute joy.

The 2010 Camaro is built on a reworked variation of the Zetta platform familiar in the States as the base for the Pontiac G8, whose roots are actually found in the Holden Commodore out of Australia. This shortened version features a multi-link independent rear suspension that is actually pretty phenomenal. All SS models also feature some suspension tuning. The result is a car that tracks well and is both balanced and composed when pushed hard. Stopping comes by way of four-piston Brembo calipers grabbing on 14-inch brake discs, providing more than enough power to effectively slow down this brute. Standing on the brakes brings the car down effortlessly and in a controlled manner. 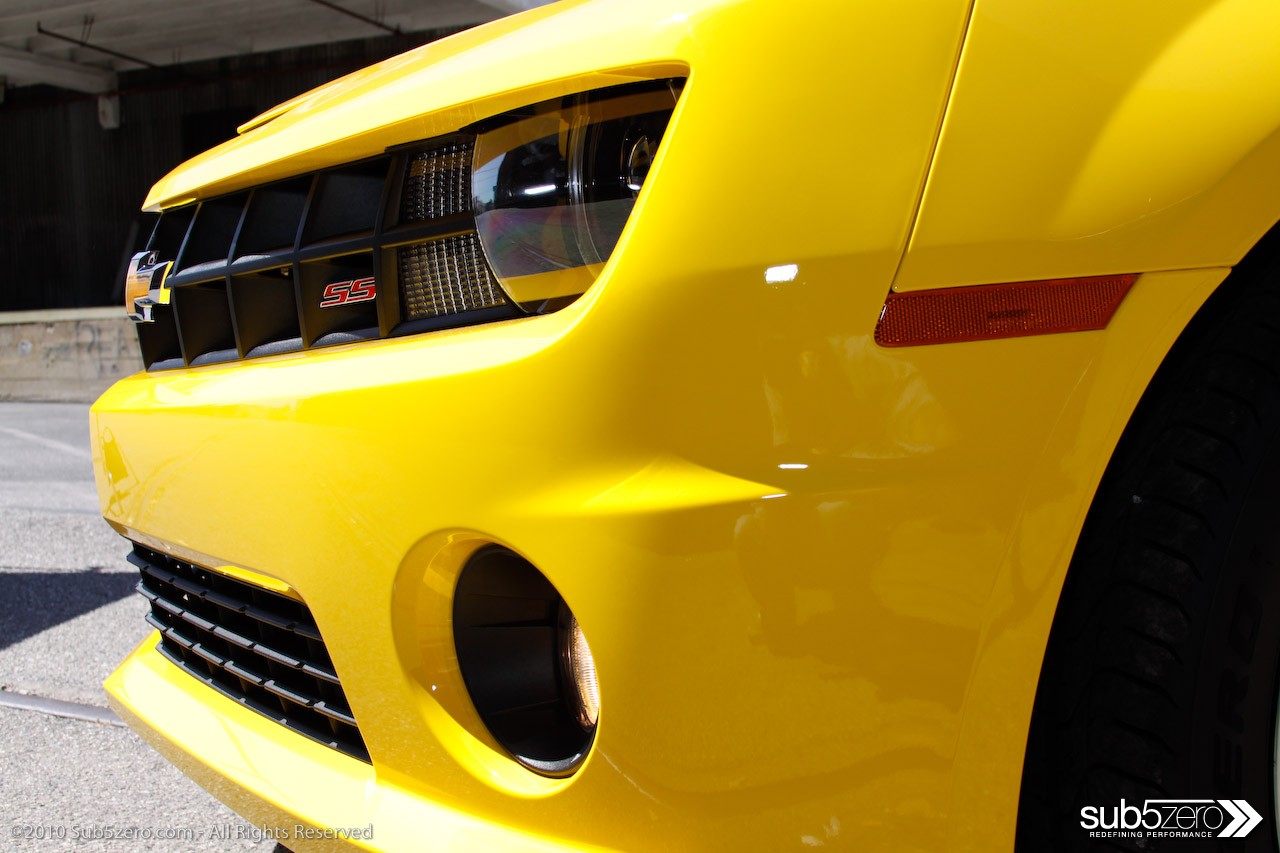 With all of the performance chops, the Camaro SS also comes with a host of safety features to keep the occupants safe and sound. Antilock brakes, stability control, traction control, driver and passenger airbags, full-length side curtain airbags, tire pressure monitoring as well as OnStar Automatic Crash Response and Emergency Services comes standard. Rear parking assist is available for all models and standard on the LT 2LT and the SS 2SS.

The 2010 Chevy Camaro 2SS RS that we tested wasn’t perfect but it was damn close. Many of our gripes were pretty minor. The car has a tendency to get jittery over crappy asphalt due to the tight suspension and short sidewall of the 20-inch tires. The sun visors are so narrow that they are completely worthless. The steering wheel is too big and the deep dish manifestation is awkward at best. The turret style vantage point from the cockpit can be unnerving at first and going up and over hills downright scary to the uninitiated. The brake and accelerator pedals are too far apart for any type of heel-toe action. The lack of an in-dash navigation system is somewhat of a letdown but OnStar does offer turn-by-turn directions if you’re willing to listen. You can also question the quality of the interior materials or the ridiculously small opening of the trunk or the fact that this is an American muscle car built in Canada. 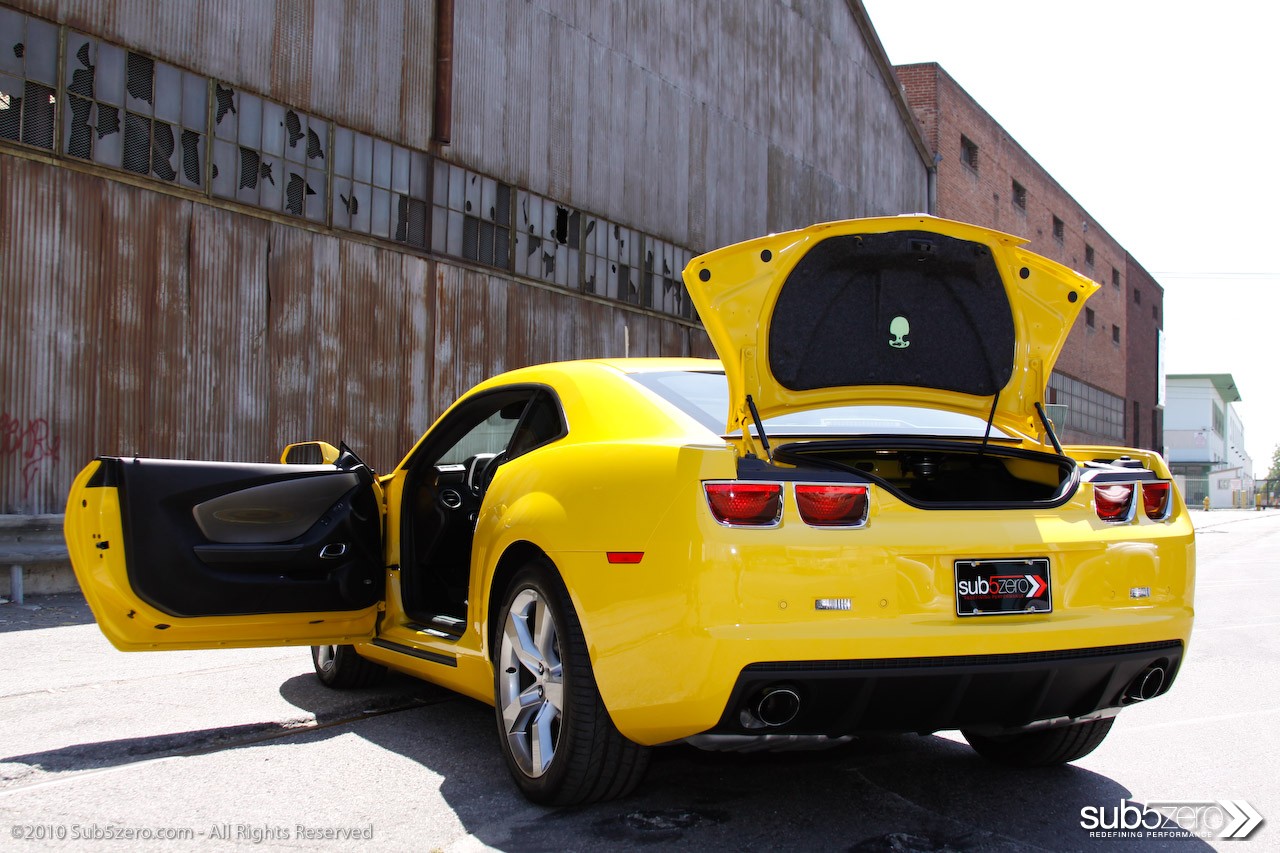 The point of this exercise has simply been to illustrate that you really have to reach to find anything fundamentally wrong with the Camaro. The truth is that the car is simply badass. It’s like a big, fun toy for grown-ups. Everything about it is a little garish and overstated, but in a playful way. When you’re in the Camaro you just feel good and you look good, two essentials of motoring. Everywhere I went someone had something to say about the car and the comments were all overwhelmingly positive. I heard things such as “I’d sell my soul for that car,” “Is that the stock exhaust?” and “Do you wax it yourself?” It’s hard to think of any other car on the market that delivers the visual allure, athletic performance and fun factor that the Camaro promises. We can’t wait until the supercharged Z28 (rumored) makes its debut in 2011!

Our fully loaded 2010 Chevy Camaro 2SS came with the optional RS package which adds 20″x8″ front and 20″x9″ rear wheels finished in midnight silver, body-color roof ditch molding, HID lamps with halo rings and RS styled tail lamps. The total MSRP is $35,995 including the destination charge. About the only thing our test vehicle didn’t have was a sunroof which is an additional $900 option. This is in line with the 2010 Mustang GT, but you get much more car for your dollar at a considerably lower price tag than fully loaded models like the Nissan 370Z or Dodge Challenge R/T which run closer to $40k……. My final advice to you is: Run, don’t walk, to the nearest dealership…. I think we may actually follow our own advice on this one…