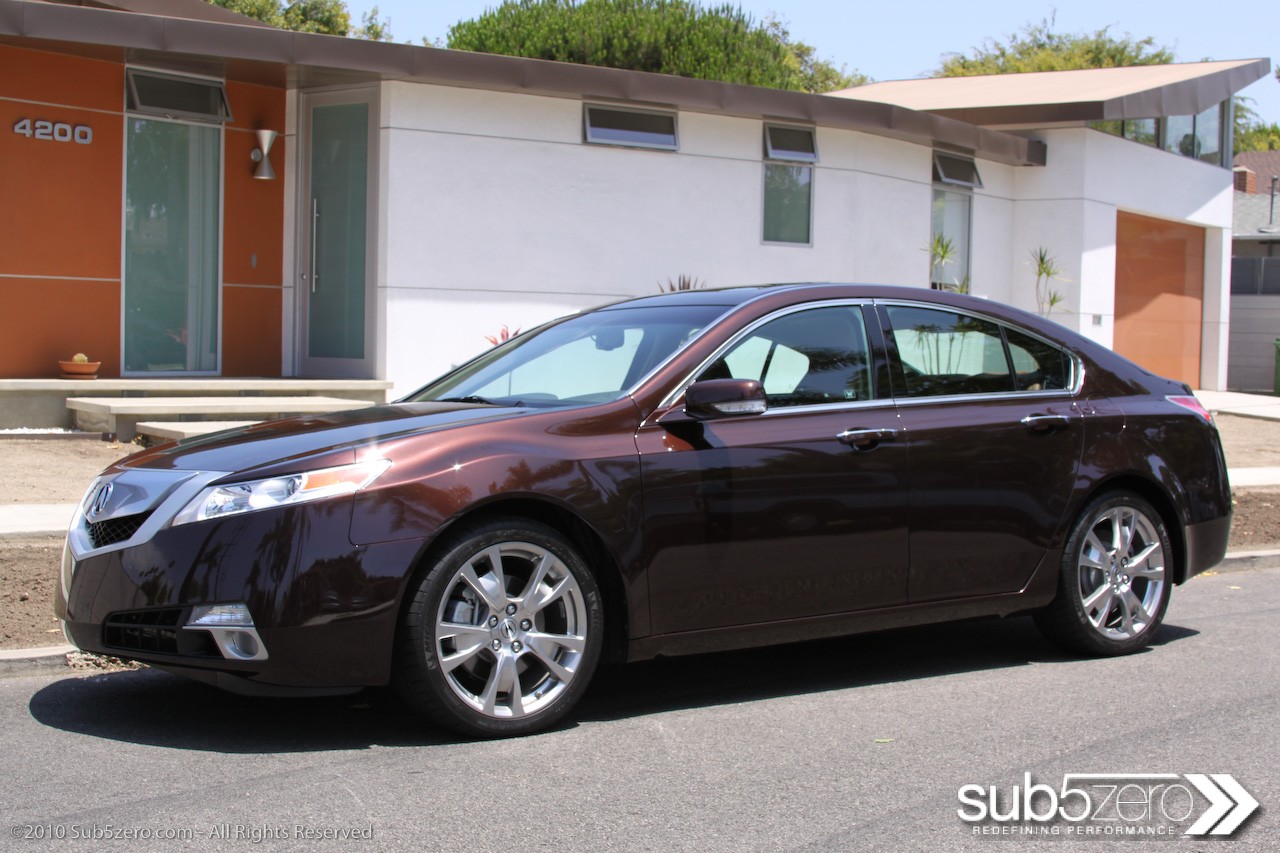 The third-generation Acura TL first debuted in 2008 and immediately came under heavy artillery fire from pundits of automotive aesthetics. The lines were clean and crisp but the grill was referred to as a "shield", "cheese grater", "plow" and so forth. The blinged out wedge shape design was something many folks couldn't seem to get past. We're all so critical these days and the controversial styling was like a homing device for naysayers. It's always safe to say you don't like something — it seems like you have a more discerning eye than everyone else. Throwing in a verb such as "like" leaves you vulnerable and suggests questionable taste, but I will go out on a limb here and give the new 2010 Acura TL a firm nod. The styling of the fascia is integrated particularly well with the rest of the car and is solidified with the V-shaped insert below the rear deck. And after all, as a general rule, we like it when car companies are willing to take risks.

When the newly redesigned Acura TL was released, the lack of a Type-S version as well as a manual transmission option also threw some of us for a loop. The company has rectified this with the introduction of the 2010 Acura TL SH-AWD with 6-speed manual. Including the Technology Package this car runs $44,195 which puts it in stiff competition for the luxury performance sedans under $60,000 category. So, how does a vehicle derived from the Honda Accord stack up with its German brethren? Surprisingly well, and with plenty of room left in the budget… 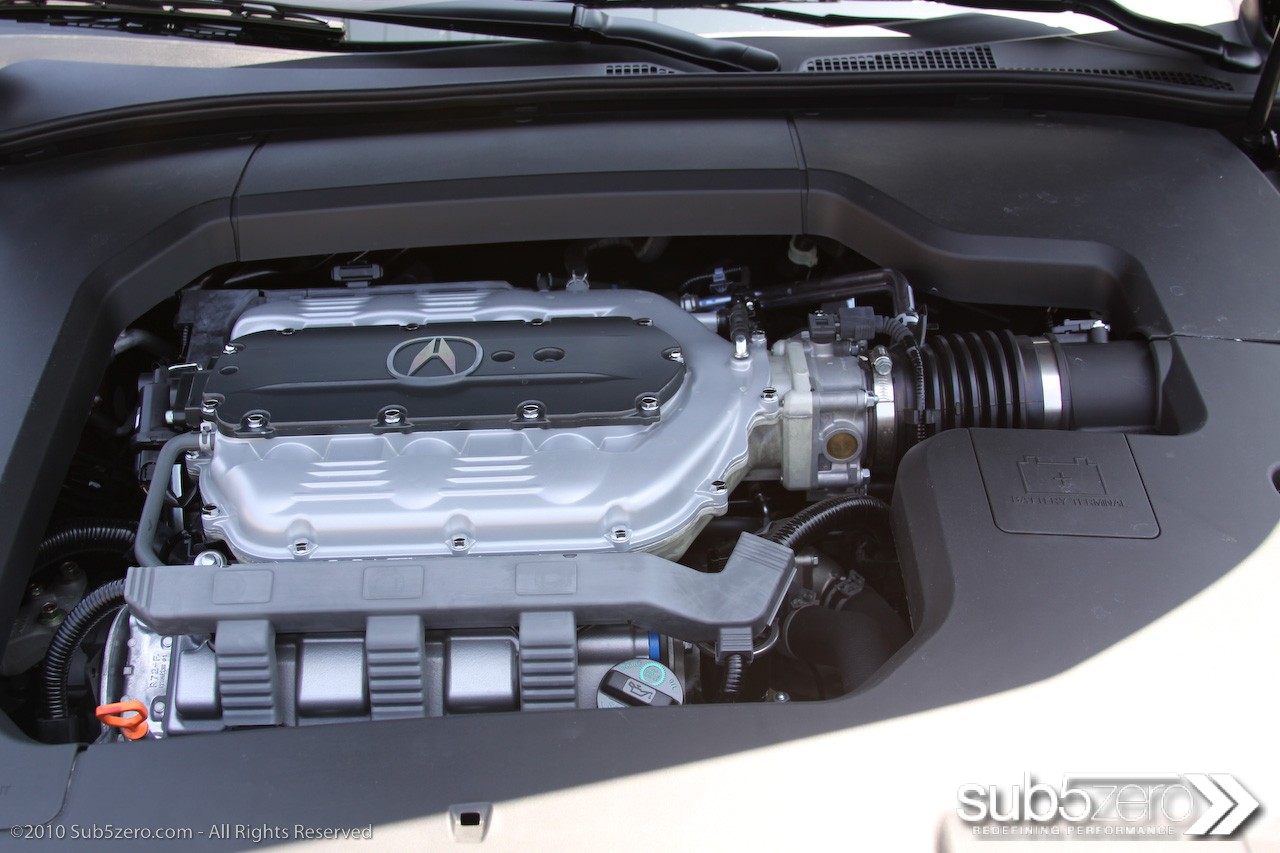 The 2010 Acura TL SH-AWD gets its juice from a 3.7-liter SOHC transverse mounted V6 good for 305 horsepower and 273 lb-ft of torque. Pushing in the Start button on the dash fires up the engine into a steady idle with a sporty exhaust note. Tipping the scales at 3,889 pounds, the car is surprisingly quick and can sprint from 0-60 mph in around 5.6 seconds with the manual tranny. In fact, the TL actually feels pretty fast and the gearbox is an absolute joy with a light touch, silky smooth slotting and a short-throw clutch that gets you through the gears with ease up to the 6700 RPM redline. The pedal placement is spot-on for heel-toe downshifting and the footrest is high enough and at the right angle to reduce fatigue and discourage riding the clutch. Fuel economy is listed at 17 mpg in the city and 25 mpg on the highway for an overall rating of 20 mpg.

The SH-AWD (Super-Handling All-Wheel Drive) system pushes power to the axles via its torque vectoring system, and combats natural front-wheel drive understeer by giving more juice to the outside wheels as needed. The system is exceptional at keeping the car completely neutral at all times. Unfortunately, there isn't much feedback in the wheel which is pretty numb due to the electric power assist steering (EPAS). Another knock is that the car feels every bit as large as its 195.5 inch length and 74-inch width appears when dipping through tight corners.

The suspension is tight and responsive with a two-stage damping system, giving the driver a good sense of the road. While not as comfortable as some of the other vehicles in the class, the sporty feel is welcome and the overall ride quality quite good. The brakes are good enough to instill confidence and we experienced little to no fade. Our model came equipped with 19 x 8 alloy wheels wrapped in P245/40 ZR19 summer tires, with great traction (we live in California so no problem there…). Colder climate natives may want to opt for standard 18-inch wheels in all-season rubber. 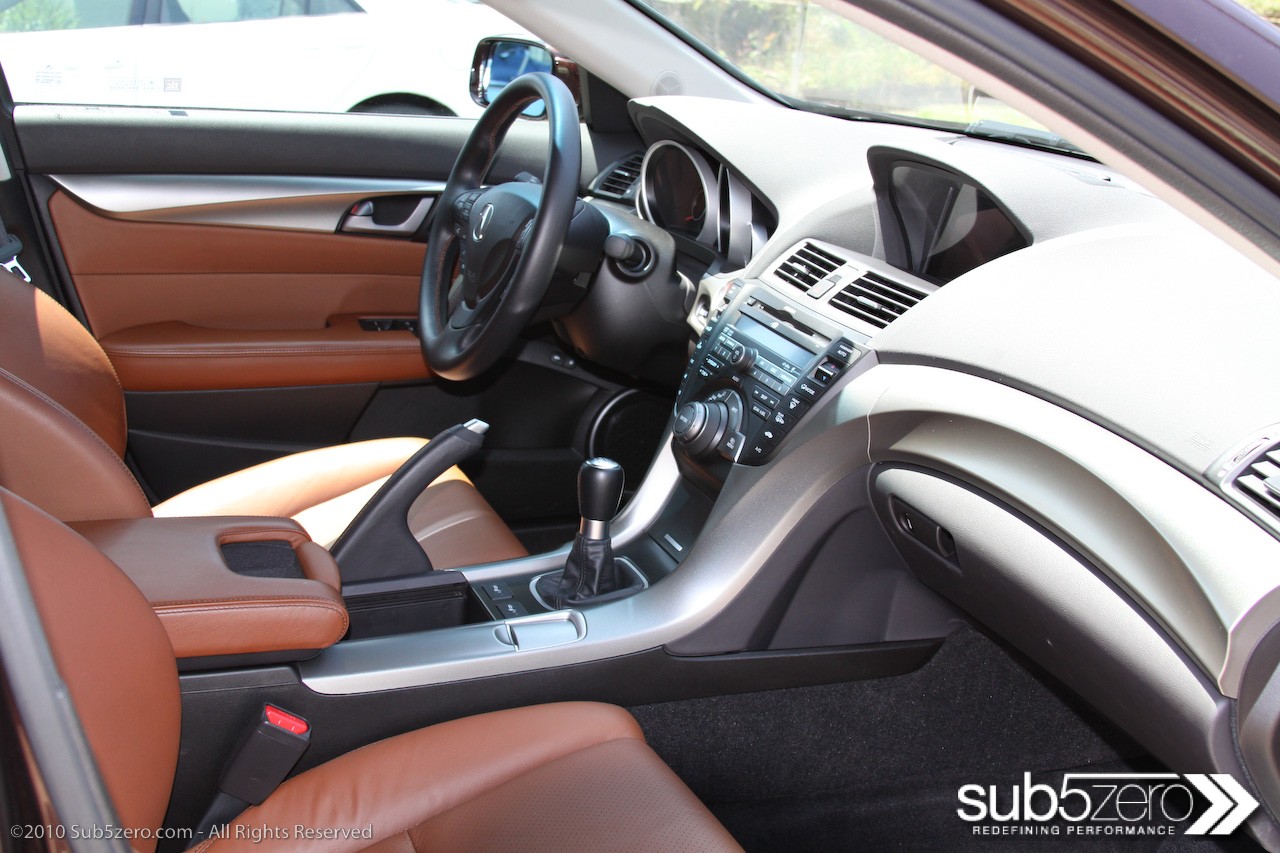 The interior of our test model was swathed in high-quality orange leather (not quite the Ebony color we expected based on the spec sheet) wrapped over nicely contoured and bolstered seating surfaces. The front seats have terrific support as well as comfort and the rear seats much of the same, with quite a bit of leg room. One caveat is that if you plan to sit in the center seat, be prepared to tower over your companions (of similar height) and have a nice firm armrest in your spine.

The overall aesthetic of the cabin is impressive and deserving of the "luxury" title. The gauges are all well placed with good contrast, making them easily legible and highly functional. Residing between the speedometer and tachometer is a small information display whose screen displays the torque distribution for all four wheels with a cool little graphic. Though you shouldn't be looking down while cornering hard, it makes you feel safer nonetheless. (The readout can also display all kinds of other important stuff such as trip info.) 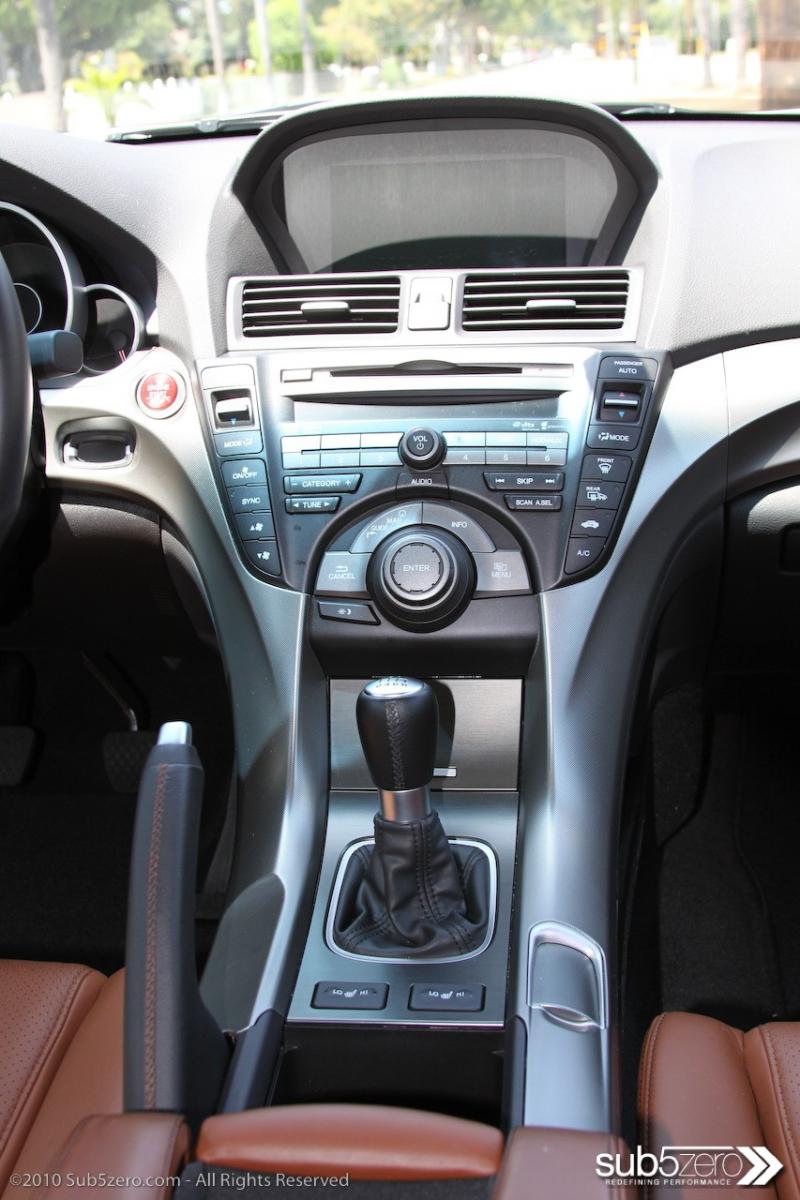 Acura has always done an exceptional job of keeping controls simple and efficient but somehow ran amuck with the center stack. The maze of buttons and knobs was rather daunting at first, although with enough time and attention everything did eventually fall into place. There is a large knob mounted in the middle that serves as command central. It turns both clock-wise and counter-clockwise as well as pivots up/down and side-to-side. Learning when to twist and when to toggle was a point of initial frustration with the features and functions needed a hodge-podge between the two.

The fact that the navigation system is not touch-screen and requires you to scroll through all the letters and numbers by turning the knob is a bit of a chore. That said, the car is chock full of functions including live traffic data and handles reroutes with ease. The graphics are spot-on and visually appealing, and a nighttime mode is engaged automatically.

The 10-speaker sound system is not particularly powerful but delivers clean and balanced audio and the ability to dump CDs onto a built-in harddrive is a huge plus. In addition, access to XM and HD Radio and input jacks for MP3 players and USB inputs for cell phones give you all the music you could ever want. The rearview camera was especially useful with yellow lines demarcating the car’s position relative to all objects. There is no proximity chirp but the visual cues are actually much more useful. 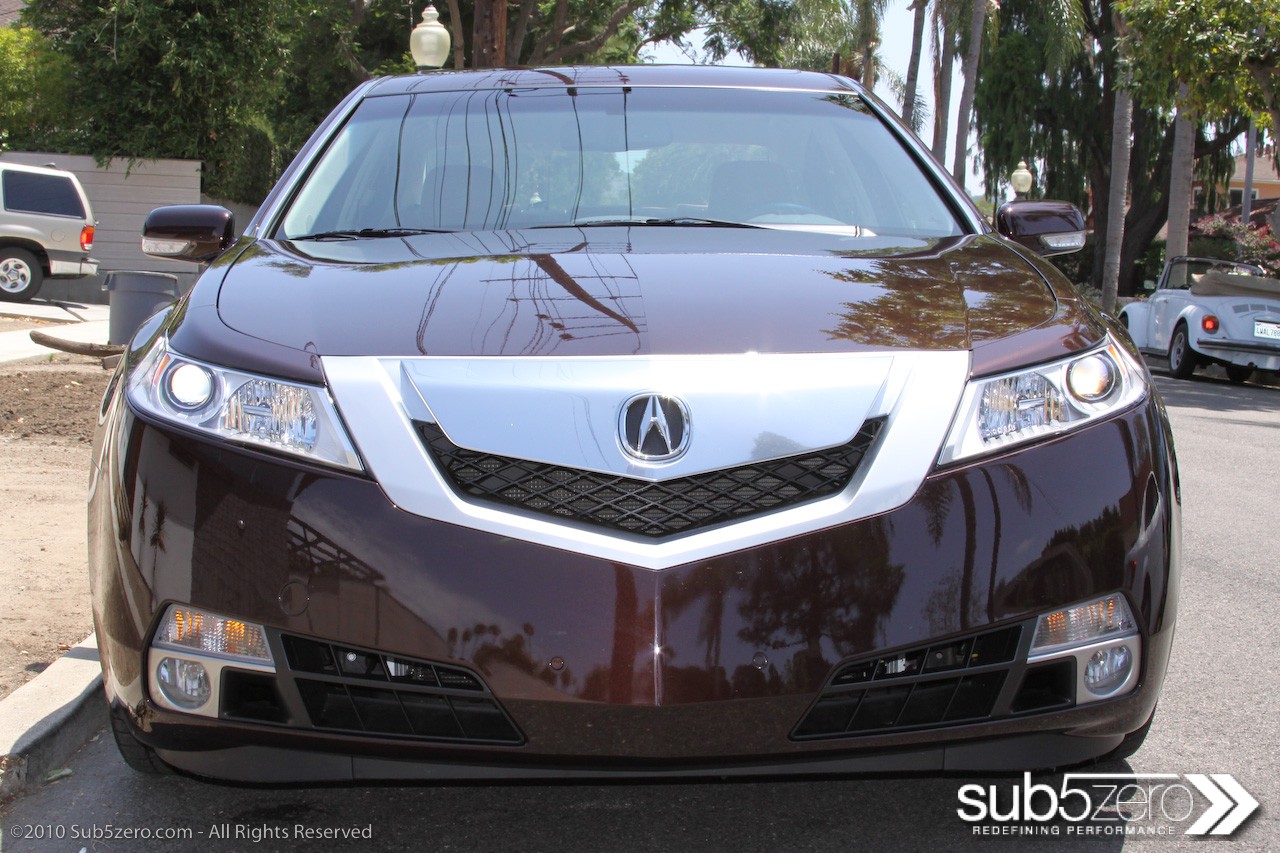 The 2010 Acura TL SH-AWD 6MT is an exceptional vehicle whose assets have unfortunately been overshadowed by the design aesthetic of its beak. Acura has its ear to the street and many dealers now provide the option to make the fascia less pronounced by color-matching the grill with the rest of the exterior. Our model donned Mayan Bronze Metallic paint with little gold flakes and, while not necessarily our first choice, had a great look to it. With this treatment, the car would definitely be sexier.

The 6MT version is still a bit of a rarity with only about 3500 being produced but ,if you can track one down, well worth the hassle. Not only is the vehicle 88 pounds lighter but it has a sturdier front driveshaft and beefier motor mounts for the added anticipated abuse. In addition, you get a car that's seven-tenths quicker than its automatic counterpart.

The TL has very few demerits and its performance, luxury appointment and techno-bits are all impressive. It even has across the board 5-star government safety impact ratings. And with driver and passenger front and side airbags, side curtain airbags, Vehicle Stability Assist, four wheel disk brakes with ABS, a tire pressure monitoring system and active head restraints for front seat occupants, stakes up better than many other options at this price point.

It may not be as quick as the Audi S4 or as appealing as the BMW 335i but you get a hell of a car for the money. At $44,195 (including destination and handling) you’d be hard pressed to find everything that the 2010 Acura TL SH-AWD 6MT provides in another vehicle.