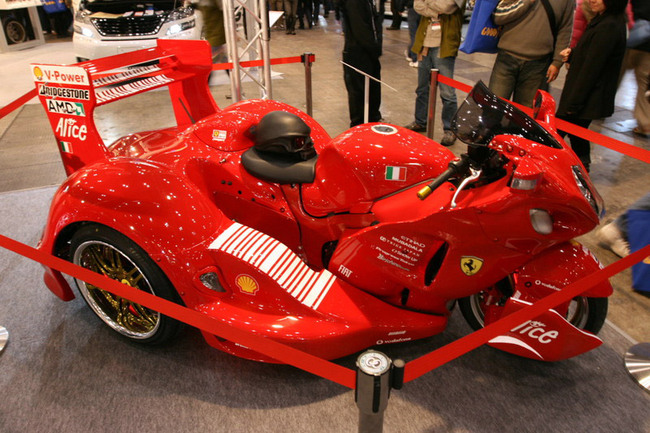 In the world of superbikes, the Suzuki Hayabusa is arguably the Bugatti Veyron of the segment. The current iteration packs a 1,340cc four producing more than 190hp and distinct, carefully-sculpted bodywork designed to help it slice through the air. These features help it rocket to an electronically-limited top speed of 186 mph faster than a popcorn kernel turns inside out when heated. (Okay, that’s a slight exaggeration, but the point is it’s hella fast.)

But as extraordinary as the Hayabusa (“’Busa” to its friends) is, it’s kinda hard to make yours stand out from the rest. And with an MSRP in the $13,000 range, they aren’t exactly hard to come by. One way that’s guaranteed to separate it from the flock (“Hayabusa” is the Japanese name for the Peregrine Falcon, doncha know.) is to convert it into a trike. Initially, this seemed to be enough for one Japanese ‘Busa owner, but he eventually set his customizing sights higher. Like, Ferrari Formula 1 car higher. 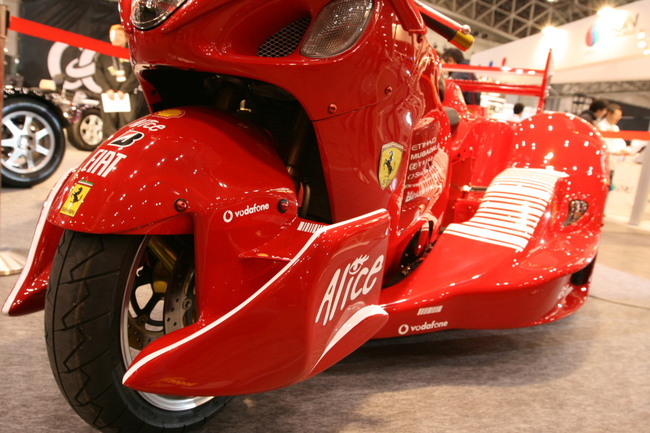 The three-wheeler conversion kit has been modified with scoops, flaps and a rear wing inspired by one of Maranello’s grand prix racers, and the front fender has also had an F1-inspired wing grafted on. The whole ensemble was then repainted in the same shade of scarlet as the four-wheeled guided missiles, and decorated with most of the same sponsor logos.

Now we know what you’re thinking: In today’s hyper-litigious society, there’s no way Ferrari can be happy that this thing exists. Thing is, you’d be wrong…sort of. You see, Ferrari apparently kinda digs this homage to their flagship motorsports program; however, they’ve made it crystal clear that they will not tolerate the construction of any additional examples, so the F1 Hayabusa Ferrari, as its creator has christened it, will remain a one-of-one. So basically, no one can clone this ride without facing legal action; if that isn’t the best way to guarantee exclusivity and uniqueness, please tell us what is.