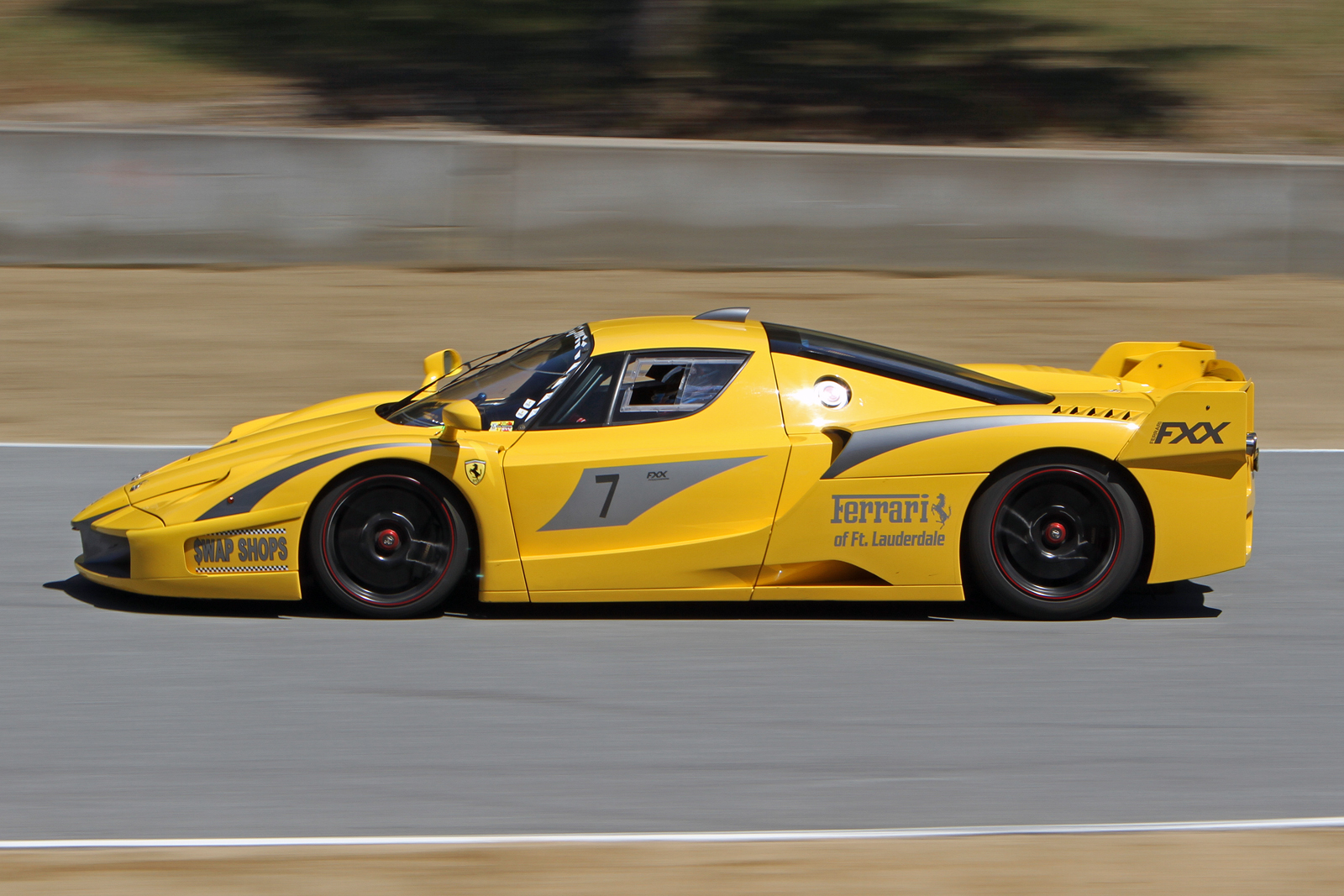 Our coverage of this weekend’s Ferrari Days at Mazda Laguna Seca Raceway continues with the FXX and 5XX Programme. We had the opportunity to see 10 of these phenomenal machines up close this weekend – 3 FXXs and 7 599XXs made the trip to Laguna Seca. And what an incredible symphony they made! 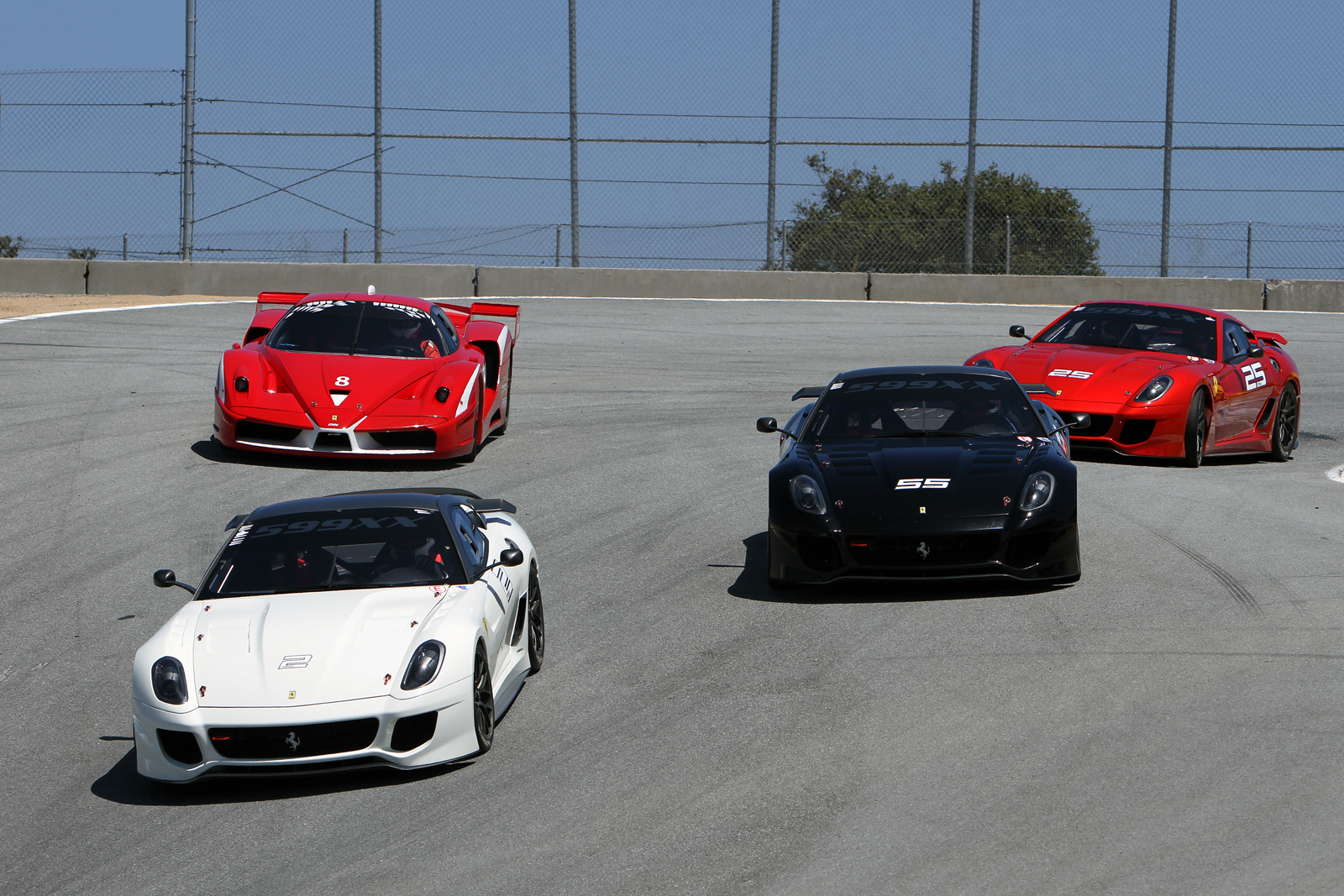 Launched in June of 2005, the FXX Programme gave the opportunity for 29 of Ferrari’s top customers to essentially become test-drivers for the Maranello factory. Data collected in each of the track sessions – which are fully supported by Ferrari mechanics and engineers – is collected to help Ferrari develop future road-going cars. There were 29 customer FXXs built, and a 30th which was presented to Michael Schumacher when he retired from F1 in 2006 (Schumacher has since returned to F1 racing). This FXX, car number 30, was one of the 3 FXXs at Laguna Seca this past weekend. Each FXX originally cost about $1.8 million and included the original planned track events. 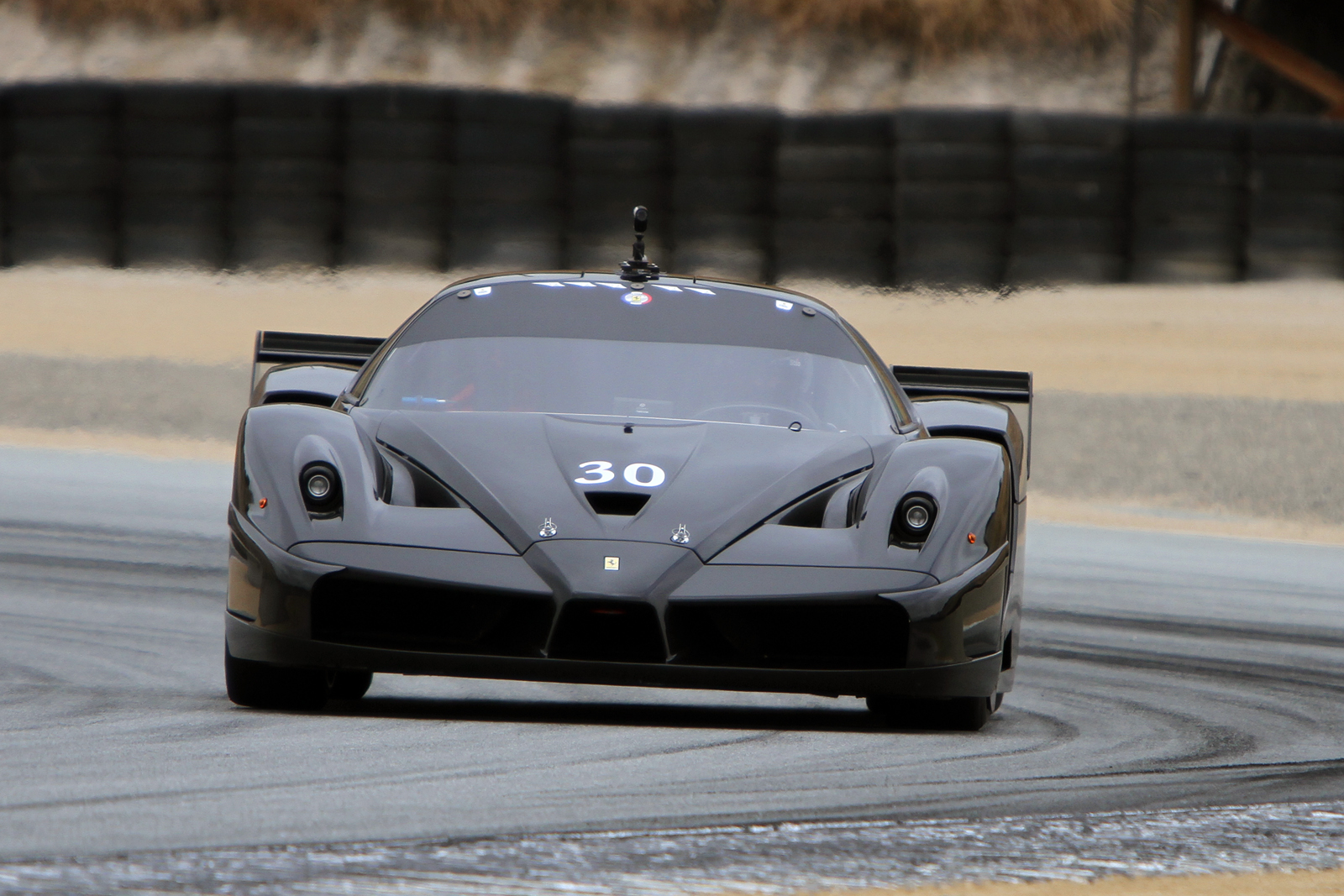 The program was originally intended to last only 2 years. But Ferrari chose to extend it – making available an incredible upgrade package for each FXX, called Evoluzione. The improvements made to the cars were made based on the more than 35,000 km of telemetry gathered during the first two years of the program. After the upgrade, the FXX’s V12 puts out about 850 HP (originally a measely 789 HP) and can reach 400 km/h (249 mph). It can accelerate from 0 to 100 km/h in 2.5 seconds. 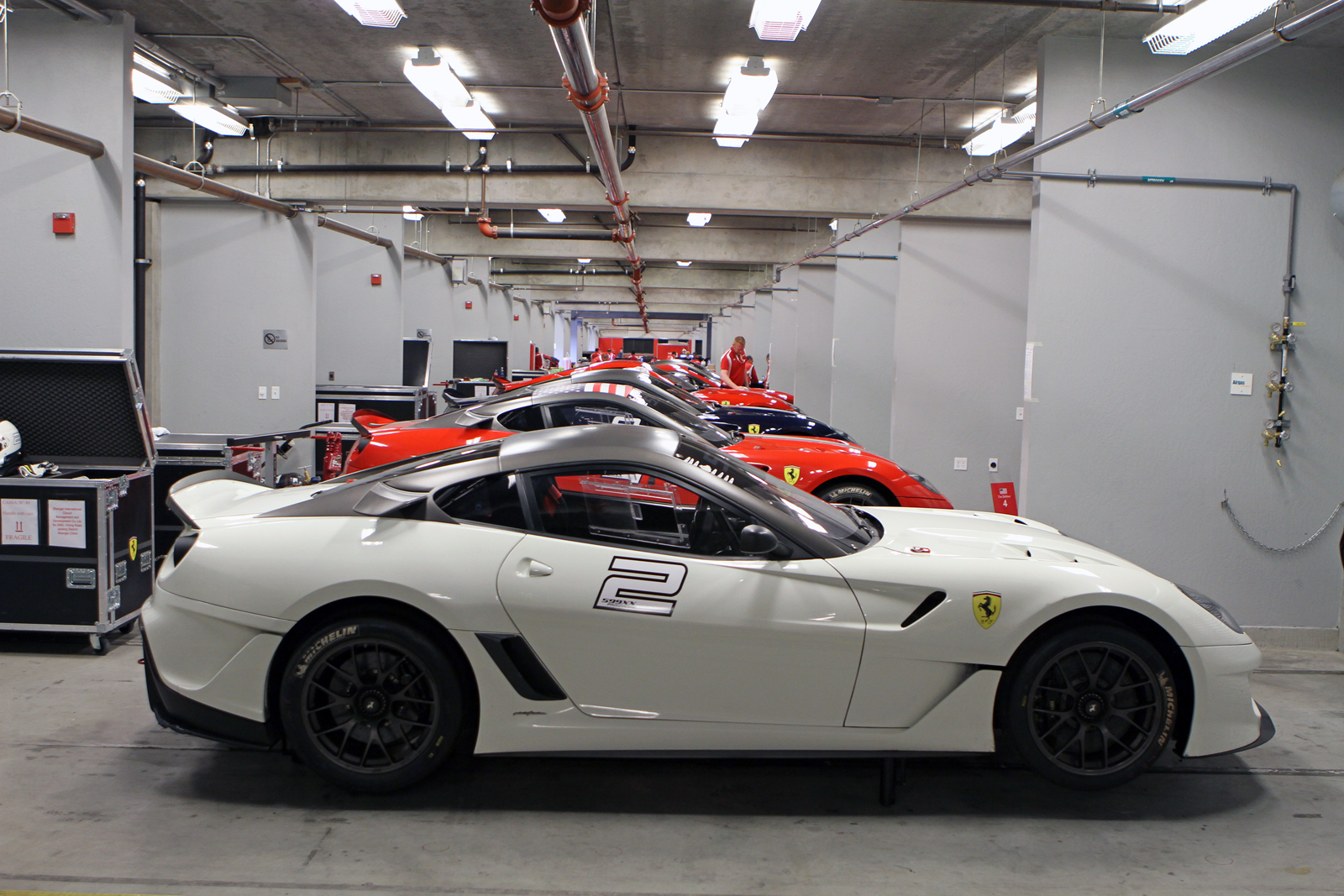 Based on 599 GTB Fiorano, the 599XX’s front-mounted V12 puts out about 700 HP at 9,000 RPM. It has one of Ferrari’s fastest gearboxes developed to date – able to shift gears in about 60 ms. According to Ferrari, the 599XX features a concept called “High Performance Dynamic Concept” which they say is “designed to get the maximum performance from the car by combining its mechanical limits with the potential of its electronic controls.” There is no shortage of technology in these cars – and as a goal of the program, it will all someday be available on a Ferrari you can buy for the road. 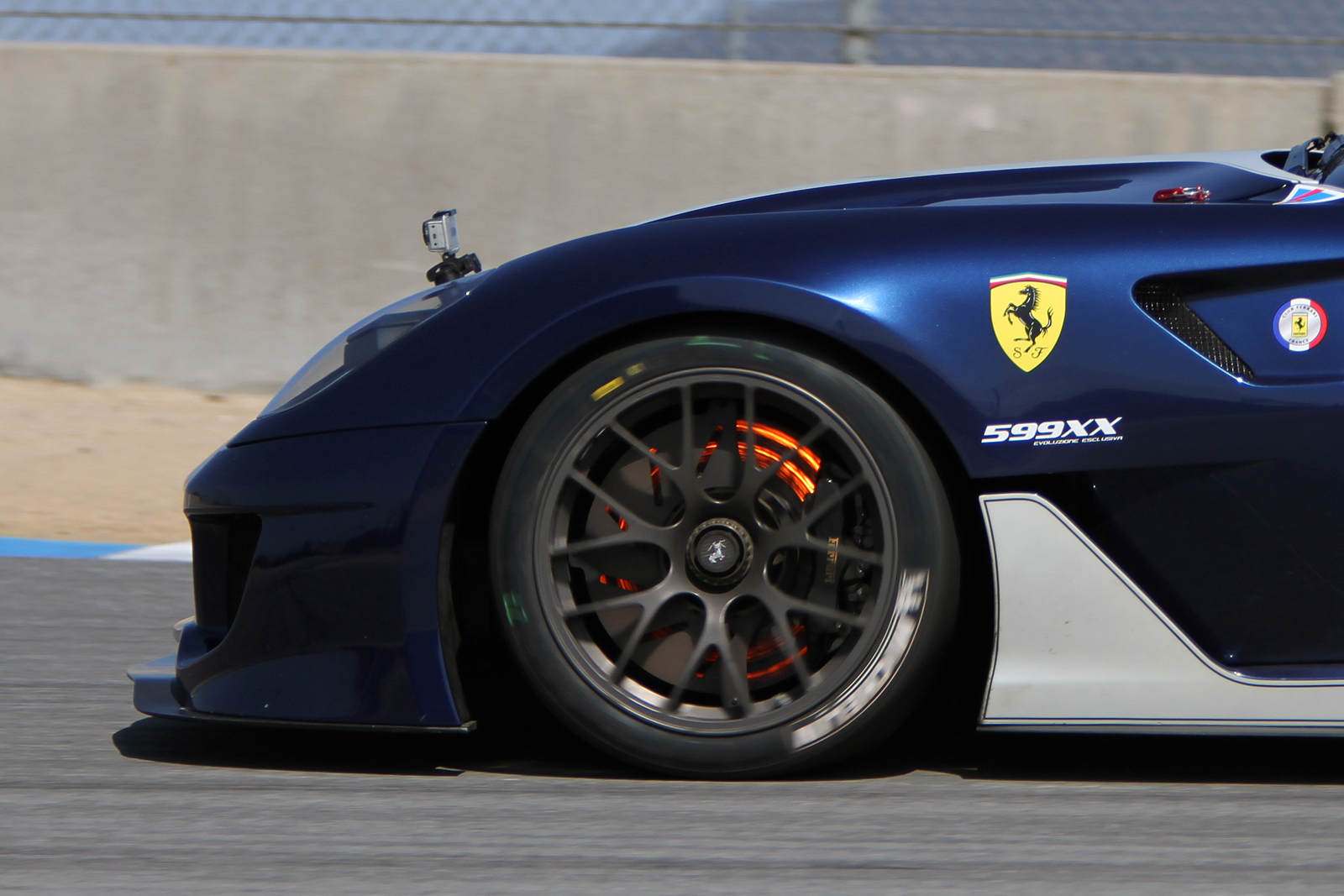 Sadly not all FXX’s finished the weekend in the same condition they started, as you’ll see in our photos. But as another FXX driver was overheard saying as we watched the damaged FXX being lowered from a flatbed, “carbon fiber can be replaced, at least the driver is ok”. There are 7 official events worldwide for these cars this year. Both FXX and 599XX Programme cars will make their next appearance in Shanghai’s F1 Circuit in July.