The Fastest VW GTI in the World [w/VIDEO] 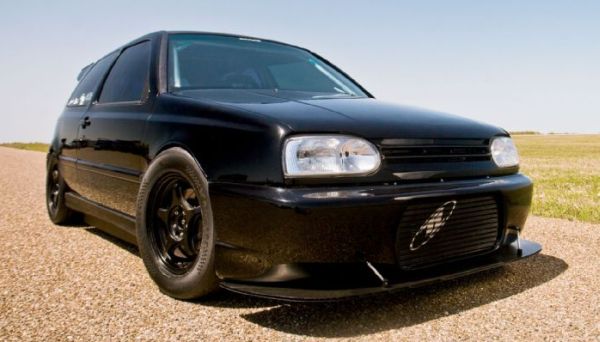 What car will go 200mph? If you ask your average “man on the street” he’ll list the usual: Ferrari, Lamborghini, “ooh what’s the new one, the Veeron?” and so on. But yout don’t need an Italian name, seats made from seal eye lids and a six-figure price tag to go fast. Just ask Jeremy Freedman, who did it in a 1997 GTI.

People have been turning cars from zeros to “heroes” – morphing regular transport into high-speed monsters – for 100 years. Look at old photos of Bonneville and you’ll see what I mean. Man has been obsessed with speed for a long time, but the game has recently changed. We no longer focus only on V-max, but how quickly you get there. Case in point: The Texas Mile. Once a year people bring their high-powerd cars to see how far they can turn their speedometer needle – from a stop – in one mile. It’s the contest that made VRAlexander (CGT), Evolution Motorsports (996 TT-XXX), and Underground Racing (Gallardo TT) internet legends.

And that’s just what Jeremy has done. Not only did he hit 200mph, he did it in a car with the aero properties of LEGOs, a trait of the car he chose to leave alone. Other people put on new noses, giant wings, and slap tape over the A/C vents, just to make the car slippery. Not Jeremy. No here’s what he did: Bored the 10 year old VR6 motor from 2.8 to 3.0 liters, added a turbo the size of Rhode Island, a stronger clutch, LSD and slightly bigger wheels. The result is a practical hatch-back that has 800hp, enough to belittle the most pure-bred hyper-cars of today. Everything you need  for speed and nothing more. No special wheel covers, no carbon fiber, no unicorn tears in the gas tank. Transmission? Stock. Windows? Glass. Profile of a staircase? Check.

The result of his hard work and planet-sized cojones was crossing the mile mark at 208.1MPH, and thus becoming the fastest GTI in the world. Our hats are off to Jeremy Freedman and his 1997 GTI. Thanks for telling the rest of the world, “Who needs slipstreams and Zondas, just use your GTI.”