You know, there’s just something fundamentally right about hopped up versions of cars that were best known for working for a living. Sure, the 1994-’96 Chevrolet Impala SS and 2003-’04 Mercury Marauder were mean, muscular living rooms on wheels that were (and still are) awesome by themselves. But the fact that they were both based on rugged, body-on-frame favorites of LEOs and cabbies across the continent (the Chevy Caprice and Ford Crown Victoria, respectively) only ups their badass factors. They’re like the old school, stereotypical, meme-worthy manly man who worked at the steel mill Monday through Friday and participated in an underground fight club on the weekends. But such dual-personality draft animals were a uniquely American phenomenon, right? Not if you lived in Japan about a decade-and-a-half ago, because that was the place and time inhabited by the TRD Comfort GT-Z Supercharger. 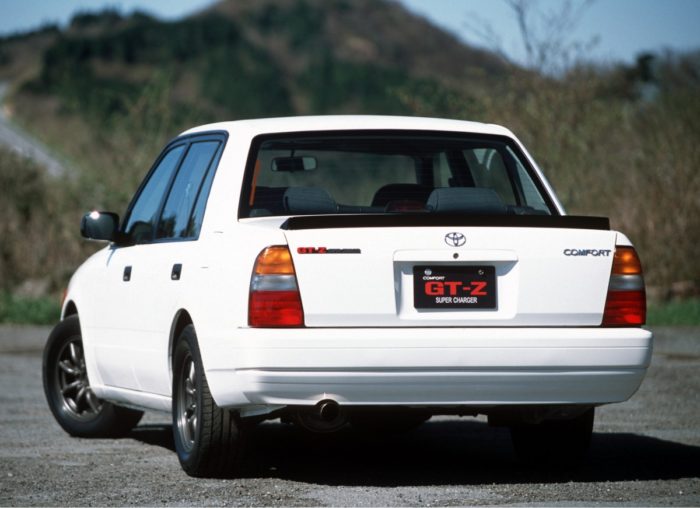 Of course, before we can get into the nuts and bolts of this fascinating ride, a little background info is in order for all of our fellow gaijin in the room. In 1995, Toyota introduced the tenth-generation, S150-chassis Crown and Crown Majesta large rear-drive luxury sedans. They were the first generation of Crowns to utilize unibody construction (Yes, Toyota was still making big, body-on-frame RWD luxobarges spiritually ‒ if not quite proportionally ‒ similar to American broughams as recently as 1994!), and the first to be joined by a separate restyled and de-contented model aimed at fleet buyers (namely taxi companies and law enforcement agencies), the Crown Comfort and its short wheelbase companion, the Comfort. Known by the XS10 chassis code, the Comfort and Crown Comfort (as well as the JDM-only Crown Sedan, which featured taillights and other details more reminiscent of the “civilian” Crowns) were recognizable for their tall, boxy greenhouses and simple interiors. But their workhorse aesthetic wasn’t just skin deep: The Comforts traded the Crowns’ independent rear suspension for a live axle (with drum brakes to boot), while the engine choices were limited to a quartet of 2.0L LPG burning engines (three inline-fours and an inline-six) and a trio of diesel four-bangers displacing between 2.2L and 3.0L, and none of the seven powerplants was rated higher than 112 horsepower. Hardly the bones upon which you’d build a big, blue collar sport sedan.

But Toyota Racing Development (TRD to its friends), Toyota’s long-time in-house tuning and motorsports division, saw those performance shortcomings not as deterrents, but as dares. For the exterior, TRD added a set of retro cool 15” RS Watanabe wheels finished in gunmetal gray, as well as a front air dam, rear lip spoiler, and body color bumpers and trim (except for the grille insert, which was black). Inside, a set of body-hugging TRD branded bucket seats was fitted in front, along with a TRD steering wheel, shift knob for the console-shifted 5-speed manual (Regular Comforts could be had with column-shift 4-speed automatics and 4-speed manuals.), and some auxiliary gauges in the center stack. Those extra gauges were needed to keep tabs on the hotter engine TRD swapped in under the hood. 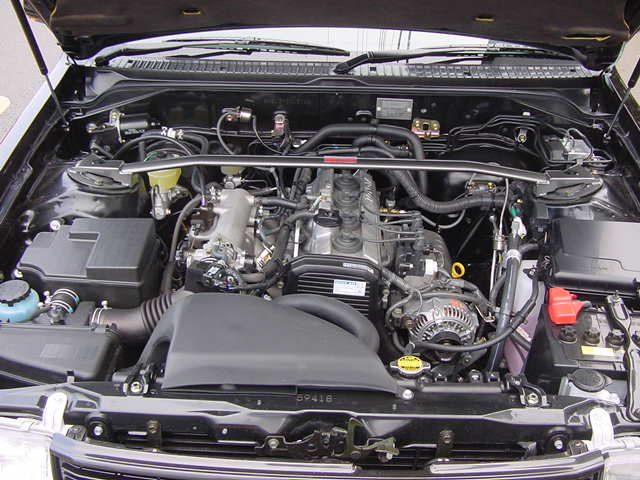 So what was that hotter engine from Toyota’s arsenal? A torquey UZ-series V8? A member of the hallowed JZ family of inline sixes? Wrong on both counts: It used a 2.0L variant of the “S-Engine” inline-four. No, not the fire-spitting turbocharged 3S-GTE like was found in the second-gen MR-2 and various generations of Celica GT-Four/All-Trac Turbo. We’re talking about the Plain Jane 3S-FE, like what was found in the second-gen Camry. Yes, we know, that choice was all kinds of lame considering all of the formidable Toyota powerplants we listed were still in production at the time, but TRD was at least kind enough to install an Ogura Racing Roots-type supercharger that bumped quoted output to 158 horsepower and 163 lb.-ft of torque. Still nowhere near awe inspiring next to the throaty V8s fitted to the aforementioned factory-tuned American heavyweights, certainly, but consider that neither the late model Impala SS nor Marauder (nor the vanilla models on which they were based) even had a stick shift as an option, and that the Comfort was more in line size- and mass-wise with their front-drive Lumina and Sable contemporaries. And besides, we very much doubt you’d want much more go than what the blown 3S-FE was serving up with the GT-Z’s pretty much unaltered suspension and brakes (Yes, even the rear drums stayed!).

If you’re still interested, we’ve got some bad news (and we’re not just talking about the fact that you won’t be able to legally bring one to the U.S. until 2028 assuming the rules don’t change): Only 59 of these tripping-balls-taxis were made, so there’s never going to be a massive selection for sale at any given time. Still, we can’t help feeling that we Americans missed out on a comfy, reasonably practical cruiser with room for the homies and their stuff. And with sales of sedans – particularly big, wafty ones – currently in freefall in the face of crossover mania, we don’t foresee anyone picking up the baton. And that’s just whack, yo.