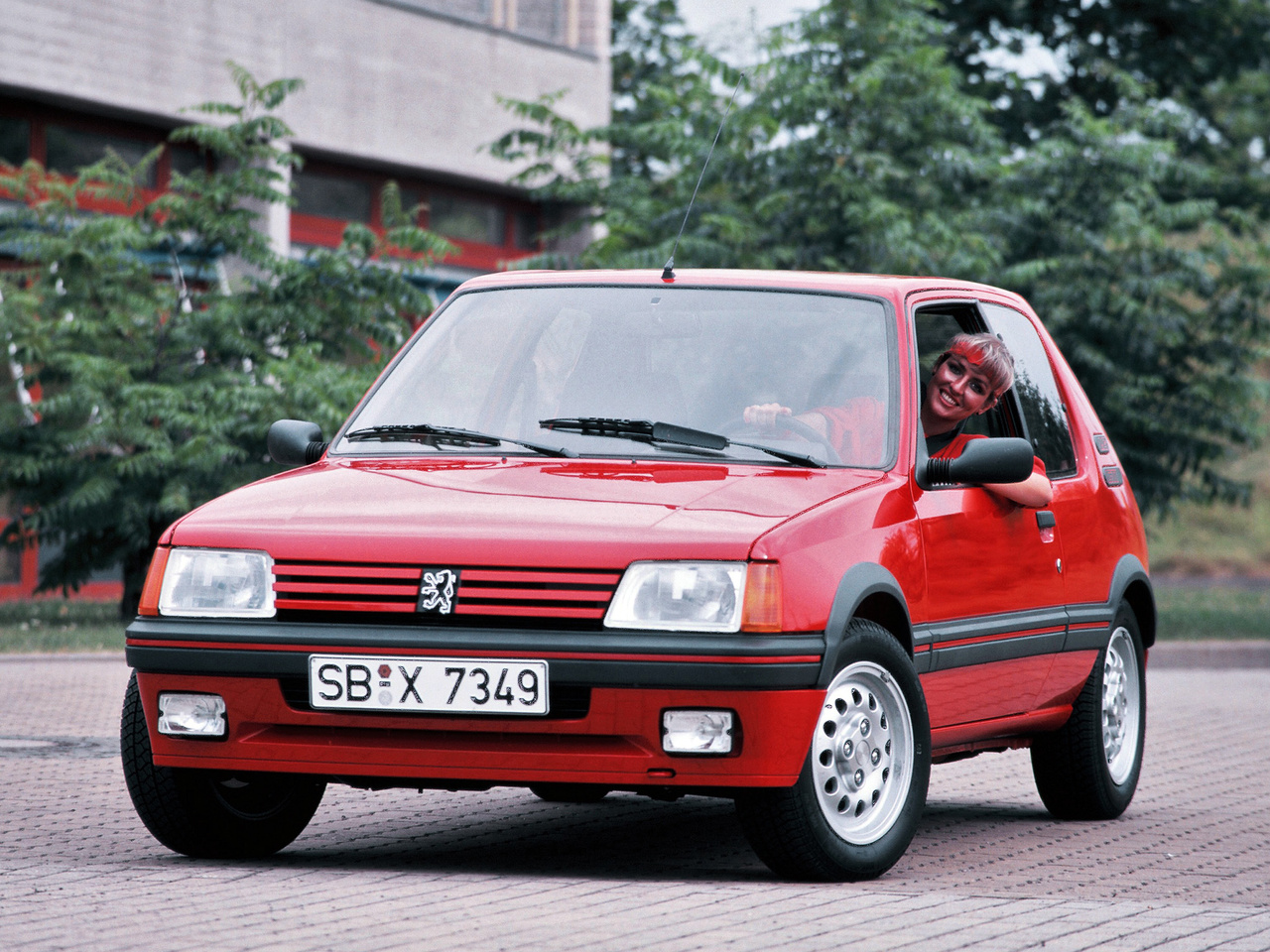 As the 1970s were drawing to a close, the traditional formula for a small European sports car (two seats, rear-wheel-drive and a fold-down roof) was being replaced by a new formula: The hot hatch. The first modern hot hatch (We’re excluding the O.G. Mini Cooper, since it had a funky bottom-hinged trunklid rather than a hatch.) to really gain traction in the marketplace was the Volkswagen Golf GTI, which took Europe by storm upon its introduction in 1976 and won a huge following over here beginning in 1983 as the Pennsylvania-built Rabbit GTI.

Naturally, VW’s success did not go unnoticed by the competition; by the early ‘80s there was a bumper crop of diabolical 3-doors being peddled by manufacturers from Europe and Japan. Sadly, not all of them followed in the ur-GTI’s wheeltracks and made it to the U.S. One of the ones we really wish had gotten its Green Card shared part of its name with that of the category’s originator. We speak, of course, of the Peugeot 205 GTI. 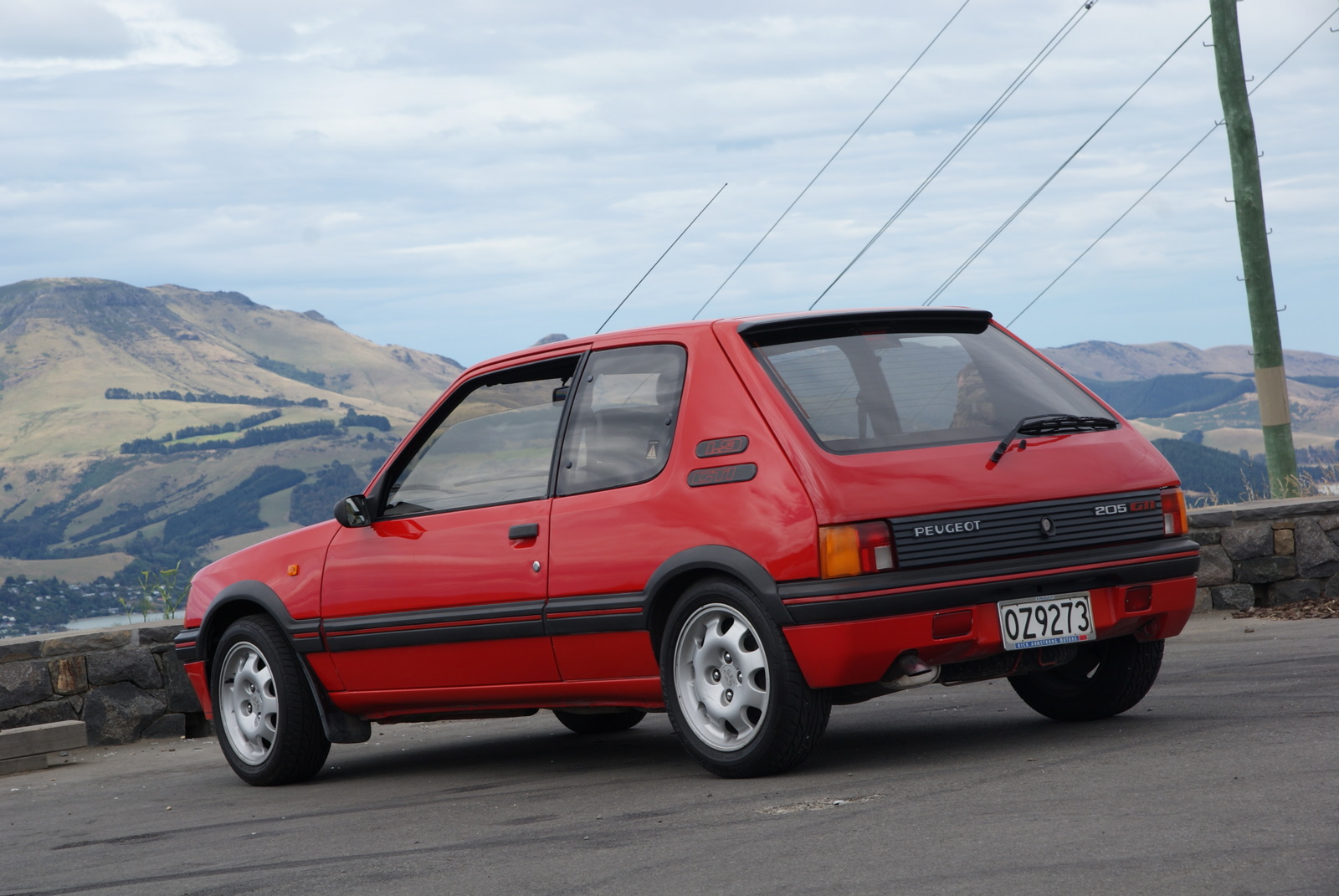 Launched one year into the 205’s life, the original French GTI featured a 1.6L inline-four producing all of 104hp. Even when matched with a 5-speed manual transmission, straightline performance wasn’t exactly stirring, so beginning in 1986 the 205 GTI was offered with an optional 1.9L engine rated at 126hp (Later 1.9s were fitted with a catalytic converter, which dropped power to 120hp.). A year later, the 1.6L engine was fitted with the 1.9L engine’s cylinder head (which featured larger valves) to bring output up to 115hp. Note that all three engines were of the single-overhead cam, 8-valve persuasion.

Like Volkswagen, Peugeot didn’t just drop in brawnier engines and call it a day. The suspension was thoroughly tweaked, the brakes were upgraded (The 1.9 was treated to four-wheel discs.) and the wheel arches were enlarged to accommodate bigger alloy wheels and tires (14” on the 1.6, 15” on the 1.9). Aforementioned wheel arches were treated to black plastic flares, which matched the body side and bumper moldings (though those featured a red stripe down the middle). A deeper front valence housed fog lights, and 205 GTI badges appeared on the rear hatch and the trim pieces at the base of the C-pillars. Venturing inside, upgrades included sport seats covered in an exclusive cloth (1.6) or half-cloth, half-leather (1.9) pattern and “GTI” on the steering wheel hub in red lettering.

While it may not be possible for a car to become a cult classic from new, the 205 GTI came about as close as a vehicle can. As with VW’s GTI a decade or so earlier, the motoring press on the Continent and in Britain went straight-up gaga for this little French doorstop. And why wouldn’t they? No matter which flavor you chose, you had a car that was practical, cheap to buy, cheap to own – at least until insurance rates started creeping up due to spikes in thefts and accidents – and eminently nimble. Even today, European sport compact aficionados speak of it with tremendous reverence. 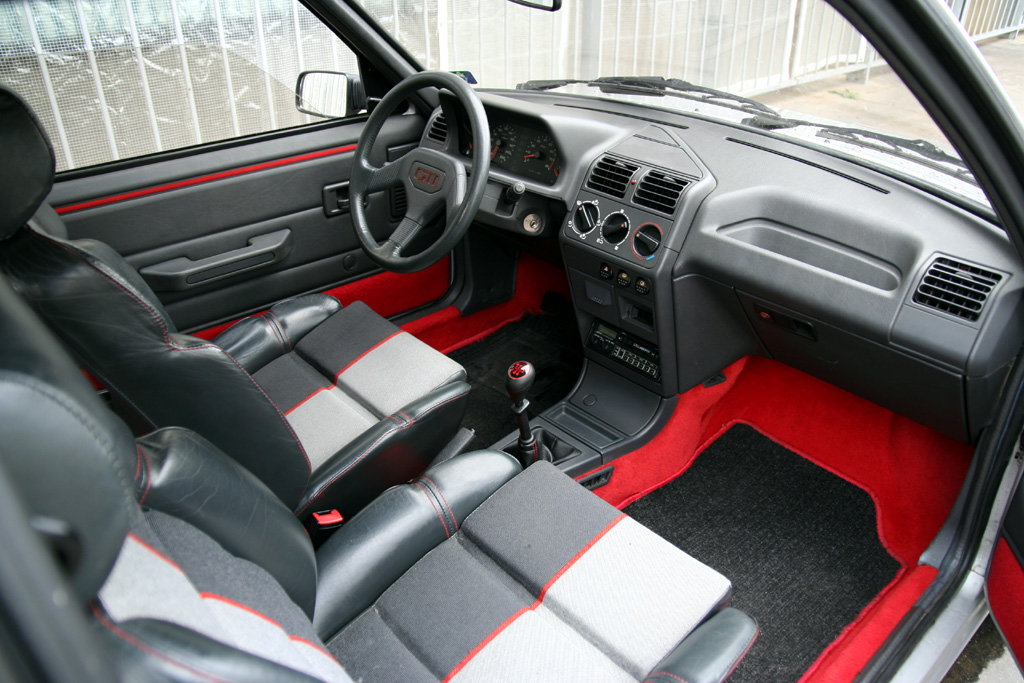 We’re guessing American hot hatch devotees would worship the 205 GTI, too, if it had ever been made available here. Legend has it that in late 1984 Peugeot gave selling the 205 GTI in America serious consideration on the strength of its brisk sales back home, but obviously got cold feet when all was said and done. This is actually understandable since, at the time, the company’s U.S. arm was dealing with the triple whammy of aging designs (The 604 flagship sedan was actually gone from our shores at the end of ’84.), an increasingly unfavorable dollar/franc exchange rate, and a cavalcade of quality snafus. Revising the 205 GTI to meet American safety and emissions standards would have been an expensive and time-eating process; not the sort of thing to deal with when you’ve got far bigger fish to fry.

There is, however, hope. The federal government’s rolling 25-years-and-older safety and emissions exemption on cars that were never sold here makes it possible to bring in your own 205 GTI. And if you’re fortunate(?) enough to live in California, you should theoretically (key words being “should” and “theoretically”) be able to register a 205 GTI for street use by swapping in the engine and every single piece of emission control hardware from a 1989-’91 U.S. market Peugeot 405 or 405 Mi16, the latter being powered by a twin-cam, 16-valve 1.9L four and a popular swap among 205 GTI tuners. So maybe the 205 GTI isn’t quite forbidden fruit, but royal-pain-in-the-ass, dealing-with-seven-circles-of-bureaucratic-hell fruit isn’t quite as catchy now, is it?