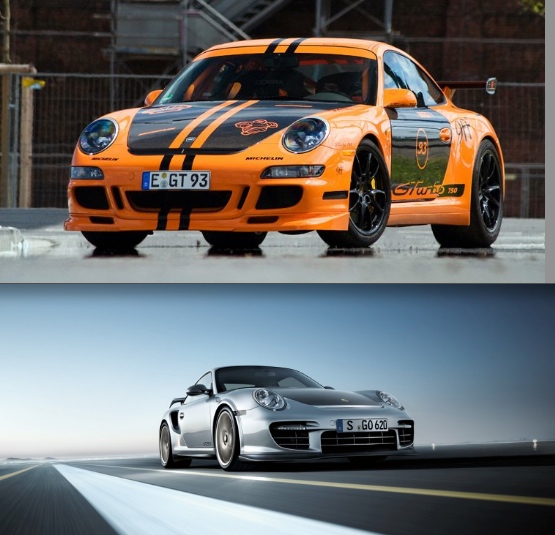 A colleague of mine recently said, “Writing about cars you’ve never driven is like writing about women you’ve never slept with.” Well I can tell you, human males spend more than 67% of their time comparing women they’ve not only never slept with, but we, er, they have zero chance of ever meeting. How many times have you challenged a friend to a duel, simply because he said he would rather nail Jessica Simpson than Salma Hyek? I did 4 years in jail because an elderly gentleman (may he rest in peace) told me that Lucille Ball would be better in bed than Eva Mendez.

We all spend a large part of our day wondering, “What if…” It’s with this idea that we bring to you a new segment here at Sub5zero, creating theoretical races we wish would become a reality. For this go-round we are pitting a factory-made model boasting big home-built performance against against a beast from the streets of the tuner world. Today it’s a battle of Porsche vs Porsche; The brand new 2010 GT2 RS versus the 9ff GTurbo 750 (a GT3 RS with a “mild” power boost). Sure, we didn’t drive them, but what if…

Comparing the sexual skills of girls we’ve never even met can be called silly and unreasonable, not to mention there is no way to scientific method to prove these “theories” (perhaps a good job for Mr. Clooney if this acting thing doesn’t work out?). On the other hand, comparing cars that haven’t been in the same room is slightly more scientific, thanks to physics. There’s no scientific instrument to measure how adventuresome Ms. Simpson is, but there is one that can measure how fast a car goes 0-60. We’ll be comparing horsepower, acceleration, lateral g’s (when available), suspension and brake setups, reliability, amenities and price. 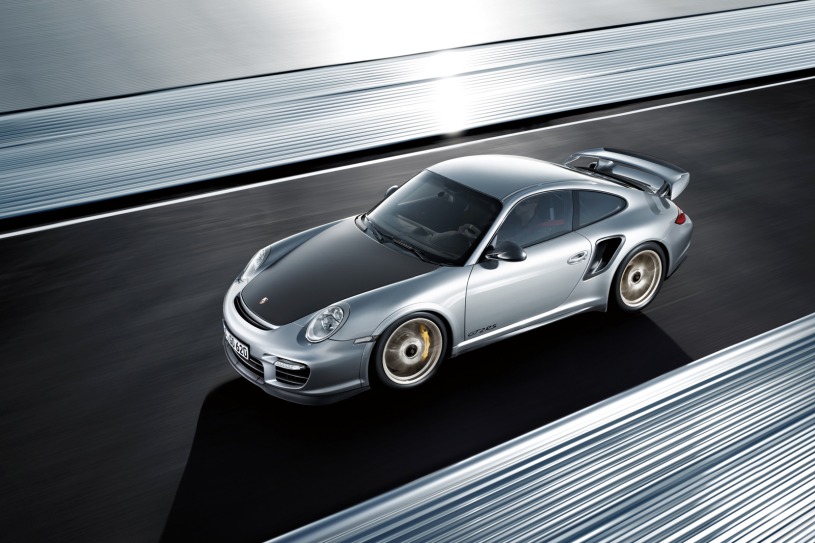 We chose the 2010 Porsche GT2 RS for the first segment because – to put it in Hollywood speak – it’s got heat right now. We brought you the specs on this car less than a month ago, so like a father teaching his son to swim the “old school” way, let’s throw it in and see if it can swim.

The GT2 RS is a harder, lighter and more powerful version of the hellion known as the GT2. That was a 550hp terror that would wag its tail without much warning. Since RS means “Second helping” in German (don’t look it up) the GT2RS has 70 more horsepower for a grand total of 620hp. What makes the GT2 what it is is how that power is applied to the ground, torturing the asphalt in the process. A 6-speed transmission sends that power to the rear tires only, giving new meaning to power-oversteer and giving the Porsche TCS system a migraine. When the power does hook up, this car hits 60mph in only 3.5 seconds, nipping the heels of AWD-equipped contenders from Nissan and Lamborghini, and on to a V-Max of 205mph. 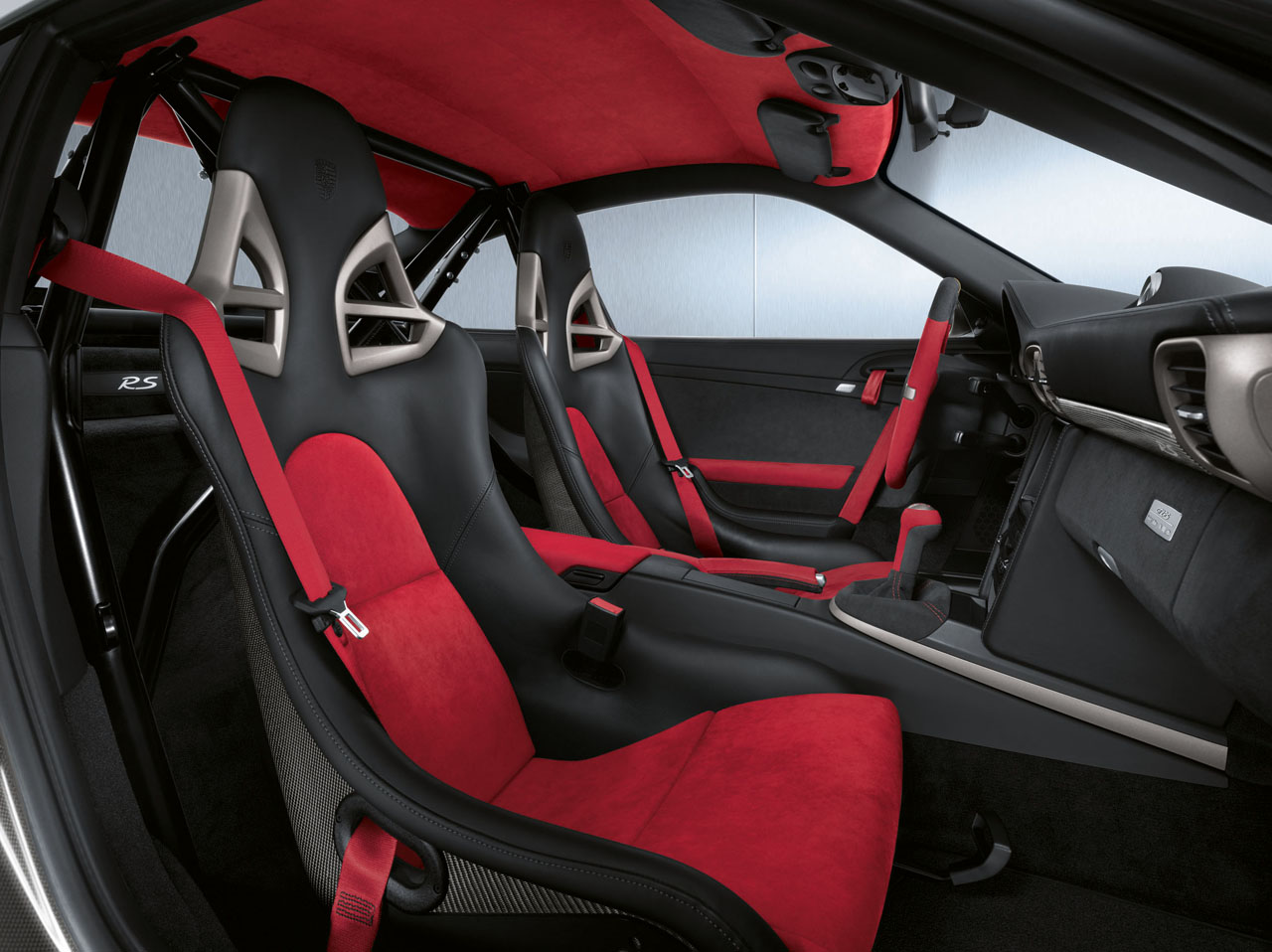 It’s not just about power with an RS though. Using carbon fiber for the hood, splitter, wing and intakes, Porsche brought the weight down to 3,020lbs. It’s also more rigid, thanks to a tubular roll cage that sits inside the Alcantara filled interior, surrounding the CFRP seats. It should be interesting to explain to your date why there’s no door handle, yet there’s a red pipe 2 inches behind her head…

At $250,000 it’s also a fair deal, considering it can wax a Carrera GT costing twice as much. Coupled with new suspension, sway bars and a better PSM (Porsche Stability Management) this car is built to own racetracks. And it does, setting a record as the fastest production car to lap the Nurburgring with a time of 7:18s. It’s simply the fastest car Porsche has ever offered for sale. So… Let’s recap: 3,000lbs, 620hp, faster than a Carrera GT and a Nurburgring lap record. If you think production cars are soft, this is anything but.

Remember, I said the GT2RS was the fastest car Porsche has ever offered for sale. 9ff on the other hand, makes a few cars that will make a Carrera GT cry, drop-out and finish high school from home. While we could put the GT2RS against a 1000hp beast from EVOMS, that would not only be unfair, it wouldn’t be a good comparison. Anyone can build a straight-line car that’s faster the GT2RS, but it’s about more than horsepower. 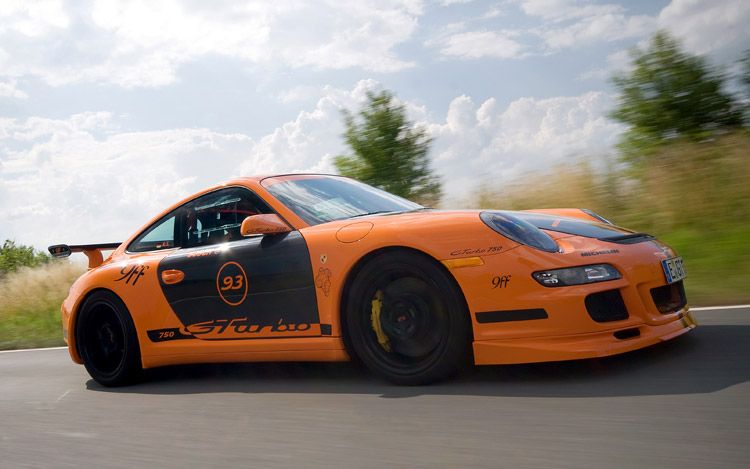 The 9ff GTurbo 750 is a better opponent because it has the same core values as the RS. That’s because it starts life as the normal, naturally aspirated, run-of-the-mill track afficionado known as the GT3RS. That is the Porsche you buy when you blush at the word “apex” and feel turbos are a poison akin to Perez Hilton. It is one of the purest driver’s cars on sale today. The Porsche 997 GT3RS is similar to the GT2RS in that it’s RWD, uses light-weight panels, wears a wing wider than Michael Phelps’ ears and was bred for track days.

But the big difference is the source its power. The GT2 is known for its prodigious turbo power, but the GT3 has always been naturally aspirated, putting out “only” 444hp.

That’s where 9ff comes in. They don’t care about purity, they only care about excitement and while 444 high-revving horsepower is exciting to some, to 9ff owner Jan Fatthauer it’s as exciting as a cheese pizza; delicious but with plenty of room for improvement. And improve he did. Pulling out the engine he strips it to the bare block and throws most of Porsche’s carefully engineered parts into the nearest wildlife preserve. To get an idea of how Fatthauer creates excitement, the pistons are made from titanium. 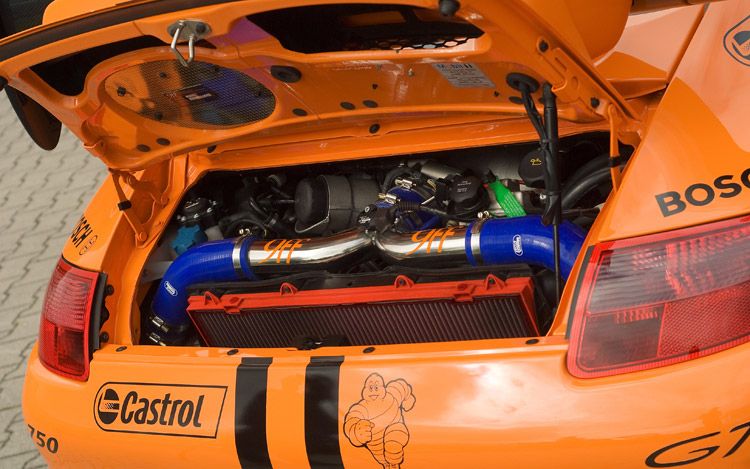 From there he installs a new fuel system, clutch, a single-mass flywheel, and.. oh yeah! Turbos. A sarcastic apology to any Quakers that offends, but to get the reliable power he wants from the 3.6 liter flat-six would be simply impossible without a few snails. After fitting the correct tabs into the right slots and bolting it down, the result is exciting…squared. 740hp, 626tq and enough thrust to have a photo finish with a Veyron. That kind of comparison gets tossed around a lot, so here’s some of that physics and math we promised: 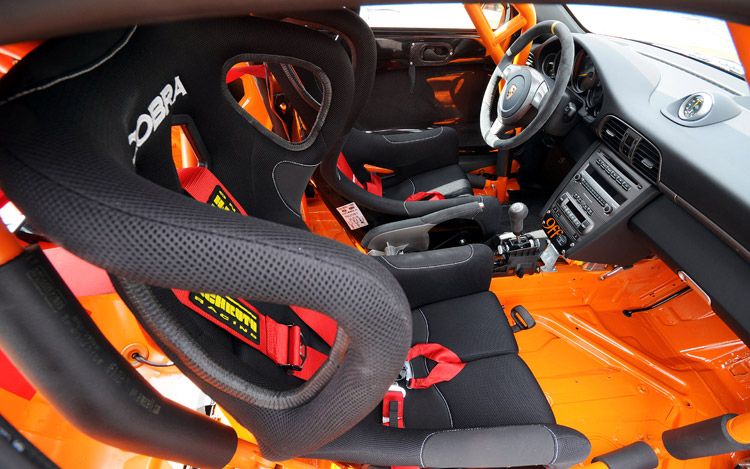 So it’s a turbo Porsche engine with big power, that’s like HPV; big whup everyone’s got it. But again, the GTurbo stays true to the “RS” roots of power and  light-weight. The stock GT3RS weighs 3,031lbs, one Olsen twin more than the GT2RS. Apparently 9ff has a hookup at Hogwart’s, because they managed to reduce the weight of the car by 220 lbs to 2,811lb. They did this by using a carbon fiber hood and carbon doors, plastic side windows and pulling out the stock seats and (ahem) center console. Some might call that cheating, but when you consider they added a full race cage, it’s clear this trainer knows how to get its fighter to drop weight. We’re impressed when someone “breaks even” after adding a cage and a charge-cooler, but 220 pounds lighter is just incredible. In fact, 9ff sees this as such a great asset, you can order the light-weight panels separately from engine package.

9ff didn’t touch much on the chassis, aside from stiffer springs to handle the increased load under acceleration, they left it alone. A new program for the stability software gets uploaded, but aside from that the GT3RS already comes well-equipped with ceramic brakes and adjustable dampers, so there was no meddling needed. The price for the 9ff GTurbo is $245,098, right in contention with the GT2RS. It even comes with a 2 year warranty.

As we researched these cars, we were surprised at just how similar they are. From the carbon fiber hoods to the roll cages, stripped interiors to picnic-bench wings the comparison is better than expected. They both come with a warranty, and their prices are practically equal. In a straight line the victory clearly goes to the 9ff, but it does have a 120hp advantage. But these cars are more about corners than they are drag races, evidenced by the GT2RS’ time of 7:18 around the Nurburgring.

The 9ff Turbo, on the other hand, hasn’t been flung around that circuit yet. Perhaps it’s because no one is brave enough; a rally driver bought one and crashed it on his first time out. 9ff declined to let us have a go, so we’ll have to use the stock GT3 RS’s time of 7:33 as a reference point. That time was done with 444hp and 3,031 lbs. The 9ff has 300 more horsepower and weighs 200lbs less. No doubt the GT2 leads the GT3 thanks to it’s copious power advantage (almost 200), so I think it’s safe to say that a car with essentially the same bits but 100hp more than the GT2 could squeak out a win. 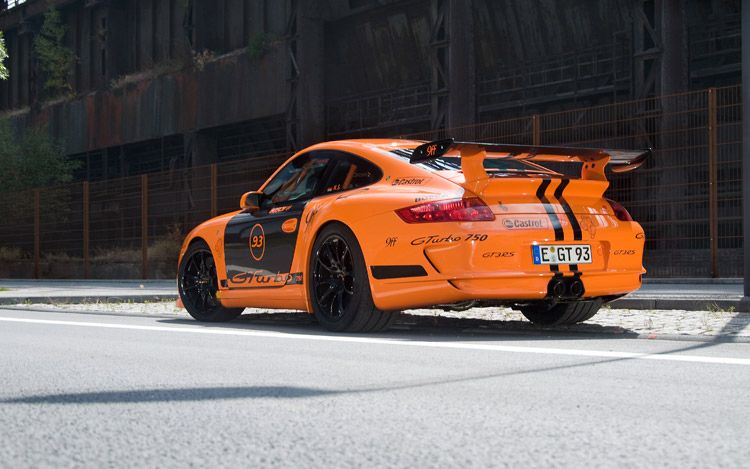 We hope you liked the first edition this segment. We’ll have more to come, with crazier combinations and more horsepower. If you think of a good match-up, post it below and leave the breakdown to us.