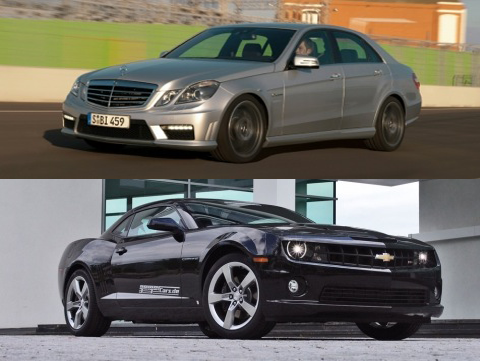 A few weeks ago the greatest show on television, Top Gear, let us down. Richard Hammond was testing the new 2010 Chevrolet Camaro SS, and not in some podunk, patriotic, Southern-cliche town in America, but on the TG test track. Rarely do we see a car from our country driven by the automotive authority that is TG, let alone one that costs 30 grand. It was all fun and games until Richard called up a car to compare it to, a “German muscle car”, which turned out to be the 2010 Mercedes E63 AMG. One of our budget-priced powerhouses was about to go up against an athletic specimen built in a laboratory using the best materials money can buy. And it lost.

We don’t think this was a fair fight, so we want to even things out. If you’re fighting a German-built super-sedan, you should use a German-built super Camaro, specifically the Geiger Cars Camaro SS Kompressor. Today we bring you a rematch of Chevrolet Camaro SS vs Mercedes E63 AMG, and this time the Camaro should get to use the same “supplements” as the Mercedes. In the summer, television is generally sub-par. “The Daily Show” is on vacation, “South Park” unfairly likes to take mid-season breaks (blasphemy) and NBC won’t be funny for at least 3 more months. The new season of Mad Men starts in 2 weeks, but our bosses don’t approve of scotch at noon so that leaves us wanting. Perhaps to repay us for that big war in the 40’s, Britain has come to save the day. The new season of Top Gear is alive and well.

Overall this TG episode was no slouch either. The boys took 3 of the best sedans ever to a closed business park and just…raced around. Who hasn’t done, er, “wanted” to do that? The cars were great, the guest was someone we’ve actually heard of, and The Stig did his job.

There was only one problem: Richard Hammond. Don’t get me wrong, we love the speed-seeking Hamster. He’s funny, under 70, and has a passion for cars that allows him to ignore silly interior niggles or a bad carpet fabric (unlike some other TG hosts). And he’s the only one that likes American muscle cars, no doubt making us distant relatives (Thankfully the height gene didn’t make it over the pond.) 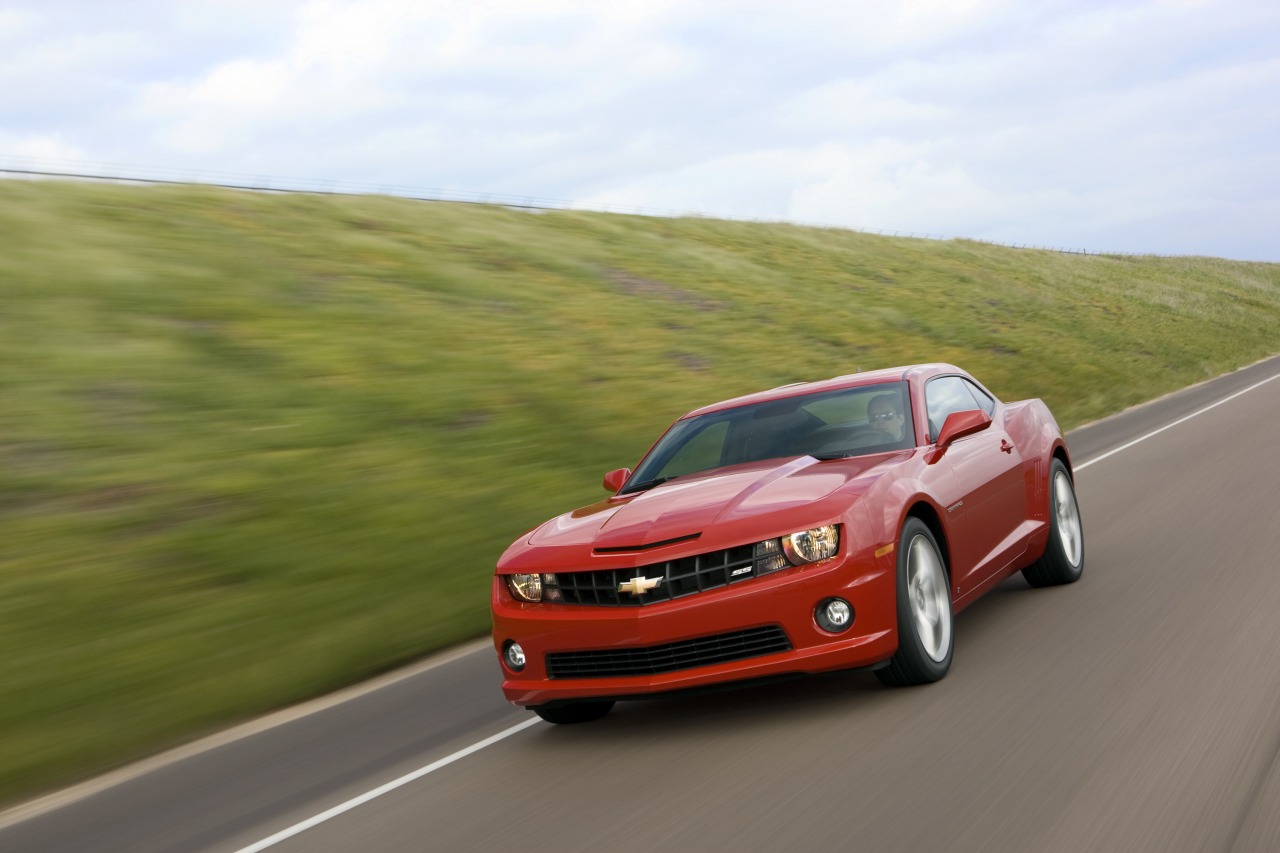 That passion for American muscle landed the 2010 Camaro SS on the Top Gear test track. “Oh sweet!” I thought to myself. It’s rare that an American car with less than 8000hp or a name not ending in “super car” lands on their track. And as informative as a magazine skid-pad number is, it’s hardly exciting. If you put the magazine on the carpet and go “Vroom” you might raise your heart-rate by 1.

I was intrigued. My brain clicked into harddrive mode, 10,000 RPMs trying to think, “What car does Germany make that could be compared to the Camaro?” Porsche was out. The closest thing BMW makes is the M3, but it’s a sports car, and costs twice as much. What would it be?

Richard’s voice dropped an octave to his “This is important.” tone and said, “The Mercedes E63 AMG.” 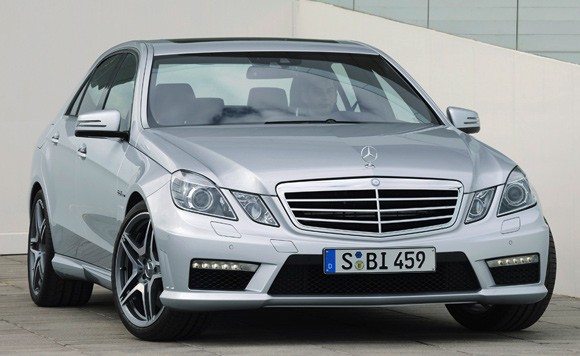 WHAT?? That’s the German “muscle car” that they think is a logical and fair competitor to the CamaroSS? This is not an international battle of muscle cars; this is comparing apples to pretzels. While we’re at it why don’t we see which is better off-road, a Range Rover or a Chrysler Town & Country? You can watch the video below to see what happened, but like seeing the name “Adam Sandler” in a movie cast lately, you can assume it was bad. It got killed on the track, the Camaro’s power lap was abysmal (not TG’s fault) and of course the AMG was better at…everything. 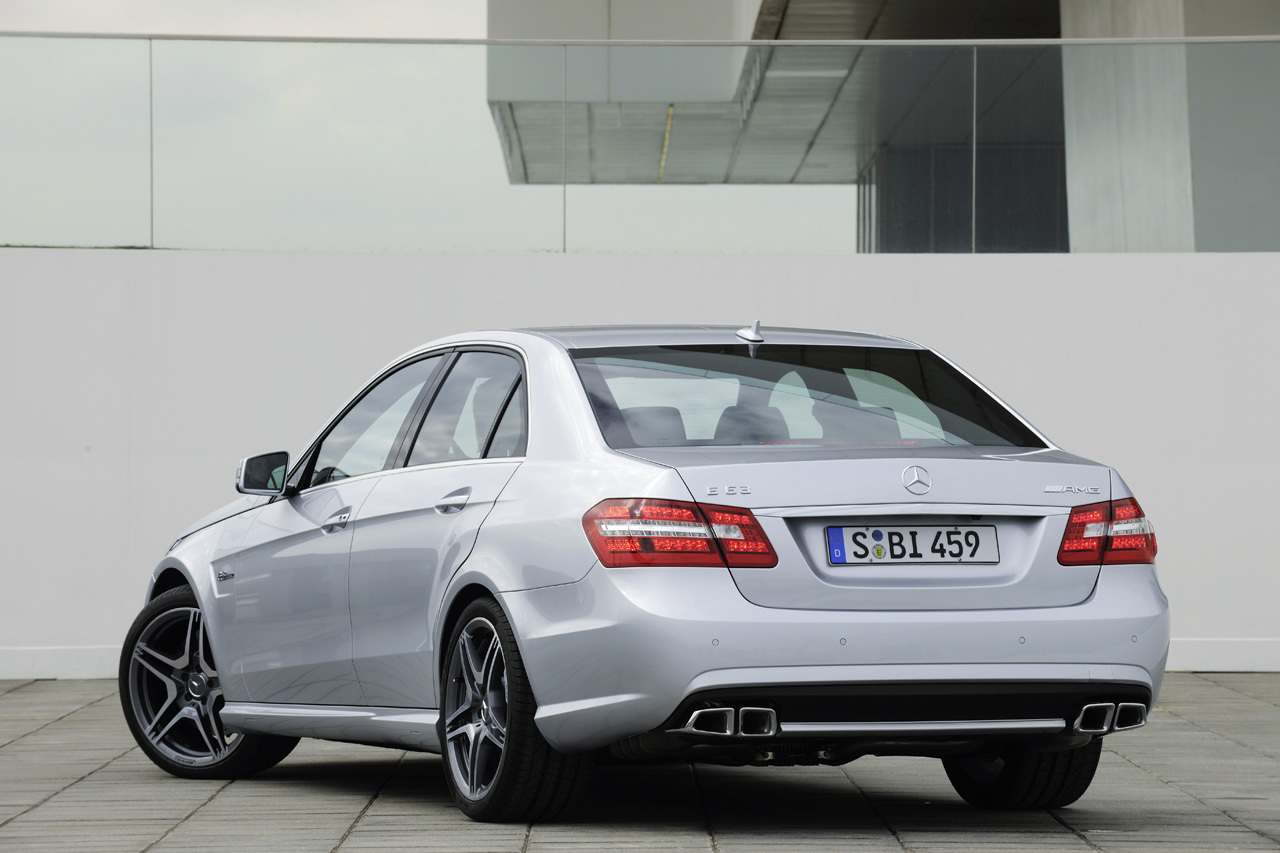 It was flat-out unfair. We’re not defending the Camaro’s lap performance, but if you’re going to compare it to another car, maybe pick one that doesn’t have a price that requires multiplication of the Camaro’s.If it was “German muscle” they wanted, they should have gone with this: 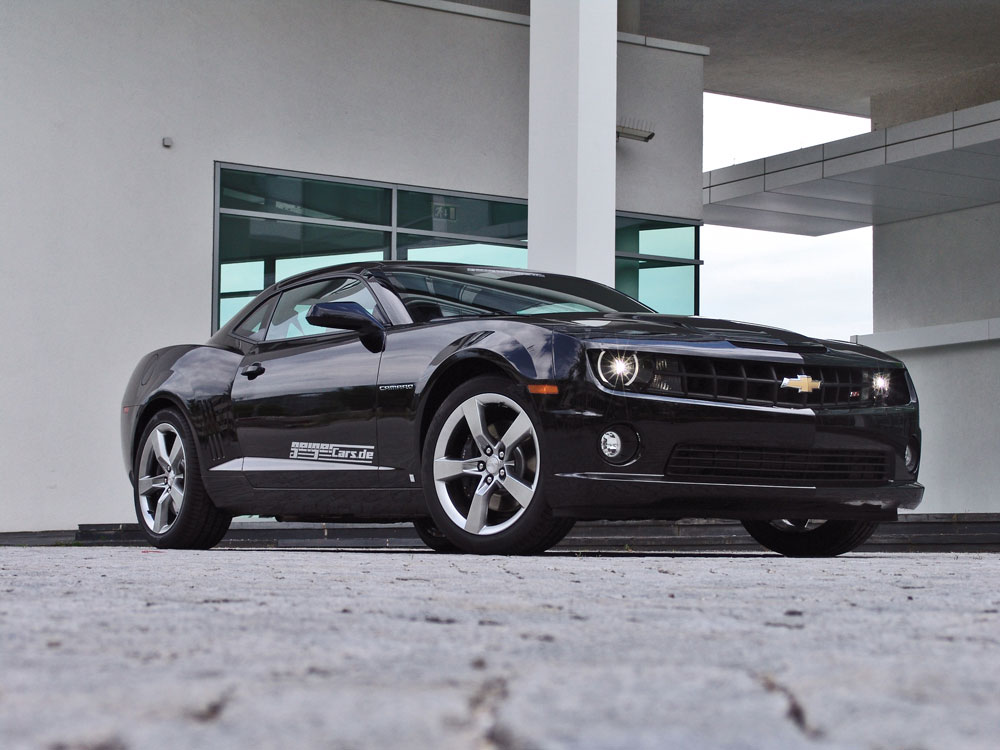 the Chevrolet Camaro SS Kompressor, built by Geiger Cars. We brought you the story on the Geiger Camaro back in August of 2008. If your German “muscle car” is one of the best sedans on the market today and requires the sale of a child for purchase, this is the Camaro I’d bring to battle. “That’s not a knife. That’s a knife.”

The E63 AMG has a 100hp advantage over a stock Camaro SS (518hp to 420hp) and more torque as well (465 to 432lb ft). Geiger evens that out with the addition of a supercharger, high-flow cats and custom mufflers. The end-product is a badass bow-tie with 568hp and 590ft lbs of torque. At full tilt on the Autobahn this boost-fed Yankee will reach 195mph, 40mph more than the neutered Benz and a speed that normally costs 6 figures. 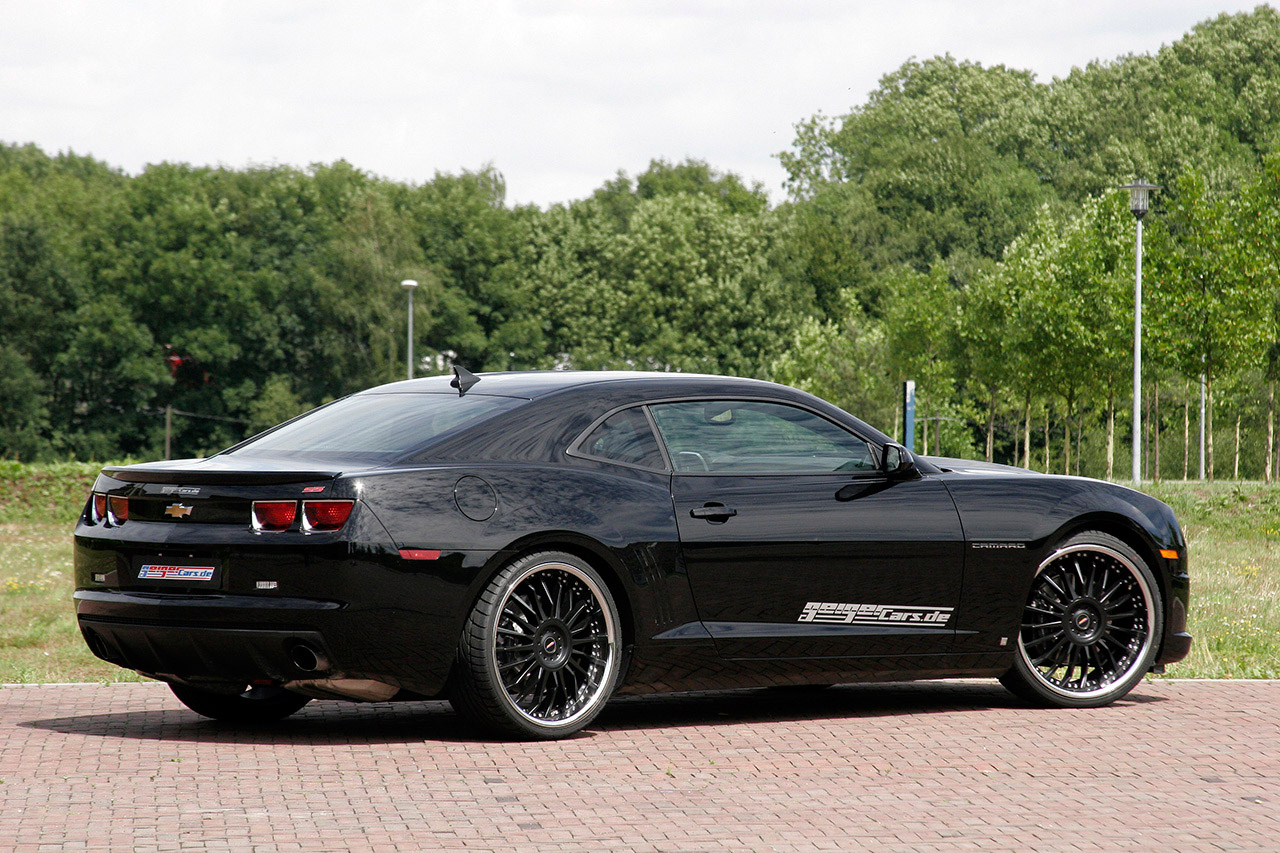 And unlike your typical Camaro SS YouTube “star” Geiger has upgraded the rest of the car accordingly. To paraphrase a great saying, with great horsepower comes great braking needs. Geiger answered with some 380mm grooved discs-bigger than the AMG’s- and 6-piston front calipers (4 rear). Thicker sway bars and coilovers mean it will corner flatter and turn-in sharper, and would probably improve the “Power Lap” time significantly.

So what would happen if the stock Camaro SS tagged out and the Geiger stepped in? There is no formal test data on the Geiger Camaro, so we can’t say for sure. Obviously a simple supercharger and some new suspension won’t raise a Chevrolet Camaro SS to the level of the E63 AMG. The E63 has been heralded as one of the best-handling sedans around today, and I believe every word. When it comes to the book on building super-sedans, Mercedes is a co-author. They probably spent millions of dollars in R&D to make the E63 drive as well as it does. Chevy on the other hand, probably spent about $50 (They’re on a tight budget). 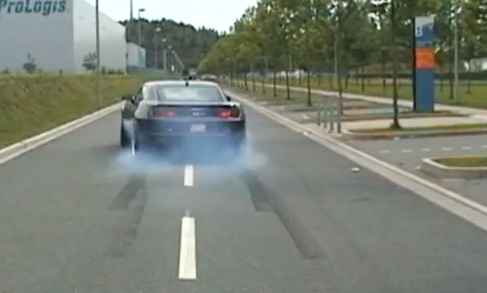 But what we will say is that in a full-throttle blast down the Top Gear airstrip, the Geiger Camaro would be more than capable of giving the E63 a scolding. “Don’t pick on my little brother” would be communicated via a thunderous roar emmitted from its two polished exhaust tips. The Camaro has a 300+ lb weight advantage. That’s a big difference, and when you add the 160 lb ft. of torque the Geiger has over the Merc, the math adds up to a win for the bow-tied Geiger.

That big torque will curl the asphalt, probably upsetting James May’s tea time in his near-by trailer. The Camaro isn’t fitted with fancy shmancy launch-control like the AMG, and tire smoke will probably be delivered in a dump truck. But once it hooks up, it will only get worse for the Mercedes. The Geiger has more power, more torque and a big weight advantage. I’d bet Mr. Hammond all the hair gel in Britain that in a straight line, this Camaro would walk away from the AMG.

Usually we don’t like “bench racing” because it’s done on an internet forum between two people that are having an internet “measuring” contest just to feed their own egos. But in this case I feel like we’re doing Batman’s work, if he were a car nerd with a blog. Top Gear is the greatest show on television, but even Shaq misses a free-throw now and then. The 2010 Camaro SS is not a fantastic driver’s car and that’s fine. But if you’re going to bring an AMG “ringer” as a comparison, we’ll come back with one of our own.

Germany’s “Chrome and Flames” TV Show Test of the Geiger: