When last year Elon Musk announced that he wanted to send one of his Tesla cars into space, the media entertained the idea of a car orbiting endlessly into the universe. But that’s precisely what the multi-talented entrepreneur chose to do with SpaceX, his lesser known company that specializes in rocket launches. The launch is planned on Tuesday, February 6, and as you read, you will probably have followed everything about it through your preferred social media platform.

Indeed, with the Heavy Rocket Launch, Elon Musk wants to shoot his favorite Tesla model, the Tesla Roadster into orbit outside the Earth. The idea somehow tickles the imagination. Where Musk embraces the dream of one of his electric cars spending millions of years in orbit in space, just outside of Mars, sci-fi enthusiasts might consider other options. What would happen if extraterrestrial life found the rocket and uncovered the car? Ultimately the question everybody wants to ask if what use is your car to a Martian?

Let’s be practical: Driving on Mars?

If you’re wondering what kind of vehicles would work on Mars, you can head to the Space Center in Houston to find out more about it. Indeed, NASA hopes to send people to Mars in the 2030s at the earliest, and consequently, they’ve been working on designing a space exploration vehicle. If you’ve been watching the Martian with Mark Watney, you might have come across a rover that looks strangely familiar to the real prototype. Designed to be solar-powered, the rover is currently planned with 12 wheels, arranged in 6 pairs of two that can rotate 360 degrees. What this means is that no rock should be able to stop it in its track. 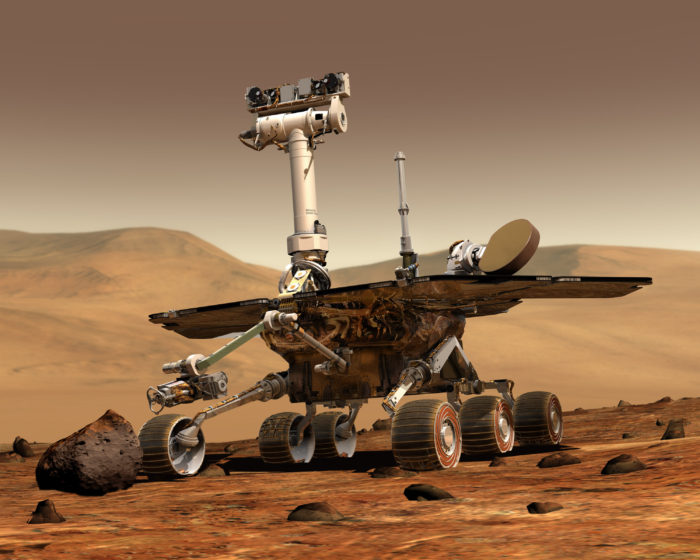 Driving on the moon

But the real question i: Would the Tesla be any use to anyone in space? The answer is that, aside from a cultural reference, no extraterrestrial life could appreciate the driving abilities of the car, especially because you’ll need more than just a battery power to get it started. Let’s ignore Mars for now, and settle for the moon, which is a closer destination. An electric engine running on hydrogen could address the fuel issues on the moon, but the Roadster’s tyres would crack on the surface. A bumpy, uneven and rocky surface is the closest you’ll get to experience your moon ride!

Apart from the excitement of combining his two passions, electric cars and rocket launches, Elon Musk can still make the most of his Tesla in orbit with smart gadgets. A powerful vehicle tracker could let him follow his Roadster as it approaches Mars and settles into an orbit position, for instance. Admittedly it would have to be pretty powerful to continue to emit signals when it’s far away from the Earth, but surely we can trust Musk to get the right technology for his car!

So, to put it simply, it’s likely that Martians won’t need Musk’s Roadster. But that doesn’t stop us from getting excited about it!