While its gestation and arrival were surrounded by controversy, Porsche’s first production sedan – the Panamera – is now firmly established as part of the German marque’s current lineup. Unfortunately for Porsche, not all buyers consider its performance to be satisfactory, even in 500hp Turbo form. Luckily for them, there are many tuners who are ready and waiting to hop up their hunchbacked Hessian hyperhatch.

One such tuner is edo competition, a respected German outfit that offers performance and cosmetic upgrades for a wide variety of European exotic and luxury cars. And Edo’s latest package for the Panamera Turbo not only serves up heaping doses of speed and style, but it also wears a name that’s sure to bring a smile to the faces of classic literature fans, Porschephiles and, er, people with the minds of 12-year-old boys alike: Moby Dick. 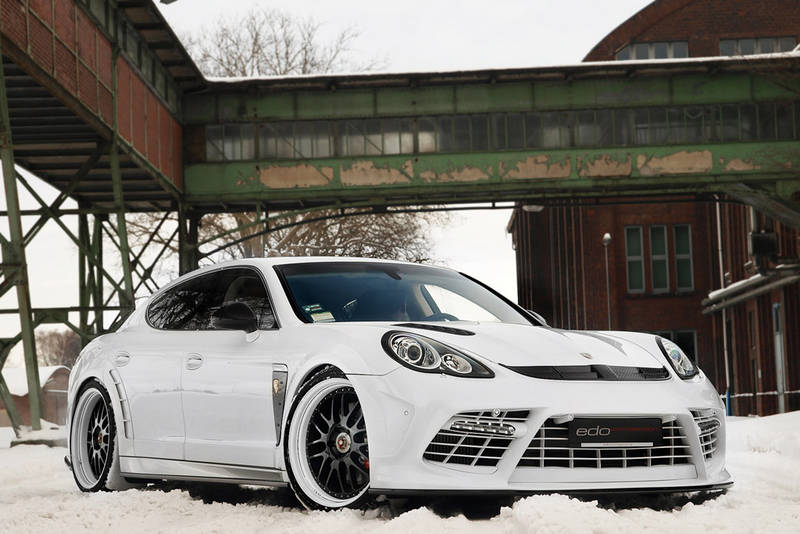 You see, Mr. Melville’s mythic white whale lent his name to the equally legendary (at least among sportscar racing fans) Porsche 935/78, a special long-nose, long-tail version of Zuffenhausen’s 935, which was itself a slant-nose, widebody derivative of the 930 Turbo designed for the FIA’s Group 5 rules and later adapted for IMSA GT and German DRM competition. Moby made his Le Mans debut in 1978 (hence the “/78” designation) wearing the colors of the Porsche factory team’s then-sponsor, Martini & Rossi. But while he won in his first outing (the 6 Hours of Silverstone earlier that year), and he was the fastest car in the field down the Mulsanne Straight (235 mph), a litany of problems meant Moby could only muster 8th place at the finish. He was retired soon afterward.

Despite that, the Moby Dick/Porsche connection still conjures up mostly good memories, and it appears that played at least some part in edo competition’s choice of name. Certainly the mostly-white body and gaping maw on the custom Mansory front fascia which is part of a body kit that also includes a unique hood, fender flares, side skirts and rear bumper does kind of remind one of an albino cetacean. Beer goggles may help, though. 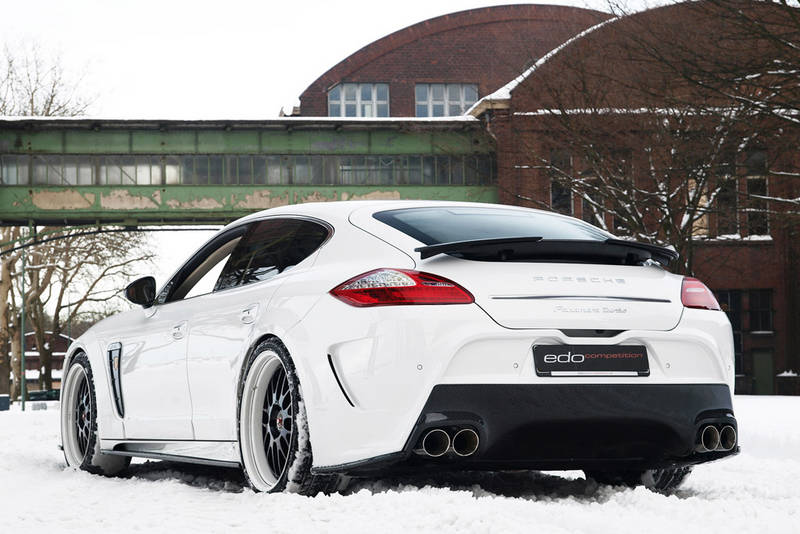 One thing you shouldn’t need assistance in noticing is just how fast this thing is. The twin-turbo 4.8L V8 has been treated to a custom exhaust system and other unspecified tweaks under the hood to boost output by a whopping 50% over stock to a just-this-side-of-loco 750hp. Once that’s passed through the 7-speed automatic transmission, all-wheel-drive system and beefy 22” wheels, it launches Moby to 62 mph in under four seconds and onward to a top speed of 211 mph. No word if a harpoon handle or three sticking out will lower that speed.

The example seen here has also had its interior retrimmed with custom wood, leather, metal and carbon fiber accents, which should serve as another reminder (along with the scenery flashing by in one continuous blur) that this is no ordinary Panamera. Of course, the fatter-than-normal monthly payments would serve as another reminder, though just how much fatter, Edo isn’t saying. Thankfully, though, edo competition does accept funds sent via Ish-mail. (Wow, that was bad. Won’t happen again, we promise.)