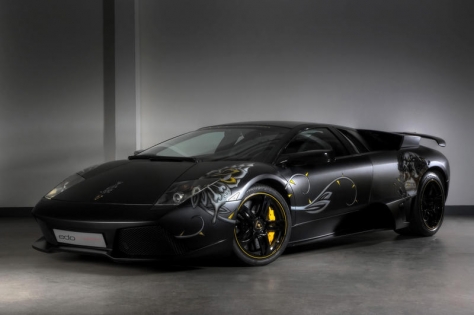 Increasingly over the last couple years, Christian Audigier designs have appeared on everything from Ed Hardy apparel to cars such as the Smart For Two. Now, the fashion designer has teamed up with high-end tuner edo competition to go further up market. The partnership has resulted in the edo competition Lamborghini Murcielago LP 710 Audigier. Only 5 units will be produced at a cost of $690,000+.

The car is instantly recognizable from it’s black matte paint job and intricate tattoo inspired graphics, Audigier’s claim to fame. The limited production run, which by it’s very nature ensures exclusivity, is further sweetened by the fact that the exterior graphics for each vehicle is also individualized.

On the interior, Audigier’s hand-stitching accents are present througout, from the dash, which is trimmed in leather to the interior panels. The driver’s seat features Audigier’s signature and a flaming skull graphic, hopefully not a pervayer of things to come, when pushing this supercar at crazy speeds.

All the attention to Audigier should in no way detract from the fact that this is a Lamborghini tuned by edo competition, a company known for some serious juicing. Horsepower is boosted to 710 bph with torque at a dizzying 516 ft-lb. Speed estimates put the car’s upper limit north of 224 mph. The tuning expert has also done some remarkable conversions, switching the car to RWD (not a factory option) as well as introducing a single-disc clutch. One things for sure, the edo competition Lamborghini Marcielago LP 710 Audigier is not for everyone, but for those with a passion for tattoo art and culture and some serious performance, it will surely be a prize possesion to it’s new owner.